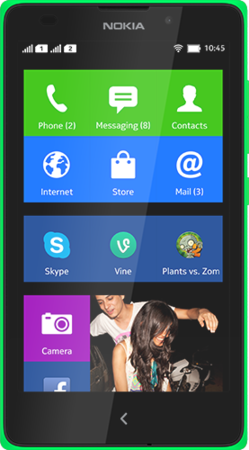 The smartphone runs Nokia X platform for the OS and has a 5-inch display. That screen is large, but its specs show that it is a device designed for budget shoppers. The screen has a resolution of 800 x 480, many screens of that size on smartphones are full HD. The Nokia XL does support 24-bit color, and the screen has 187ppi.

On a 2G network, it promises 16 hours of use from its 2000 mAh internal battery. The phone will give 13h of talk on a 3G network. The XL uses a QUALCOMM Snapdragon S4 at 1GHz with dual cores. It has 768MB of RAM and 4GB of internal storage with a memory card slot for expansion. The rear camera is a 5MP unit and the front camera is a 2MP unit. The phone has GPS built-in. The Nokia XL will launch in Asia-Pacific, Europe, India, Latin America, the Middle East, and Africa in Q2 for 109 EUR.