We know that Motorola and Google are going to unveil the Moto X smartphone on August 1 in New York City, but now we have more of an idea of what to expect to be baked into Motorola's highly anticipated smartphone. 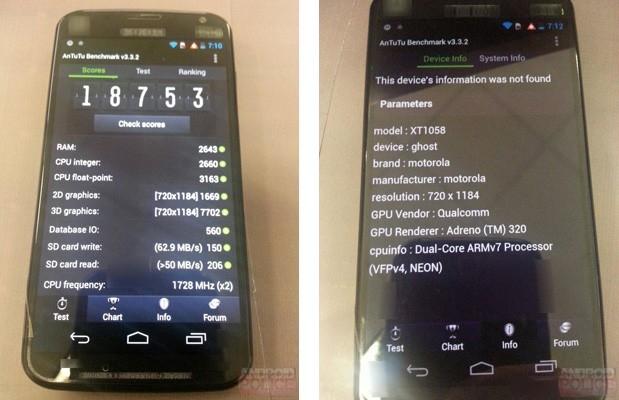 I knew we weren't to expect anything in terms of a high-end handset, but I was hoping for something special at least. But according to Android Police, who have some photos of the AT&T Moto X "Ghost" which ran the AnTuTu and 3DMark tests. These results from the Moto X aren't that surprising, but we know it will arrive as a mid-range Android 4.2.2-based smartphone.

Inside the Moto X, we should expect a 1.7GHz dual-core Snapdragon S4 Pro, 2GB of RAM and a 720p screen. 16GB of on-board flash storage will be on offer, as will NFC. As for the cameras, we should expect a 10.5-megapixel rear-facer and a 2.1-megapixel front-facing camera. As you can see, there's nothing to get crazy about, but we might not be seeing the whole picture here, either.

If Google and Motorola could offer this at $299, they could have something great on their hands. If they unveil it with Android 4.3, and something magic like Google Now, again, it would be something special. Right now, it looks like a mid-range smartphone.