All NewsBusiness, Financial & LegalCases, Cooling & PSUContests & GiveawaysCPU, APU & ChipsetsDealsDisplays & ProjectorsGamingMotherboardsScience, Space & RoboticsStorageVideo CardsVirtual & Augmented Reality
All ReviewsAll ArticlesAudio, Sound & SpeakersCases, Cooling & PSUCPUs, Chipsets & SoCsComputer SystemsDisplays & ProjectorsGamingMotherboardsNetworkingPeripheralsStorageVideo Cards
GuidesGamingAsk the ExpertsNewsletterAboutForums
RTX 4090Windows 11Halo InfiniteBattlefield 2042Elon MuskGTA 6RTX 3080HDMI 2.1
Peripherals
If you have a bunch of HDDs or SSDs around your home or office that you don't want to throw away, but you lack the space to put them into your computer you need a HDD dock. Sharkoon is famous for its docking stations for SATA HDDs and SSDs and the company has unveiled a new docking station aimed at notebook users with small mobile hard drives they want to access on the go. 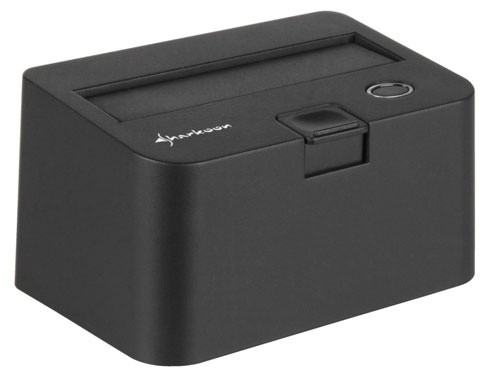 The new docking stations are called the QuickPort Mini for 2.5-inch SATA HDDs or SSDs. The dock can be had with either a USB 2.0 port or a USB 3.0 port. The USB 3.0 version is backwards compatible with USB 2.0 ports so if you want the most flexibility that is the version to get. Both versions measure in at 85mm x 55mm x 45mm and are sized to be easily portable in a notebook bag or backpack.

The docks have a plug-in slot for the thin 2.5-inch drives and have an eject button to remove the drive quickly from the dock. An LED on top of the dock shows when the drive is transferring data. Both versions of the dock come with the cable needed to get connectivity and all the power the docks need for operation comes from the USB port. The USB 2.0 dock will sell for 9.99 euro and the USB 3.0 dock is 24.90 euro.
NEWS SOURCE:sharkoon.com