This new powerhouse will be the first ever mATX board to carry the Republic of Gamers tag and will features an X58 chipset complete with SLI (with room for dual slot coolers).

The Rampage II GENE also sports six RAM slots with support for up to 24GB of RAM, six SATA 3G ports, 12 USB ports, and a ton of other features.

There is no word on availability as of this writing. 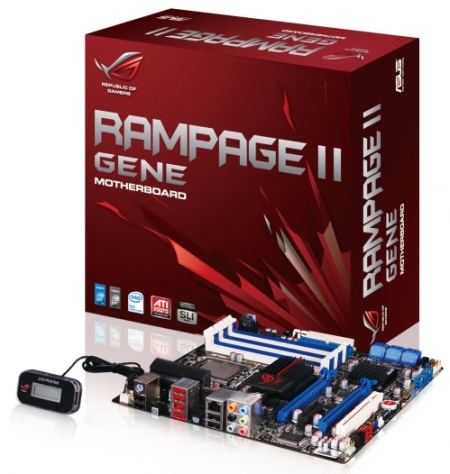 Specifications are pretty much well known as there were a lot of talk about this motherboard. It is based on Intel's X58/ICH10R chipset, has six memory slots with support for up to 24GB of DDR3 memory, two PCI-Express 2.0 x16 slots, one PCI-e 2.0 x4 and one plain PCI slot, seven SATA 3.0Gbps and one eSATA port, integrated SupremeFX X-Fi 8-channel audio with EAX 4.0 support, one Gigabit LAN port, twelve USB 2.0 and two Firewire ports and bunch of features taken from the Rampage II Extreme motherboard.

This GENE mATX motherboard looks like a great catch for those portable LAN gaming systems, but we are still waiting to see it listed at European retail/e-tail stores. DFI will also have mini LAN Party X58 challenger