Gizmodo ran a good number of tests and filmed each one to show the actual performance. They even played a quick game of touch air-hockey. In all they found the performance of Windows 7's touch functions to work well on the TouchSmart.

I am wondering what will happen now that Apple has a patent on Multi-Touch. Will this mean the death of Multi-Touch in Windows 7? Or will we just see a rise on the cost of Windows 7 to pay Apple for the "right" to use it. 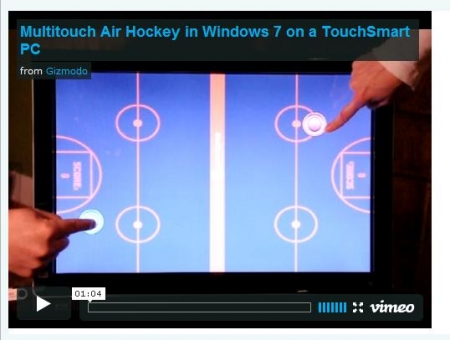 In case you were wondering, I installed Windows 7 Beta in two ways on the TouchSmart PC, both which had different advantages. First, I upgraded from Vista, keeping all the drivers, etc. intact. Though I was able to get going quickly, the experience was hampered by touch software that HP ran on top of Vista. To get at the control that come native in Windows 7-which I highlight above-I had to partition the drive and do a clean install. Though I had to gather up some drivers and install them manually with some trickery, I got the more honest Windows 7 touch and multitouch experience.

I am happy that HP is pushing its TouchSmart platform to consumers with such enthusiasm, and I'm happy that Microsoft decided to weave touch into the fabric of its OS. One day we may even take it for granted, like keyboards and mice now. The real question is, what will developers do?
I'm going to spend the next few days investigating more touch and multitouch applications and interfaces, because while Microsoft and HP should be praised for supplying the capabilities, the goodness will come in what developers do with them.