Dark Souls III (our full review) is an evolution of the Souls franchise of games, bringing significant, if slight, changes to the overall theme of dread and hopelessness with a much more smooth gameplay experience. If played on the harder setting, it can still be one of the most frustrating games to play when enemies are taken head-on. Most exciting, however, are the graphical changes as it further evolves the Bloodborne engine, as we'll call it, that's used by From Software. 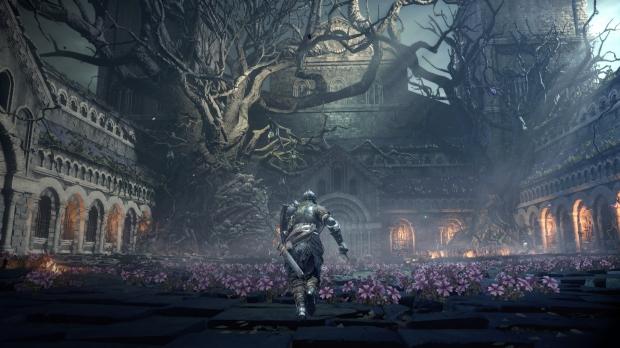 We see From Software use the momentum taken from the Dark Souls II remaster, and they've applied it very effectively. It's a dark time for the Ashen One, but thankfully the newly minted specular mapping and physically-based lighting system makes things rather sparkling and bright when compared to previous games.

Thankfully, light is handled in a more physically real manner, in that materials diffuse light far more realistically based on the type of material they are. They've also seen fit to widen the use of their physics engine so that flags and other things in the backdrop are a bit more lifelike, adding a visceral feel to it all. In movement, and in pictures, it can all be very impressive looking.

The engine is a very capable one and From Software has had great success with it thus far. They've used a middleware that adds in motion-blur on a per-pixel basis, chromatic aberration, and depth of field that looks great and adds an overall cinematic feel to the game, which works well given the genre and dark trappings.

Unfortunately, it's limited to only 60FPS on PC despite the fact that hardware being available that can easily play the game at well above that, even with post processed AA turned all the way up, at 1080p and perhaps even above. That limit, then, is arbitrary and could potentially be removed in a future update, though it's never quite that simple in development. 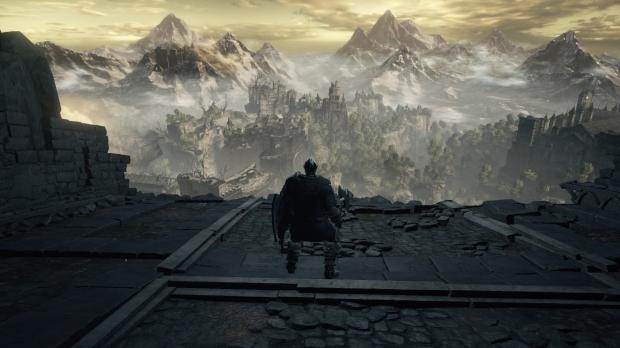 Cutting heads off in 4K has never looked so good

It was relatively straightforward benchmarking Dark Souls III. It, not being a Window Store game, means that it doesn't have the inherent issues that that ecosystem brings with it. Overall, there were no significant problems that were the direct result of either GPU vendor or of their respective drivers. Crashes did happen, and sometimes in-game glitches became incredibly frustrating, but the game's engine remained gorgeous throughout.

Even with everything turned all the way up to its absolute maximum, it's expected that it should run relatively fast all the way down the line of GPU's. It's demanding, but not terribly so at such resolutions for modern GPU's. To test, we took a stroll through the Boreal Valley, making sure to try our hardest not to die along the way. 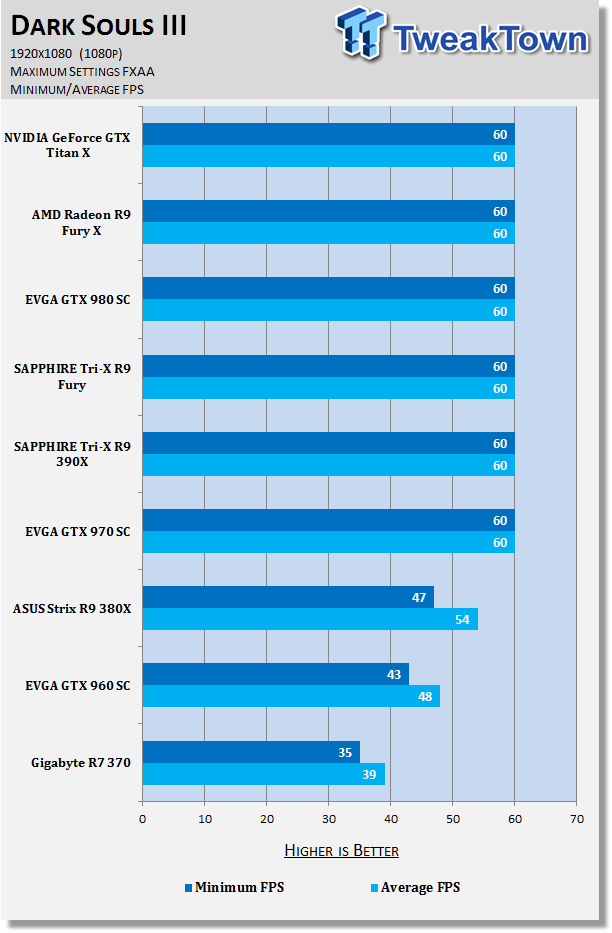 With the artificial limit in place, we see from the GTX 970 on up doing incredibly well and driving right up to the limiter throughout. It was incredibly smooth and acceptable all the way down to the R7 370. VRAM usage on the Fury X and Titan X maxed out at 1726 and 2249MB, respectively. It looks good, and it plays well. It's certainly very shiny. 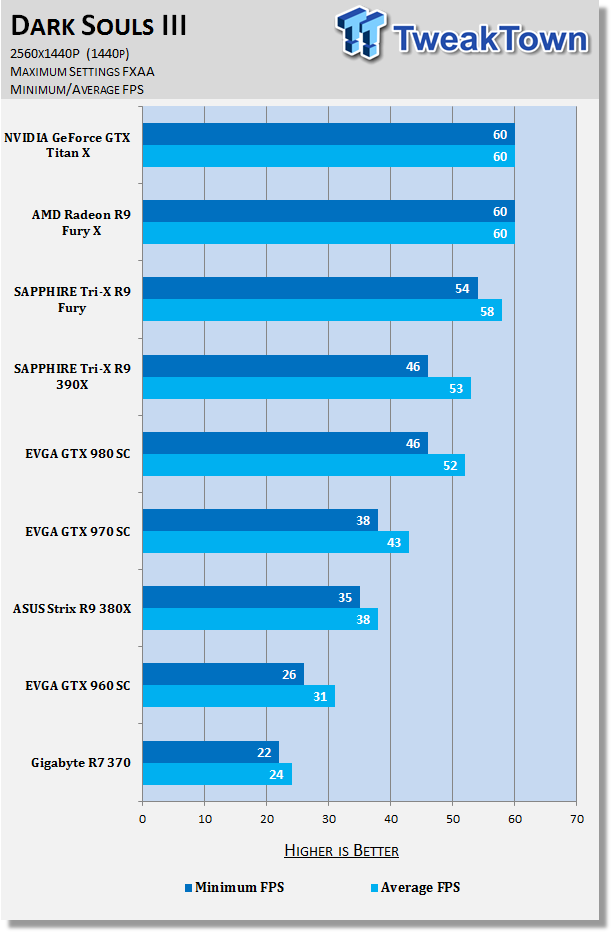 Moving on to 1440p, we see that only AMD's Fury X and NVIDIA's Titan X are capable of keeping things constantly running at 60FPS. They hit the wall and stay there. Those framerates were relatively consistent throughout, as well. The R7 370 is no longer suitable at this resolution, with the dip becoming too much for it to be truly playable. The 960, on the other hand, does fairly well and is still running strong at maximum settings. Just on the cusp of being unplayable.

VRAM usable climbs somewhat to 2319 and 2748 for the Fury X and Titan X, respectively; not nearly filling up the VRAM at this point. So far it seems to manage memory far better than some other recent games. 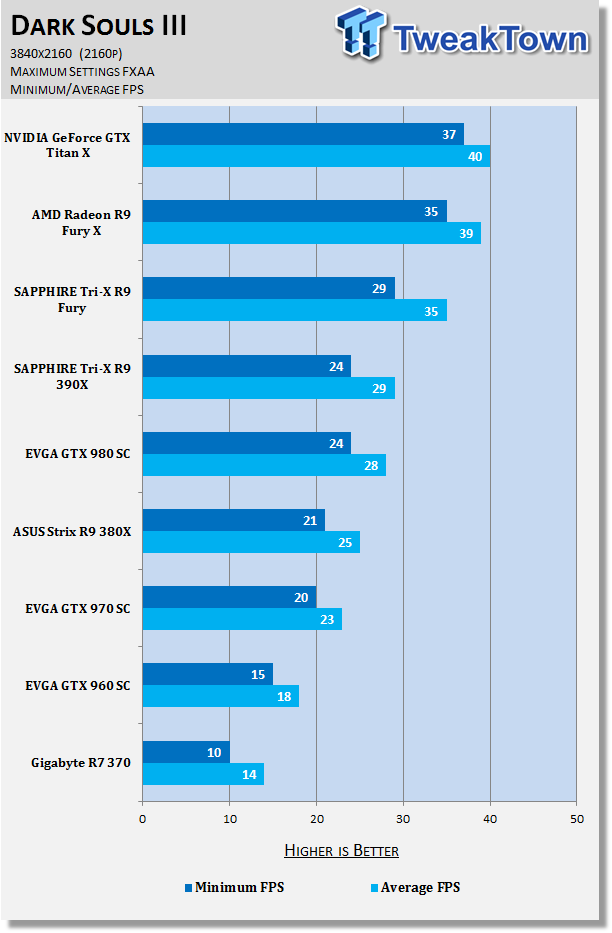 4K helps to make this game look good. It's incredible how much more breathtaking that Dark Souls III is at this resolution. Photos, and even videos, don't quite do it justice. Regardless of how great it looks, even a single Titan X and Fury X have some difficulty here. Although with a 37 and 35FPS minimum, respectively, it's still quite enjoyable and running faster than it does on the Xbox One.

At 4K, the cutoff point is a GTX 980. Anything below that wouldn't be doable at maximum settings. At slightly less than maximum it might be doable, however.

VRAM usage has increased dramatically to 3256 and 4294MB for the Fury X and the Titan X, respectively. That's still very acceptable, and it doesn't even begin to approach the point of swapping into system memory or, god forbid, into the HDD swap space.

Graphically, Dark Souls III is a very impressive game. It really is a nice evolution of the Bloodborne Engine that makes use of a larger color palette and a much-improved lighting system that rivals those available in other modern game engines, such as Frostbite and even Unreal Engine 4.

Memory management, perhaps due to the level of care taken while porting this onto the PC, is spectacular. This is one of the best examples of how to manage memory. The massive textures and effects could theoretically commit to the entire available pool, but the game doesn't do that. VRAM usage is very low. Even more than that, the game just looks great, and the aesthetic is a lot of fun to play in as well. Despite some game crashing bugs, that aren't specifically graphically related, it's also quite the fun game to play as well.

Be sure to let us know how your system runs with Dark Souls III and if you see any other issues we haven't quite come across yet.