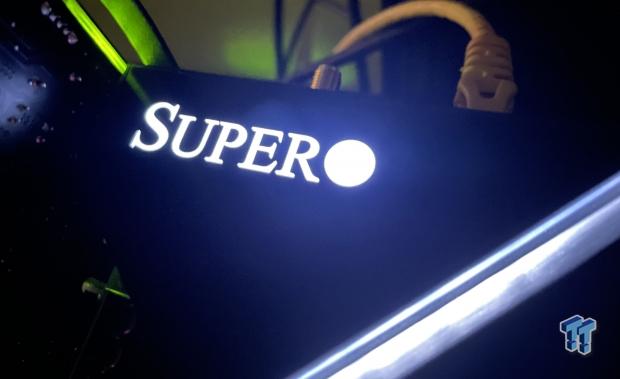 Late last year, we partnered with Supermicro to do a complete build guide with their C9Z490-PGW, culminating in an epic giveaway for one of our lucky readers. With the launch of Intel Z590 platforms earlier in the year, we recently got our hands-on the Supermicro platform and decided to put together yet another build guide with parts we had in house. The idea behind this guide is to up the ante, go for 1440p 100FPS+ with a target of 120FPS in every game or even better 144!

Going for 1440p will make this build high-end in nature, but I'm looking to keep the price as low as possible while leaving headroom for overclocking and tuning the GPU if needed. That said, parts are still hard to find, and prices keep going up with no end in sight; while I'm going to use MSRP for the guide, we will discuss current market pricing for each component as well. Let us check out the hardware. 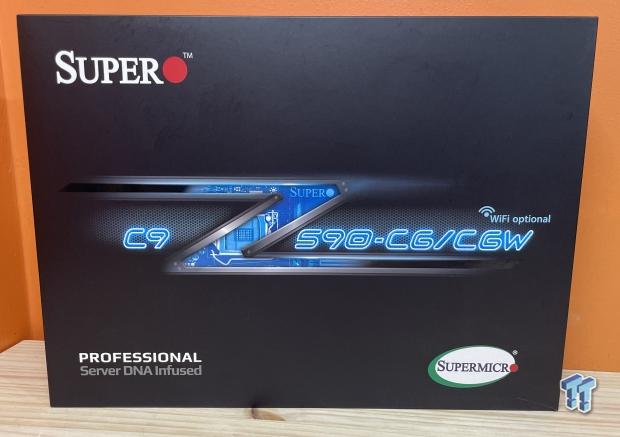 Supermicro has become known for its reliable platforms that offer consistently high performance. This includes 27 world records across all motherboard platforms; in fact, their Z490 platform set an overclocking world record reaching 7548.15MHz on 10th Gen Intel 10900K, and they expect this new Z590 to be just as good due to their server infused quality. 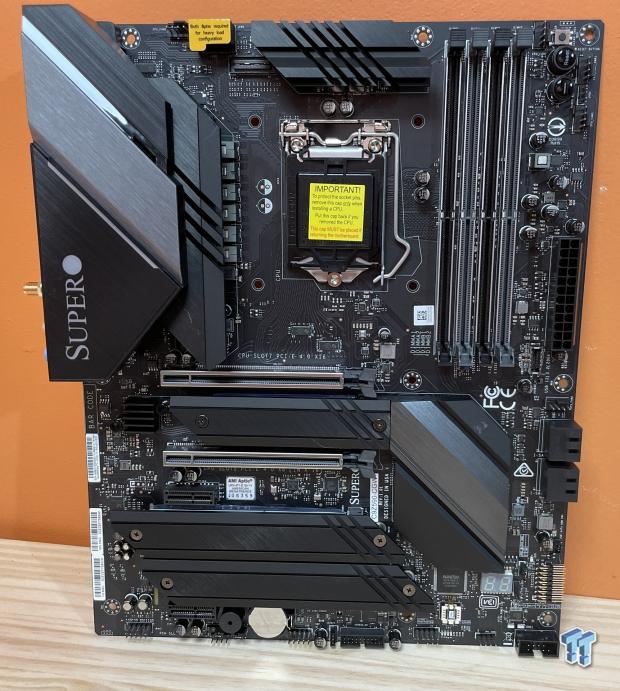 Getting a quick look at the board, the Supermicro Z590 carries a relatively simple layout with a dark aesthetic similar to the Z490 from last year. The VRM and M.2 slots and components are heatsinked individually, as is the chipset. This board supports PCIe Gen4, and the top two shielded slots are Gen4 compliant and support a single x16 configuration or split x8 x8 config-if both are used while one m.2 slot is Gen4 with included support for Intel Optane and RST premium. 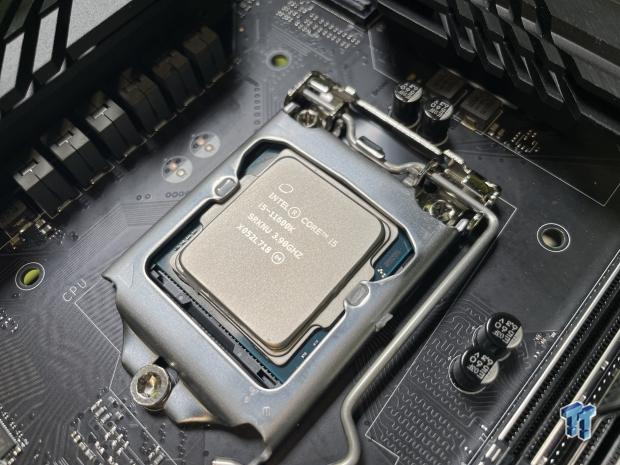 For this guide, we need to cut corners where it will make the most sense, and the CPU is one of the most straightforward cuts to make without taking considerable hits to gaming performance. That said, for this guide, we are deploying the Core i5 11600K, the 6C12T Rocket Lake S variant that supports a 3.9GHz base clock and 4.9GHz boost. You can pick this CPU up any nearly every retailer; Amazon is kicking them out the door at $264.99 as I write this.

I've preached connectivity on Z590, and no one is doing it better than Supermicro with this C9-Z590-CGW. It all starts with massive USB connectivity that includes two USB-C that offer 20Gbps throughput and two more 10Gbps ports in red. Network connectivity is supreme on the SuperO, with i219v from Intel covering the red port with massive throughput going to the 10Gbe port in black, adding to this Wi-Fi 6 make for a well-rounded platform. 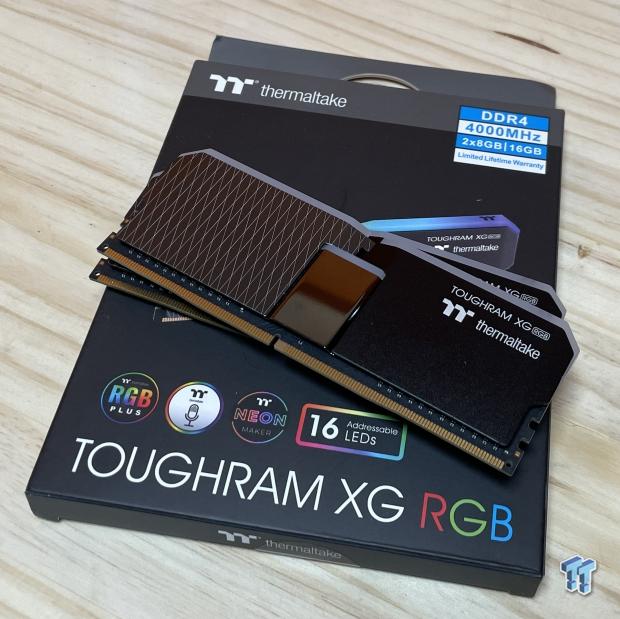 I've yet to use Thermaltake Toughram in all my years as a nerd, and it's garnered some hype over the last few years as great overclocking memory using Hynix DJR ICs, so no better time than now to put it to the test. This memory retails for ~$184 for this 16GB kit which seems to be on the lower-end when compared to other RGB enabled kits. 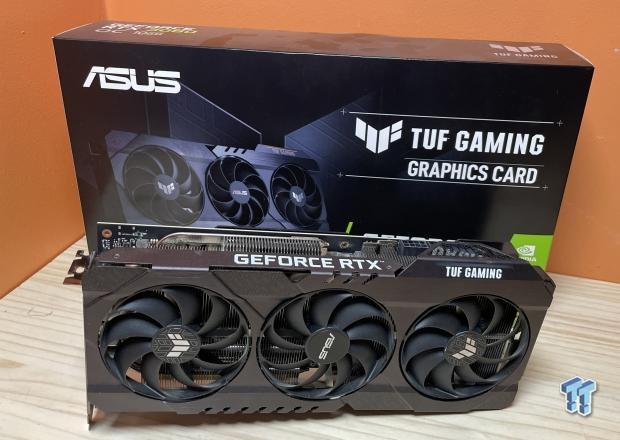 GPU is going to be the most expensive component, as MSRP is already $699 for the Founder Edition, and we are going with the ASUS TUF RTX 3080 OC, which has recently had a price increase to $849, but this GPU will enable us to hit our goal of 120FPS+ at 1440p 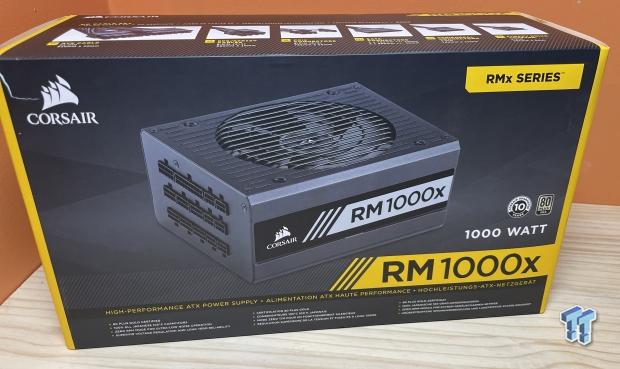 To power this system, I didn't want to skimp, and my two options were the Corsair RM750x or this RM1000x fresh from our Rocket Lake S launch day reviews. With the additional power draw of RLS, it's best not to chance it, especially with the RTX 3080 OC in tow, so we're going with the 1000w for the sake of more headroom. This PSU retails for ~$300 US on amazon, but I did find it a bit cheaper, $285 on Newegg. 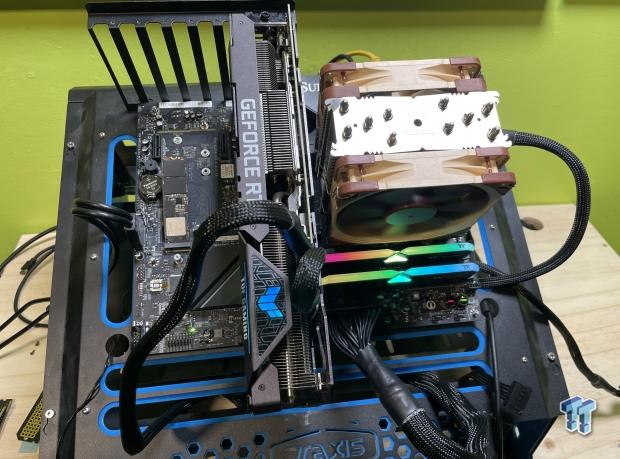 The Core i5-11600K doesn't need near the cooling of its big brother 11900K, so we chose a relatively simple cooling solution for this guide; the Noctua NH-U12A. This cooler is going for $109 on amazon currently, but a few etailers are showing prices much lower, near $70.

Building this machine, I put it all together on my Primochill Wetbench just because it's quick, and the chassis really should follow your own tastes in design and lighting. 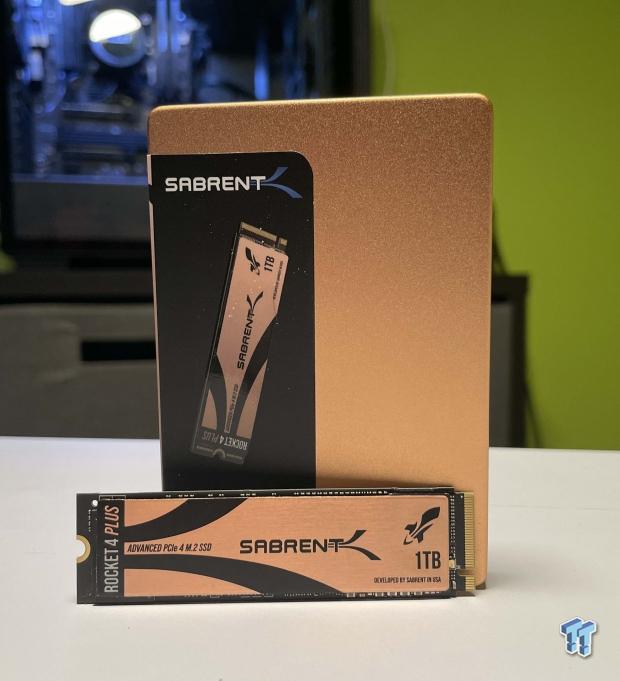 To be honest, you can really cut corners here with the NVMe and go with a DRAMless solution and still get some pretty decent performance for a gaming build. That said, I didn't want to build on Z590 without taking advantage of Gen4, so I chose the Sabrent Rocket 4 Plus in the 1TB configuration. This NVMe solution is currently going for $199.99. 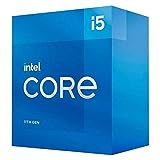 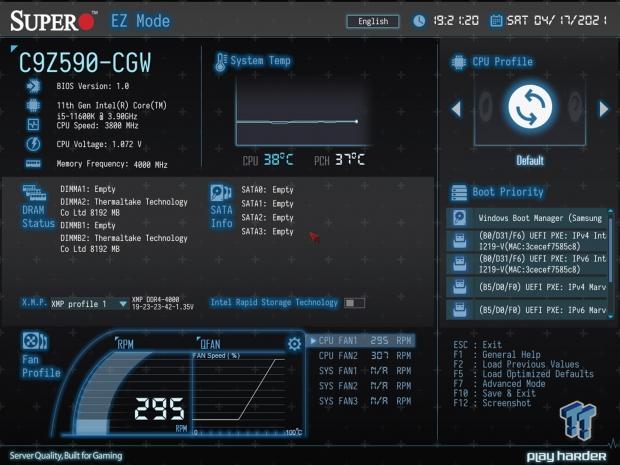 First boot, we head into BIOS to configure XMP for the memory and let the system run for a few minutes, watching temperatures before we move into installing Windows 10 on this machine. Memory has no issues running the initial XMP profile of 4000MHz CL19 1.35v, and the CPU is running defaults at 1.072v in BIOS with good temps.

Windows 10 install took only a few minutes as I cloned a bare Windows 10 OS that I use for motherboards reviews to the Sabrent drive. After initial drivers are installed, and Windows updates are taken care of, we head to CPUz to ensure the system is running as intended. Off the bat, everything looks pretty normal; the CPU is showing typical base, boost operating with the CPU hovering at its single-core boost clock of 4.9GHz. Later on, we will tune this and see if we can push the clock higher and drop the voltage. Memory, on the other hand, is running 4000MHz as expected CL19 gear one at 1.35v. 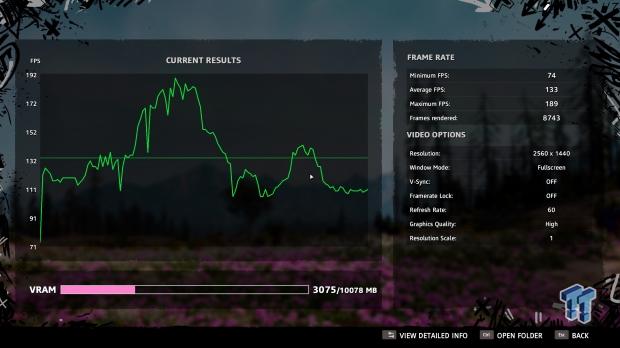 With this being a gaming build, I ran through several games I have installed for motherboard reviews; the first is Far Cry New Dawn. At 1440p, High settings, we see an average framerate of 132FPS, plenty for our initial goal of 120FPS but just shy of the 144Hz we want to see. 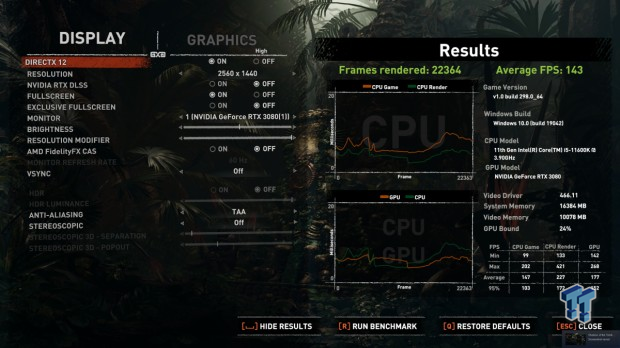 The second gaming scenario I used was Shadow of the Tomb Raider. We nearly hit our overall goal of 144FPS the first try coming up just short at 143 FPS average. We were on high settings for this benchmark at 1440p. 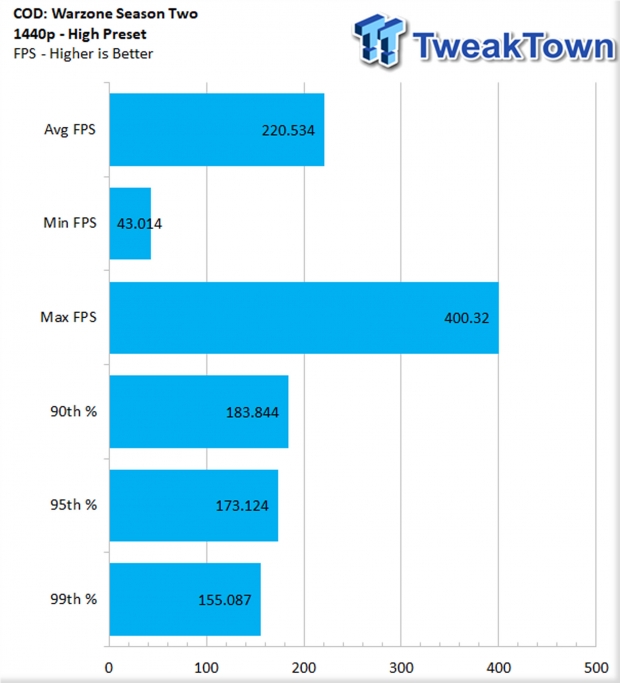 I used NVIDIA FrameView to record a few sessions of Warzone, then averaged them for the chart above. As you can see, we hit peaks of 400FPS with an average around 220 FPS. 99th percentile results show a solid 155 FPS meaning we are likely good without tuning for this title, but we will need to tune to reach better FPS for Far Cry, so we will retest here as well. 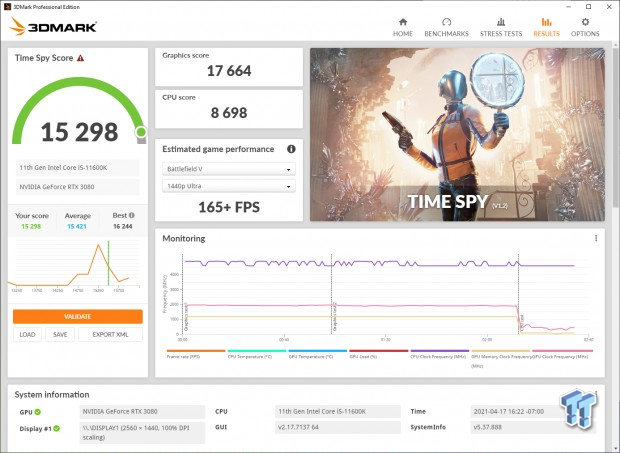 Last, I ran through 3DMark Timespy because they do offer FPS insights along with your system score. According to Futuremark, our system should be set for 165FPS+ in BFV 1440p Ultra settings. 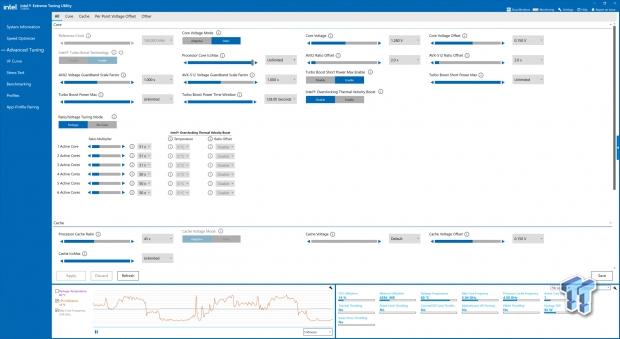 Starting our tuning phase, we used Intel XTU to get an idea of where the CPU could run while in windows. I find this the easiest method because you can run a benchmark in the background while moving voltages and clocks to see where it will fail. We quickly discovered our CPU would run 5GHZ all core pretty easy at 1.45v, and with the Noctua cooling it, temps were a bit high at load but within limits of the silicon. 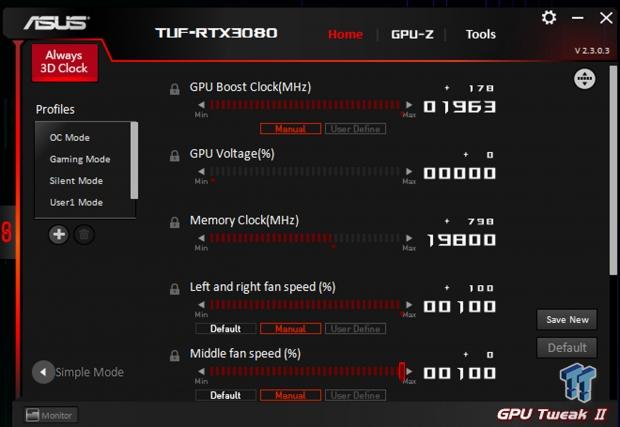 For the GPU, I used an ASUS tool called GPU Tweak. This allowed me to dial up the clock on the TUF RTX 3080 to +800 on the memory and +175 on the core. This should give us the boost we need to reach a stable 144FPS in all gaming scenarios.

Tuning complete, we have a 5GHz all-core on our 11600K at 1.45v, and the RTX 3080 has a decent boost to its clocks as well. We didn't fiddle with memory too much on this board apart from setting XMP in BIOS. 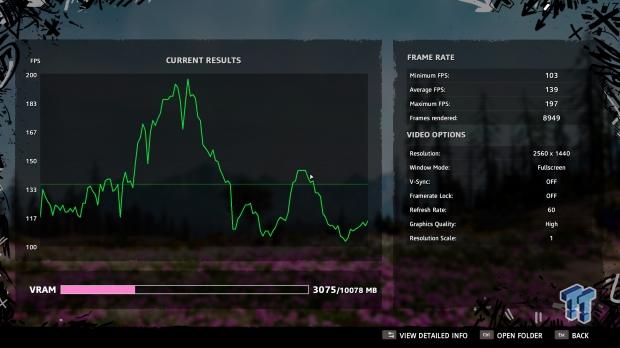 After our tune was complete, we started our second testing phase with FCND. In this benchmark, we were able to tack on an additional 6 FPS on average to get us a little closer to the 144FPS target. 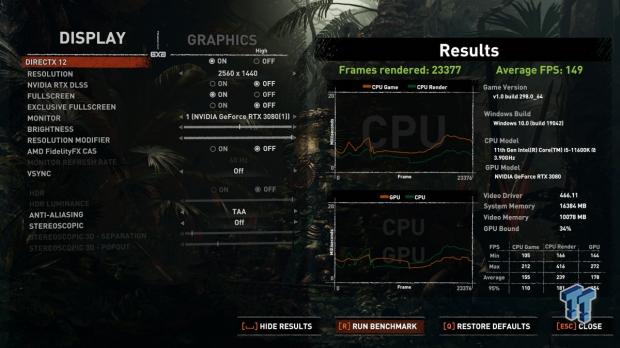 Back to Tomb Raider, we once again picked up 6FPS in this game to reach 149 FPS average. 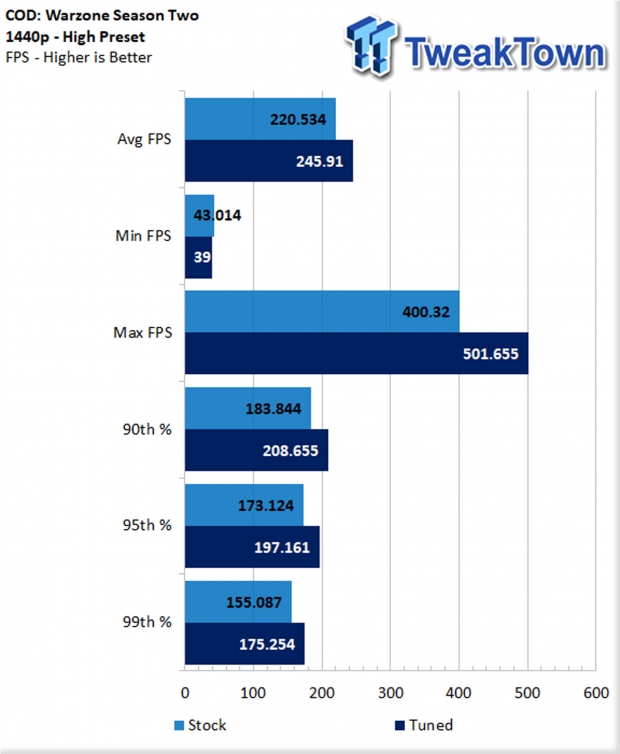 Warzone showed the most significant gain from our tuning, picking up an impressive 20FPS to reach 175 FPS in 99th percentile and 245FPS average. 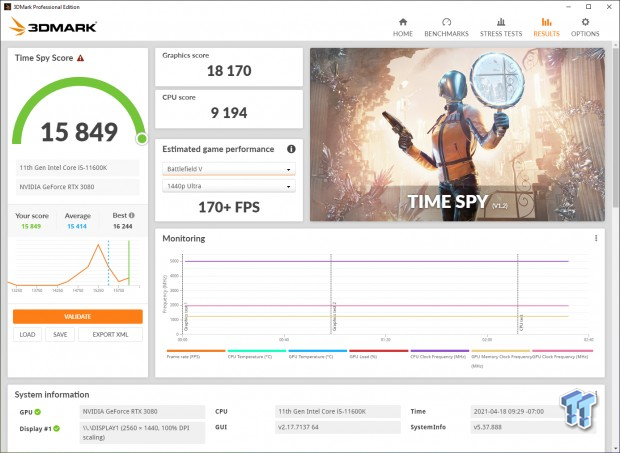 3DMark Timespy picked up about 600 points overall, 500 points in CPU score, and another 500 in GPU as well. 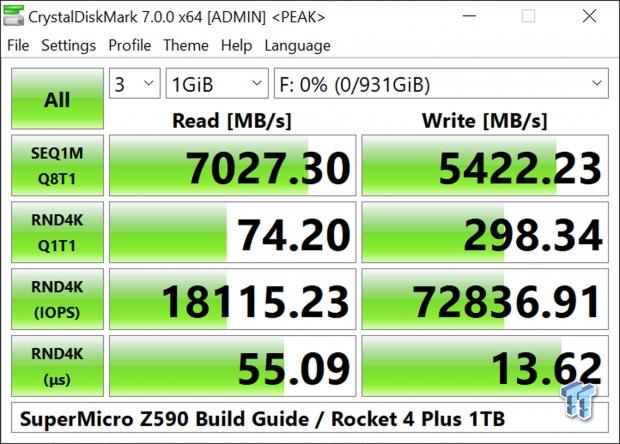 Last, we checked our storage performance because no gaming rig is complete without solid load times. For this build guide, we used the Rocket 4 Plus and came away with 74 MB/s read and 298 MB/s write where it counts, 4KQ1.

Now there are places where we can cut the cost even more for this build. As I stated in the article, you don't necessarily need Gen4 NVMe to get amazing game load times; you could just as easily opt for a high-end DRAMless like the Samsung 980 or class-leading Gen3 NVMe like the 970 EVO Plus, Plextor M9P+, or SK Hynix Gold P31.

Power draw during testing was another area of interest with this build. We opted for the 1000W PSU from our parts bin to be safe, and during testing, I noted a peak draw of 710 watts during the Far Cry Benchmark and 3DMark Timespy. Add another 20% to the 710 watts for overhead, and I'd say you could likely save money by going with an 850W PSU and still be on the safe side.

In the end, the build went together quite smoothly, we had no issues with the board, and that speaks to the several generations of "Gaming" motherboards now under the belt of Supermicro. We knew going into this guide they would produce a top-quality board as far as hardware was concerned as they cut their teeth in the enterprise and server markets where boards have to perform reliably 24/7. This background or history in the server market also crosses over to a consumer gaming board offering 10Gbe, Wi-Fi 6, and multiple ports of 20Gbps USB 3.2, a first on the Z590 platform.