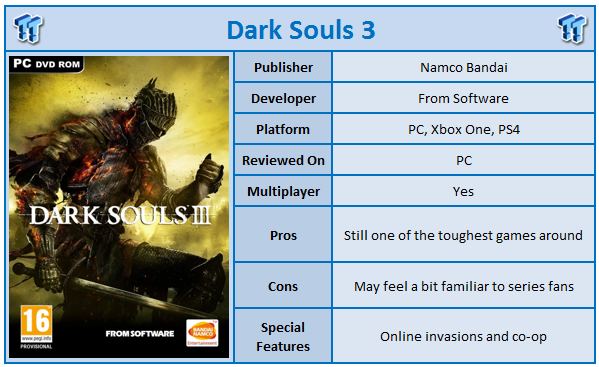 When Namco Bandai was originally pitched on this series by From Software, you have to wonder what that meeting was like. They wanted to build a game that was incredibly challenging, many players would get so frustrated they would not finish and at every turn, the player would seem like the game is completely screwing them over. Somehow Namco Bandai took this challenge on, and it paid off. Dark Souls became a series cherished by gamers who loved the fact that it treated you like an adult and was not afraid to punish you. It was also a significant achievement to finish. So now we have the third one in the series and usually, at this point, some games begin to feel franchise fatigue. Does Dark Souls III suffer this same fate?

Though most players do not come to this series for the story, Dark Souls III does have one and for those who do get into the lore, it goes quite deep. As a summary, you are tasked as the Ashen One and must defeat the forces of Cinder to stop the world the game is set in ending. At a base level that is it but those of you who take the time to talk to the non-player characters and explore paths off the beaten track will find a lot more lore information to take in. Ultimately, though, it comes down to beating a ton of bosses to save the world yet again. 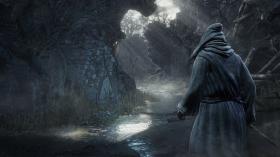 Just like the previous two games, as you would expect, Dark Souls III is an extremely challenging game. This is a game that is not afraid to frustrate you, but overcoming that challenge and frustration is what makes this game so rewarding. The highs when you take down a difficult boss completely erase the frustration you may have felt for numerous hours of play, and that is what makes the series so unique. You can go from complete utter disdain for Dark Souls III, and wanting to stop playing to elation all within a short period. It is a series where every little step needs to be considered to progress, and even if you do only beat a few rooms in an evening, reminding yourself that this is progress is key to enjoying the game.

For those who have not played the series before, the main core of the game revolves around you learning the patterns of enemies and boss characters, finding better gear as you progress, and building up a character. Over the course of the game, you go from a character which could struggle to hit a mouse, to a character that is a one person killing machine. Something we like about the game is that everyone's experience and character is unique. Checking out a few streams on Twitch while reviewing this game showed a huge diversity in the way people approached the challenge and the gear that they had. 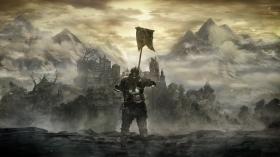 At its core, the gameplay remains very much the same of the previous two titles, but some significant changes do mix the gameplay up enough to consider it fresh. First of all, the developers have dumped the frustrating mechanic of the maximum life bar dropping every time you succumb to the enemies. The game does punish you in another way for dying (although the main way, the loss of souls for a second death without retrieval does remain), but it does not seem as brutal this time around. The key change is that there are now two Estus flasks, the new one being to restore magic points allowing you to cast spells. For some characters, this will be less important than others, but it does add another element you need to consider as you play. Perhaps the biggest change is that enemy characters (including bosses) can now change form during a fight, meaning you do have to think on your feet to take them down the first time around.

Another key component of the series returning is multiplayer where you can either choose to help out your fellow players or invade a player's game and attempt to kill them. This returns in Dark Souls III, however during times we were playing offline, we also noticed that the invasion element is a lot more prominent. No longer can you stay offline and expect to avoid invaders, and the AI characters that invade you are not a piece of cake to take down either, adding yet another random element to the game that increases the challenge. On the flip side, online, you can go and help other players out with boss fights, and this can be very rewarding to help someone beat a boss they have been stuck on for hours.

One thing that stands out in Dark Souls III is the variety of environments that the action takes place in. One moment you will be in a dark dungeon, the next looking at a stunning vista wondering what it is over there on the horizon (and you end up visiting that horizon and getting beat down over and over again). It is a game that manages to keep its fresh by utilizing different environments, and some of them offer challenges such as poison and other impediments to your character's progress. 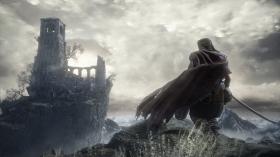 Visually, as expected, the game is the best looking in the series. The power of the PS4 and Xbox One has carried over to the PC version which is stunning, to say the least. Although the gameplay itself does not feel like it's a huge jump regarding progress from the previous titles, the visuals certainly do, no doubt making use of the extra power afforded to it by the consoles. That said, unless you have a top of the line PC, you are likely to encounter framerate issues (with some of the boss characters especially) and find yourself turning the visuals down. However, for those with the power, it's a stunning game. 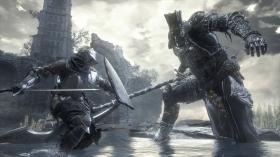 Dark Souls III was an interesting game to review. On the one hand, it is a very run of the mill sequel that takes many of the challenges from previous games and melds them together to come up with a third story. While on the other hand the improved technology and power have led to a visually stunning game that those with powerful PCs will take the most advantage of. Ultimately (and this probably is no surprise), it comes down to how you felt about the previous games. If you felt frustration and anger before putting the game down early last time around, this is still not for you. But those who put the effort and time in to learn the game's mechanics, you will find a game that surpasses the previous two and one that is very much worth the time and effort it takes to learn.