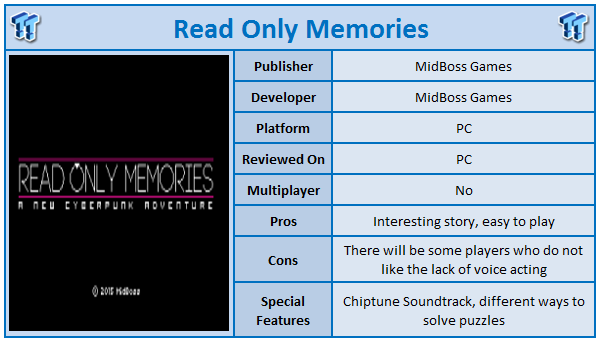 The adventure genre has had a renaissance in years past. Long thought of as a genre that had died due to its focus on single player gameplay, Telltale among others has managed to reinvigorate the genre to the point where they are now arriving on a fairly frequent basis. Indie developers never really gave up on the adventure genre, but many came and went without any fanfare much to the disappointment of the development teams. That brings us to Read Only Memories (ROM), a new adventure game that began its life as a Kickstarter. With some bad press in gaming around Kickstarter failures recently, it was refreshing to see one make it to the finish line. Not only that, it's a game that is impressive in its own right and one very much worth playing.

Read Only Memories takes some of its inspiration from classic titles such as Snatcher and other such titles. It is a love letter to the adventure genre of the 1990s not only in feel but also look. You play as a journalist in Neo-San Francisco, awoken one day by a companion ROM that has escaped during an attack on its owner's apartment. The ROM begs you to visit your friend's apartment and try to piece together what has happened and from there the story takes many twists and turns in typical adventure style until you find out what is going on.

What's interesting about Read Only Memories is that it very much features characters and themes that are not covered in games but is done in a fashion that is very respectful. As the developer behind the game runs the GaymerX convention, this should be of no surprise. There are LGBTI characters present throughout, and you will constantly come across game themes that explore some of the challenges the LGBTI community face in real life. It's what makes the game extremely interesting and different to play. Had this been a run of the mill adventure game with typecast typical characters, it would have likely been a fairly boring adventure title.

While the game is very much along the same lines as that of the adventure games of the 1990s, it does not have any brain-bending puzzles that will keep you up at night for weeks on end. Instead, it uses basic logic, and if you think about the issue at hand, it's very likely you will come to the right conclusion (that, or somehow we managed to breeze through every puzzle in the game by a fluke). Puzzles like this are infinitely more rewarding to complete because they are logical and do not stop your progression for long periods of time. There is also generally many ways to solve some of the puzzles with different options on offer depending on the dialog choices you pick.

In terms of gameplay, Read Only Memories is your typical point and click adventure, though it's not as linear as much as the games that inspired it. As you progress through the game, you will unlock new locations to explore and in most cases visit them many times over before the credits roll.

These locations are genuinely unique to each other, and it's quite obvious what can and cannot be interacted with. This is not a game where you will be on a pixel hunt.

There will be those who criticize the length of the game, but we found it just right. It is split up into chapters, and each of those concludes at a point where it's either easy to push on, but also easy to walk away and come back later. They are very much encapsulated into their own episodes. Those who are good at adventure games and have the time could probably finish Read Only Memories in one afternoon sitting, but we found it much better to play a chapter and have a break before continuing. It is the kind of game that could become monotonous with an extended session of play.

Although the game is not using cutting edge graphics technology, we found the style of the game to be charming and to suit the look and feel the developers were going for. It does play like a 1990s adventure game, and this also means you do not need a powerful PC to run it. Although there is no voice acting to speak of, the dialog and story line presented in the game is interesting and keeps the story ticking along. It's likely that voice acting may have been detrimental to the game as you as the player get to imagine how you individually would expect these characters to sound. As well as this the game contains an awesome chiptune soundtrack that is presented in a cinematic style.

While many Kickstarters have had a hard time of it recently and bad press, this one comes out trumps. Read Only Memories is a game that is likely not to race up the sales charts (which in many ways is a shame), but is a game that is sure to be adored and remembered by those who take a chance. If you are looking for a point and click adventure that has puzzle solving, but yet is a bit easier on the brain than those of the 1990s, this is it. The inclusion of some character backgrounds that you typically do not see in gaming (though that may change in the future) is refreshing. Recommended.