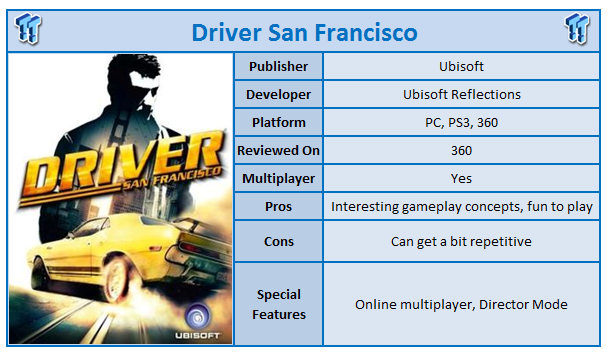 Before Stuntman, its poor load times and overall disappointing gameplay, Reflections was one of the premier racing developers around. Success with the original two Driver games on the PlayStation systems saw their games some of the most anticipated around, but a run of poor releases including Stuntman and Driver 3 (Driv3r) saw them drop down the food chain of hype.

Driver San Francisco picks up on the day Tanner is due to finally put Jericho away for life for his crimes. For those of you not up to speed, Jericho has been Tanners arch nemeses throughout the series and was the main protagonist in Driv3r. However, as expected, something goes wrong and Jericho escapes, but that's not the main problem. Tanner discovers that Jericho is up to something that puts the entire city of San Francisco at risk and needs to stop it, but in a very unique way. 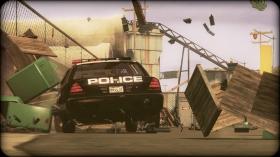 Whilst the main gameplay of Driver San Francisco is driving, there is a unique twist in the gameplay that gives it one of the most refreshing and unique ideas we have seen for a while. Tanner can 'shift' between cars. That is, at almost any point in the game you can move to an over world view, select a car and start driving it. This feature is not just for looks either and forms a key part of the gameplay. Often to catch up to a car you are chasing, you will find yourself shifting closer to the car to take it out, before switching back to Tanners car to end the pursuit.

What makes this feature so interesting to explore is the way that Reflections has incorporated it into the gameplay. Although there are only eight chapters (which consist of generally two missions each), there are many other missions that need to be completed before progressing. Before each Tanner mission you need to complete city missions which range from chasing down a car with the police through to protecting an armoured van from attack. When you jump into any car, you obviously interrupt a person taking control of the wheel, and the chat or job they may have been doing.

Falling into a car and picking up the chat is one of the games more interesting features. One minute you can be talking with a cop about the job ahead, switch to another car and you are arguing with a teenage daughter about why she can't go out. Reflections could have just let you take control and ignore all that detail, but it is this detail that makes Driver San Francisco such a polished experience to play.

Once you get away from the smarts of the shift mode, the driving itself is also impressive. The model is a mix of realism and arcade and whilst you do need to control your speed and steer properly, it's not a simulation by any stretch of the imagination. The individuality of the cars is also well represented. Large trucks handle poorly whilst sports cars with turbo engines handle much better as you would expect. That is an extreme example, but also more subtle differences can be felt between the different cars as well.

The game is set in the bay area of San Francisco and is gigantic. In many ways the shift mode makes it a lot easier to explore the city due to its size. Between missions you can jump into any car and just go for a spin which represents the 'free drive' mode of the game. Sometimes it's just fun to find a hot sports car and go for a spin in an area of San Francisco you might be familiar with.

Driver exploits this love of driving by including the film director mode again. You can take the last section of driving you have done, open it in the film director mode and use all different camera angles to come up with a good looking car chase video. Aside from this, to keep you going there are also challenges and when you complete those, you gain points to upgrade your car.

If the single player wasn't enough to convince you to try this game out, then the multiplayer definitely should be. Offering again some of the most unique gameplay we have seen, the multiplayer component of the game is expansive and has many options. One downside in a way is that the game does have an online pass, so buy this new if you want to get the most out of it. Multiplayer ranges from basic races such as trying to gain points by overtaking cars closely, through to crazy modes where you can shift into different cars in the city in a wide ranging game of tag.

As mentioned before, the game in terms of world is gigantic and even though this is the case, the graphics are still very impressive. The game does not miss a beat even at high speeds and with a lot of traffic on screen. This was obviously crucial to Driver San Francisco being a fun game to play. A game all about speed which runs like a slideshow at times is never going to be a good thing. The cars are all licensed and individually modelled for damage and also have unique sounds.

Speaking of which, the soundtrack is also incredibly impressive and the game always busts out a tune that you would expect to be driving with. The presentation of the story is also well done with an episodic TV style structure the order of the day. In between missions you get a recap of what has happened so far, just in case you forgot.

Driver San Francisco was a game that on paper looked a bit puzzling. The shift mode whilst shown and explained quite a bit before the release, was seen as a risk and hard to get your head around, but in practice it is brilliant. Reflections has put together an incredibly fun game to play, with some amazingly unique mechanics and gameplay that does not let up until the final credits roll.

Driver San Francisco takes us back a decade or so and reminds us why the original games were so good. Welcome back Driver, we missed you. 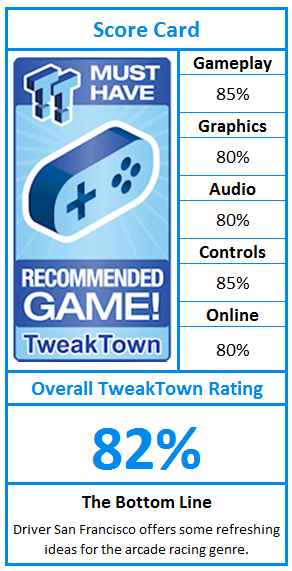