Today we spend several hours at the Universal ABIT Co. (Ltd) HQ here in Taipei, Taiwan. We spent time looking at some of their new products, which will be released later this year. We have some exclusive first looks at ABIT's new line of upcoming AMD AM2 processor based motherboards as well as their new Intel 975X motherboard, which will be released in the next week or two. What you will see here today will be a good indication of the types of products you will see being displayed at Computex Taipei next month, which we will also be covering from the show floor.

ABIT's upcoming AM2 motherboards are pretty much complete and ready to go. ABIT will release their "Fatal1ty" AN9 32X motherboard in June and boards should be shipping at the same time. On the other hand, ABIT are still working hard on Intel Conroe based motherboards. From what we have learned so far, Intel won't be releasing any new high-end chipsets till the end of the year and the Conroe processor will use the 975X and 965 chipset. Keep in mind Conroe processors will not work on your current 975X based motherboard due to the power requirement changes of the new CPU which claim to use 40% less power but provide 40% more performance clock for clock.

It would be a safe guess to say that ABIT is also looking at getting into the consumer market space with products such as notebooks and computer speakers - you may even have ABIT car electronics equipment in your vehicle in the near future. Big things are about to happen at ABIT with not just motherboards but many other product segments. While ABIT have no plans to get back into manufacturing graphics cards, there will be plenty of other types of products to keep the crew at ABIT busy.

As many of you will know, on March 21st of this year ABIT announced to the public that they were purchased by USI (Universal Scientific Industrial Co. Ltd.) who come to the companies rescue after some misfortunes and troubling times in the past. ABIT assures us things are better than ever and USI are able to provide them with the necessary financial backing to come back bigger and better than ever before, however time remains to see if this comes to fruition. The vibe of the employees inside the ABIT building seems very positive and the impression we got seems to be that everyone is very keen to make a come back and push out some special new product - or maybe they are trained well on how to act around media (just kidding!).

After a little twisting of the arm, we convinced ABIT to exclusively share their new brand logo with us. Here is a quick look at what you can expect.

ABIT is expected to make an official announcement of the new brand identity during Computex.

Let's start in the area which should be of most interest to our readers - new motherboards from ABIT supporting the upcoming AMD AM2 processor. As a quick re-cap, AMD's AM2 processor is actually almost identical to the current Socket 939 Athlon 64 X2 processors with one major exception. The current breed of Athlon processors only supports DDR-1 memory which is quickly becoming a dieing memory technology and the new range of AM2 processors will support DDR-2 memory operating at 667MHz DDR. You can expect to see performance increases of around 10 - 15% but initially performance between the K8 and K9 processors will most likely be almost the same, we think.

The first and most impressive new product we want to look at from ABIT is their "Fatal1ty" AN9 32X motherboard. This motherboard is targeted at the gamer (fast and stable not necessarily a great overclocker) and will fully support the AM2 processor and will use the nVidia C51XE Northbridge and MCP 55PXE Southbridge, which is likely to be called nForce 5. Being a gamer's motherboard SLI support is included with two full speed PCI Express 16x slots and dual Gigabit LAN and the whole works.

ABIT also have the regular AN9 32X motherboard which is very similar to the "Fatal1ty" with less flare (such as single Gigabit LAN) - and a lower price tag.

The "Fatal1ty" AN9 32X motherboard uses ABIT's new "Silent OTES GT" heat pipe cooling technology which looks quite impressive. An additional feature which deserves mention is the ABIT "AudioMAX 7.1HD" card which takes the onboard sound off the motherboard (so to speak) and uses a separate card - this is supposed to increase the quality of sound since there is less signal interference from the components on the motherboard itself.

We'll let the pictures do the talking, because as they say, "a picture can speak one thousand words..." 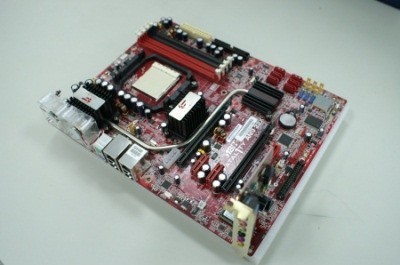 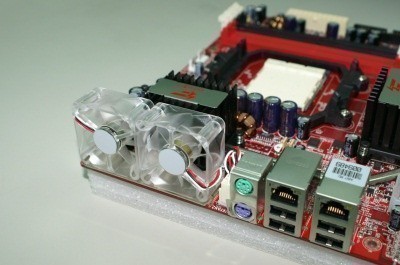 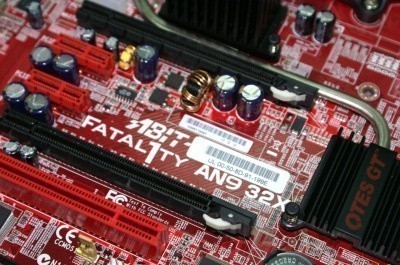 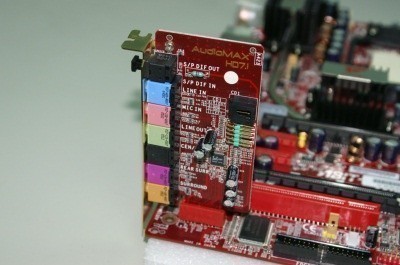 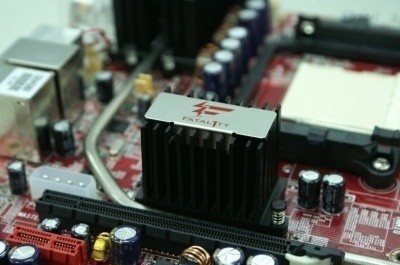 The "Fatal1ty" AN9 32X motherboard looks very promising and we are looking forward to putting it to the test in our labs sometime in June. Could it be the ultimate AM2 motherboard for gamers? We'll find out.

The next ABIT AM2 motherboard on the list is the KN9 SLI. This motherboard is quite different to the "Fatal1ty" AN9 32X in that it is focused more towards high-end users who want to overclock. If you look closely you will notice subtle differences such as onboard sound being placed in the usual location, silent OTES heat pipe cooling and a single chipset design - these changes indicate the differences between the product segments, that being the "Fatal1ty" AN9 32X for gamers and the KN9 SLI for overclockers.

Being a cheaper and cut-down version of the "Fatal1ty" AN9 32X, the KN9 SLI motherboard supports SLI but only regular SLI, meaning two PCI Express graphics slots operating at 8x each when using SLI - if not using SLI, the first slot will run at the regular 16x speed. ABIT has decided the KN9 SLI to be their best AM2 overclocking motherboard, so you should be able to expect some good results in this department.

ABIT will also release the cheaper "entry-level" KN9 Ultra motherboard which is just like the KN9 SLI but drops the SLI dual graphics supports and also loses a Gigabit network port. 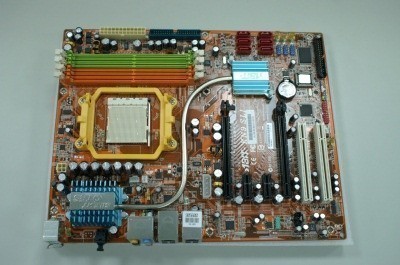 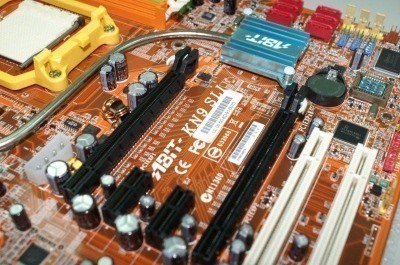 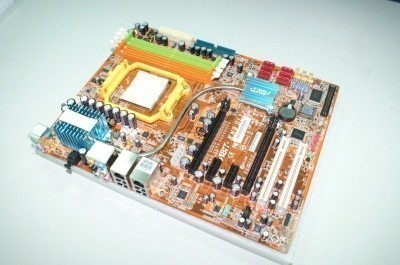 ABIT also let us know about their AT9 32X which is in a similar league to the "Fatal1ty" AN9 32X motherboard however is based on an ATI chipset solution. This motherboard will use the current RD580 Northbridge (which supports two full speed PCI Express 16x graphics slots for Crossfire) plus the upcoming SB600 Southbridge which we will see more of at Computex.

This new Southbridge from ATI promises to fix HDD performance and USB issues. Currently there is a shortage on Southbridges for ATI based motherboards and this motherboard will not be on the market till sometime in September, leaving the door open for nVidia to continue kicking ass in the AMD motherboard chipset market. Now that ULI has been sold to nVidia, ATI must work quickly to create a Southbridge solution equal to that of nVidia's solutions and also provide enough product quantity to motherboard manufacturers so they can continue selling ATI chipset based boards.

That concludes our look at ABIT's upcoming AM2 motherboards but now continue onto the next page to see the live demo which was setup for us.

ABIT kindly set up a live and very working demo of their AM2 motherboards for us to take some photos. We ran some benchmarks but unfortunately we are unable to share any of the results with you at this stage until AMD officially announce the CPU later this month, most likely May 23 but the date seems to keep changing.

Here are some shots of the live demo from the R&D department at ABIT HQ. 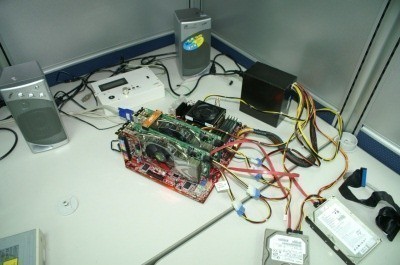 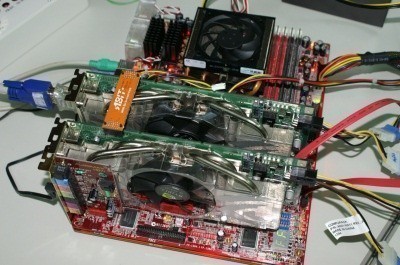 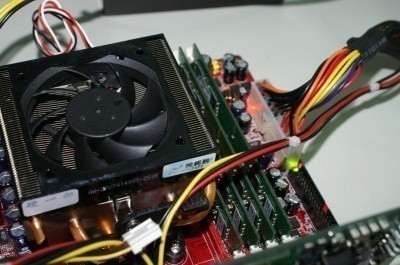 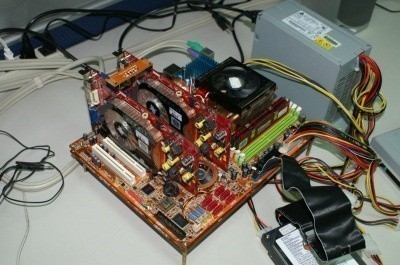 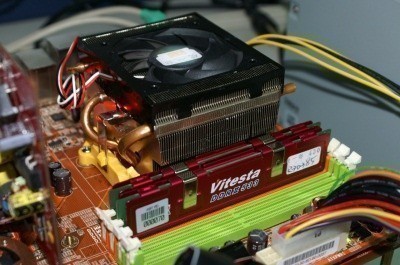 As you can see, ABIT's AM2 motherboards are very advanced and stability seemed perfect for the short time we tested them. Expect these motherboards to be ready and shipping as soon as AMD officially announce the AM2 CPU.

When it comes to the Intel 975X chipset, ABIT were a little late to the game. In the next week or so ABIT is due to start shipping their AWD8 motherboard based on the 975X and ICH7R chipset.

This motherboard also uses silent OTES heat pipe cooling technology however due to the thermal requirements of the ICH7R Southbridge, only the Northbridge is included in the pipe.

Here are some photos for your viewing pleasure. The pictures you are about to see are pretty much the final product however the silver heatsinks to the right of the CPU socket will be blue to match with the color scheme of the motherboard. 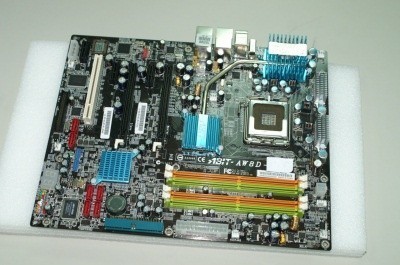 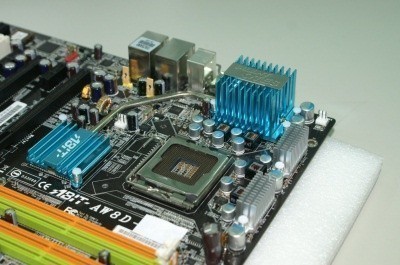 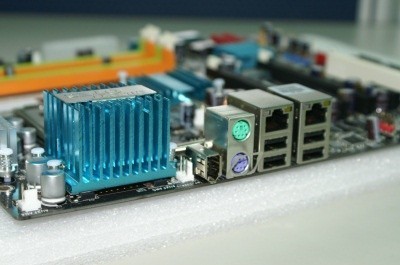 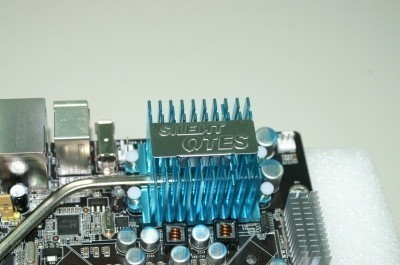 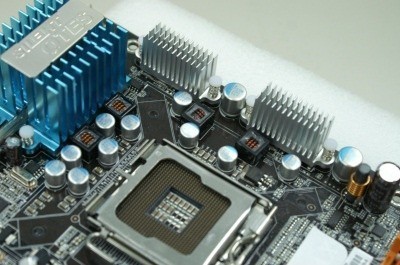 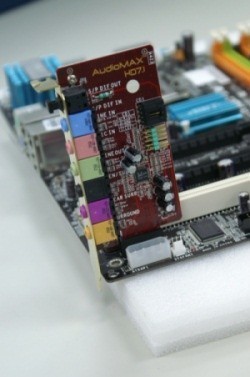 As mentioned the AWD8 motherboard will be shipping very soon and we'll be running it through our usual benchmark suite as soon as it hits our labs.

ABIT's newest line of products is their iDome digital computer speakers. When asked why ABIT decided to launch speakers, the answer was "Viiv" or in other words, the growing "digital home" market. Currently only 2.0 and 2.1 speaker sets are planned but depending on the success of these speakers, ABIT will create 2.1 and above.

ABIT's iDome speakers are digital in the sense that they use a true digital amplifier which is their own design. The audio signal stays in digital format from input right to the very last point. They integrate ABIT uGuru technology which allows the speakers to output 6 different DSP sound environments including "Flat Mode", "Game Mode", "Music Mode", "Movie Mode", "Rock Mode" and "Jazz Mode". These modes will be able changed from within Windows or from the speakers.

ABIT are claiming brilliant sound quality and reproduction from these speakers but unfortunately we didn't get a chance to hear the speakers in action. Here are some photos of ABIT's iDome speakers. 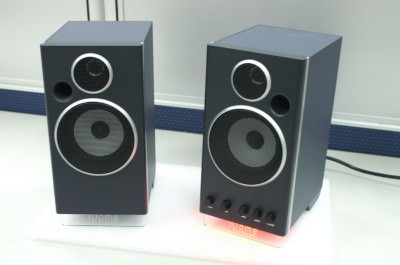 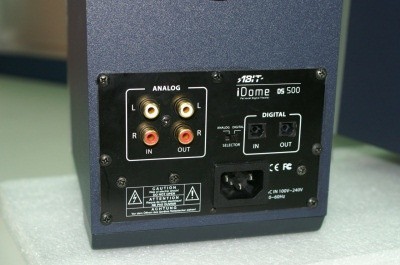 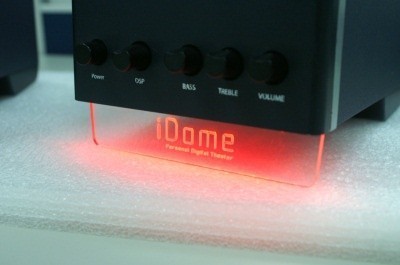 The build quality of these speakers is quite good and by the sounds of things (no pun intended), they should output a high level of sound quality - we are looking forward to trying them out. Note to ABIT: Please send me a set of these speakers for my notebook once they are ready to be shipped!

That wraps things up for now - ABIT well and truly look like they are back and they mean business. You can expect more coverage of these types of products early next month once Computex Taipei begins on June 6th.