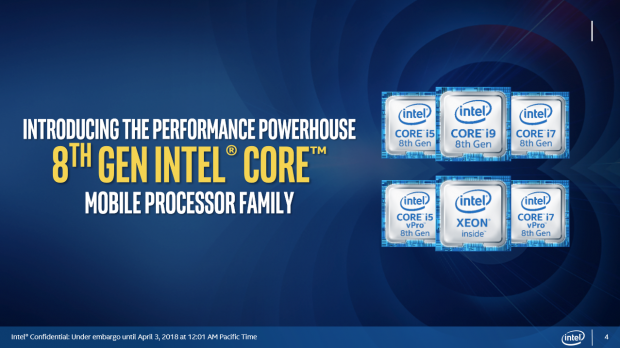 Intel has finally launched their highly anticipated H-series mobile processors. These processors are actually Coffee Lake CPUs instead of Kaby Lake-R CPUs, and they utilize a new 300 series chipset.

We just reviewed a notebook with an 8750H processor that offers 6 cores and 12 threads with a 45W TDP, so if you want to see how much more performance you get, head over and read that review. 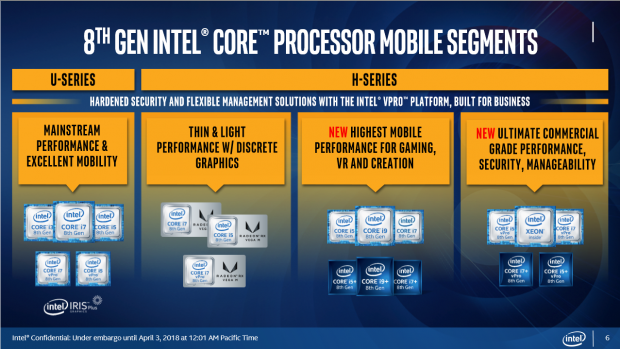 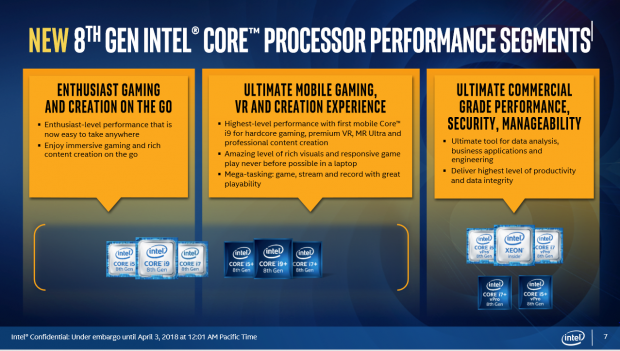 Now, Intel isn't just launching one type of H-series processor, but actually three. We get 8th-gen SKUs with Vega M graphics, similar to what we saw in Intel's latest Hades Canyon NUC.

Then we get the expected H-series replacements, they are at the same TDP as their predecessors, but they generally have 50% more cores. Intel is also launching new mobile Xeon and i5/i7 processors with vPro. For the latter two segments, we also get a new "+" SKU that refers to Optane storage included. 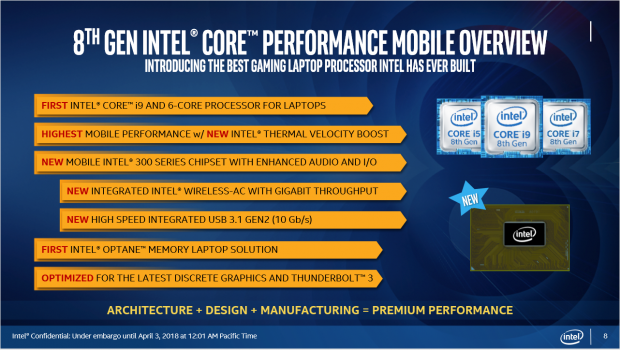 For the first time, Intel has produced an i9 mobile processor and has launched many 6-core processors. They have also added a new Thermal Velocity Boost and updated their chipset. For the first time, we see integrated Intel WIFI, USB 3.1, and Optane support in the mobile segment. 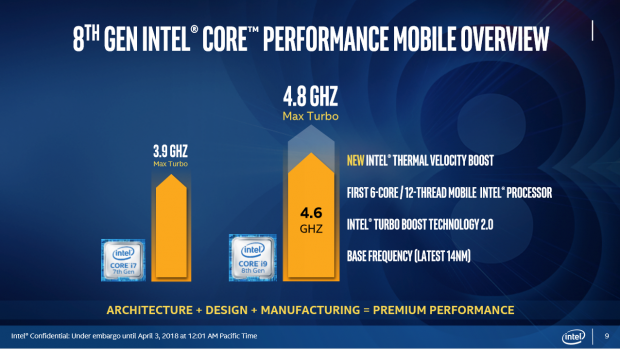 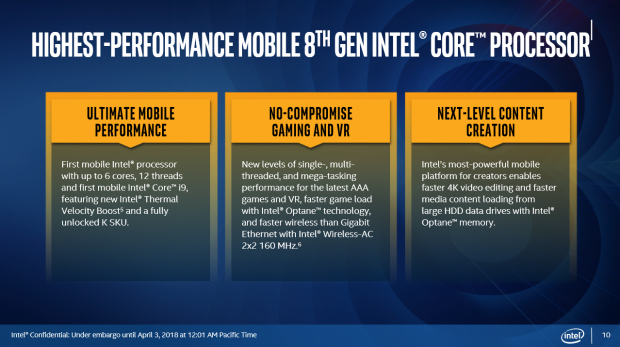 Now, the new Core i9 processor will Turbo up to 4.6GHz on a normal day, but with Intel's new Thermal Velocity Boost it can shoot up to 4.8Ghz single core if the system is cool enough. 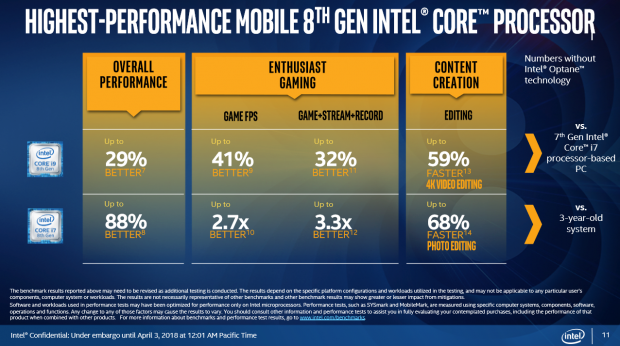 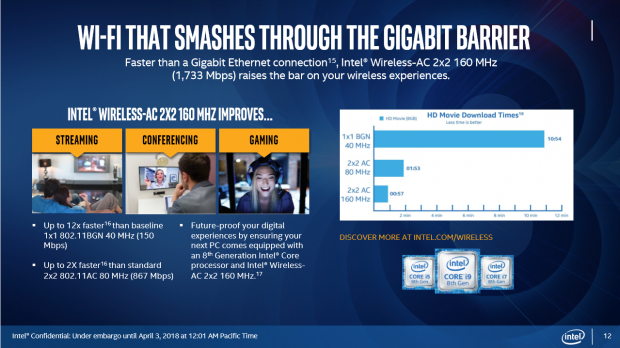 With two extra cores added to the i7 SKUs we find a lot better performance, and with added frequency boosts on the Core i9 mobile CPU we get even more performance. To facilitate faster processing speeds, Intel has looked to tackle the next bottleneck in the system; networking.

The new Wireless AC controllers from Intel offer 160MHz support, which can provide up to 1733Mbps of throughput, instead of the 867Mbps we find on current 80Mhz 2x2 controllers. Now, most of the NIC (like the MAC) is integrated into the new 300-series chipset, and a PHY is added that brings the physical layer support. 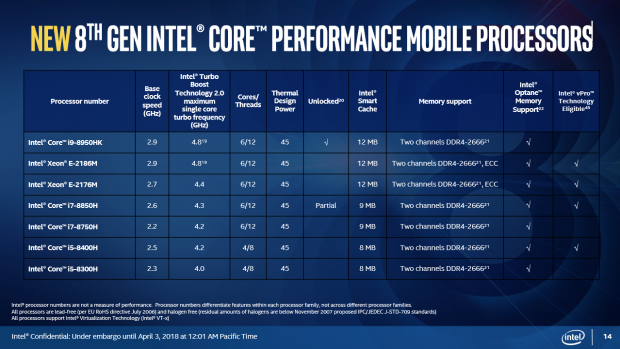 Here we can see all the new mobile H-series SKUs, with the i9-8950HK leading the pack. All these new processors support 2666MHz DDR4, and while they have low base clocks in the 2Ghz arena, they all seem to boot up between 4.0 and 4.8GHz depending on power and temperature limits. 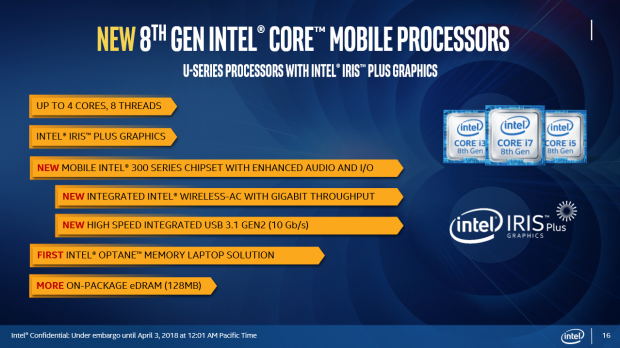 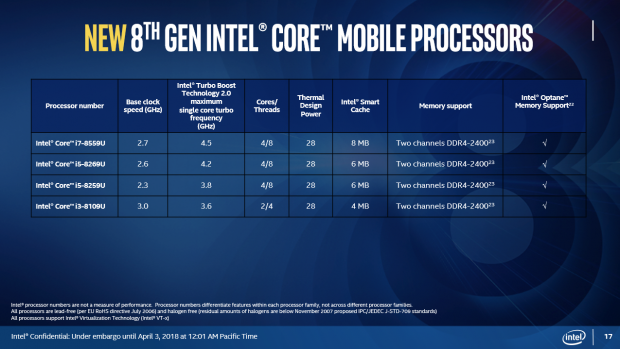 Now, we also get new U-series mobile processors with Iris Plus graphics. They will have 128MB on-package eDRAM and Optane memory support. They will use the new 300-series mobile chipset. There will be four SKUs launched with high Turbo speeds at 28W TDP. 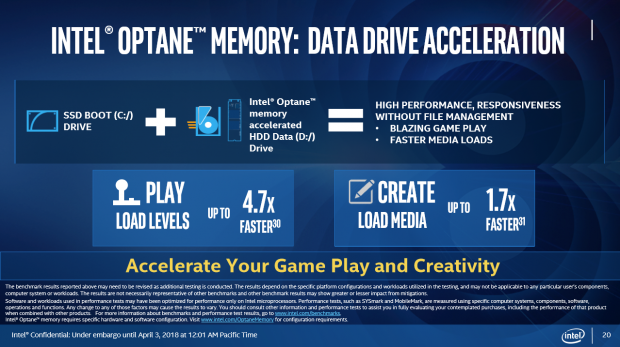 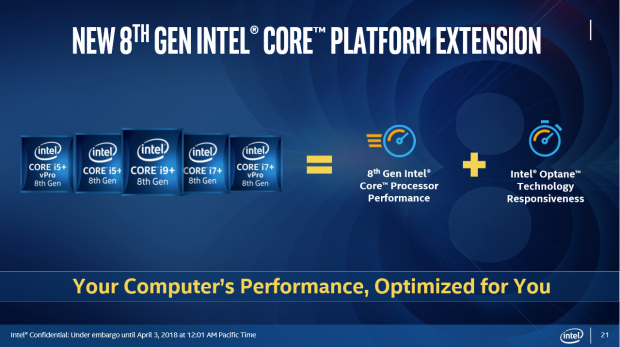 Many of us have heard of Optane memory by now; it's great at bridging the gap between NAND based SSDs and RAM. Its main use on the desktop is to accelerate a boot drive, but many people would rather just use a full-blown NVMe drive.

However, until now Intel has not allowed Optane to accelerate a secondary drive, like one used for game storage. Now that is possible. However, Intel also wants to accelerate laptops with Optane, and they have made it easy to see which notebooks have Optane. The badges with a "+" in them designate Optane memory included. 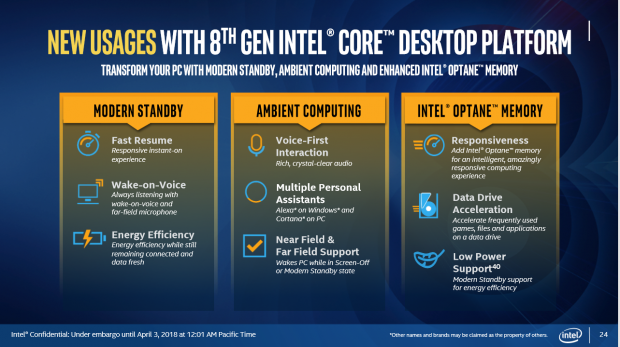 We also have new capabilities because of the recently launched 300-series chipsets. With improvements to the digital signal processor inside the chipset, audio has been improved on all motherboards.

Many people don't realize that the audio processor is built into the chipset and that the codec on the motherboard pretty much converts digital signals into analog ones. With these improvements, Intel has improved audio quality, and we also get wake-on-voice and instant-on capabilities. 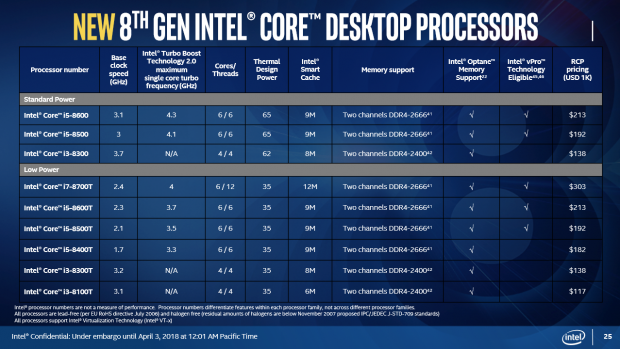 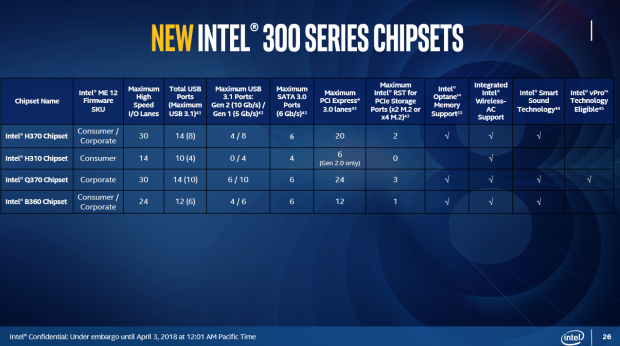 Many people have also been awaiting Intel's missing 8th Generation desktop SKUs such as the i5-8500. Those are now here, with the i5-8500 offering 6 cores and 6 threads under $200. Intel is also adding in their lower TDP "T" SKUs. With these new SKUs, we get a few new chipsets. Most notably the H370 and B360 chipsets. These new chipsets integrate USB 3.1 Gen 3 (USB 3.1 10Gbps), although I haven't seen a B360 or H370 motherboard with more than two of these ports implemented.

They also offer audio DSP improvements, just like the mobile SKUs. We also get an integrated MAC in the PCH that supports Intel's new 1.733Gbps PHY. Part of the Intel integrated WIFI solution is built into the chipset, and the rest will be offered in the form of an M.2 add-in card that you might or might not get depending on the motherboard. The new two-part system is similar to how Intel does their wired NICs on the desktop, but they are calling it CNVI. 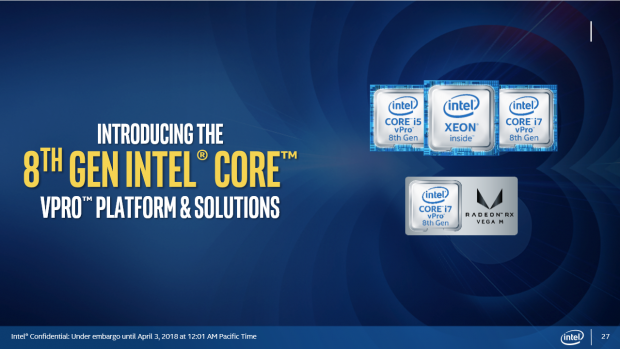 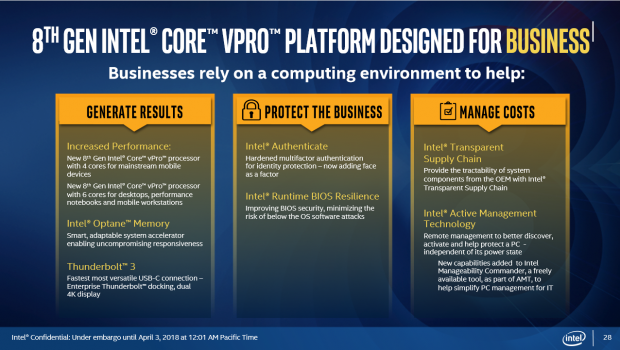 We also find enhancements to the vPRO lineup, and now you can get an i7 vPro CPU with Radeon RX Vega M graphics onboard. Intel is also trying to make it easier for Optane and ThunderBolt 3 to enter the business marketplace. Overall, today we have seen one of Intel's largest launches in regards to what is being disclosed. We got new mobile CPUs, new desktop CPUs, new chipsets, and new Optane technologies. Stay tuned for more as our reviews go live!