Well it was only a matter of time until AMD missed a month in their monthly driver and while the Catalyst 12.2 driver today is the "February" driver, the bottom line is that it didn't come out in February, instead it came out this month - March.

I hate to say it, but since Terry Makedon left the AMD driver team it just hasn't felt the same and if there was any situation that would cause AMD to miss a month it was going to be that and while it's been a while since he left, they work so far ahead that it was going to take time for the cracks to begin to show.

This February the company also had an extra day thanks to the leap year, and they still didn't hit it. While AMD released a "Pre-Certified" version of the driver earlier in the month, which they say is exactly the same; it just doesn't have the Windows logo. The bottom line is they've prided themselves that for some odd 7 years they've offered a WHQL driver every month.

Word is we'll see the 12.3 driver towards the end of March which will probably put them back on track with the monthly releases - but now that they've missed one, who knows if it will happen again. Anyway that's enough of that, let's quickly check out the release notes highlights from the latest driver to see what's going on and then get into the performance side of things.

- Applications must support in game Anti-Aliasing for the feature to work (Forced on Anti-Aliasing through the Catalyst Control Center is not supported for DirectX 10 and DirectX 11 applications).

- Custom resolutions - users can now choose from a much larger set of display resolutions for their AMD Eyefinity configurations.

- HydraVision enhancements: The Windows Task bar can now be moved and resized based on users preference. 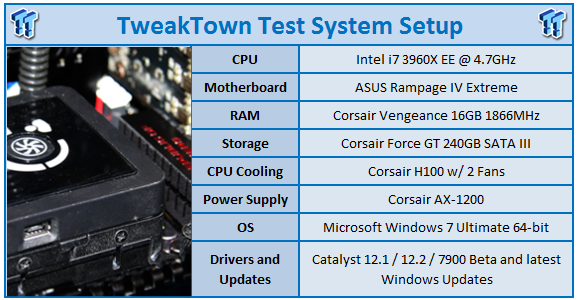 With probably one of the bigger highlights being that this is the first WHQL driver to bring support to the HD 7900 series and the HD 7700 series, we've added the HD 7970 into our testing mix today alongside the HD 6970 and HD 6870. 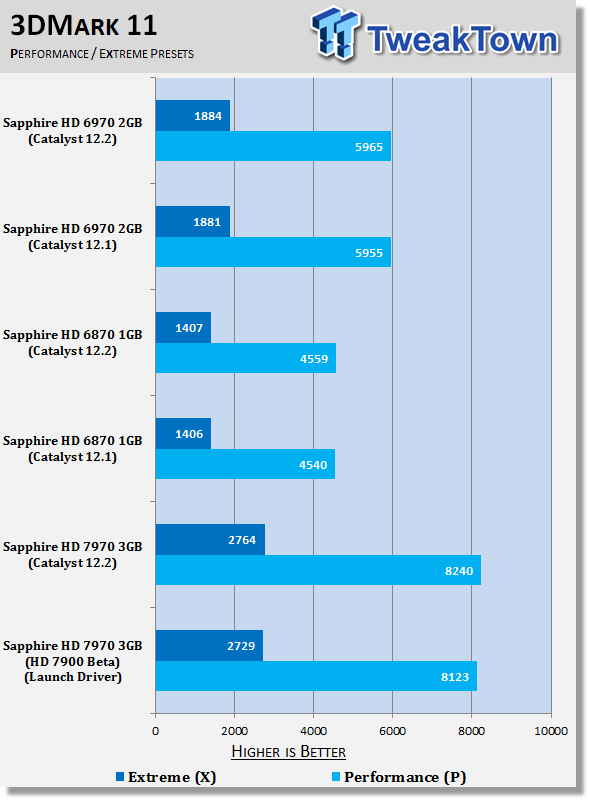 HD 7970 - In both presets we can see a slight bump in performance. Nothing too major, though. 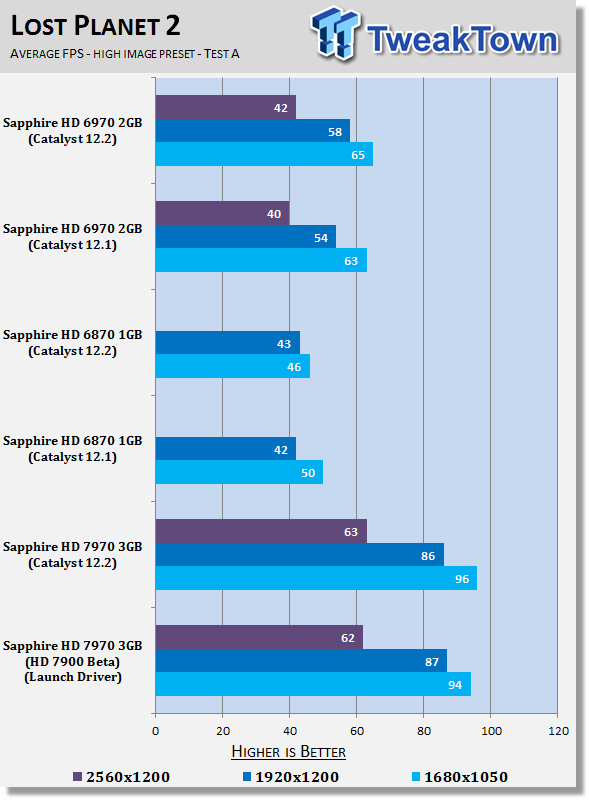 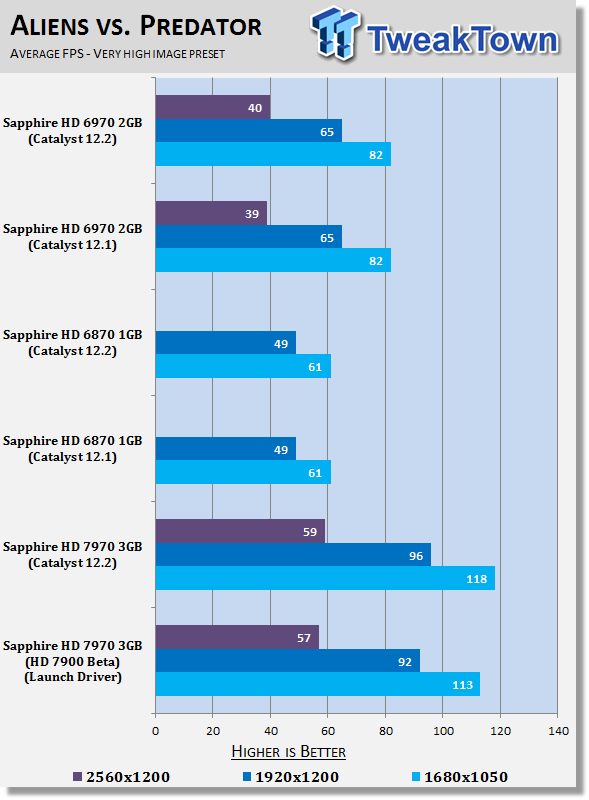 HD 7970 - Across the board we can see a nice little boost with the latest driver which helps put us a single FPS away from that 60 FPS average at the highest resolution. 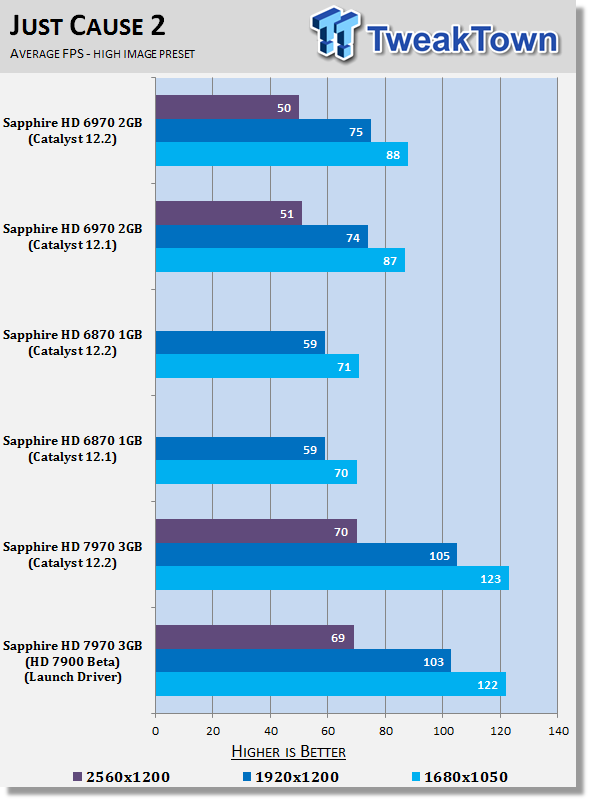 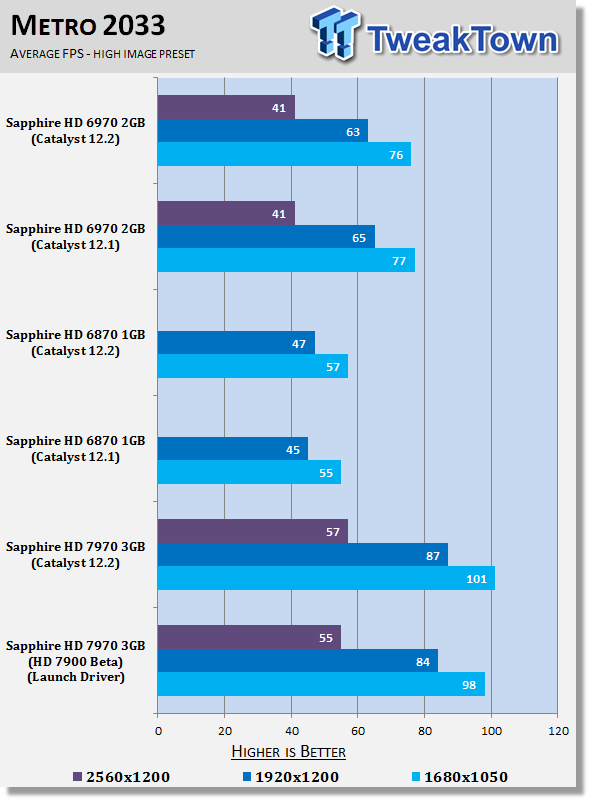 HD 7970 - Across the board we can see an extra couple of FPS which helps bring us ever closer to that 60 FPS average we want at the highest resolution. 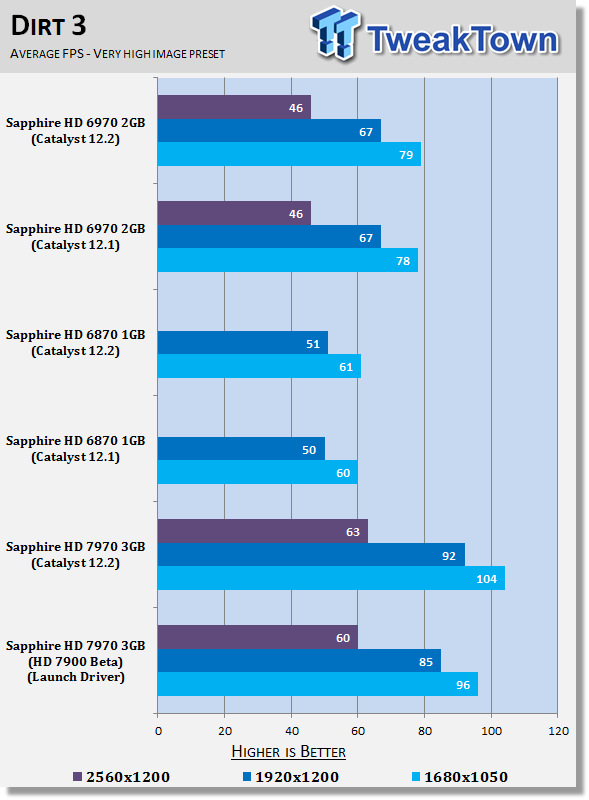 HD 7970 - Across the board we again see a nice little bump in performance and it helps give us a bit more breathing room at the highest resolution. 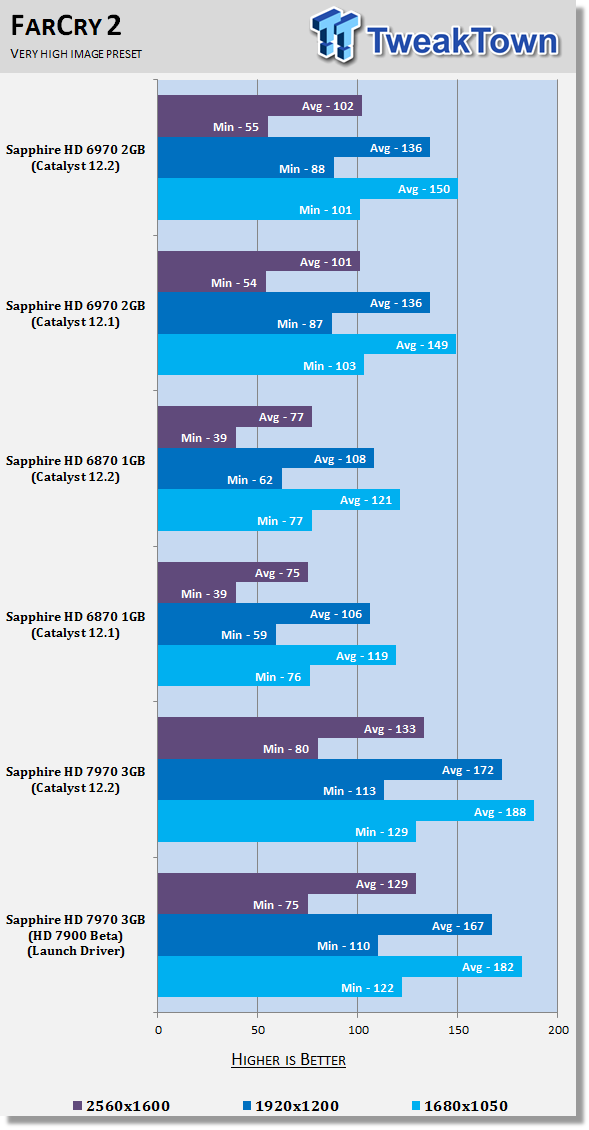 HD 7970 - Across the board we can see a bit of positive movements in all our numbers. We don't really need it under FarCry 2, but we're not going to complain. 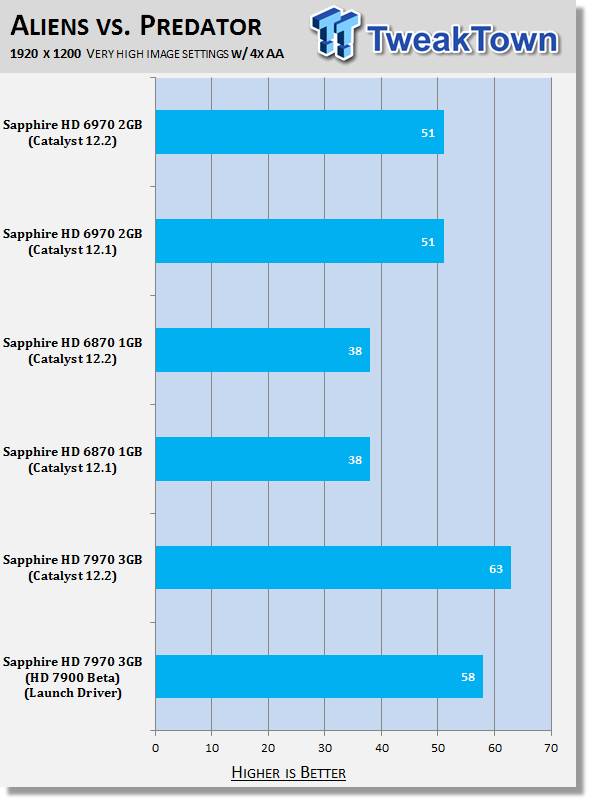 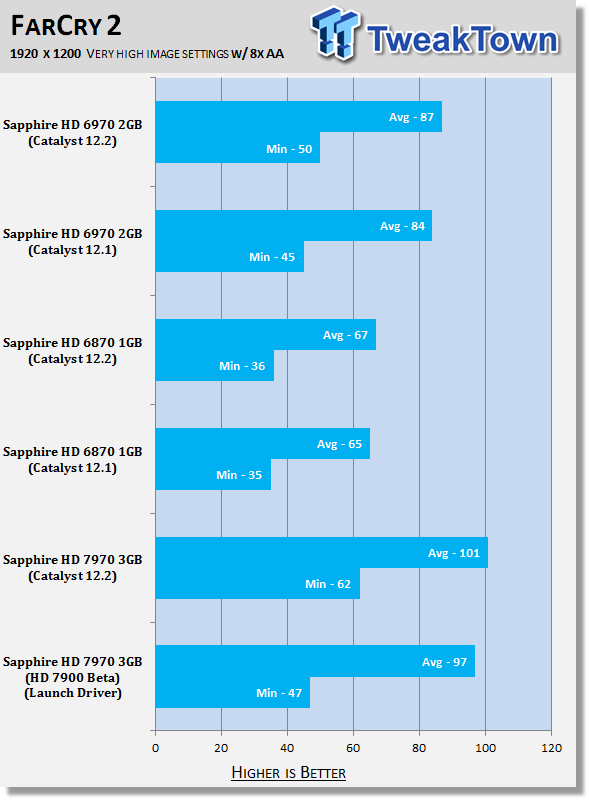 HD 6970 - We can see a little bit of a boost under FarCry 2, but nothing under Aliens vs. Predator.

HD 7970 - Nice boost in both our games here, but more importantly a boost that helps push our Alien vs. Predator AA / AF numbers over the 60 FPS mark. Something the launch driver didn't do.

The first thing I want to say is that this is a good driver and you should run out and install it as soon as possible. It doesn't even matter if you're on a HD 7000 series card or older HD 6000 series one, you can see performance improvements under both scenarios.

With that out the way, though, I still find myself so disappointed with AMD. Not only is the 12.2 driver over a week late, it's ruined the awesome driver hot streak that AMD was on and it gets detected as the 12.3 driver under GPUz. We're not sure if that's a GPUz issue or this is literally the 12.3 driver that is going to come out later this month.

Either way it's really disappointing and it feels like there's some cracks beginning to appear in the AMD driver team - a team that has been strong for years and such an important one for AMD. No matter what you said, you could always say that like clockwork AMD will release a WHQL driver that will fix current issues every month.

Well finally it's no longer like clockwork. Maybe AMD will hit every other driver release this month in that month, but at the end of the year, instead of doing it for eight years it would be for 10 months.

I know that AMD would also say that the pre-certified driver is exactly the same as what we're seeing today except the fact that it doesn't have the Windows logo. Well, that's not really the point, is it? This is a great driver none the less and again you should be installing it no matter what AMD Radeon video card you're on. For me, though, it's the February 2012 driver that didn't come out till March.