At launch it looks like ASUS is going to be covering a wide range of price points and user needs. The other week we managed to take a close look at the ASUS P9X79 Pro and Deluxe. If you're interested in living a bit more on the extreme side of things, then no doubt the ASUS Rampage IV Extreme is going to be the board that will grab your attention.

Just like our other X79 previews, we're of course under NDA on a number of areas so there continues to be things we can't tell you. Of course, there are also things we can tell you about, so we'll be following the same preview layout we used in those with a look at the box before we move onto the board itself. Once that's done we'll quickly wrap everything up and continue to get all wiggly about the imminent release of the new Intel platform. 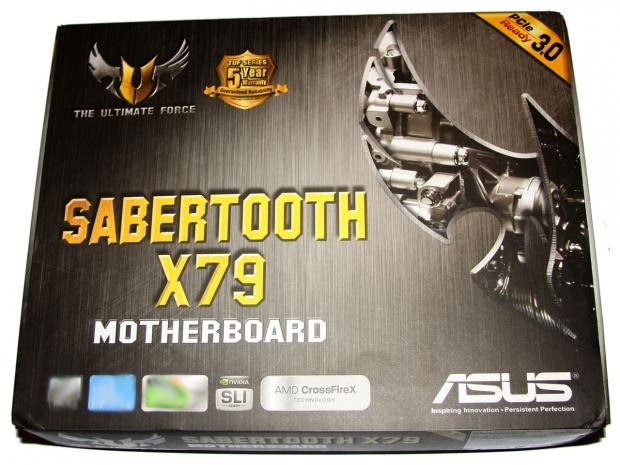 Checking out the front of the box, we can see we've got the model number, mention of the massive 5 Year Warranty that's on offer along with the other bits and pieces you'd normally expect to see out of an ASUS motherboard box. 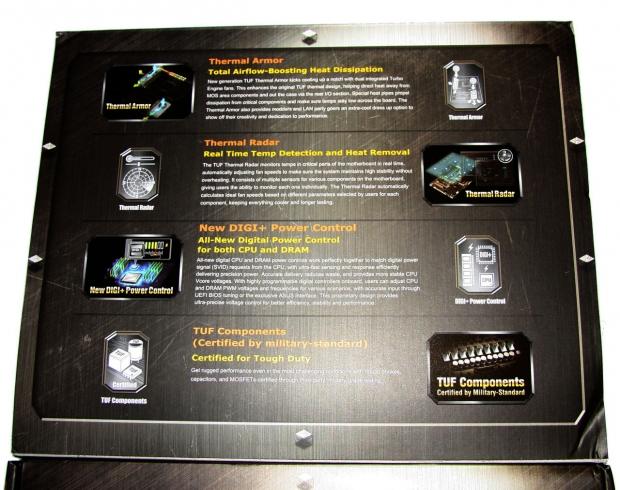 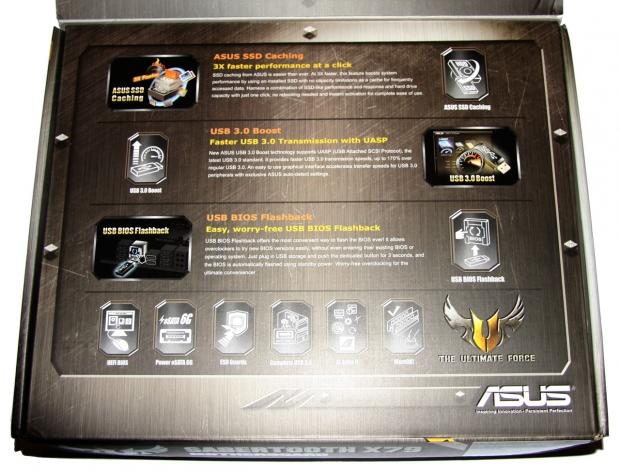 Like the other X79 boards we've looked at from ASUS, this one opens up and gives us a run down on some of the features that are on offer from the Sabertooth X79. A large focus on the series is of course the "TUF Components" side of things and there's a heavy focus on that here. Along with that, we also see some of the new ASUS features that are on offer including SSD Caching, USB 3.0 Boost and USB BIOS Flashback. 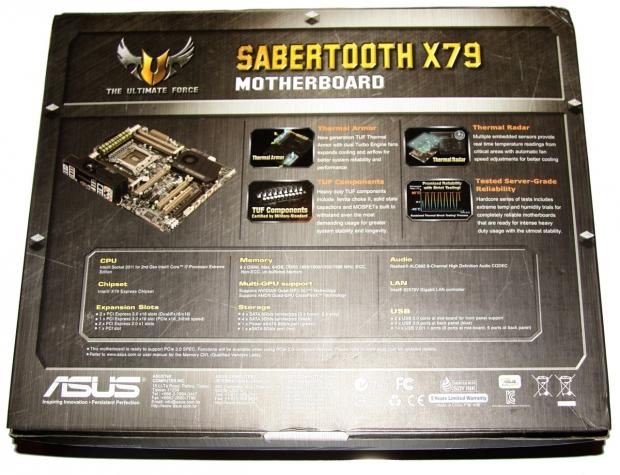 Turning the box over, we again see some more detail on the features along with a picture of the board and a list of the main specifications on offer. Of course, we'll look at everything a bit closer in just a second as we move onto the board.

Normally at this point we'd show you what's going on in the bundle, but unfortunately we're unable to do that at the moment. Instead you'll have to wait for the full review to come out. Of course, that means we'll move on to the board now, so with haste, let's check it out!

ASUS Sabertooth X79 - The Board

ASUS Sabertooth - The Board

With the box out of the way, it's time to get into the board and you can see we've got that Army Green color going on alongside the black which makes for a pretty good looking board. To be completely honest, the Sabertooth series of boards for me falls in with the G1 series from GIGABYTE. I wasn't a fan of the color scheme at all, especially since I'm just personally not a fan of the color green. The pictures just don't do the board justice, though. Once in hand, the Sabertooth color scheme looks really nice and unique that helps it stand out. 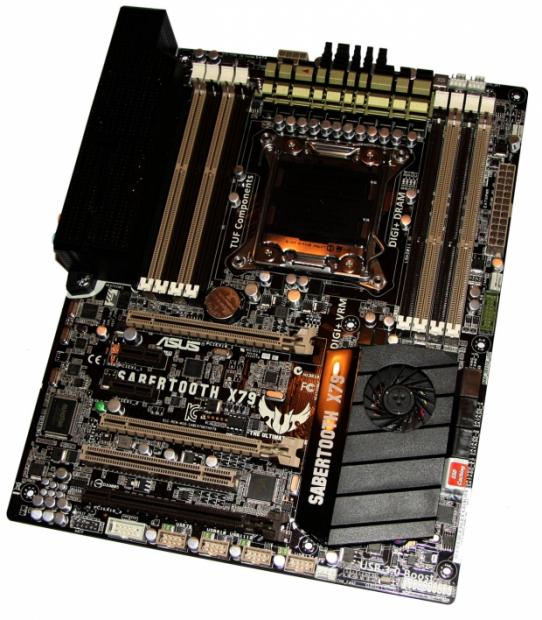 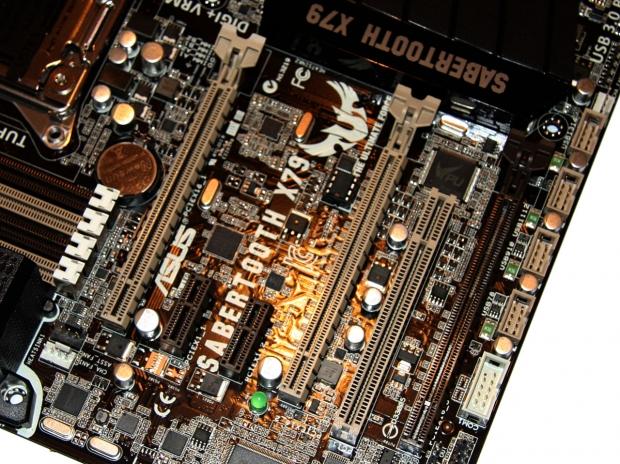 Moving in closer to the board, we can see the expansion slot setup with a single legacy PCI slot present, two PCIe 1x and three PCI x16 slots. We can't go into detail on the speed of the slots, but it's not too hard to figure out the speeds and which ones are going to be your main PCIe x16 slots.

ASUS Sabertooth - The Board Continued

Moving up north, we can see a bunch of fan headers here with three on the right hand side and one sitting next to our main 24-Pin ATX power connector which also sees our "MemOK" button next to it. 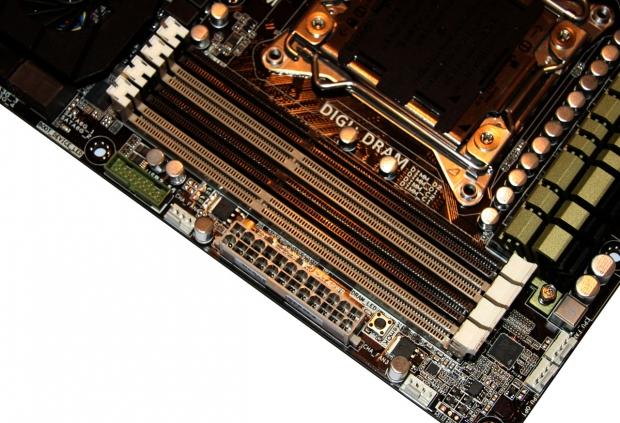 Also around here we can see a USB 3.0 header on the far left and a look at four of the eight DDR3 DIMM slots that are present on the board.

Moving around to the top half of the board, we can see a single 8-Pin CPU connector up towards the back of the board. We've seen on the X79 series of boards the 8-Pin connectors have been moved more to the middle of the board since the CPU socket has actually shifted due to the way the RAM layout is now. 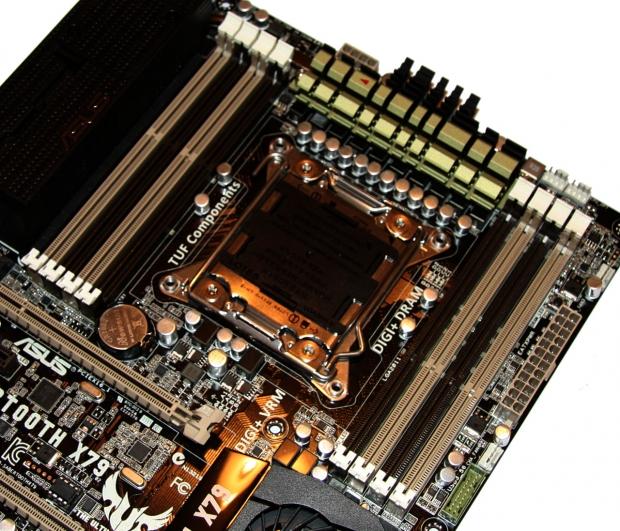 Finally, we finish up with the I/O side of things and we've got this massive shroud that surrounds all our ports along with a peek at another part of the heatsink that helps keep the board nice and cool.

You've then got the P9X79 Pro and Deluxe boards, both good looking boards, but you know to some of us we'd consider that look a little boring. Especially if you find yourself lusting over the color scheme offered by the ROG line - to move back to the blue scheme might not push all your buttons.

This is where the Sabertooth X79 steps in. You've got something different to that blue color scheme we've seen from ASUS for a long time and while we don't have the Black / Red one that's seen on the ROG boards, we do have something outside the norm from a series that isn't going to bust your bank account wide open.

Outside of this, though, something that makes the board and series stand out so much is the "TUF Components" and because of that, ASUS are confident enough to give you a massive 5 year warranty on the board. If you're someone who tends to do a PC cycle in that 3+ year mark, this becomes such a stand out feature.

Really, the only thing we need to know now is the performance of the board. Unfortunately we're not able to cover that today, but know that we're not too far away. Keep an eye out later in the month for a full review on the Sabertooth X79 from ASUS.