I'm going to be really honest right now - I'd rather not be doing these previews. The process to get them online at the moment is such a pain as we have to follow stringent rules, get our words approved by certain people and then finally when it goes live, someone still tells us that there's something wrong, and that's a real pain in the butt!

But today it's all about ASUS. The NDA on certain areas has just lifted and we're going to show you what we've been told we can show you. That's essentially everything that we could show in our MSI X79A-GD65 (Intel X79) Motherboard Preview except the bundle inside the main package.

We've got two boards on hand here - the ASUS P9X79 Pro and ASUS P9X79 Deluxe and we'll be following our normal preview structure, which means we'll start with the package before we take a closer look at the boards. Once we've done that we'll move onto our next board and do the exact same thing before we finally wrap everything up. So with haste, let's check out the box of the ASUS P9X79 Pro. 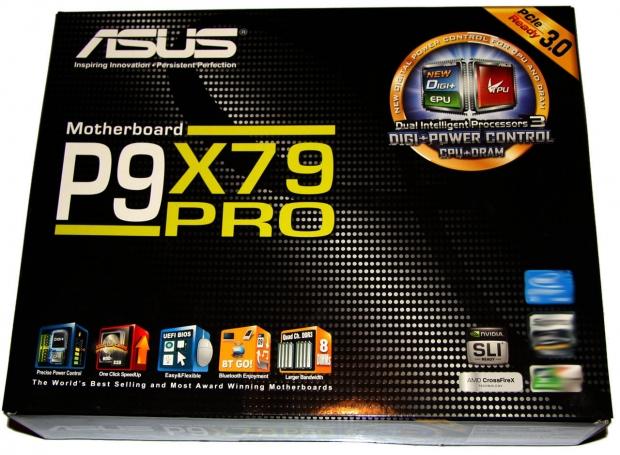 As we look head on, the overall design of the box doesn't show us anything we haven't really seen before. We've got the model taking up a big portion of the box along with some of the main benefits available on the board. 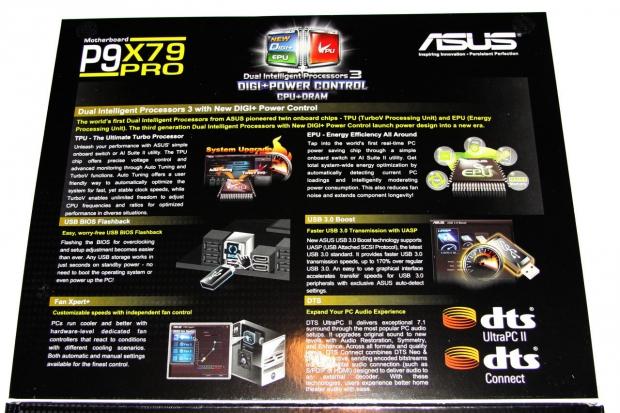 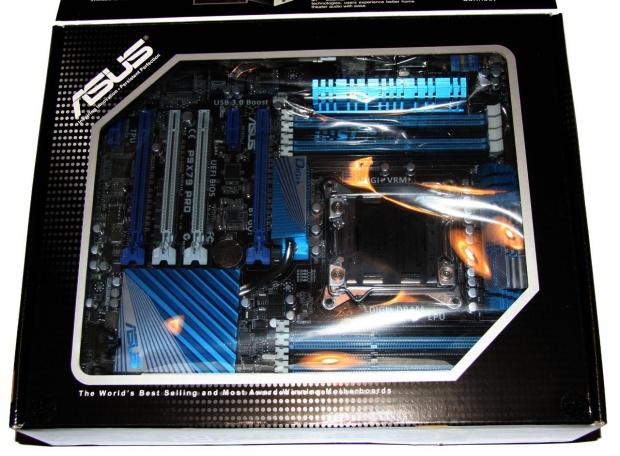 Something a little different to what we normally see is the fact that the box opens up and gives us even more information on some of the features that are on offer, while across the bottom we can see our first look at the board. Normally we see the box open up on the more expensive ROG boards.

Turning the box over, we can see even more details about the board while we've also got a run down on the main specifications - nothing too out of the ordinary at all when it comes to the box.

Moving away from the box and onto the board, we get our first proper look at the P9X79 Pro and you can see we've got that darker black PCB on offer with the typical blue color scheme that's present with other Pro / Deluxe motherboards. 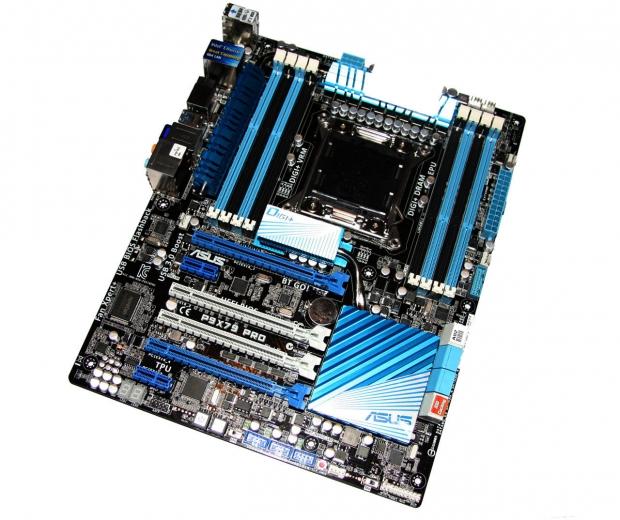 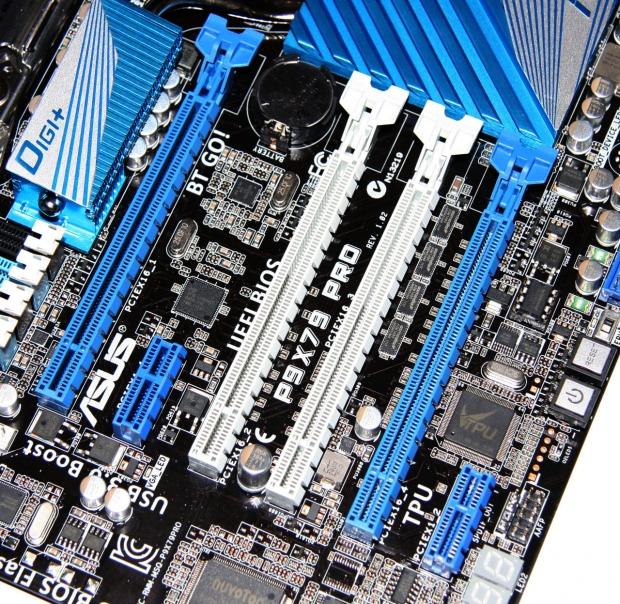 Moving in closer, we start to get an idea of what's going on in the expansion slot department. The first thing is, it's nice to see that legacy PCI is dropped. As for the expansion slots themselves, we've got two PCIe x1 and four PCIe x16. We can't go into detail on the speeds the slots are running at, but if you look closely you can see the wiring setup on offer which will give you a good idea.

Moving to the bottom of the board, we can see all the usual culprits present. Starting from the left, we've got our LED Debug meter, power and reset button, EPU switch, three USB 2.0 connectors, Clear CMOS button, fan header, TPU switch and our front panel connectors. 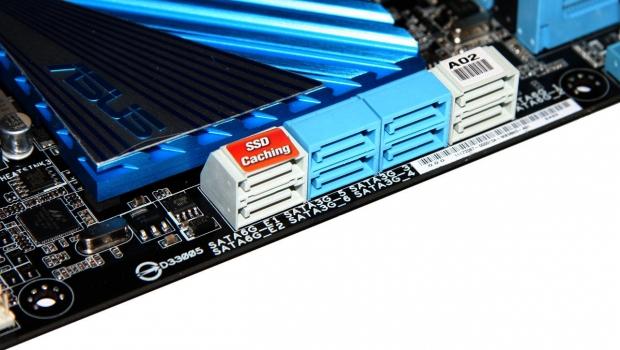 ASUS P9X79 Pro - The Board Continued

Moving to the top of the board, we can see we've got a USB 3.0 header on the left followed by a fan header, 24-Pin ATX power connector and another fan header. Above this we've got four DIMM slots which we'll look at closer in just a moment. 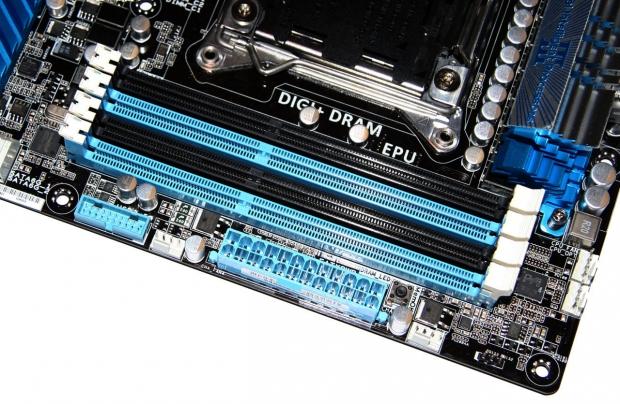 Moving in a bit more, we get a better look at what's going on with the RAM slots here. We've got a total of eight slots supporting DDR3 memory. As for the amount and speed, we unfortunately can't go into that at the moment; more will become clear soon enough, though. 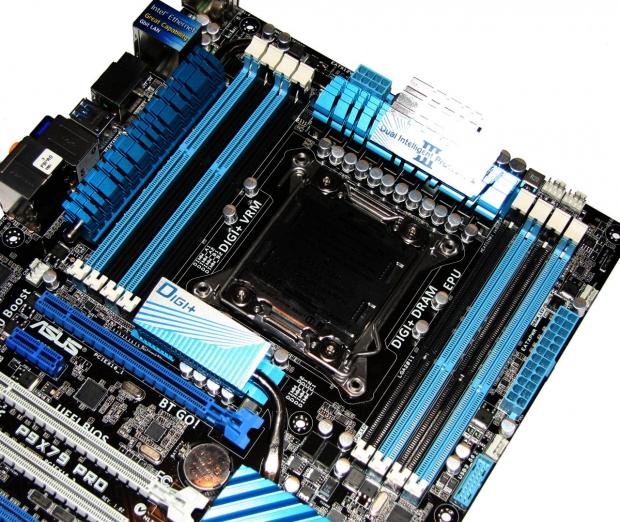 Also around this area, you can see we've got our 8-Pin CPU power connector at the top of the board and the CPU area itself which looks pretty clean. We can also see a couple of ASUS heatsinks with the "Digital" power aspect being promoted on them.

Finally moving to the I/O side of things, we've got four USB 2.0 ports on the left and a clear CMOS button. Next to that we've got two USB 3.0 ports running off the ASMedia controller and above that a Gigabit networking port that runs off the Intel 82579V controller.

Continuing to move over, we've got an optical out, two SATA 6G eSATA ports running off the ASMedia 1061 controller, two more USB 3.0 ports, two more USB 2.0 ports along with a Bluetooth module and six auxiliary ports which run off the Realtek ALC-892 controller that also takes care of the optical port.

Moving away from the Pro and onto the ASUS P9X79 Deluxe, you can see the overall package is near identical with the main difference only being that the Deluxe naming is present here. 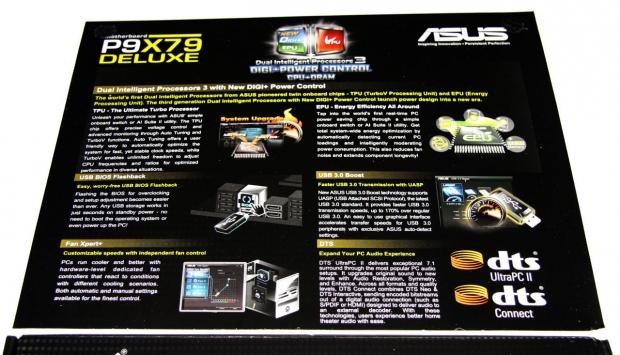 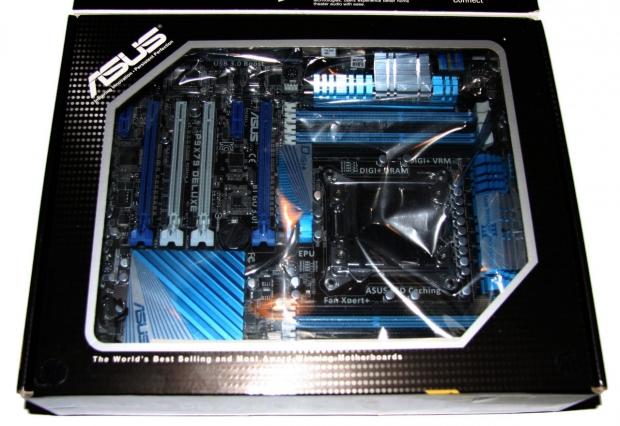 Exactly like the Pro version, we can see the box opens up. We've got a lot of the main features across the top while at the bottom we can again get a look at the motherboard itself.

Flipping over the box, we can again see the box and we've got even more details on the features that are available along with another look of the board and the specifications that are on offer.

Getting onto the board, we can see that like the Pro it's very similar with little difference being seen between them. Let's move in a bit closer, though, and see exactly what's going on. 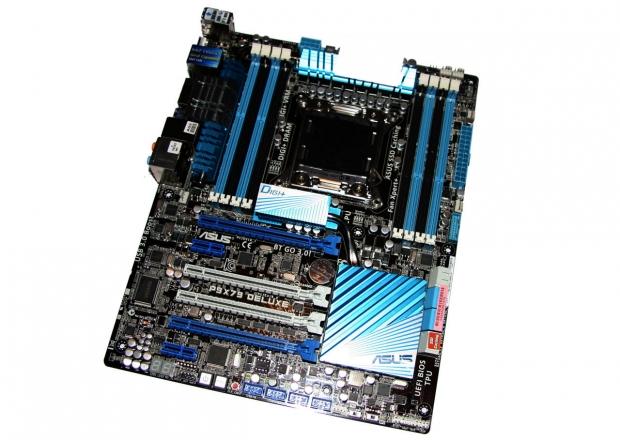 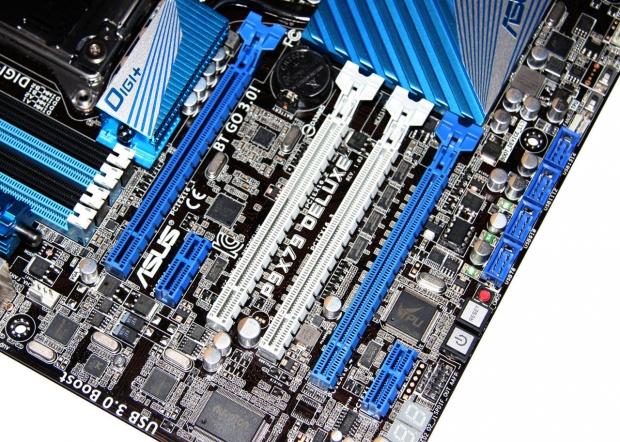 As we move through the board, you can see we've got the exact same setup that's present on the Pro version with just a little bit of change being seen at the bottom of the board. As for the SATA ports and the controllers running them, we don't see a difference.

ASUS P9X79 Deluxe - The Board Continued

As we move to the top of the board, we again see that same design setup with our USB 3.0 header, 24-Pin power connector and a couple of other fan headers. 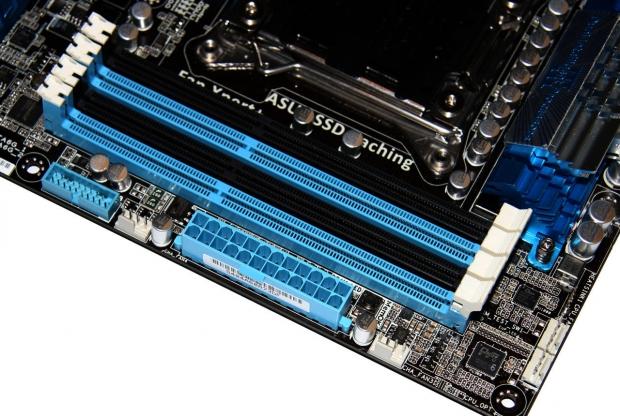 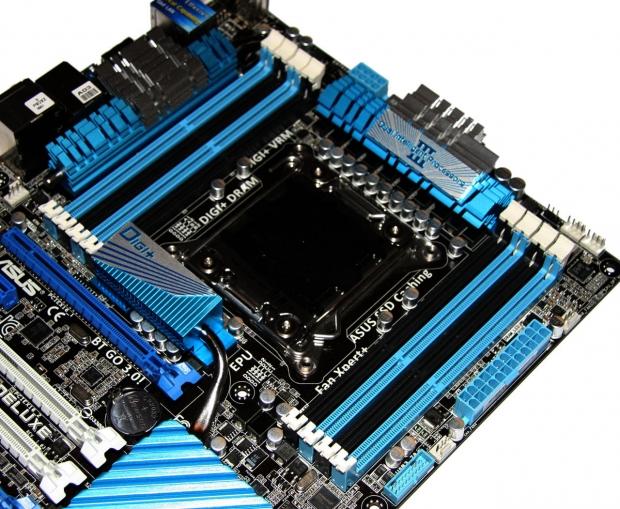 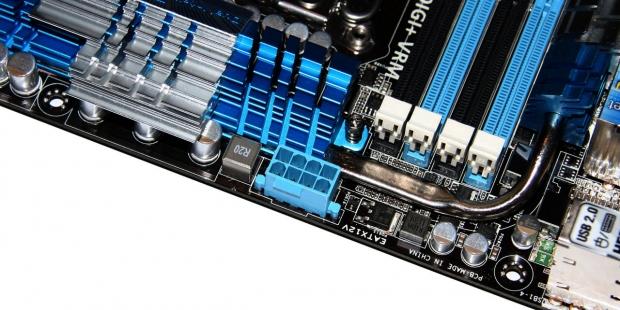 As we move around the rest of the motherboard, we can see the layout again remains the same with our eight DDR3 slots, single 8-Pin CPU power connector and a fairly clean looking CPU socket again.

The I/O side of things shows us some changes. We've now got six USB 3.0 connectors running off the same ASMedia controller and instead of the Bluetooth header we've got a second Gigabit networking port. One runs off the same controller as the Pro while the second comes off the Realtek 8111E controller. Of course, the chances are you're going to opt for the Intel one over the Realtek one.

Looking at the P9X79 Pro and Deluxe, one could argue that there's no real difference between the two boards. The biggest change is the 16+2+2+2 VRM setup on the Deluxe over the 8+2+2+2 setup on the Pro. The higher amount of power phases means that overclocking ability should be a little better on the Deluxe version.

The other big difference is the fact that Triple card SLI / CrossFireX is an option on the Deluxe board, making it that little bit more enthusiast orientated. It's really that option before you step into the Sabertooth / ROG line from ASUS.

As for the other differences, well, they could be seen. The Deluxe carried with it another Gigabit networking port along with two extra USB 3.0 ports. Along with that, the new BT 3.0 GO is on offer; we can't show that today, but if you thought the Deluxe missed out on Bluetooth as it had no header, we do have one!

Two other big features that bring themselves to the X79 line-up as well is the USB BIOS Flashback feature. This is an awesome little feature that allows you to flash the BIOS of a motherboard with literally nothing in the system. While you might wonder what's so good about that, It's particularly handy if you get a motherboard and a brand new CPU that wasn't supported on the shipping BIOS. With the aid of a USB drive you can get to the latest BIOS without the need of getting an older compatible CPU.

The other big feature is USB 3.0 Boost. We don't know a lot about this, but the box shows a performance increase of up to "170%". Since USB 3.0 is something we test, we're really interested in seeing the kind of performance that comes out of this setup.

For now, we can't say much more. Instead we have to wait a little longer before we can check out the real fun stuff; performance. So let's leave it at that and if you haven't checked it out, make sure you have a peek at the brand new Rampage IV Extreme that we've been able to sneak a look at as well.