All NewsBusiness, Financial & LegalCases, Cooling & PSUContests & GiveawaysCPU, APU & ChipsetsDealsDisplays & ProjectorsGamingMotherboardsScience, Space & RoboticsStorageVideo CardsVirtual & Augmented Reality
All ReviewsAll ArticlesAudio, Sound & SpeakersCases, Cooling & PSUCPUs, Chipsets & SoCsComputer SystemsDisplays & ProjectorsGamingMotherboardsNetworkingPeripheralsStorageVideo Cards
GuidesGamingAsk the ExpertsNewsletterAboutForums
Windows 11Halo InfiniteBattlefield 2042Elon MuskGTA 6RTX 3080HDMI 2.1Bitcoin Mining
TRENDING NOW: 'Time traveler' claims his year 2027 is connected to 2021
TV, Movies & Home Theatre
Editorials
If you have been following trends in the HTPC movement, you will know that over the last year or two this market segment has simply exploded. We recently took a look at some data that shows it is estimated that every month over 400,000 search queries are made for the key words "PC to TV". What has led to this increase in interest? Well, it is a combination of factors. 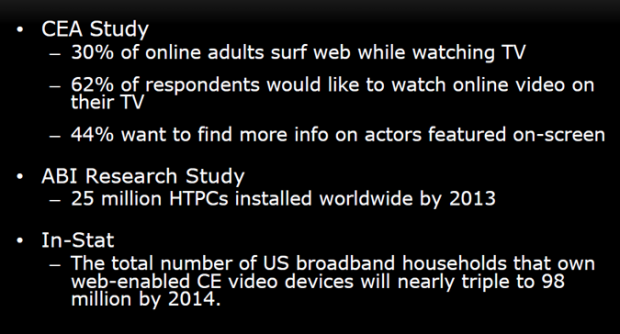 On the surface it looks like it is one of age, as the "PC (this includes Mac users) Generation" grows up and reaches their 20's they begin to have disposable income. This generation has been raised on YouTube, On Demand Programming and ripped music and video (it was right in the middle of the digital content era's dawn). They are much more socially connected on the computer and the internet (and even on their Phones). They are looking for a way to combine their PC experience into their regular media experience. Makes sense, right?

Well, it does, but it is not the whole equation. In early 2002 Microsoft released Windows XP Media Center Edition (MCE). This software was intended to bring the PC into the living room with the help of the DVD-ROM, the TV Tuner and the 5.1 Surround Sound audio card. Unfortunately MCE was horribly buggy; there were very, very few decent HTPC cases and the associated hardware still needed far too much cooling from overly loud fans to truly fit into the living room of the average home. 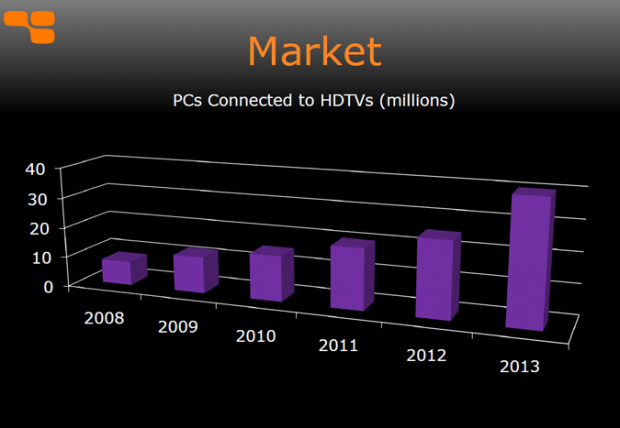 It was not until 2004 or so that the idea of the quiet and attractive PC for the living room really started to take off. However, it was still a small segment of the market and Windows XP MCE was still just as buggy. There were alternatives, though; you had options like SageTV that helped to fill many of the short comings of MCE part of Windows. With these items it looked like there was a turning point. More case manufacturers began to design enclosures specifically for the living room. Cooling systems moved to high air flow, low noise.

In 2006 (it was released for retail sale in January of 2007) Microsoft released the first OS that incorporated a core application intended for Media Consumption; the ill-fated Windows Vista. Vista was hobbled (once again) by some poor choices on the part of Microsoft and pressure from the MPAA (Motion Picture Association of America), but if you had a TV tuner, a decent audio card and a DVD-ROM, you had all you needed for a home media center. With Windows 7 Microsoft improved their offering; they removed much of the DRM routines that hobbled Vista, added in HD-DVD support into MCE and even allowed a direct plug-in for Blu-ray using a third party software like Cyberlink's PowerDVD.

But Windows is not all; we have watched a rise in Digital Content distribution services like Hulu, NetFlix, Amazon, TV.com, and even the network stations are getting involved as ABC, NBC, and CBS offer streaming video for free. In fact, there is a large movement for the rebroadcast of live TV over the internet. A few landmark legal cases have been won showing that companies currently doing this are within their rights to do so as long as they pay the normal licensing fees.

On the hardware side, the days of the HD GPU are here. Even on the low end we find 1080P capable components like NVIDIA's ION and AMD's 4290 GPU. These come complete with HDMI and/or Display Port for video and 5.1 audio output. Even more than HD capable GPUs we are seeing an increase in very low power CPUs that can run with no active cooling like the Atom from Intel Nano From VIA and with improvements from ARM we might see them very soon. High quality audio is also becoming more available, even from OEMs that recognize the need for these new products in low profile formats. Companies like ASUS manufacture discrete GPUs, audio cards and TV Tuners that ship with half-height tangs for slim PC enclosures.

In short, we are at a time when market demand, market awareness and technology have all combined to bring the PC into the living room and become a major source of entertainment.

But all is not pizza and beer; if you are a digital content consumer you know that often you have to switch back and forth between the services you like. If this is on the TV in your living room it means the need to keep a keyboard and mouse handy to type in URL's or use a clunky virtual keyboard with either an MCE remote or someone else's InfraRed (IR) system. Even then things are not all that easy to control; Hulu's service does not work with the MCE remote, nor does ABC.com; etc. etc. - With the more media services available, the harder it is to keep up on a single PC. Windows MCE integrates some internet TV and Netflix, but not much else. In fact, this has prompted many TV manufacturers to add these functions into the TV. Of course, many of them are limited in functionality, but they are there.

What is needed is a compliment to the systems in place; something that can combine the various services and options into one easy to use format. We think we may have found this system with GlideTV. When we first heard about it we were understandably interested. I personally have four HTPC systems running in my house. Each of these is connected to my network and a centrally located NAS for sharing videos, music and other content between them. We have subscriptions to Hulu, NetFlix, watch PBS documentaries...well, you get the picture. I wanted to know more about this technology and to see how it would fit into the modern Digital Home. We got our chance with a phone conversation that took place recently. 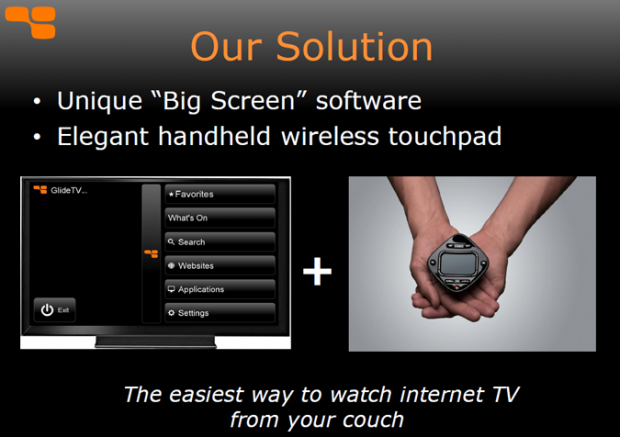 We spoke with Scott Vouri, formerly from NVIDIA, about GlideTV and what it brings to the table. GlideTV as a company was founded in 2008. It is comprised of engineers from Sony, NVIDIA and SageTV. This is a group of people that know how to bring digital entertainment to you. It was and is still funded by Angel Venter Capital money. GlideTV looked at the market with its new digital content trends and realized there was a gap. The services are there, the content is there, but there is nothing to bring it all together on the PC for viewing on the TV. They created the GlideTV software and Navigator remote appliance to fill this need. 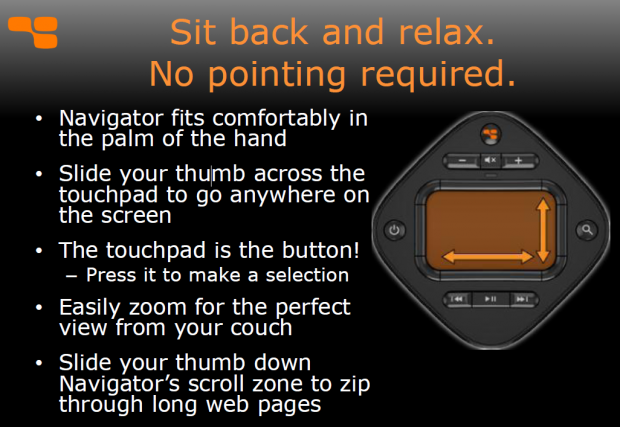 This is a combination of a free to the public software component (http://glidetv.com/download) and an optional hardware remote that comes with a price tag of $99.99. With the GlideTV Java based software component you have a central application that can link all of your digital content in one clean and easy to use UI. Here you can quickly access internet content providers like Hulu, Amazon VOD, YouTube and many others. You can combine favorites, search (and browse) the web. The links inside the application open your default browser to access the sites rapidly.

The hardware side is the $99.99 Navigator. This RF (2.4GHz) wireless device allows you to comfortably and easily control the Client App on your TV. As you can see from the images below, the Navigator is built with ergonomics in mind. The rounded bottom should fit easily in your hand while your thumb is poised over the track pad in the center. It ships with its own RF receiver for which has a listed range of around 35 feet (with no line of sight requirements). This should remove the need to "aim the remote" to get things going on your TV. With backlit buttons, single click controls, and (as we mentioned before) a track pad, it is intended to give you a much more comfortable way to access your content. As the Navigator also comes with a charging cradle and can work with MCE, iTunes, Boxee and even the PS3, you also can eliminate the need for all those extra remotes. 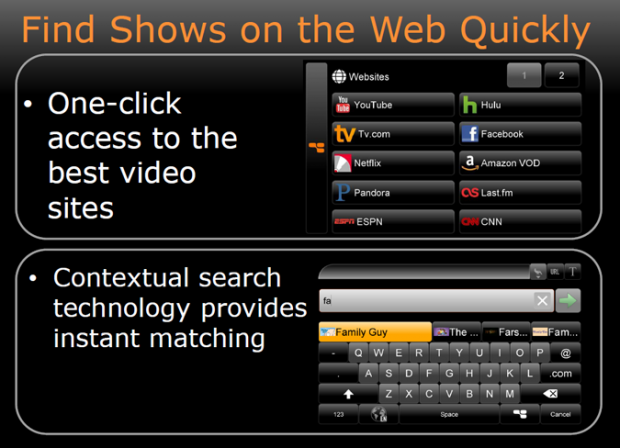 When you combine these you have what has been missing from the digital content ecosystem. You would no longer have to gather everyone around the PC in the den or around the laptop in the kitchen to view pictures on Flickr, or that great video on YouTube. Now you can sit back on the couch and watch it on the same TV you watch all of your regular content without the hassle of having to maintain a keyboard and mouse for navigation. This is something that I have personally been looking for. I hate having to get up and walk across the living room to type in a URL or to click through to the next video on PBS or ABC.com. Now the Navigator will take care of all of that for me.

We asked Scott about plans to integrate live TV viewing (with the use of a TV tuner) into the GlideTV software and we were surprised to hear that it will not be needed. GlideTV and the Navigator work seamlessly with MCE and become a perfect complement to MCE's limited functionality.

Scott also told us that they have plans to add to GlideTV's capabilities in the near future. They are looking to add in a "what's on" feature that will allow you to see content from all over the internet as a simple visual display that can be sorted by category or genre. From there clicking on the image will give you access to the content in question. GlideTV is also working on building a 3D tab function. This will create static tabs for the different applications or websites that you may have running. These can be quickly scrolled through to move between each. It leverages the multitasking capabilities of the average PC to turn your TV into something much more than it is.

After our hour long conversation with Scott, we have to say that this new technology and service will be very welcome in the HTPC and Home entertainment market space. We are looking forward to playing around with the Navigator once we can get our hands on it. We have already installed the current version of GlideTV and are very impressed. It is looking like GlideTV has the potential to move digital content viewing from the relatively small and singular viewing experience of the desktop PC/Laptop to the big screen multiple viewer experience of the living room TV set. If so, we may see an even bigger increase in HTPC sales and technology which will probably eclipse the smaller and more limited HD Media players and Net enabled TVs that are merging.

We hope to provide you with a much more hands-on opinion of this in the very near future, but for now we can say that the concept is brilliant and the software experience so far has captured our attention.