I will be honest with you... I've never used a monitor arm before. I don't know why, but I've just never thought I had the need. I have personally purchased and owned at least 250 monitors over the last 25 years, and anyone that knows me in person, knows I'm a huge display nut. 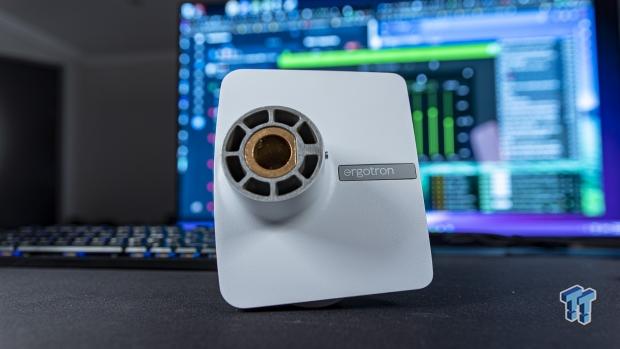 But then things changed when I started receiving the fleet of 43-inch ASUS ROG gaming monitors and needed to get them off my desk. I purchased myself a TV stand on wheels which gave me some awesome flexibility with my display, and over two years later here I am... picking myself up an Ergotron HX Monitor Arm.

I've been wanting to play around with a monitor arm for a while, so I thought it was about damn time. I initially purchased the Ergotron HX Monitor Arm for my 43-inch ASUS ROG gaming monitor, but used it with a few different display sizes and weights for the purposes of my own curiosity, and this review.

There are plenty of monitor arms on the market, but I didn't want to just get anything -- I wanted something high quality, that could handle the weight I wanted to put on it, and give me as many features as I could get. This is what led me into the arms of the Ergotron HX Monitor Arm.

The Ergotron HX Monitor Arm is a super-high-quality monitor arm from start to finish, with everything you need in the box, an easy installation that had me up and running in less than half an hour, and flexibility in more ways than one.

I did want the matte black version of the Ergotron HX Monitor Arm, but it was only available at Scorptec -- the Australian e-tailer I purchase my computer goods from -- only had it available in white. Once it was out of the box and installed on my desk and monitor, I realized it didn't matter all that much... I can only see a portion of the monitor stand itself when I'm looking at my monitor. 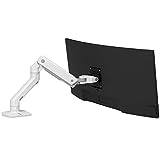 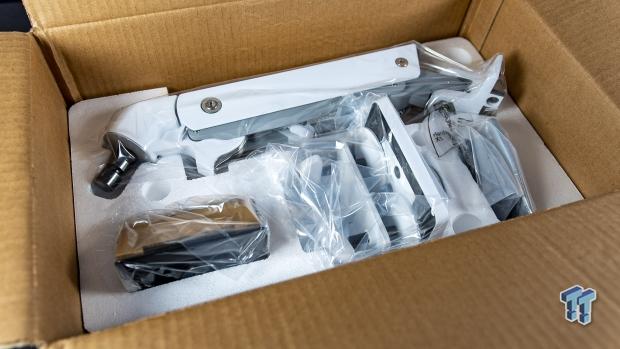 In the box, you've got everything you need -- neatly packaged, and ready to go. Ergotron keeps it simple, with no fancy packaging on the outside. Just a plain-ish-looking cardboard box, but it doesn't matter -- this isn't a graphics card or motherboard box that you'd keep.

Right out of the box, you've got a very Apple-like finish from Ergotron -- all style with the HX Monitor Arm. 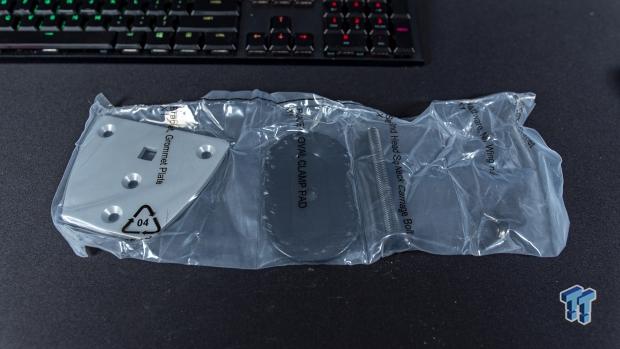 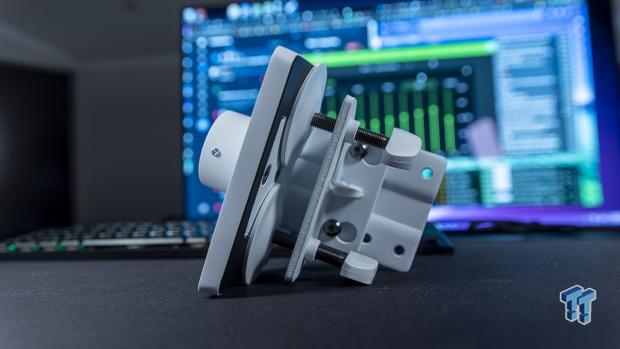 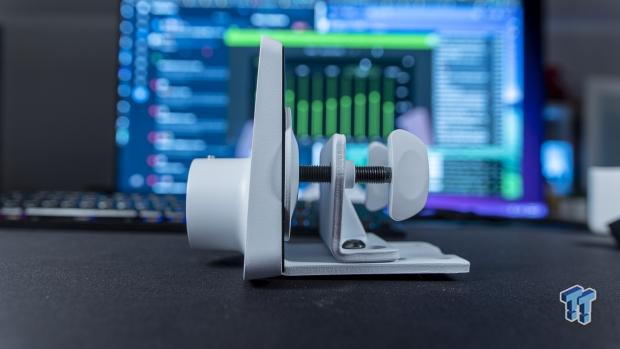 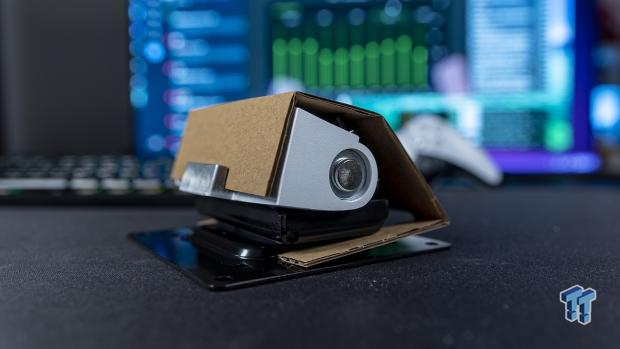 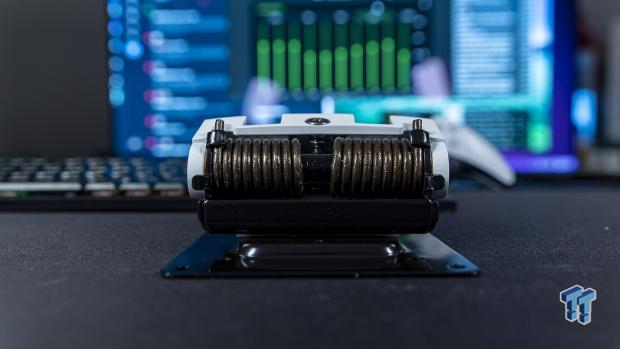 The metal clamp that attaches to your desk is hefty, and feels super-heavy in your hands. You'll need that quality + weight to the clamp and arm, in order to hold a large super-ultrawide or heavy monitor. There's also more mounting hardware and accessories packed away individually, making installation easy. 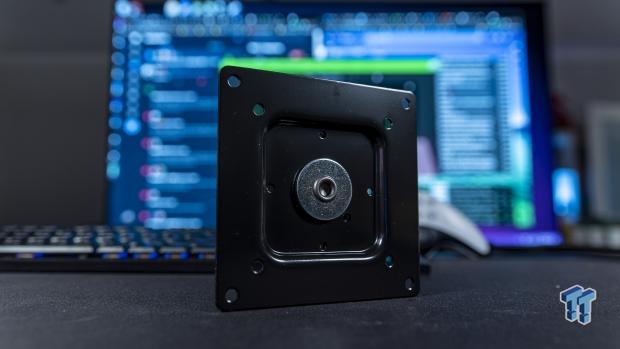 Ergotron includes a VESA mount for your monitor, but you'll need to make sure that your monitor is VESA compatible, as you can't just put any monitor onto a monitor arm. You might need a VESA mount adapter, but some monitors include them in the box -- your results will vary here. 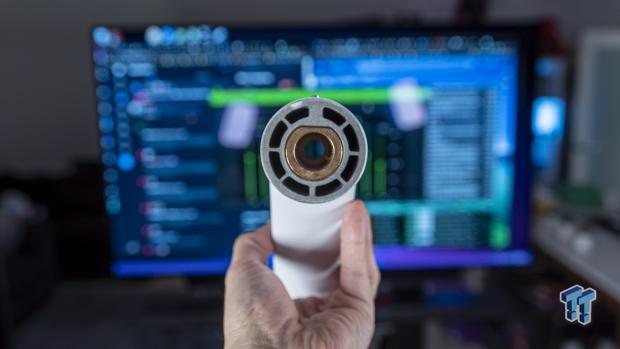 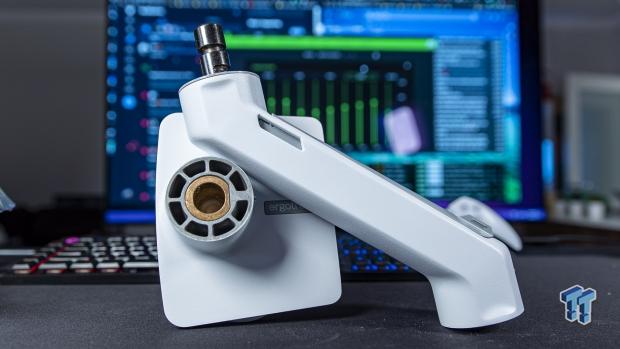 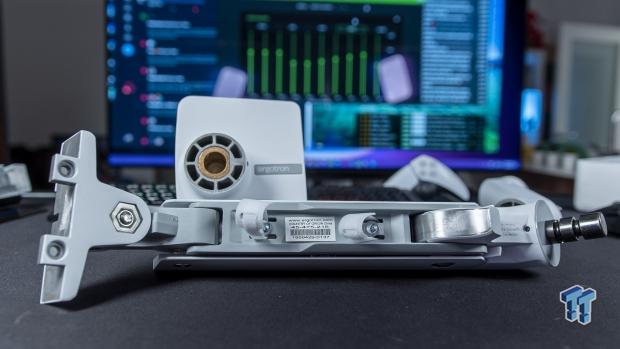 Here you've got the Ergotron HX Monitor Arm and its desk clamp as well as the monitor arm -- baring all in its white design.

The desk clamp and monitor arm look like they'll take hours to build to someone who hasn't done it before, but you'll be surprised at the ease of installation of the Ergotron HX Monitor Arm. You've got the screwdrivers and tools required in the box, and a handful of screws will be required.

You will not need to screw this directly through your desk, so don't worry about that. 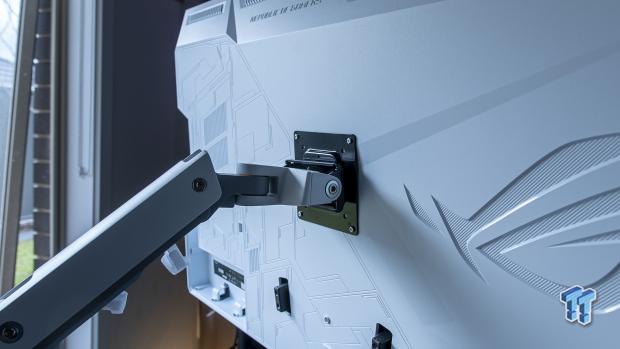 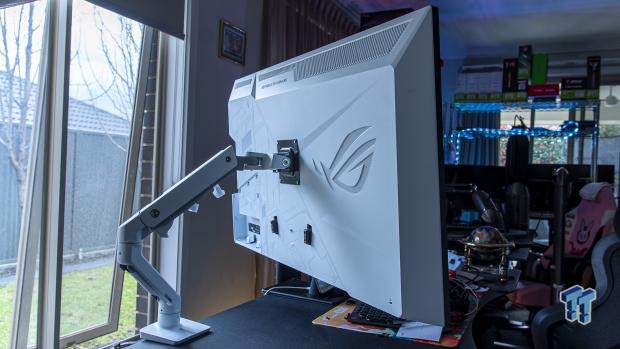 Ergotron's HX Monitor Arm was easy peasy to install and handle the large ASUS ROG Strix XG43UQ gaming monitor, a 43-inch 4K 144Hz HDMI 2.1 beast. You can read my review on the ASUS ROG XG43UQ gaming monitor here. I thought I'd have an issue with it, but there was no issues at all with the 43-inch display. I've seen others use the Ergotron HX Monitor Arm with the 49-inch Samsung Odyssey G9 super-ultrawide gaming monitor... something I now want to try now that I've got this kick-ass monitor arm. 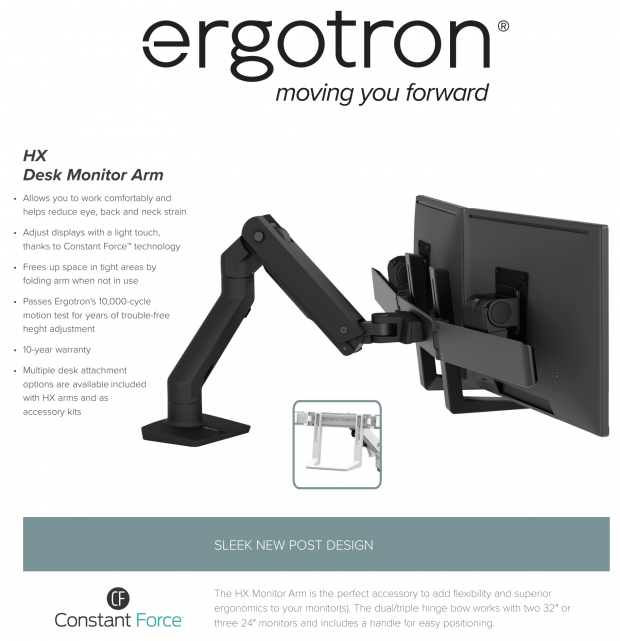 The Constant Force technology gets a big mention here, as it truly does give you a light touch adjustment to your monitor. There's no massive amount of force you need to apply, once you've tweaked the Ergotron HX Desk Monitor Arm to your specific monitor, you're able to move it with ease.

I found this particularly useful between working and gaming where I might slouch back when I'm gaming, and adjust my electronic standing desk. 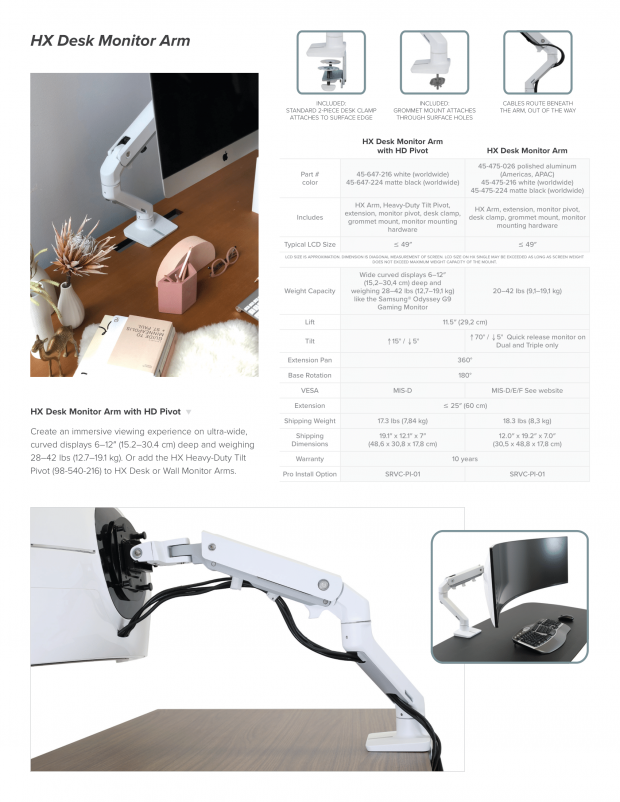 Ergotron recommends using a maximum of a 49-inch (Samsung Odyssey G9 for example) which would be absolutely wild on the HX Desk Monitor Arm. I've used a 43-inch ASUS ROG Strix XG43UQ gaming monitor on the Ergotron HX Desk Monitor Arm without a problem. Impressive, given that it's a chunky monitor.

Inside of the box, you'll get the HX Arm, Heavy-Duty Tilt Pivot, extension, monitor pivot, desk clamp, grommet mount, and the monitor mounting hardware. It looks like a confusing mess when you open it, especially if you haven't used a monitor arm before... but you'll get it installed in less than 30 minutes. 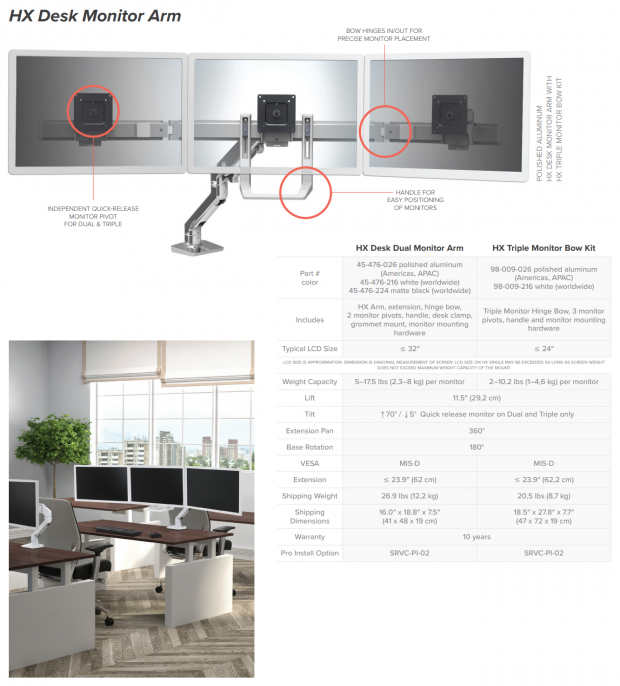 Ergotron recommends that the HX Desk Monitor Arm can handle a monitor that weighs up to 8kg, but my ASUS ROG Strix XG43UQ weighs 15.5kg and it was fine... I'm typing this review with the ROG Swift PG32UQX gaming monitor, which is also fine and that weighs 11kg.

Ergotron's engineering is impeccable down to the smallest details, where a screw in the base mount of the arm can be screwed in -- and when this is screwed in, it limits the rotation of the lower section of the Ergotron HX Monitor Arm to 90 degrees on the left, and the right. This means the Ergotron HX Monitor Arm can't turn around too far and damage your wall for example, as it won't pass the end of your desk.

If you are someone who has your desk right up against the wall, normally a monitor arm can't be used as you would be denting and scratching your wall all day and night long. Not with the Ergotron HX Monitor Arm, it's such a powerful little thing, but Ergotron has your back. I didn't use this as the back of the desk -- at least the desk I was using during the purposes of using the monitor arm -- but it is something I want to visit with a desk against the wall soon. 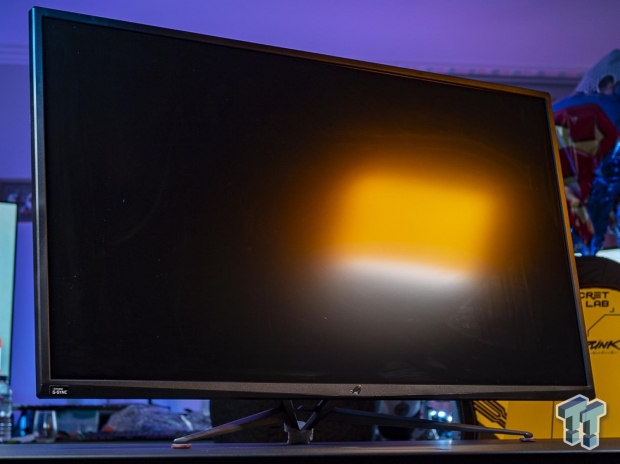 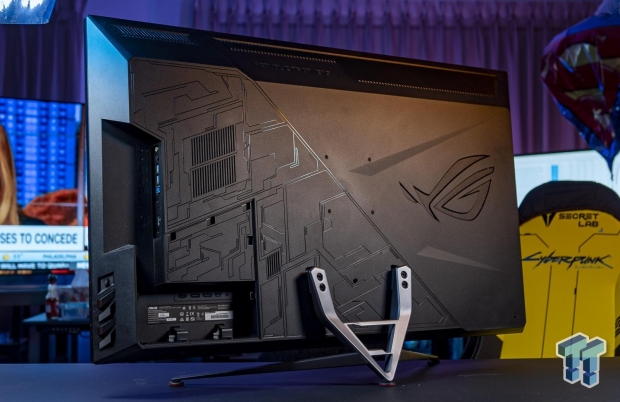 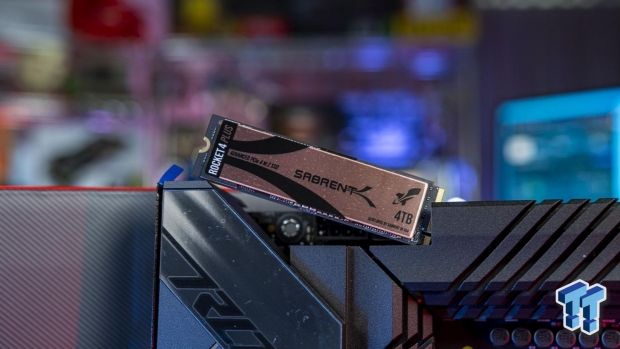 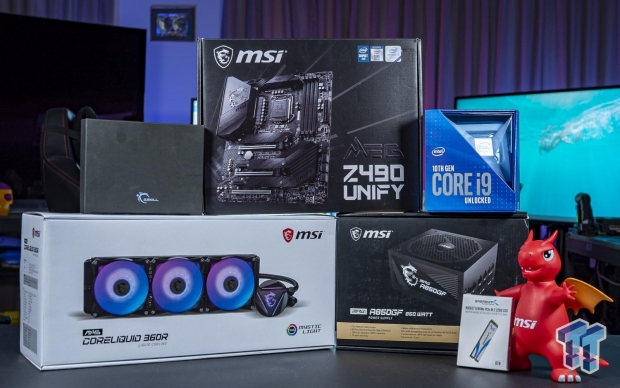 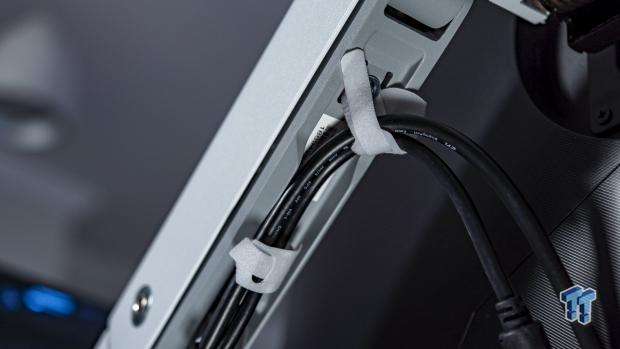 I never knew that I wanted or needed a high-quality monitor arm in my life, but now I do... and I feel so silly for not having one earlier. I genuinely feel silly for now buying one myself earlier, but now that I have one I won't be giving it up. 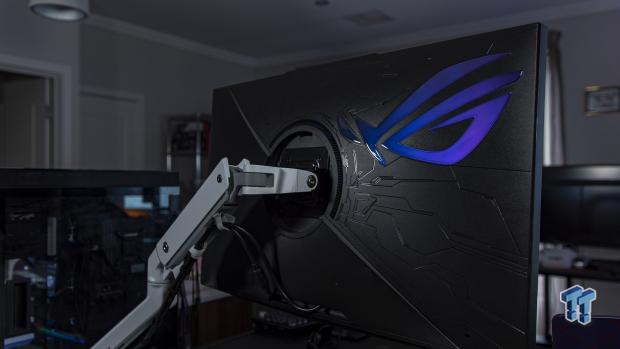 I actually want to dive into more of them and would love to have a monitor arm for each of my displays, and I have around 7-8 that I rotate between systems and tech benches. Ergotron has totally blown me away here, and I think there's a major problem. Now that I've used a high-quality monitor arm, how could I use anything else?

Ergotron has a product here that will completely change the way you use your PC, for all uses: normal use, workstation use, and gaming. It's not just limited to workstation or gaming users, as everybody will want to move their monitor -- you just don't know it yet, not without a monitor arm.

If you have limited desk space and wanted the monitor off your desk, with the ability of movement -- which is so simple at the same time -- then the Ergotron HX Monitor Arm is a simply fantastic product. A no-regrets-changes-your-life purchase, with Ergotron with you for the long haul -- especially when you have a huge 10-year warranty behind you.

Ergotron's premium HX Monitor Arm is a heavy-duty mofo that I seriously, very seriously don't know how I lived without it. Damn it, now I need another 3 or 4 of them, they're that good.