We started out the year by reviewing the Lockerstor 8 or AS6508T, an appliance designed for power users built on the Intel Atom platform offering eight bays with connectivity over both 2.5 and 10Gbe.

Taking this up a notch, ASUSTOR has launched the Lockerstor 10 Pro (AS7110T), the quickest NAS they have ever produced. This appliance is still built on an Intel platform but up a pay grade to the Xeon E2224 Quad Core operating at 3.4GHz with boost to 4.6GHz. ECC memory is supported with 8GB included and supports up to 32GB.

SATA connectivity is spread across 10 3.5" bays that include support for 2.5" drives as well. You will also find 2x m.2 2280 slots in the mezzanine of the chassis. This NAS supports a peak internal capacity of 160TB with expansion up to 22 bays via the 6004U. This allows the Lockerstor 10 Pro a massive 352TB peak capacity. I/O connectivity includes both USB 3.2 Gen 1 on the front of the unit and Gen 2 on the back along with three 2.5Gbe ports in red and one 10Gbe port in black. 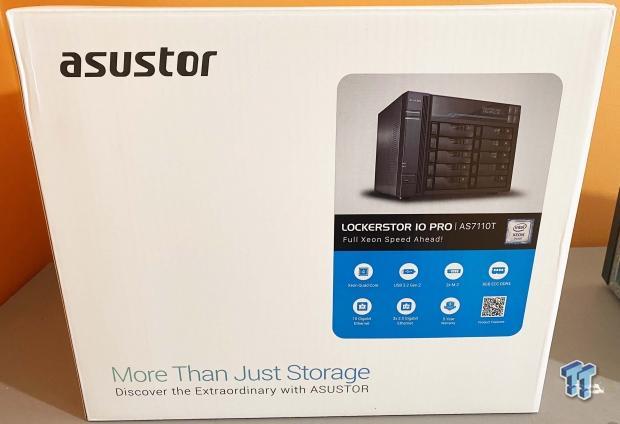 The packaging doesn't get too far off track, though ASUSTOR does make a note of the Xeon inside along with several other key features on the sticker to the right. 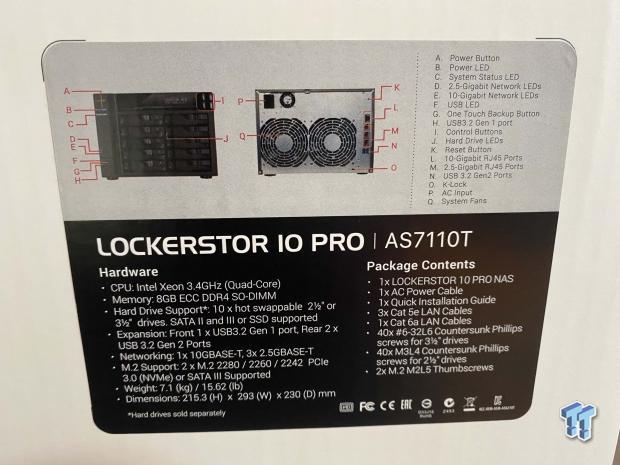 On the rear of the box, you will find the hardware and package contents listed on another sticker along with an outline of the system ports above. 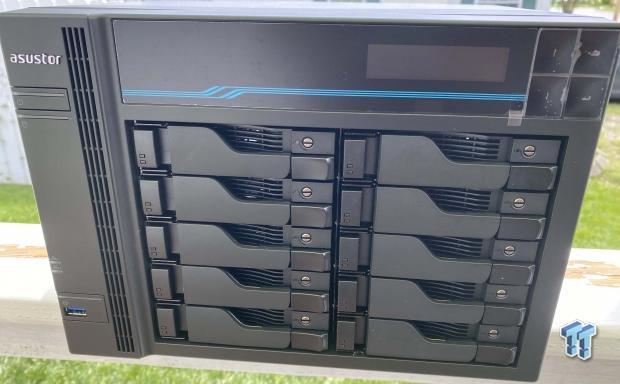 The Lockerstor 10 keeps with the same chassis design, small screen at the top power button to the left, and all ten bays below. We do have a USB 3.2 Gen 1 port for quick backups at the bottom. 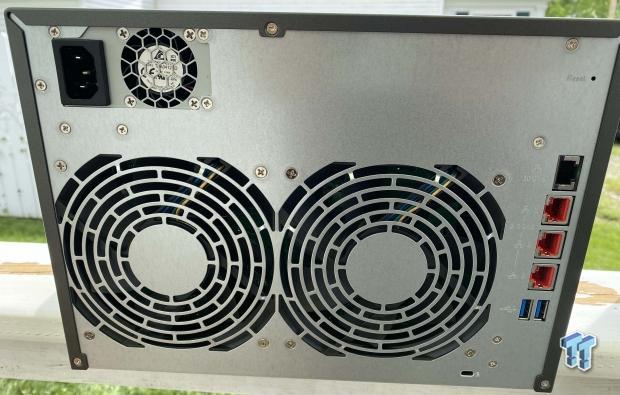 On the backside, the largest feature is the dual cooling fans. Up top, we have the power supply and input and to the far-right connectivity with a single 10Gbe at the top in black, followed by three 2.5Gbe port in red. USB 3.2 Gen 2 rounds things out with two ports for high speed 10Gbps expansion. 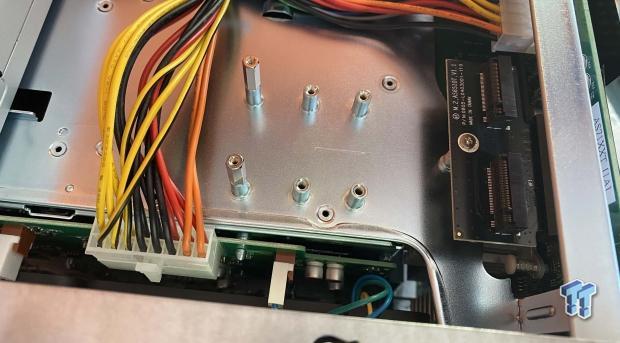 Internally, we have two m.2 slots that support NVMe and AHCI drives in the 2242 to 2280 form factors.

On the outside of the motherboard, we do have a single SO-DIMM slot available for adding memory. 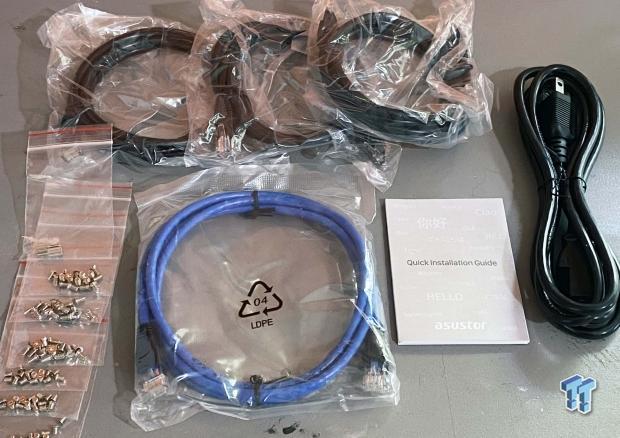 Accessories include several cat5 cables for use with 2.5Gbe and one blue cat6 cable for 10Gbe. A plethora of drive screws and the power cable are included as well. 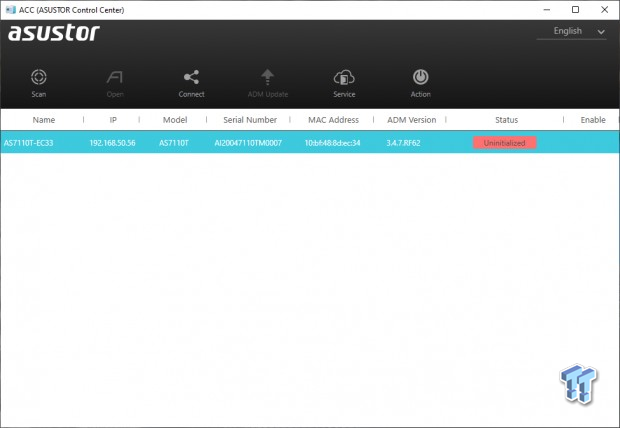 The setup hasn't changed too much for now. ACC or ASUSTOR Control Center is still the preferred method of finding and setting up. 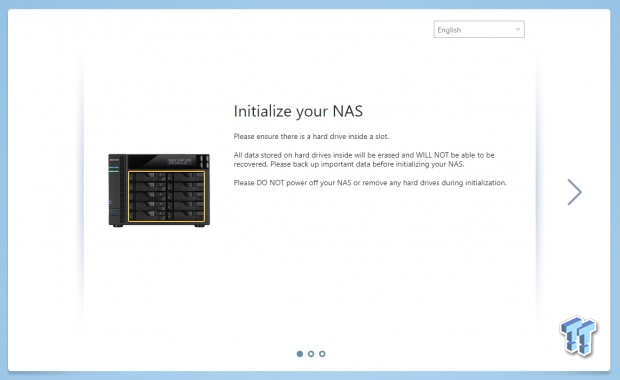 Moving through setup, we start with the greeting above. 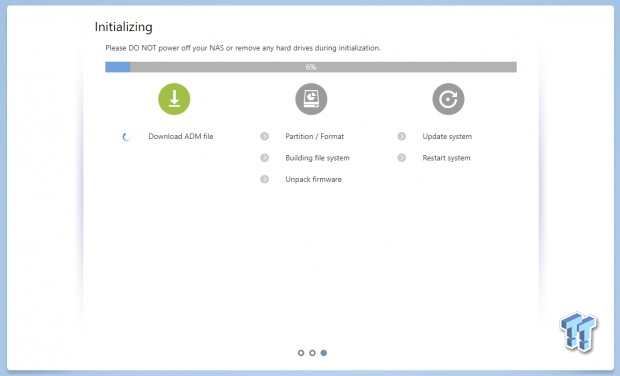 Configuring the NAS to your liking, we reach the initialization phase that takes only a minute or so. 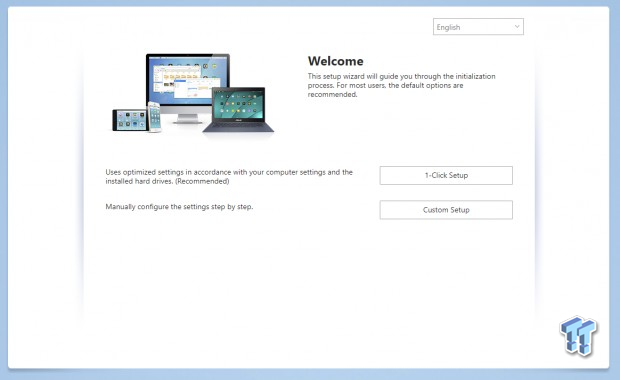 When going through setup, you have the option of a complete manual setup or a one-click system ASUSTOR has developed. 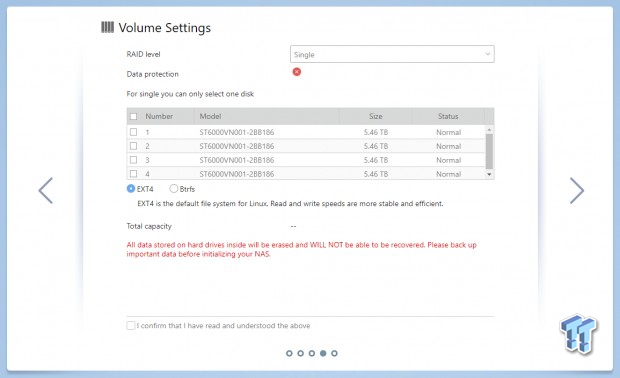 Following manual setup, we select our drives and the RAID mode we want to use along with either EXT4 or BTRFS filesystem.

A few moments later and a reboot, we land at the ADM desktop. Here we have shortcuts to all the main features of the NAS, including the App Center, Storage, File Explorer, and Settings. 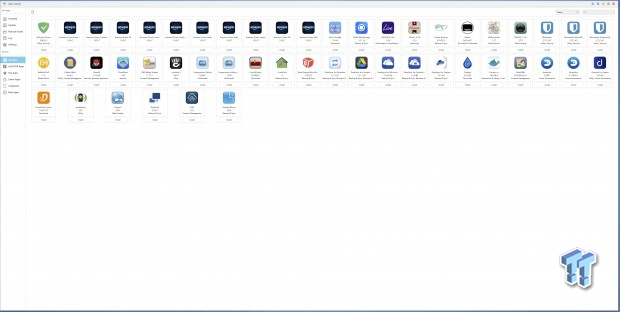 The App Store is slowly growing in size for ASUSTOR, above we have all app available for the Lockerstor 10 Pro. 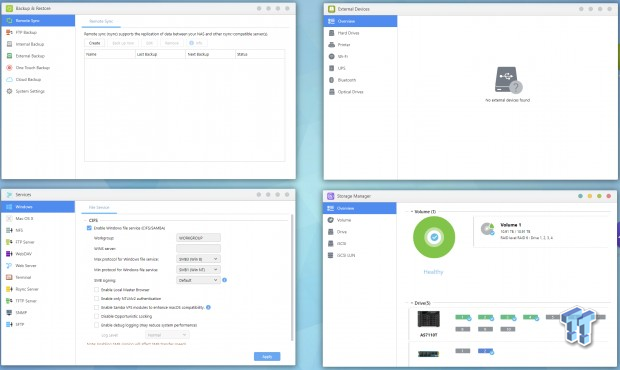 ADM allows you to have multiple windows open at a time, as seen above, this allows you to explore backup services like Rsync or Cloud backups along with external devices you may have connected. To the bottom left, we have file services and storage manager next to it. 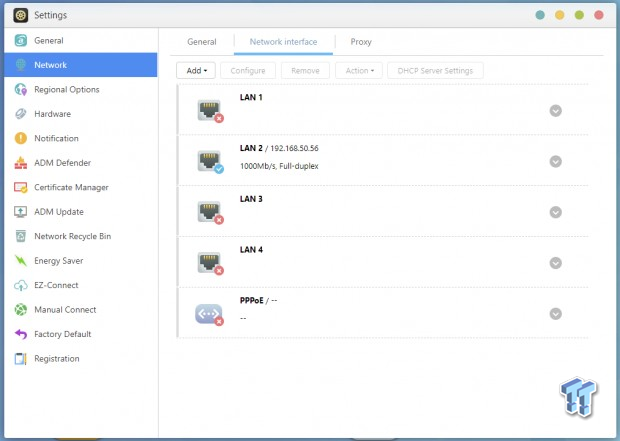 The settings window offers support for network options, among others, including interface settings.

With the Lockerstor 10 Pro being such a powerful appliance, I took the time to test every ethernet speed I could. For this review, it includes 1Gbe through 10Gbe with an added SSD cache run while using 10Gbe. Of importance is the fact we only had 4x drives in use for this 10-Bay platform. 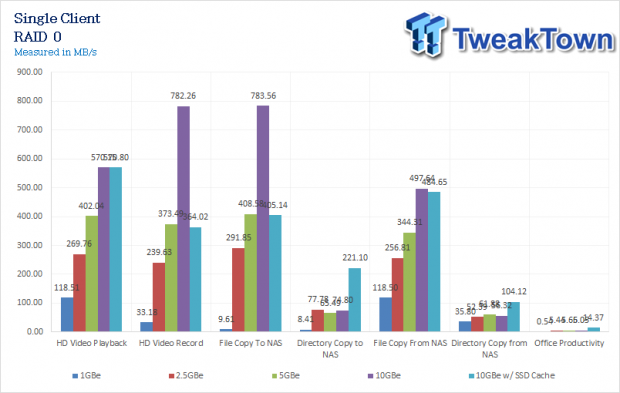 Starting our testing with RAID 0, we see solid performance scaling by interface all the way to peak performance in video playback at 570 MB/s with 10Gbe. Video record scaled a bit higher up to 782 MB/s along with file copy. Adding SSD cache to this scenario did not improve performance. 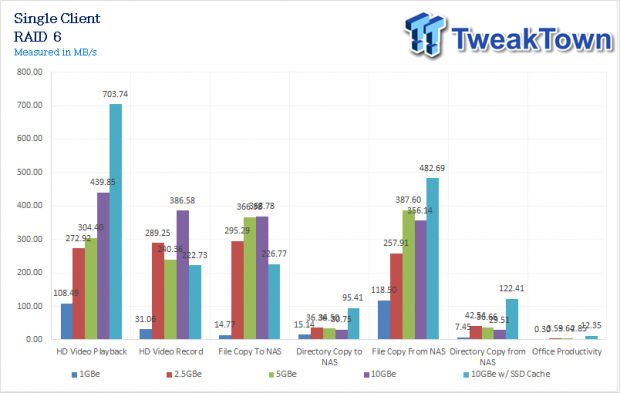 Switching to RAID 6, we see scaling by interface to a peak of 439 MB/s in video playback. Video record hit 386 MB/s and file copy 366 MB/s. SSD cache did appear to help with Playback and Read operations from the NAS. 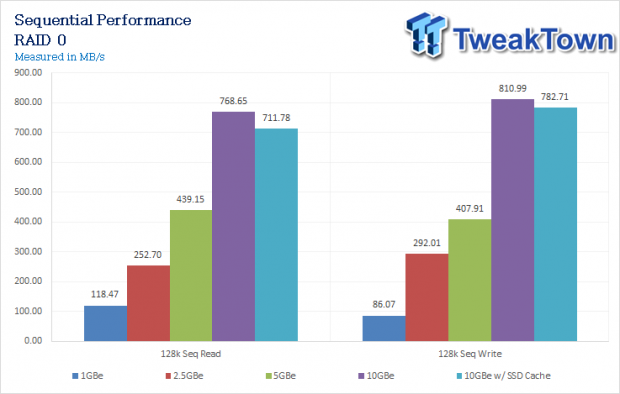 Moving into sequential performance, the Lockerstor 10 Pro offered solid performance with just four drives, peaking at 768 MB/s read with 10Gbe. Write performance was similar with a larger boost from 10Gbe up to 810 MB/s. 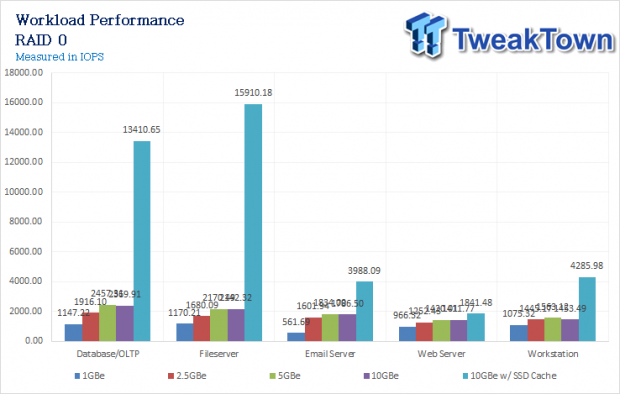 SSD cache on the Lockerstor 10 Pro helps immensely with SMB workloads, as you can see from the chart above, Database and Fileserver topped out at 13410 IOPS and 15910 IOPS, respectively. That nearly 6x the performance of four drives in RAID 0. 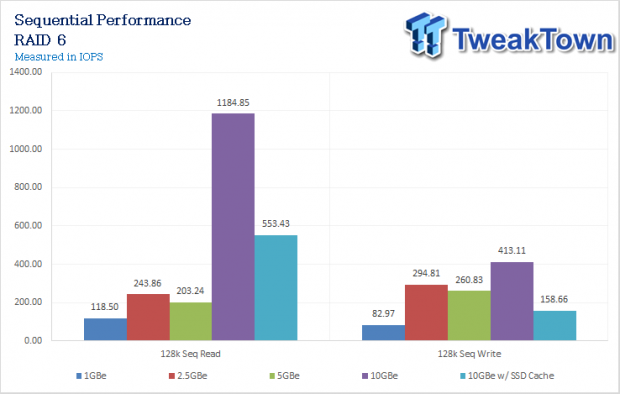 Switching gears back to RAID 6, sequential performance topped out at 1184 MB/s read with 10Gbe. Write performance was a bit lower with peak performance at 413 MB/s. 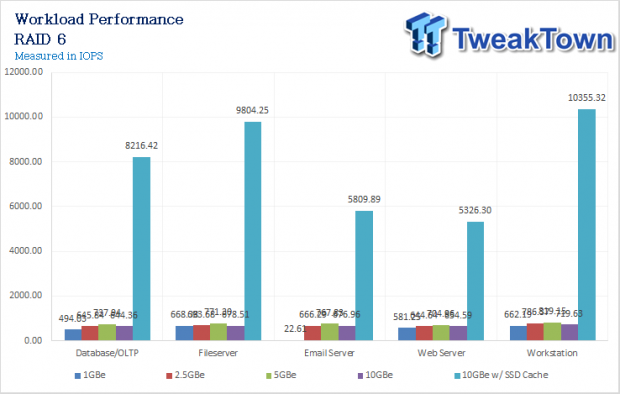 Moving into SMB workloads with RAID 6, again we see a solid boost in performance from the SSD cache with otherwise consistent performance across all ethernet connectivity speeds.

With this being the second Lockerstor platform to come through, I can certainly say ASUSTOR is going all in on these platforms with top-end connectivity from USB 3.2 and standard 2.5Gbe most even having the option for 10Gbe. The chassis design has not changed much but does offer a fantastic matte black exterior with ample brightness from the power and drive LEDs.

Storage performance is among the highest I have seen, and being 10Gbe, it only makes sense. That said, what's better is the clear performance scaling we can see even with only four drives, across each bump in ethernet speed. This can be seen at its best in single client testing with 1, 2.5, and 5GBe hitting the limits of the interface in video playback tests using RAID 0.

In our testing, SSD Cache did not help and actually hurt performance if enabled, so it's best not to check the box for these types of scenarios in RAID 0. With that said, there is a caveat; RAID 6 showed a decent improvement in sequential with the addition of SSD Cache enabled mostly in large file workloads that see a heavier read output from the NAS, for instance, file playback or batch copying from the NAS to a secondary machine.

SMB workloads found peak performance with 5Gbe around 2K IOPS across the board. The addition of an NVMe cache solution was able to break past the barriers of hard drives with a 6x increase in performance for both Database and Fileserver workloads. These workloads went from 2475 IOPS to 13410 IOPS and 2172 IOPS to 15910 IOPS just by adding and enabling cache. 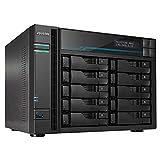 ASUSTOR has put together a fantastic appliance with the AS7110T that not only offers all the bells and whistles including performance, but also pushes the market forward.