When a company such as this is brought up in conversation, two things typically come up almost immediately. The first is that Be Quiet has spent many dollars, much time, and considerable efforts to deliver CPU air coolers with very little noise involved. The second thing that comes up is how beefy and big they are with their 250W TDP models, but many forget that Be Quiet also has a kit for the average user who isn't looking to spend nearly $100 to obtain better than average performance.

In our opinion, with such an established series of coolers, you are going to have to come up with something special, if you want to grab the attention of the masses. For those thinking this is a slight change on the Shadow Rock 2, the Shadow Rock 3 is not that! Everything from the styling, the dimensions, the added touches, the changes to the design to bring it up to date, so much is different, but that is why we are here to break it all down! Even if the Be Quiet coolers of the past have not quite been your thing, with what we have today, the shadow Rock 3 ticks many boxes of what we like to see with an air cooler, but can it hold up under fire? Stick with us and find out if Be Quiet has enough to sway those seeing them as just a silent cooling company! From the information we saw on the Shadow Rock 3 product page, we made this chart to make things more compact and easy to digest. We already know what cooler this is, but Be Quiet starts with the big five things many will need to know about the cooler. We have the 121mm thickness, 130mm width, 163mm of height, and 710 grams of weight, including the fans. The TDP is shown to be 190W, which is plenty for most users, and those potential users are shown below, with the full list of socket compatibility that the Shadow Rock 3 will work with.

The Shadow Rock 3 is cooled with a single Shadow Wings 2 120mm PWM High-Speed fan, which is shown to be 11.5 dB(A) at 50% speed, 17.5 at 75% and 22.4 at 100% fan speed. To find the rest of the fan information, we have to skip ahead a bit, but we do see that this is a standard 25mm thick solution that can top pout the fan speed at around 1600 RPM. Spinning on a rifle bearing, powered with a 4-pole motor, we see everything about power ratings, cable length, and its lifespan, but you have to go to the Shadow Wings 2 product page to find the 38.5 CFM rating and the 0.82 mmH20 static pressure figure. By far, not the most powerful fan on the market, but we see no reason it should not be near silent in regular operation!

The section we skipped covers the body of the shadow Rock 3. The tower is only 96mm deep without the fan attached, bit the width is shown to be the same, but you need to add a millimeter or two for the wire fan clips. The fin array is comprised of thirty aluminum fins, which take the heat away from a set of five, 6mm diameter heat pipes. The pipes are made of copper, and they take their head from the aluminum and copper base, which exposed the heat pipes to touch the CPU directly. We also see mention of surface treatment and Be Quiet shows it to be aluminum. While it could be that that is true, it looks a lot like nickel plating to us. The last thing in the chart, which we have not mentioned yet, is that a three-year warranty covers the Shadow Rock 3, but the fan life is triple that timeframe!

As we like to do, our first stop was at Amazon, where they still sell the shadow Rock 2, it appears that they have no idea what the Shadow Rock 3 is just yet. As an aside to that, the Shadow Rock 2 is still selling for $51.63. So off we went to look elsewhere for the Shadow Rock 3, and we did find it at Newegg. It is there that we saw the price, with Be Quiet listed as the seller, for just $49.90 and another $4.27 to ship it to us. So far, we like what we know about the shadow Rock 3 from Be Quiet, so how about we show it off, and get to the testing, so we can see how well this sub-fifty dollar solution stacks up against all of the other options we have tested! 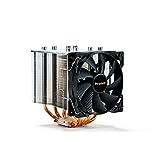