The T-Force Cardea Liquid is the third NVMe SSD released from Team Group using the Phison PS5012-12 flash controller this year. We've already tested the base model MP34 and the midrange Cardea II with a massive extruded aluminum heat sink. Today we move to the flagship series with an innovative liquid-filled chamber â€" that is completely useless. 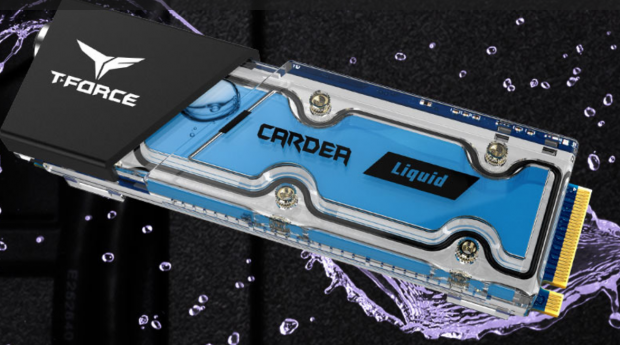 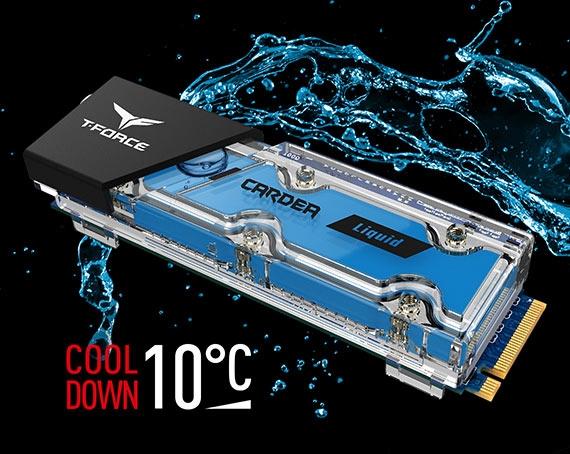 The Team Group Cardea Liquid takes a standard reference design Phison PS5012-E12 SSD, the same used in the MP34 and Cardea II, and adds a plastic shell filled with liquid. A metal plate forms the bottom of the chamber to pass heat from the SSD components to the liquid. A thin thermal material interface pad sits between the components and the metal base. The marketing material shows a 10-degree difference with the cooler. 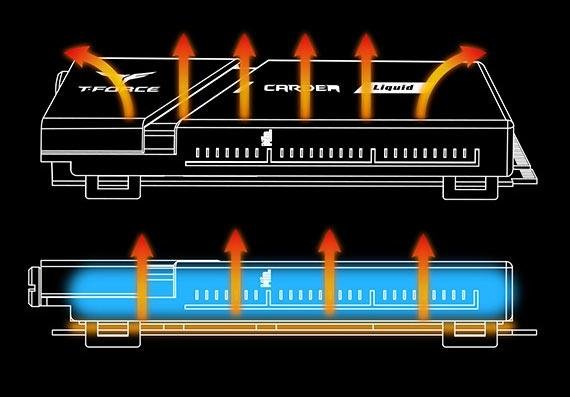 Another marketing image shows heat passing from the SSD, through the thermal material, through the metal place, through the liquid, and finally magically passing past the plastic case and into the air. In reality, the liquid will absorb the heat when the liquid is at a temperature lower than the components.

After the two components reach the same temperature, the liquid without a way to displace heat would actually become an insulator. When the SSD moves to an idle state and generates less heat on its own, the liquid would then actually pass heat back to the controller. This is a negative for the design, but it's still not either of the major issues we found. 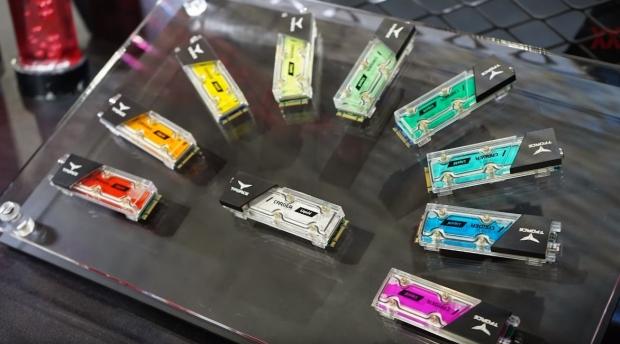 The final part of the design comes from a display at Computex where Team Group showed the Cardea Liquid in a rainbow of colors. It's possible to remove the liquid and refill the chamber with whatever liquid you want. Our sample shipped with blue liquid and modern marketing images only show blue. The drive does ship with extra blue coolant in a small bottle and a tiny funnel to refill the chamber.

The Cardea Liquid comes to market in 256GB, 512GB, and 1TB capacities. The performance and specification list is identical to the Cardea II we tested last week with an aluminum heat sink. The Cardea II is also one of our favorite Phison PS5012-E12 SSDs shipping today.

Like the Cardea II, the new Cardea Liquid has yet to hit North American retails like Newegg and Amazon. Team Group has yet to release pricing details, but in this case, I don't think you will care too much about that.

The series uses advanced LDPC to insure data integrity, and that gives this series strong endurance numbers. The 256GB gives users up to 380 TBW (terabyte writes) under the 3-year warranty coverage. That increases to 800 TBW for the 512GB model and a massive 1,665 TBW rating for the 1TB model.

A Closer Look and Where It Goes Wrong 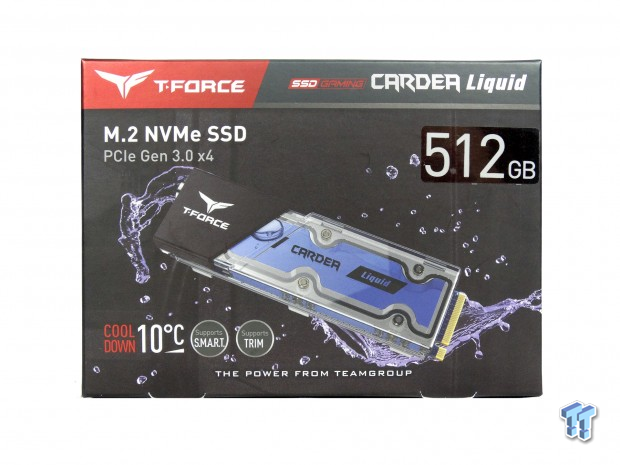 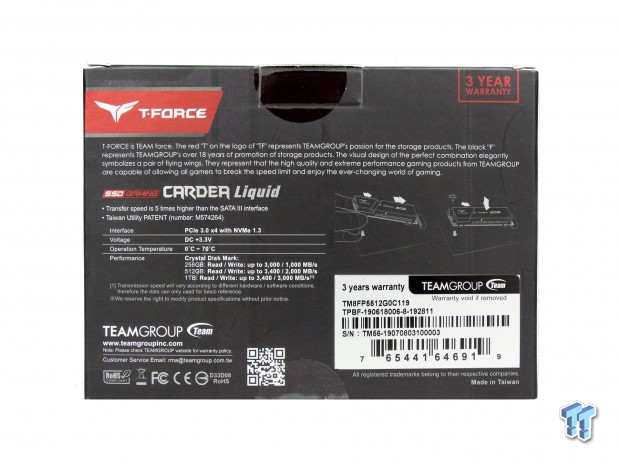 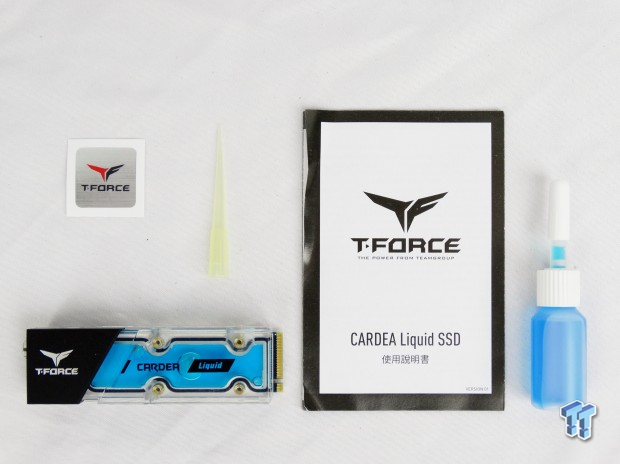 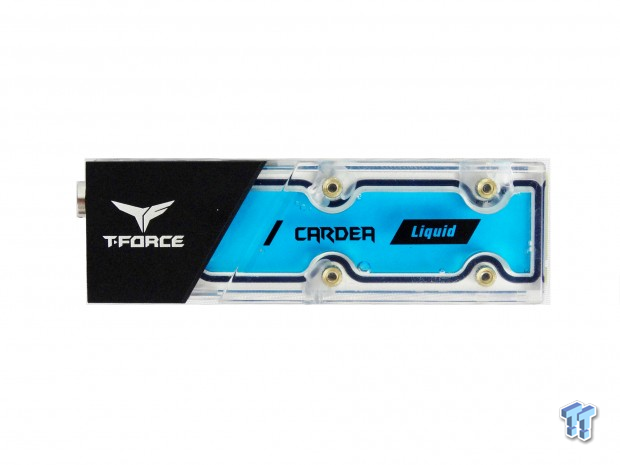 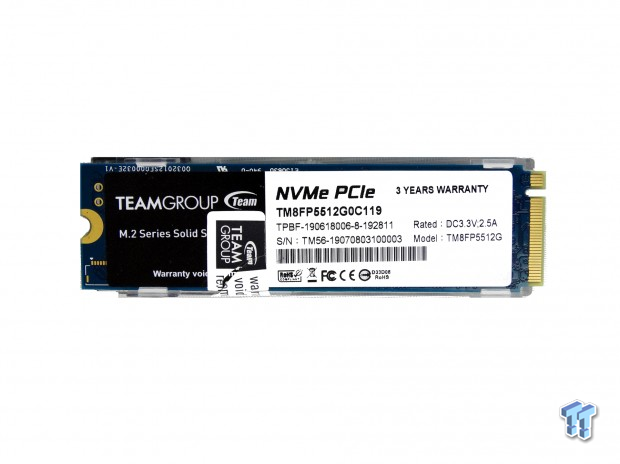 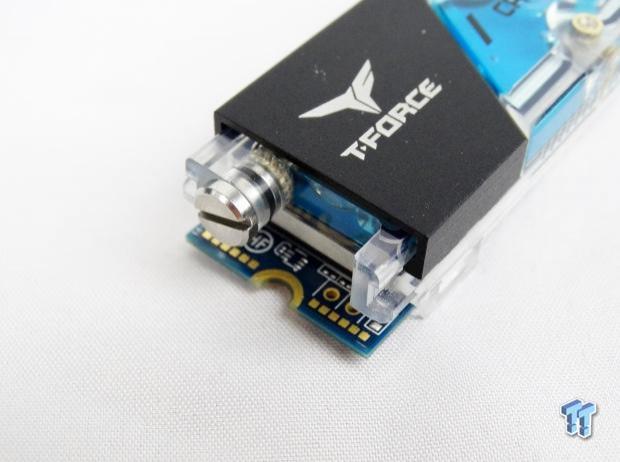 Team Group put together a nice attractive package for the Cardea Liquid. The drive also looks really good, and on the surface, you would believe this is a nice niche product that would look great in your system. The black area at the back slides with a firm click at each end and exposes the filler tap.

Where It Starts To Go Wrong 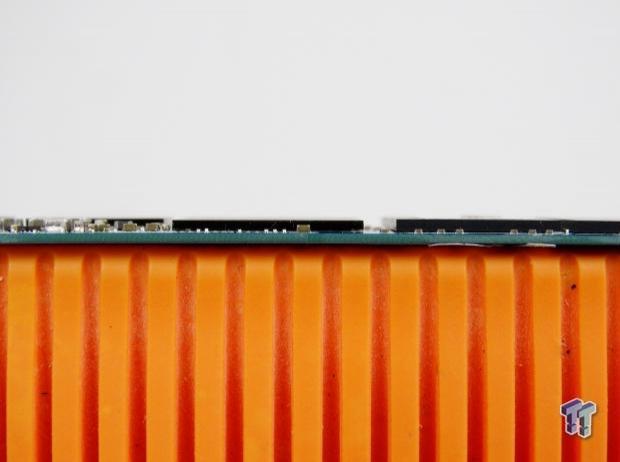 The Phison PS5012-E12 controller uses a 28nm manufacturing process, so the controller is very thin. In this image, you can see its highest distance from the circuit board is lower than the NAND flash packages (on the right) and the DRAM package (on the left). 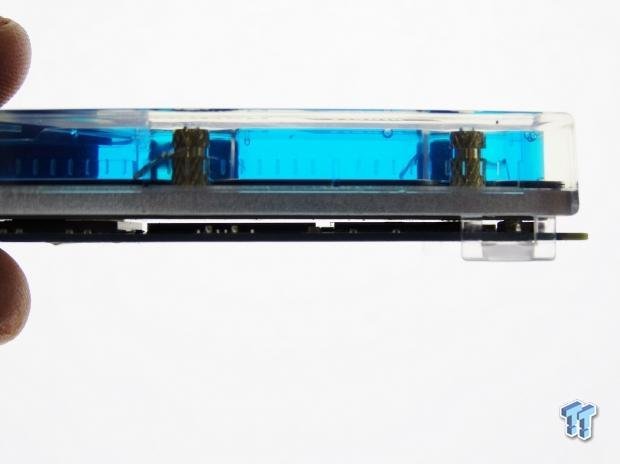 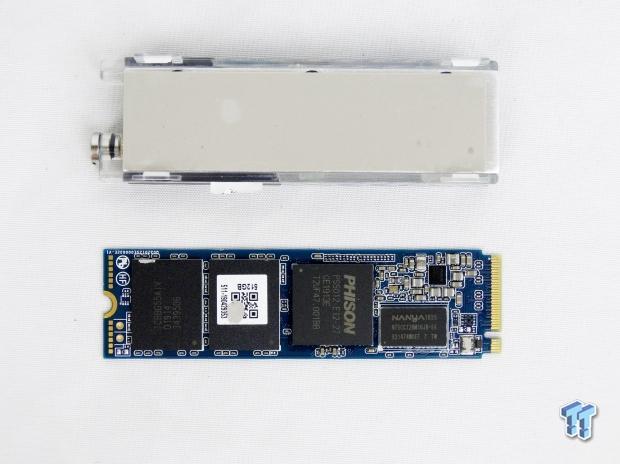 When you hold the drive against a light, you can see right through where the comer should make contact with the Phison E12 controller. This makes the cooler ineffective. It's not just ineffective because it doesn't make good contact; it's literally not doing anything to cool the controller at all.

In the second image, we can see there are only two places where the thermal pad actually touches the surface mount components. The first is a tiny sliver of the far left NAND package where there is very little heat (because in the package the actual die is in the middle). The other point of contact is with the ID sticker on the right NAND package. The sticker alone adds an insulation layer.

There isn't a reason to cool the flash on consumer SSDs. The controller, the square package in the middle with big PHISON spelled on it. When this part reaches 80 degrees Celsius, it throttles, which is a protective measure that decreases performance.

A Disaster Waiting To Happen 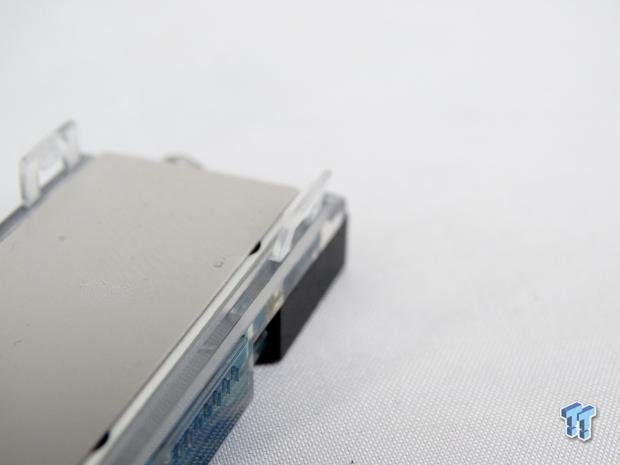 Even though we were extremely careful removing the SSD from the cooler, the plastic tab nearly broke off. We noticed the thin plastic when we started and were very careful about removing the circuit board. 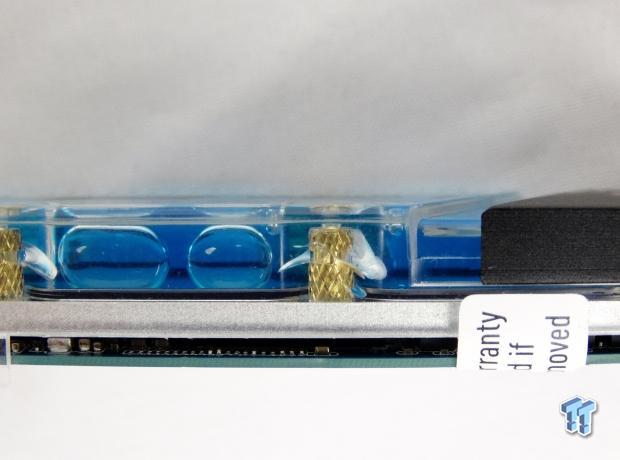 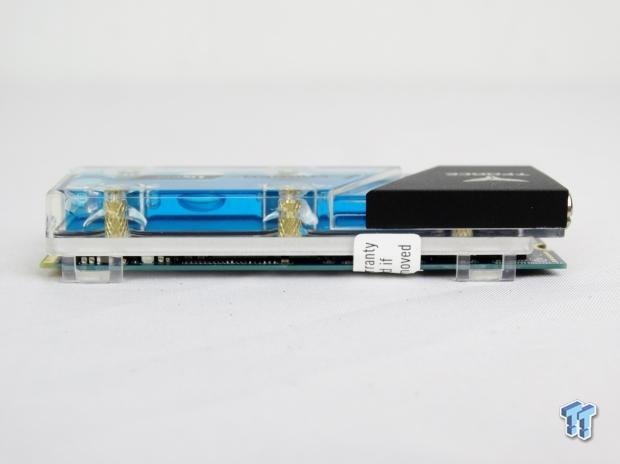 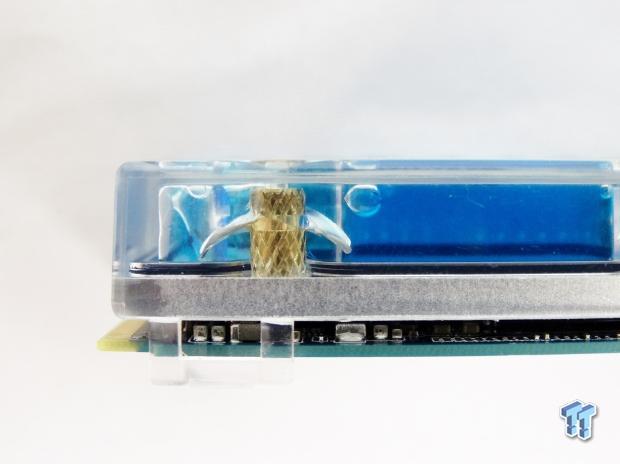 Before we even removed the SSD from the cooler, we noticed stress cracks in the plastic housing. The closer we looked, the more we found. Every press-fitting used to secure the screws that pass through the metal plate to keep it all together has these cracks.

Even though our drive never leaked during our testing, we think over time with the heat cycles; the cracks will spread and eventually cause a failure.

With the nonexistent cooling capabilities of the Team Group Cardea Liquid, I expect the performance to be similar to the MP34. Both drives use the newest firmware from Phison when tested, so the performance profile is slightly different from the early E12 products we tested like the MyDigitalSSD BPX Pro and Corsair Force MP510.

What hasn't changed is the low queue depth (QD) 2 and 4 with these products and our test suite. We only see the issue in the sequential read test. The Liquid's performance line is under the Cardea II's line with both drives delivering identical performance in this burst test.

The Liquid and Cardea II also deliver identical sequential write performance that is only slightly higher than the BPX Pro with an older firmware and much more overprovisioned space.

When we write sequential data to the entire user area of the flash media, we start to see the Cardea II and Liquid separate. The Cardea II has great cooling with a massive aluminum heat sink that actually makes contact with the E12 controller. The Liquid is more of a nonfunctional decoration that doesn't cool the controller at all. Performance-wise, you can see where the cooler allows the Cardea II to maintain high speeds when writing sequential data and the Liquid loses performance rather quickly.

The Toshiba BiCS FLASH is not as fast as Micron's 64L and 96L TLC in low queue depth random read performance. The Cardea Liquid manages to surpass 12,000 IOPS at QD1. That makes the drive very responsive under regular consumer workloads but not as fast as the three at the top of the chart using Micron TLC.

With modern SLC cache on NVMe SSDs, we just glaze over the random write performance. The SLC is so fast that it absorbs the burst writes coming from the host system. Datacenter and enterprise workloads require larger buffers to handle longer and sustained random write workloads. All of the drives in the chart today deliver excellent random performance in burst workloads.

We also see strong random mixed performance with the Cardea Liquid. The drive even outperforms the Cardea II at very high queue depths, but the results are within the margin of error.

All of the drives in the chart today perform well loading typical games. The charts show just a little over a 1-second difference between the drives listed today. We use the Final Fantasy: Stormblood game load test with a discrete video card in an Intel Z270 platform.

The PCMark 8 Storage Test uses nine applications to run ten tests that range from gaming to heavy Photoshop use with everything in between. The Phison E12 drives perform really well in general consumer applications even when the controller doesn't have a heat sink.

The extended test uses the same applications but fills the drives with data before starting performance measurements. The test also preconditions the drives into a deep degraded state to show the worst possible application performance.

We may more attention to the recovery phases where the drives have five minutes to perform background cleanup that is similar to your workload at home and the office. The Cardea Liquid performs well, but the Cardea II with the same controller and a working heat sink delivers slightly more performance under heavy workloads.

The Cardea Liquid doesn't fit in our Lenovo Ideapad Y700-17 with the bottom cover installed, so we didn't test it in the system to measure notebook battery life.

We did run the system with the cover "hanging on" to measure system responsiveness with BAPCo's SYSmark 2014 SE software suite. The working cooler on the Cardea II allowed the drive to outperform the Cardea Liquid slightly. This test covers a typical day in the office with a mix of light and heavy moments. The working cooler can help for drives that get into throttled conditions easily.

Team Group started out with a cool idea but stumbled at every step along the way. The Cardea Liquid is like when you leave your house to go somewhere a few miles away and hit every stop light along the way and then breakdown in the store parking lot.

The tin thermal pad Team Group chose for the Cardea Liquid doesn't allow the controller to transfer heat to the liquid. Even if the heat could reach the liquid, we don't see this cooling method as anything more than a gimmick. The liquid, if attached to the controller, would pull heat away from the controller but then it doesn't have any way to remove it. If the liquid was able to boil at less than 80 degrees Celsius, it would have been a neat visual show for but we were never able to boil the fluid in our testing.

Our sample shipped from Taiwan to North America, but the package didn't have any visible damage. Maybe Team Group sent us a damaged drive or maybe the cooler has an issue with cracking that will affect every drive sold.

In a typical consumer system, the M.2 SSD sits between the first and second PCIe slots just under the video card, or further down on the motherboard. If you've ever ruined a system from a leaky liquid cooling setup, you know the frustration involved. Possibly ruining a motherboard, video card, or both would be an expensive mistake. I highly doubt most users would risk putting a Cardea Liquid in a system to tempt fate. This drive will never see the inside of my computer.

The Team Group Cardea Liquid just piles on with one issue after the other. The cooler is doesn't actually make contact with what you want cooled and the plastic case may have issues with cracking.