As long as Thunderbolt technology has been around, AKiTiO has been developing and deploying solutions based on the technology. Behind the scenes, AKiTiO acts as a large OEM for many Thunderbolt vendors, while also maintaining an entire retail lineup of their own. We have had the opportunity over the years to have tested many of their solutions, and our first look at their Thunderbolt 3 lineup comes in the form of the Thunder3 Quad Mini.

The Thunder3 Quad Mini is a four-bay storage appliance that utilizes software RAID within the client OS. AKiTiO states a four-drive striped SSD array is capable of reaching 1375 MB/s within this enclosure while maintaining extra bandwidth for 4K video at the same time. The enclosure is top to bottom aluminum enabling a platform that extracts heat from your drives with ease.

As you have guessed, the Thunder3 is a Thunderbolt 3 device and houses two Type-C ports on the rear of the unit along with a DisplayPort connection. This device is USB-PD capable delivering 15w of power to laptops that are supported. Internally, this device supports four 2.5" HDDs or SSDs - for testing, we used four 120GB BP5e drives from MyDigitalSSD.

The MSRP for the AKiTiO Thunder3 Quad Mini comes in at $329.99 diskless with a two-year warranty. 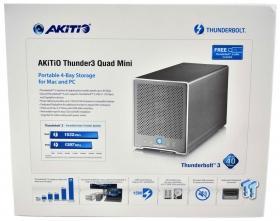 Packaging is always quite busy with AKiTiO solutions with a photo of the enclosure to the right and marketing performance and platform support mentioned to the left. Along the bottom, they list a few of the features of the unit. 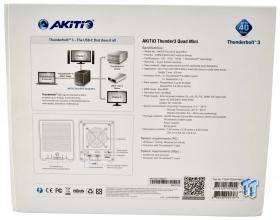 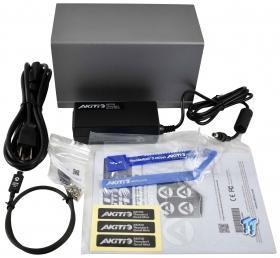 Included in this package, we have a Thunderbolt 3 cable, power adapter, and drive screws. Added accessories include Velcro straps to tie your cables back and stickers with the user guide. 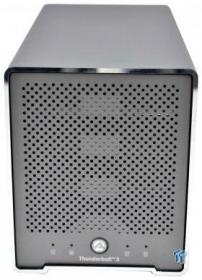 The front of the enclosure has a mesh panel that allows airflow through, pulled by the rear-mounted fan. The center AKiTiO logo is the power button, and flanking left and right, we have LEDs for drive activity. 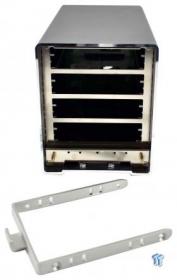 The drive trays are aluminum frames that screw to your drives. 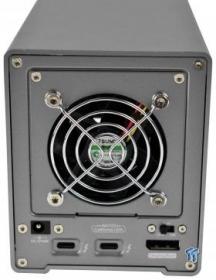 The backside houses the power input to the left. This is followed by two Thunderbolt 3 ports and a DisplayPort connection. Above this, we find the fan switch and the fan itself. 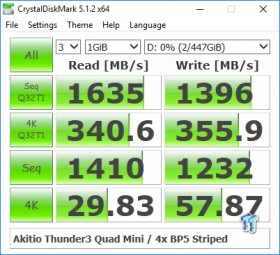 For testing, we used four BP5e SSDs from MyDigitalSSD. With these drives in a striped array, I was able to get 1635 MB/s read and 1396 MB/s write out of the Thunder3. 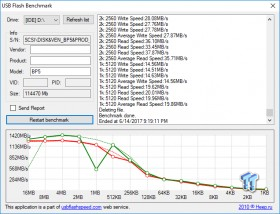 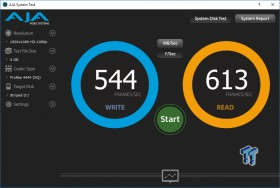 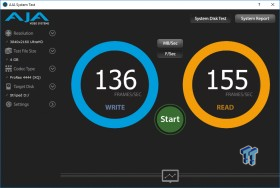 Moving to Ultra HD, the AKiTiO takes a performance hit but still manages to provide 155 FPS read and 136 FPS write.

The AKiTiO Thunder3 is a rather simple device as far as the enclosure goes. It appears to be a single piece aluminum design, something I have seen before on a few occasions. The front panel is a thin mesh allowing a good amount of air through while the back panel takes on the job of I/O connectivity. Build quality is quite good for the Thunder3. The simplistic design aids itself to a particular aesthetic that almost gives it a professional appeal.

The performance was ample, solid, and great at the same time. I was able to exceed marketing performance by a fair bit with our four BP5e SSDs. At the peak, I reached 1635 MB/s in QD32 sequential read with CDM and write performance not far behind at 1396 MB/s. Flash Benchmark numbers were slightly lower, a touch over 1400 MB/s read and 1350 MB/s write, while AJA proved solid 1080p and 4K performance reaching 613 FPS and 155 FPS, respectively.

Software RAID isn't typically what we see with these solutions, so it is interesting to see AKiTiO take this route. OWC does take this route as well using SoftRAID on MacOS platforms but it would be nice to have more hardware RAID options in a four-bay device, rather than leaving it to the OS to configure RAID options.

The Bottom Line: AKiTiO gets off to a fast start with the Thunder3 Quad Mini ushering in high performance in a small form factor design.