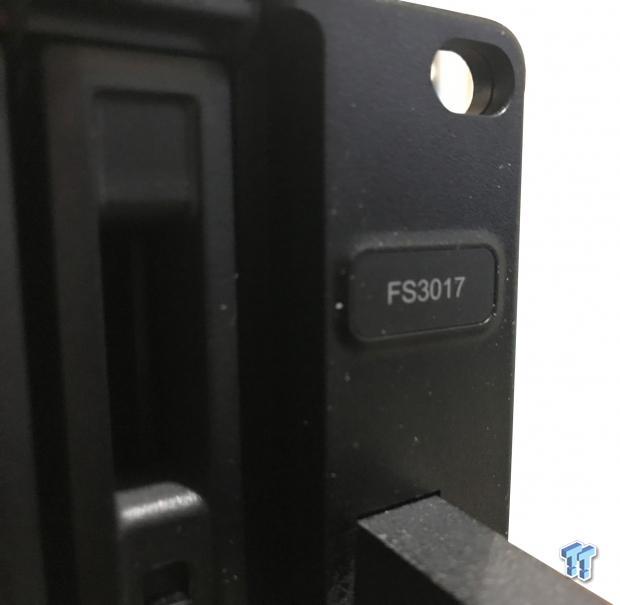 I don't often go outside eight bays when reviewing NAS platforms, but the unit I have today was such a tremendous opportunity, I couldn't pass it up. A lot more went into testing this solution since it is an all-flash platform using 10Gbe - and I do need to thank Phison for the drives used to fill this appliance.

Synology's FlashStation FS3017 is purpose built for enterprises to handle I/O intensive and low latency applications while maintaining flexibility utilizing both the SAS and SATA 2.5" form factor. The FS3017 is capable of 90TB raw capacity and performance is near 200,000 random write IOPS. This solution is also my first experience with Synology's RAID F1, an in-house designed RAID mode that allows for a single drive to take much of the parity data load in an all-flash array, allowing for one drive to fail prematurely rather than a large number of drives at once. 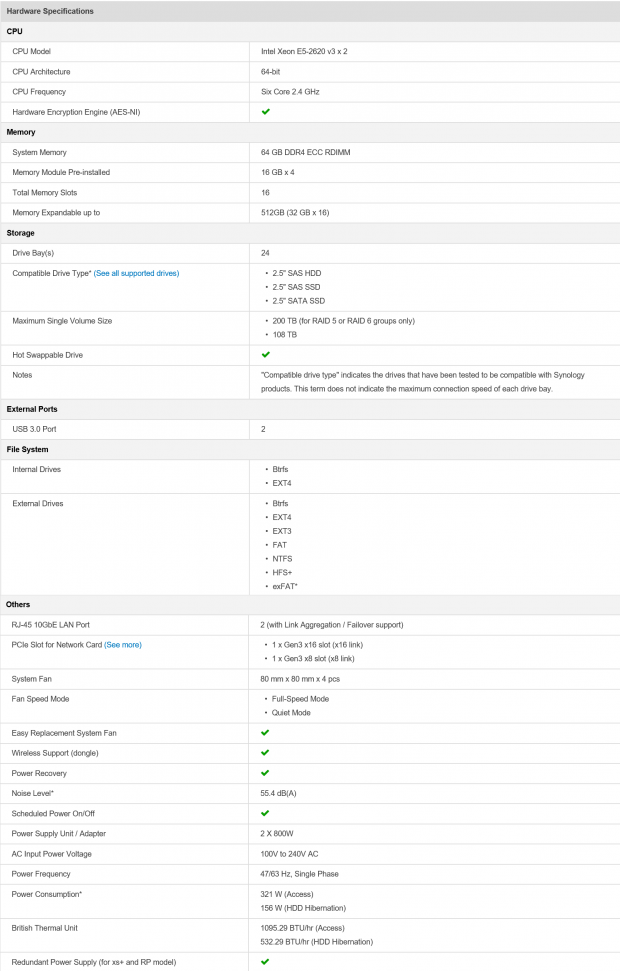 To learn more about the FS3017, we dive into the specifications. Starting things off, we have dual Intel Xeon E5-2620v3 CPUs giving this platform 12 cores and 24 threads at 2.4GHz. This is paired with 64GB of DDR4 ECC RDIMM and can be expanded to 512GB. Moving down the line, we have 24 bays supporting SATA and SAS 2.5" HDDs and SSDs. Maximum volume size sits at 200TB for RAID 5 and 6 and 108TB for the rest.

We also find two USB 3.0 ports on this unit along with two 10Gbe RJ-45 ports. System cooling is provided via the four 80mm hot-swappable fans and power by two 800w supplies for redundancy. 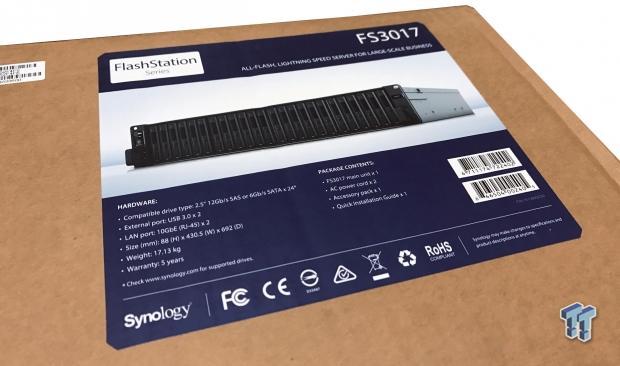 The FS3017 arrived in its retail packaging, a large brown box with a sticker affixed to the top right. This sticker carries a good deal of information about the platform including its 10Gbe capabilities, USB ports, and warranty. 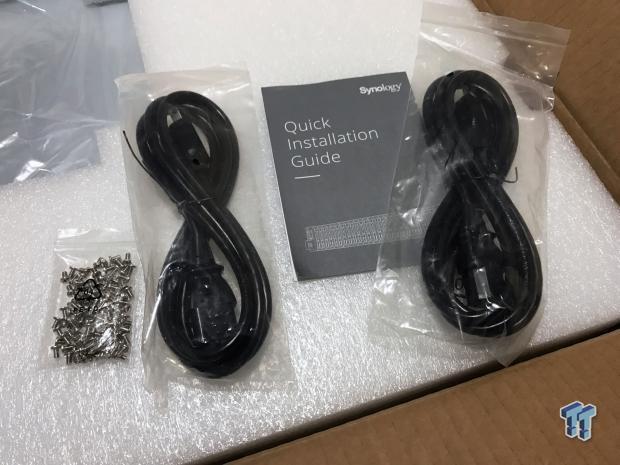 The scope of delivery includes both power cables and a host of drive screws.

The front of the unit houses all 24 bays, and the left side houses the power button and alarm mute. 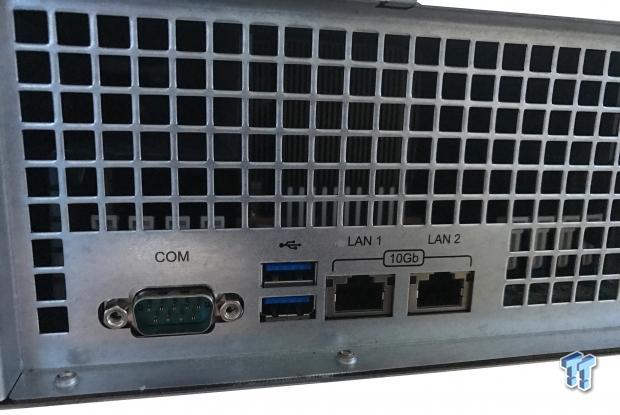 The rear of the unit start with a COM port to the left followed by both USB 3.0 ports and 10Gbe ports.

The far-left side of the platform houses the redundant power supplies stacked. Each unit is capable of 800w. 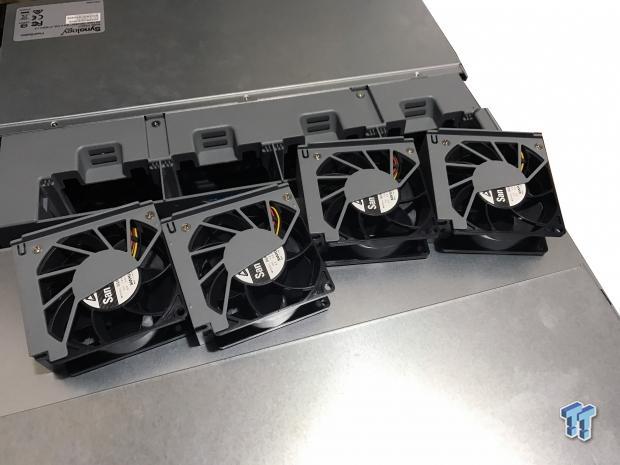 The four 80mm fans are made by Sans Ace and push about 60 CFM a piece. 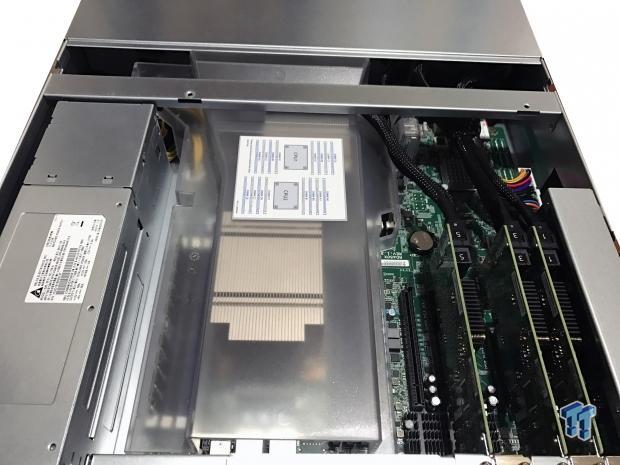 Opening up the FS3017, we have the power supplies to the far left followed by a shroud covering both heat sinks and memory slots. To the far right, we have a line of HBA's connected to the 24-drive backplane. 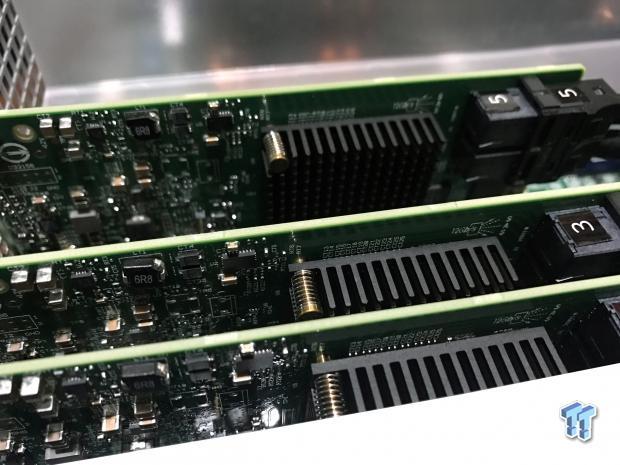 Each of the HBAs is a 12Gb/s SAS capable solution and is numbered. 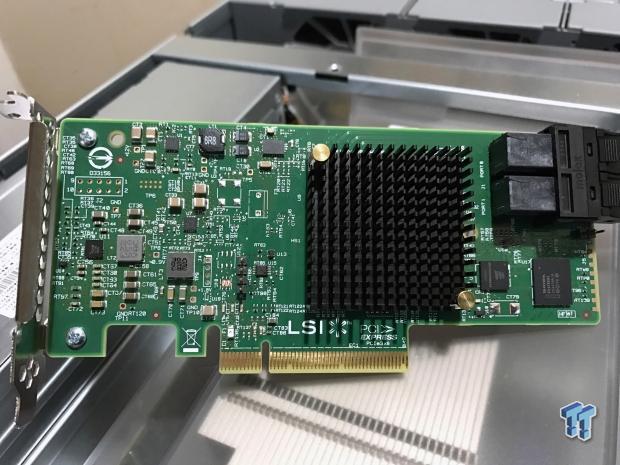 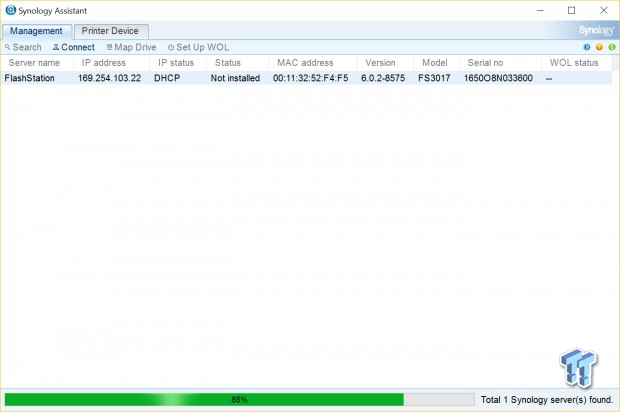 Setup uses the Synology Assistant, as do all Synology appliances. From here, you can get the status of your appliance and begin installing DSM. 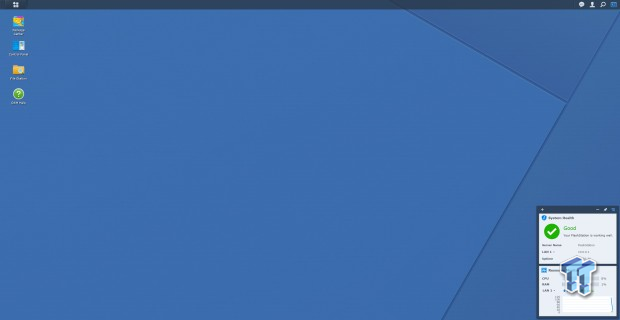 I used a direct 10Gbe connection to test the FS3017; you can probably tell by the IP in the lower right window. Above is the desktop or dashboard for the FS3017, it's nearly identical to every other appliance we have looked at from Synology. The top left houses the package center, control panel, and file station menu items. 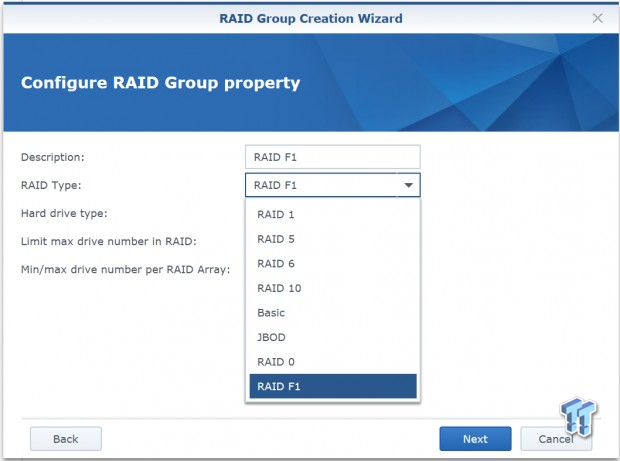 We have gone over DSM several times, and apart from some high availability options, it is pretty standard install for the FS3017.

However, there are quite a few RAID options for the FS3017, as seen in the image above. These include RAID 0, 1, 5, 6, and 10, along with JBOD and RAID F1. RAID F2 is set to appear later this year in Synology appliances. 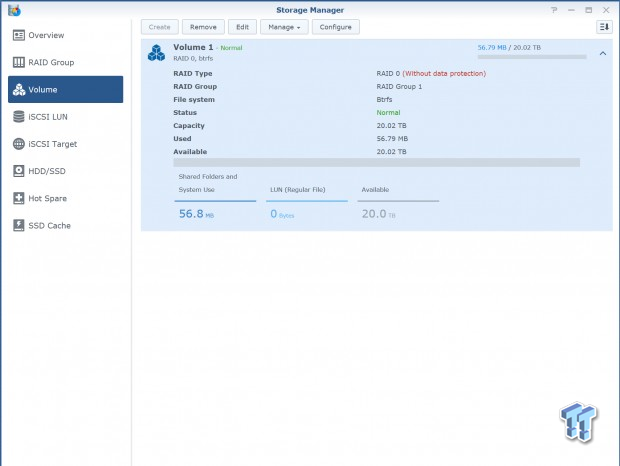 Using 24 1TB SSDs, we have a volume size of 20TB in RAID 0. This is where we start testing and move through all the RAID modes. 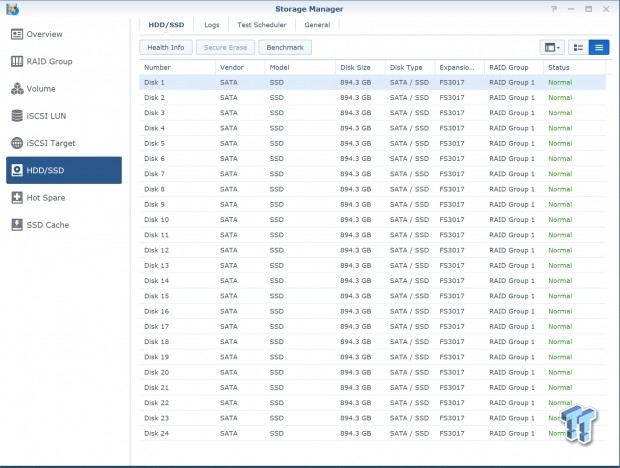 Above is just proof of the 24 Phison SSDs in use for this review. 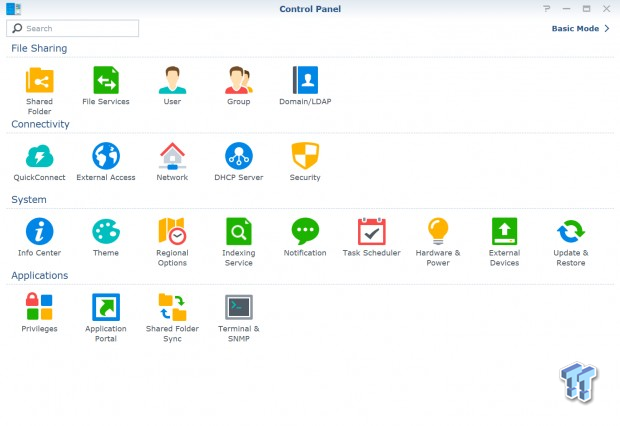 Control panel is where you will find most options. Things like shared folders and users are found here along with network options, update and restore and power.

All testing for the FS3017 was done over iSCSI. This gives a performance boost over using something like SMB or NFS and as such is the best way to get peak performance out of a 24-drive array over a 10Gbe connection. 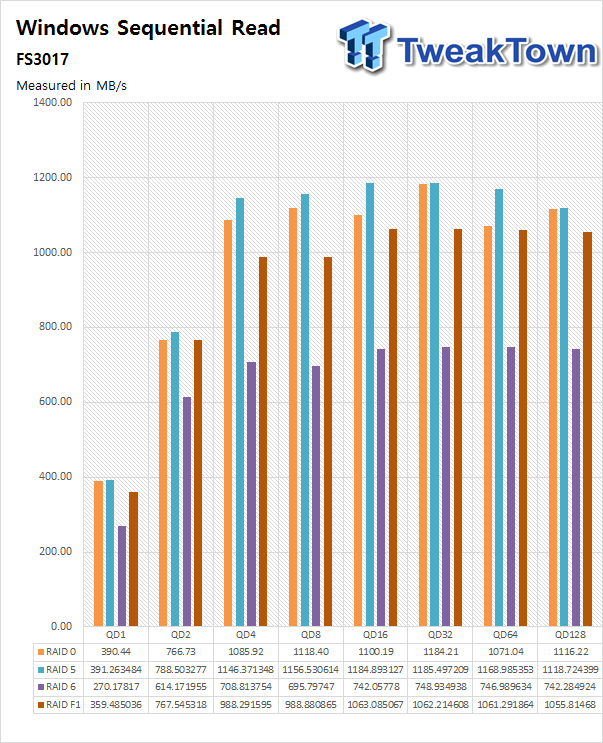 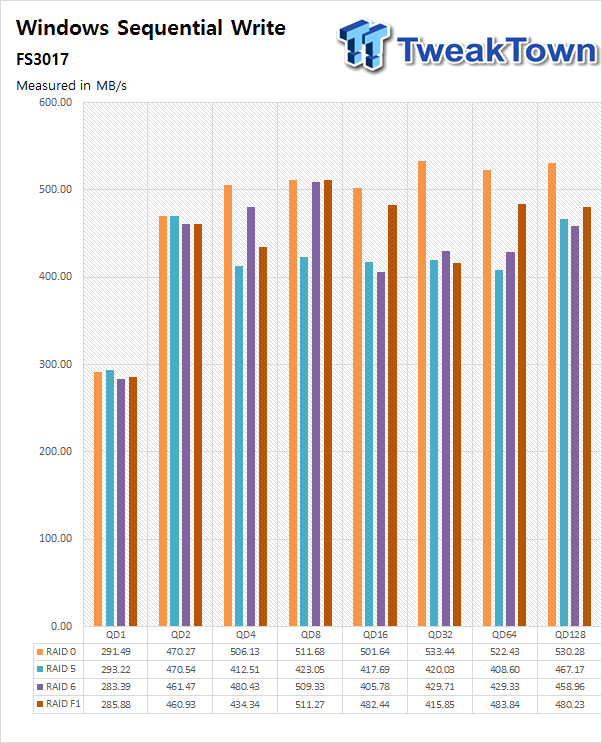 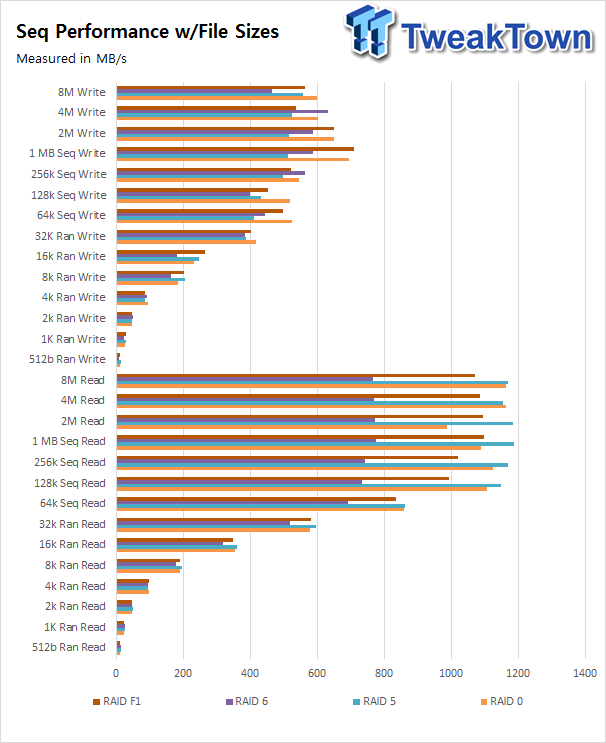 Peak performance can be seen at the bottom of the chart from 128K to 8m read. Peak write performance starts at 1M write through 8m. 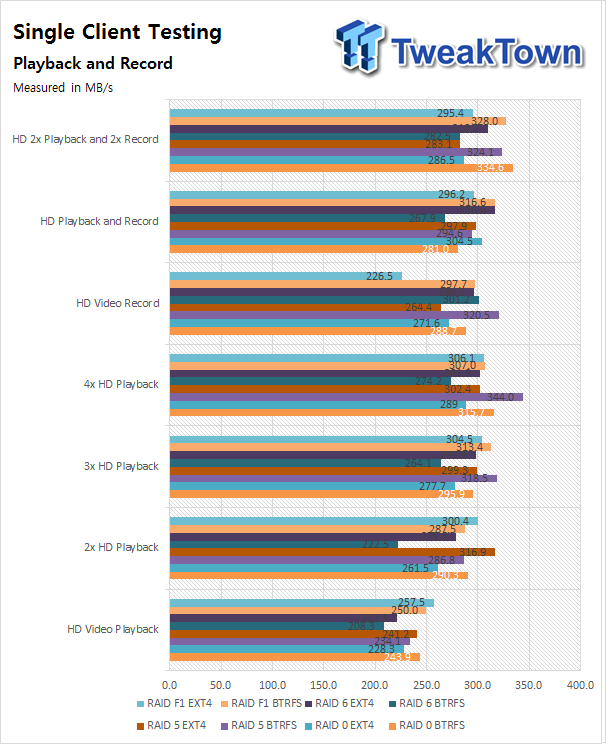 I broke up the data into two charts to make things easier to read with all the RAID modes I tested. Playback and Record tests had similar performance across all RAID modes with RAID 0, 5, and F1 being the best. 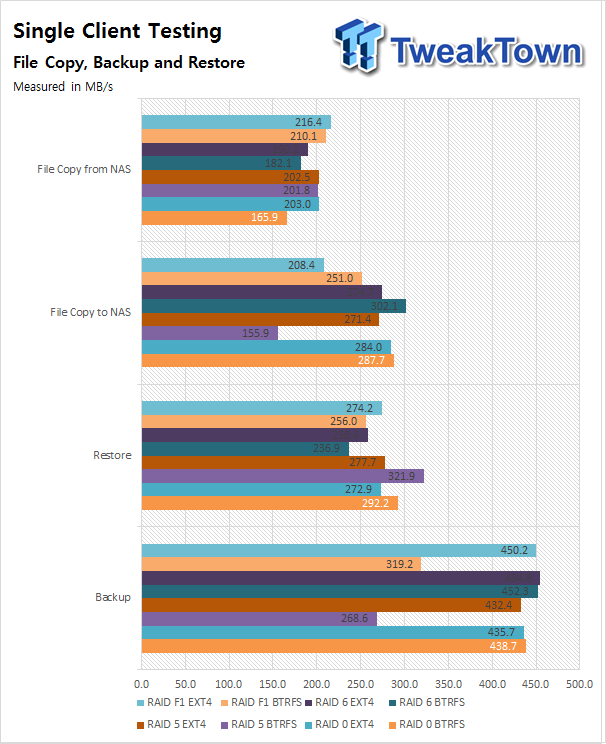 In the file copy and backup test, the FS3017 had its best file copy performance with RAID F1, restore was RAID 5 and backup RAID 6. 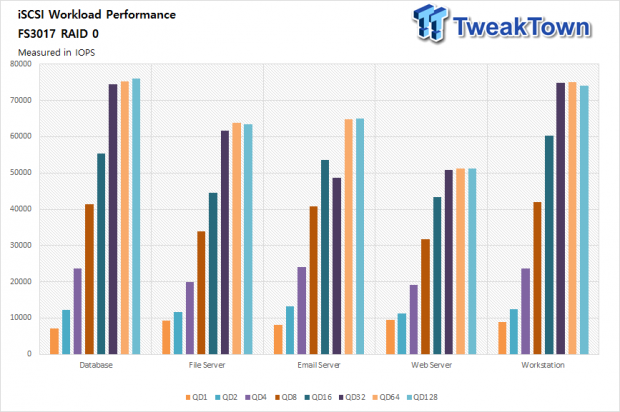 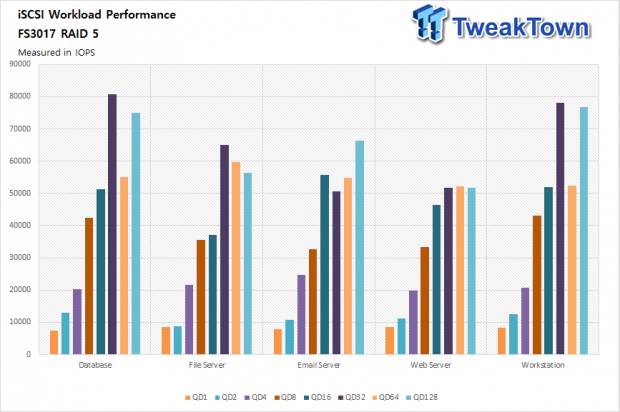 RAID 5 was able to touch 80K IOPS in Database, with Workstation close behind. File and Email server hovered just below 70K IOPS. 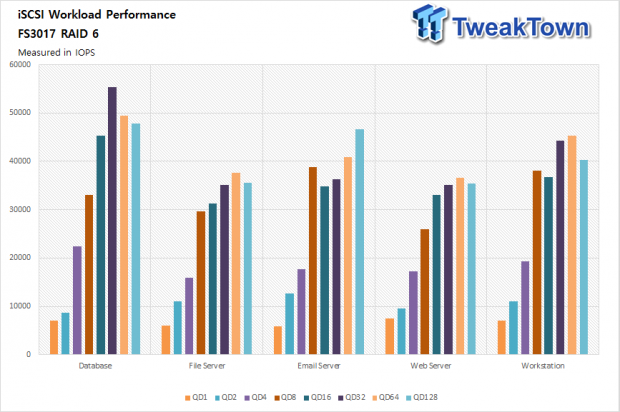 Next up, we have RAID 6 which gave us the lowest performance seen in our testing. 58K IOPS in Database, 47K IOPS in Email Server, and 45K IOPS in Workstation. 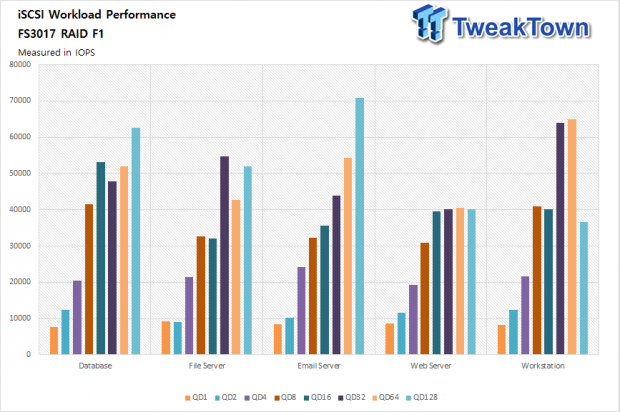 RAID F1 topped out at 62K IOPS in Database, 70K IOPS in Email Server, and 67K IOPS in Workstation for the final test.

In all honestly, it took me about seven days to test this appliance, running tests and erasing and resyncing arrays. This appliance isn't something you will find in a home environment unless you are very serious about your data.

I enjoyed the build quality of the FS3017. This starts with drive trays that are easily removable and taking that further just a few screws will open the chassis so you can access the CPU, memory, and PCIe slots. Having dual 10Gbe built in is pretty amazing for storage performance, but those that want to reach this unit's full potential will want to install a 40G NIC in one of the PCIe slots. Being a 2U appliance, it does carry some noise, but luckily there are options to tone that down quite a bit and adding to airflow, this unit does put out some heat under load.

The performance was easily the highest I have seen come out of a NAS appliance, but this is our first 10Gbe capable and first all-flash solution to come through the lab. Sequential performance easily hit the peak of our single 10Gbe connection at 1118 MB/s in sequential testing and moving through file sizes the FS3017 performed the best from 1M to 8M. Workload testing showed solid performance in Database through all RAID modes, although RAID 0 and 5 both touched near 80K IOPS.

Email Server and Workstation were two additional strong points for the FS3017 with RAID F1 being the peak for Email Server at 70K IOPS and RAID 0 tops for Workstation at 76K IOPS. As mentioned in the introduction, the FS3017 is built for flexibility removing vendor lock-in normally found on large all-flash storage appliances via its support for both SAS and SATA standards in the 2.5" form factor.

DSM has become one of my favorite platforms for NAS systems over the last few years. Having it on a high-level appliance like this FS3017 makes using something so powerful so much easier. You could easily start your NAS journey with something like a DS216 and move up through the DS916 finishing at this FS3017 and not have to learn a bunch of new software.

The Bottom Line: Synology adds to its expansive lineup of network storage devices with one of the most versatile and high performance appliances we have ever seen, the FlashStation FS3017.