No longer is it just death and taxes; we can now add 'Marvel films' to the list of life's certainties, which now arrive with stunningly well-oiled regularity. The latest entry in the Marvel Cinematic Universe comes just weeks after the release of Batman V Superman, which pitted the two biggest characters in the DC Comics stable against one another but ultimately failed to make much long-term impact against some pretty dire reviews.

But it looks like conflict is the order of the day, mirrored in the latest Captain America: Civil War which sees conflict arise in the face of government intervention. So, how does it fare in comparison? Cue the movie. 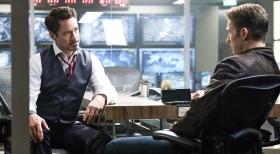 One too many high-profile disasters have put the Avengers on a collision course with authorities, who are attempting to exert jurisdiction over their actions by way of a United Nations sanction. With the Avengers facing the option of submission or denial, Tony Stark (Robert Downey Jr.) suggests the group take the former while Steve Rogers (Chris Evans) resolves to fight. With each side convinced of the wisdom of their course, the disagreement quickly leads to the splintering of the group and a raging internal battle, whose repercussions could have a lasting impact.

While the movie's title promises Captain America, the truth is that Civil War has far more going on than in The Winter Soldier, and is really more akin to The Avengers 2.5 than a standalone entry. Nearly all of the heroes from previous Marvel films come along for the ride (except Thor and Hulk), and it's even audacious enough to drop in cameos from MCU newcomers such as Spider-Man and Black Panther. 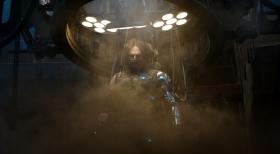 Despite the generous assortment of characters, scene setting for future films and a stretched 147-minute runtime (don't forget to stick around for those trademark end credit stingers), it's a welcome surprise that Civil War manages to keep things humming along rather smoothly.

Perhaps part of the film's success comes down to what is actually quite an economical and simple storyline compared to Winter Soldier's heavy-handedness. Unlike Zack Snyder's murderverse in Batman v Superman which drenches every scene in dark and depressing forebodingness, Marvel's version of hero battle is kept significantly lighter in tone. Subsequently, it's perhaps not as 'epic', but it's infinitely more fun.

At this point, the leading actors could probably play their roles in their sleep, and while I'm not suggesting that they're sleepwalking throughout the movie, it does have quite a familiar feel throughout. Robert Downey Jr., in particular, feels a lot more restrained, perhaps he's getting tired of the role, or maybe it's his reading of the role after having seen so much action in previous outings, but regardless, there's definitely a lot less energy on display. Ultimately, this is Chris Evans' movie throughout and while his Captain America is a bit more one-note than the intricate backstory provided to others, he takes on the role with gusto and with an athleticism that suggests he's got plenty of life in the character yet. Special mention should also go out to Tom Holland's extended Spider-Man (albeit one that feels a bit sandwiched in) and whose casting comes as a welcome departure for the character.

Having previously cut their teeth on the well-received Captain America: The Winter Soldier the Russo brothers will follow-up Civil War with the next two Avengers sequels, in a sign the duo have some serious clout at Marvel Studios. While there's precious few hints in their earlier work such as You, Me and Dupree and TV's Arrested Development to suggest they'd be a good fit for the studio, I think they've more than demonstrated their capacity thus far. I'm looking forward to what they have up their sleeves next. 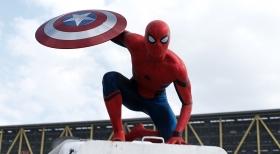 The very definition of a summer blockbuster, Civil War is simply one of those films that they still make multiplexes for - a film which thoroughly engages for its two-and-a-half-hour runtime, but won't make your brain break a sweat. 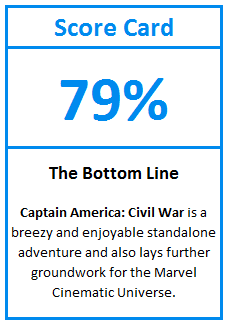