From the first Iron Man feature in 2008, their acquisition by Disney the following year and a record breaking $1.5 billion box office haul from 2012's The Avengers, Marvel Studios has continued to grow from strength to strength, with hit after hit, allowing not only a license to print cash in their own right, but also exponentially increasing the value of all their associated properties. In Captain America: The Winter Soldier, Chris Evans returns as the all-American hero, but does the sequel play it safe or attempt to shake up the formula? Read on, dear reader... 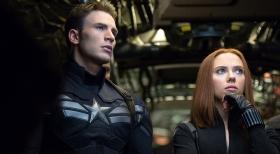 Two years on from the events of The Avengers, Steve Rogers (Chris Evans) continues to struggle with his forced adaptation to modern society and remains deeply suspicious of SHIELD and its head, Nick Fury (Samuel L. Jackson). Following the hijacking of a SHIELD ship, an attack spearheaded by an operative whose existence most refuse to acknowledge; the Winter Soldier (Sebastian Stan), Rogers and his off-sider Natasha Romanov (Scarlett Johansson) unveil a plot that goes to the very heart of SHIELD.

Not only does it implicate many members of SHIELD that we've come to know, but also involves a figure from Rogers' past - the ramifications of which will ripple through the Avengers initiative and bring the organisation and its leadership to its knees. 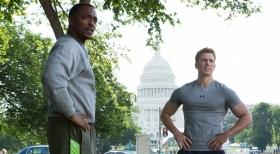 Coming from Writer-Director partners the Russo Brothers, previously best known for TV comedies such as Community and Arrested Development, The Winter Soldier represents a confident, yet inherently risky move for Marvel, but in my view, one that has paid off reasonably well.

I don't want to dwell too much on the film's surprises (some of them admittedly poorly kept), but I can't stress enough how the events of this film will significantly alter the intricate world that the studio has spent eight films developing. With this in mind, it's disappointing, but probably unsurprising that after all the espionage, conspiracy and political intrigue that precedes it, the last quarter reverts back to form as a typical blow-em-up actioner, indistinguishable from any other. It's a shame too, because the slow burning set-up was wonderfully executed. 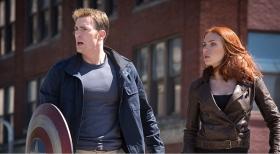 Still, there is a lot to enjoy, and partnering up Romanov and Rogers seems to have been a wise move by writers Christopher Markus and Stephen McFeely. The ever likeable Evans and fanboy-favourite Johansson play off each other well, with a hint of chemistry for good measure. Far from mere fan-service, the cameos, casual name-drops and wider Marvel nuggets that litter the film truly build on and enhance the cohesiveness and logic of the universe that the company continues to build with each entry.

Whilst the introduction of minor characters such as the Falcon, portrayed by Anthony Mackie seems to be stretching the film a little too far, many more significant threads left hanging from the first Captain America are addressed in The Winter Soldier, which in many ways acts a solid pay off for both the first film and as a continuation of The Avengers, to be explored further in next year's The Rise of Ultron.

Where that goes with The Winter Soldier's game changer is anyone's guess, but as always, stay for the post credits coda for a sneak peek. I'll be there, no doubt. 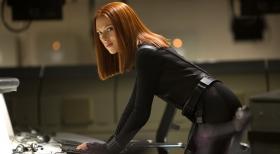 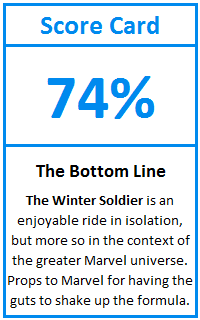