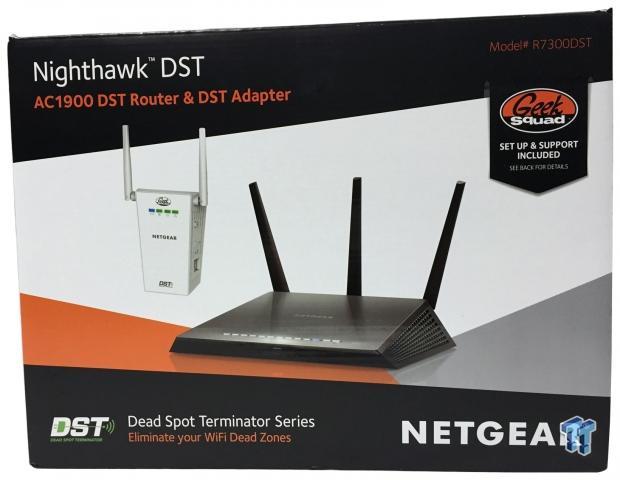 Over the last few years, AC1900 has been the most popular as it provides a path forward with this technology integrated into many motherboards, smartphones, and notebooks. With this, Netgear went to work creating a new series of wireless platforms called the Dead Spot Terminator Series or DST. The first of these solutions is the Nighthawk R7300, which is based on the R7000 with added features. The power supply has been moved internal and, in turn, powerline technology has been added that is compatible with HomePlugAV. 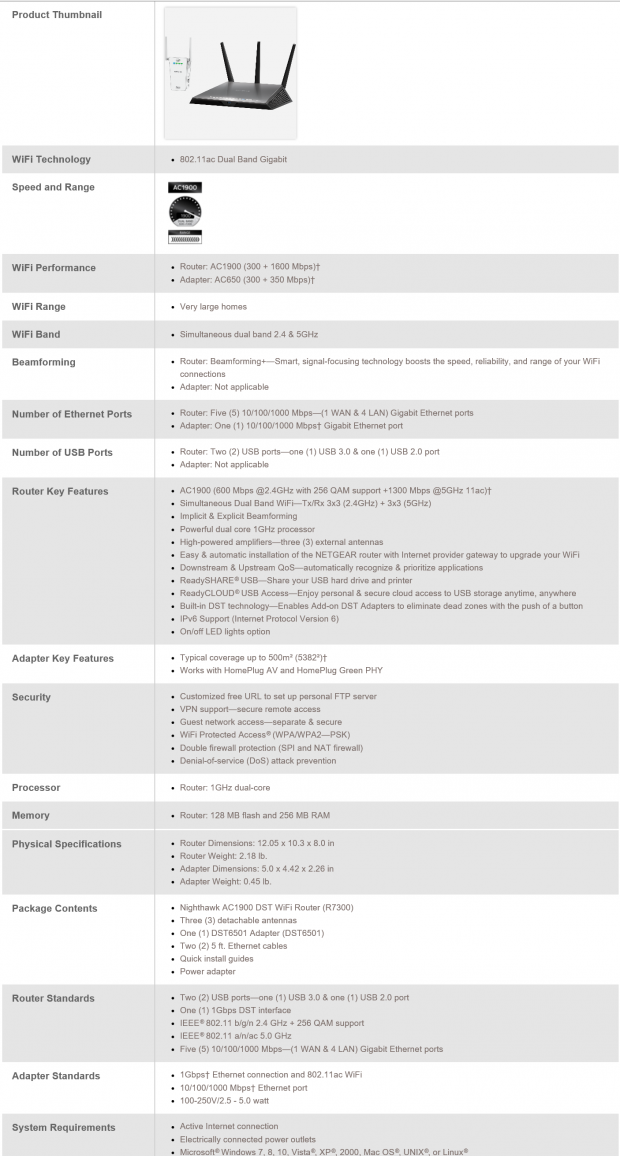 Specifications of the Nighthawk DST start with a dual-band gigabit platform featuring 600Mbps on the 2.4GHz band and 1300Mbps on the 5GHz band. At the heart of this router, we have a 1GHz dual-core processor sitting next to 256MB of DRAM and 128MB of flash.

Connectivity of this solution includes two USB port with one supporting the USB 3.0 standard along with five Gigabit Ethernet ports - four for LAN and one for WAN. With this unit being part of the DST family, included you will find the DST adapter. This adapter supports the AC650 standard putting out 300Mbps on 2.4GHz and 350 on the 5GHz along with added functionality of being powerline networking infused and compatible with HomePlugAV standard.

The product packaging carries the standard vibrant Netgear coloring scheme with an image of the router centered. To the right, Netgear has outlined the inclusion of Geek Squad support as this solution is a Best Buy exclusive. 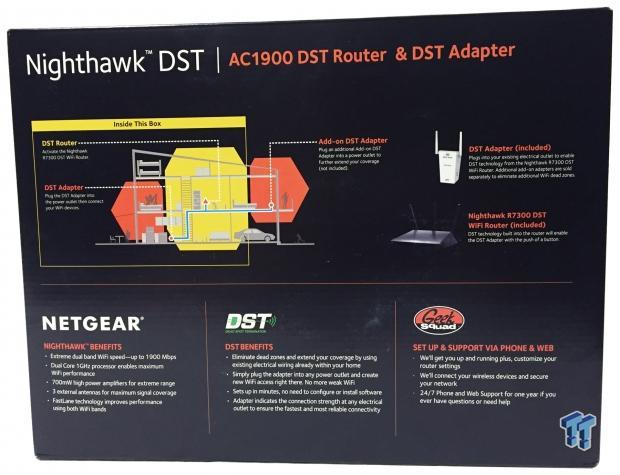 On the back of the box, we have marketing information towards the bottom with a diagram of this unit's functionality at the top. 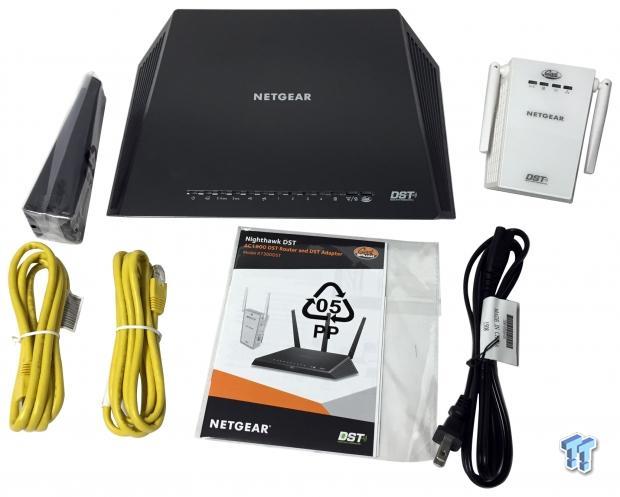 The scope of delivery includes the router with its three antennas to the left along with two Ethernet cables, the power cord and DST adapter to the right. 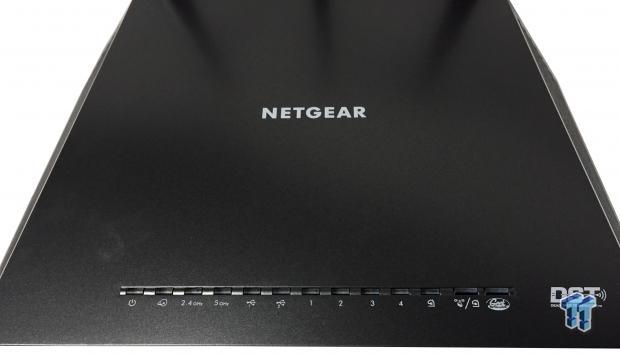 Taking a look at the R7300 you will notice it is basically the same platform as the R7000. What we have that differs is the addition of DST LEDs to the far right. 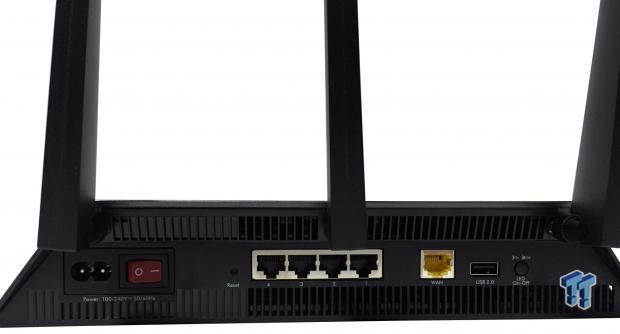 The back of the router houses the three antenna ports, four LAN, and a single WAN port along with the power input that doubles as the powerline connection out. 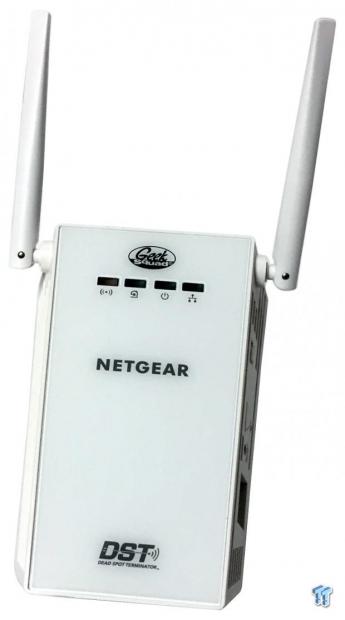 Here we have the DST adapter and as you can see it closely resembles your typical powerline adapter. At the top, we have the geek squad logo along with four LEDs for connectivity. 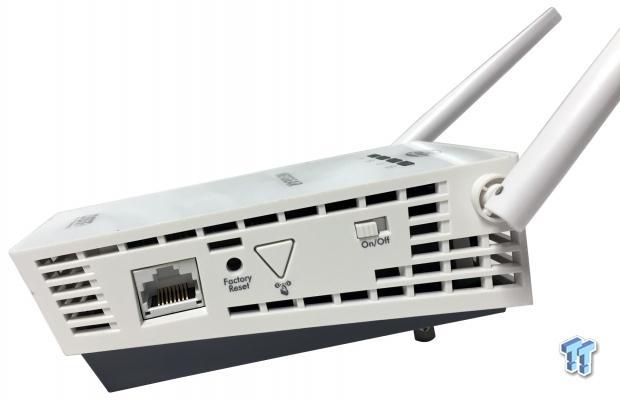 On the side of the adapter we have a single gigabit Ethernet port, reset button and sync button. 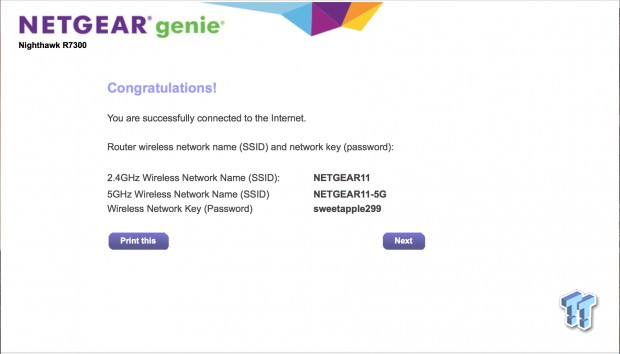 Setup of the R7300 is pretty straight forward. Once the router is setup on your network, the Genie launches as proceeds to automatically set itself up with little input.

Basic setup landing shows you a quick view of what's going on in your network. As you can see, the wireless password scrolls across the top while we have parental control readily available as well.

The Basic Wireless menu allows you to change the SSID of your networks along with passwords and connection speeds. 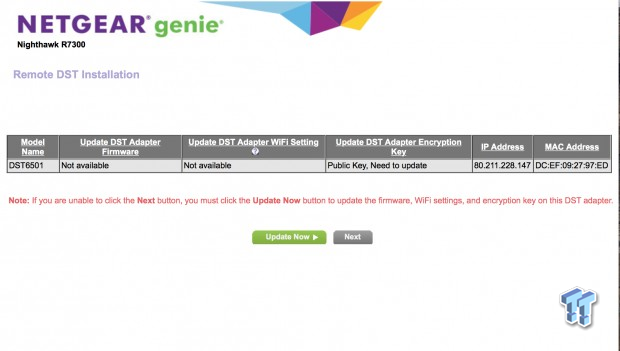 Above, we have the DST menu that shows you the status of any adapters on your network.

Like all Netgear solutions, this too has Dynamic QoS with a built-in database for applications. 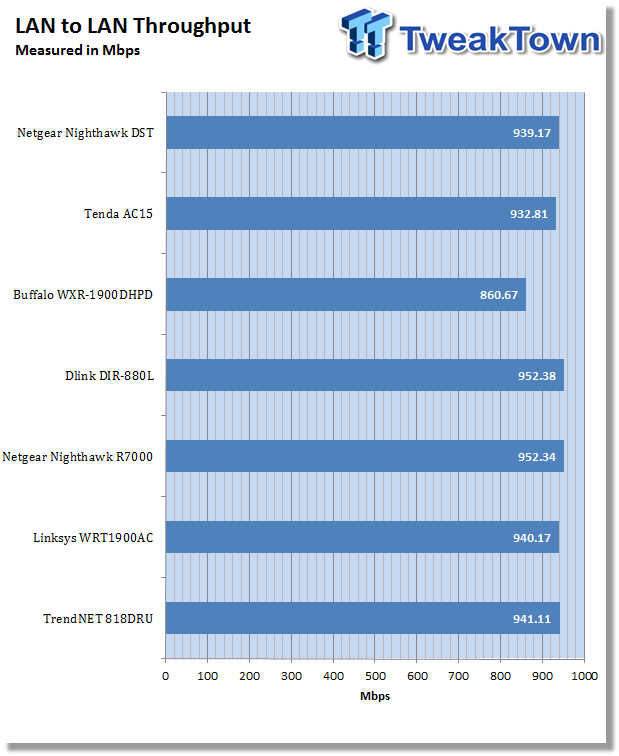 Starting off with LAN to LAN throughput, the R7300 produced 939 Mbps, which is slightly under what the R7000 produced years ago. 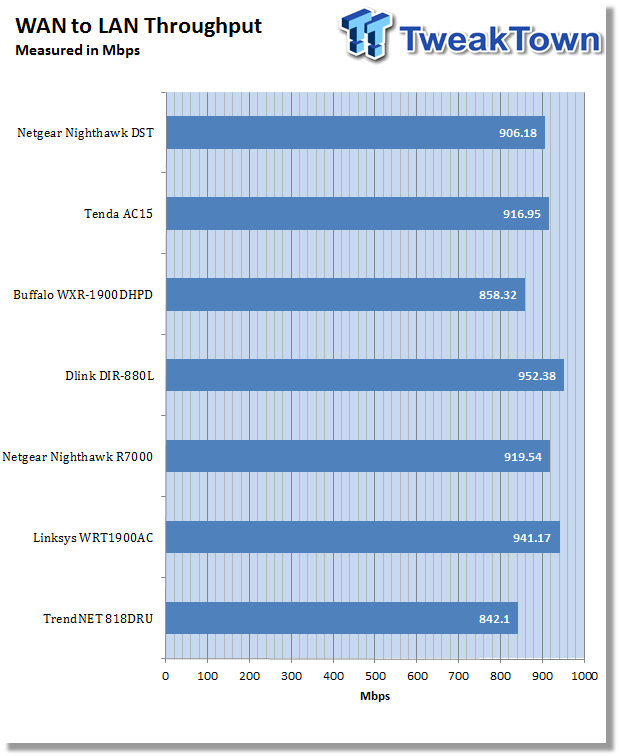 WAN to LAN for the DST came in at 906 Mbps putting it near the top when it comes to AC1900 solutions. 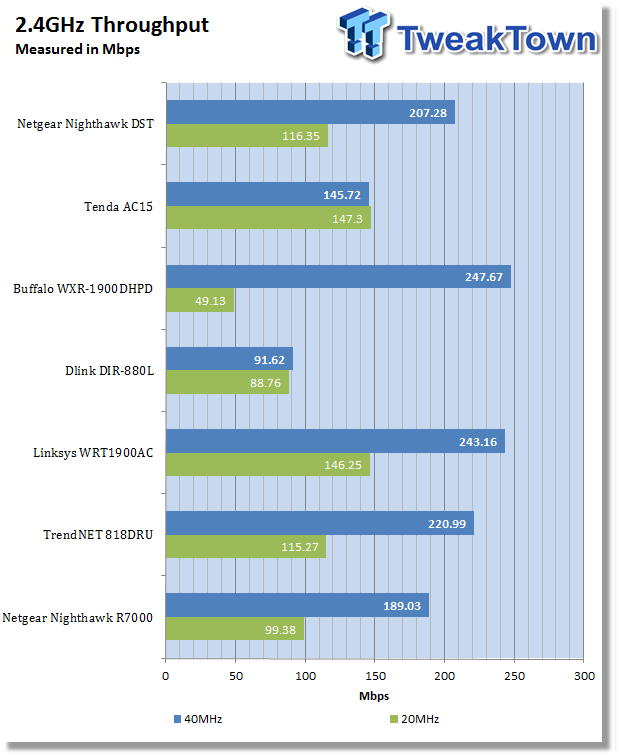 Switching to wireless throughput, the DST produced 116 Mbps on the 20MHz band and 207 Mbps on the 40MHz band. Each of these results exceeded the performance of the original Nighthawk. 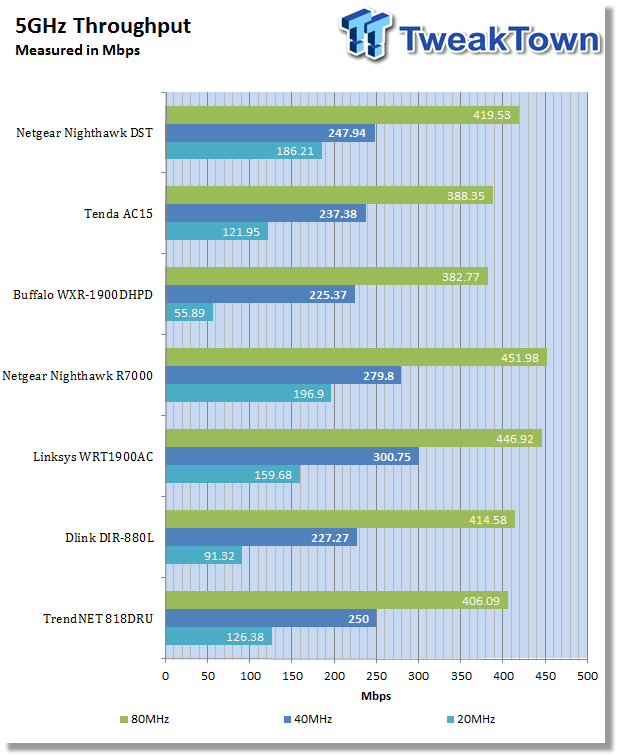 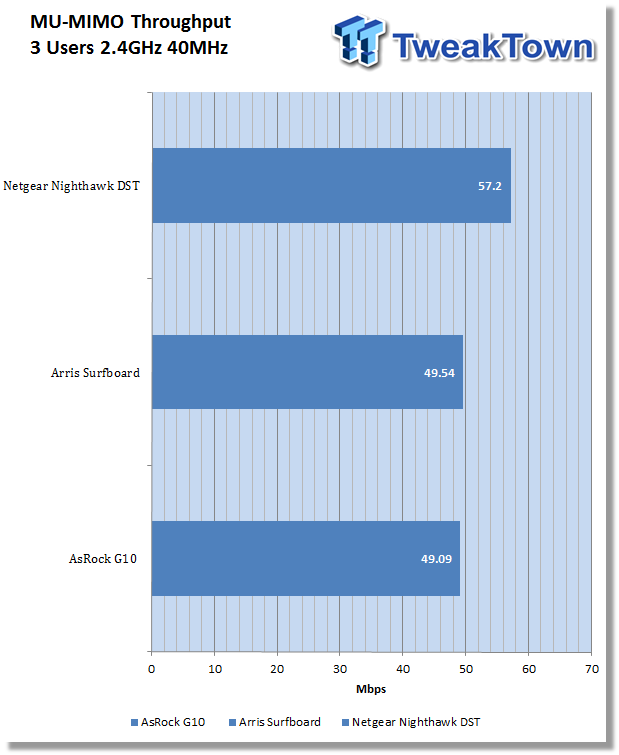 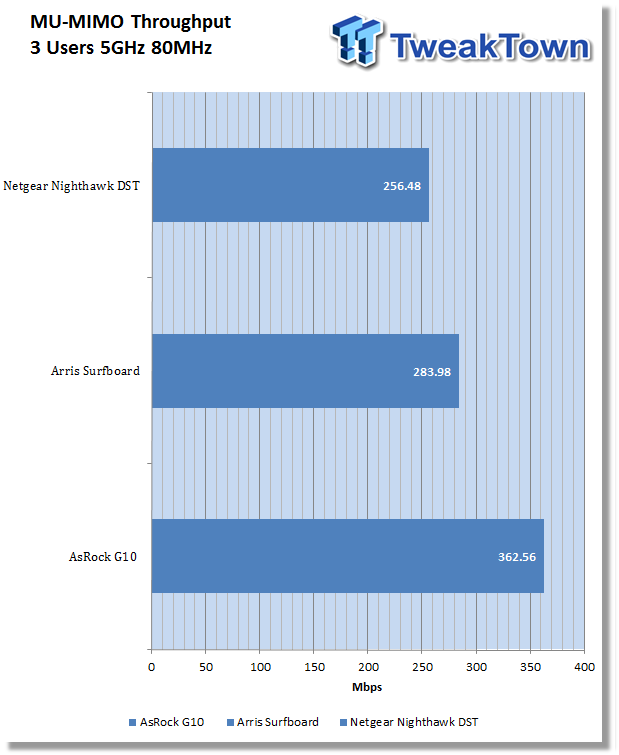 As you can see our initial testing includes just three solutions but above all the Nighthawk DST comes in as our quickest at 57 Mbps in our 2.4GHz testing. On 5GHz, the ASRock G10 took top honors, but the DST wasn't far behind at 256 Mbps. 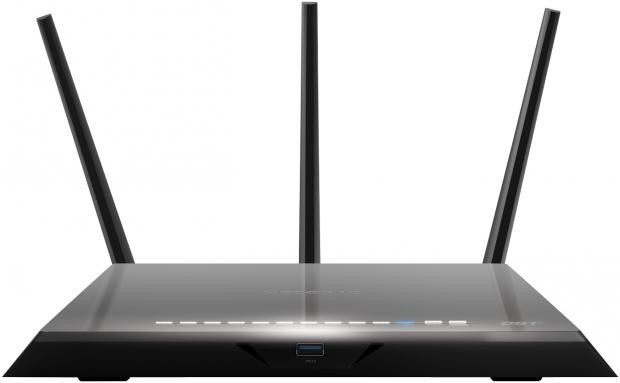 After seeing so many routers come through the lab, it's always refreshing to get one that thinks outside the box. With the Nighthawk DST, we have a hybrid solution that along with being a solid AC1900 solution uses the built-in power supply along with an adapter to extend the wireless network further than it could ever go. With that said, this solution is catered to users with very large homes, so it could be a little too much for some. On the plus side, the R7300 is built like a tank, and since it's built on the original Nighthawk platform, it does have a good amount of weight and a large footprint.

The performance of the Nighthawk DST was quite good and as expected the wired LAN speeds ran at full capacity while WAN performance was right behind it at 909 Mbps. Wireless performance was pretty good and on par with most AC1900 solutions I have seen. With 2.4GHz the DST was the fourth quickest router while on 5GHz this solution landed as the third quickest router using the 80MHz band.

Like many solutions from Netgear, this router too uses the Genie platform, which in my eyes has the best implementation of QoS to date with its continuously updated database of streaming and protocols. Added value with this solution comes with the DST adapter as it allows an integrated extension of your network, and for those that often need assistance setting up networks, Geek Squad backs this solution with free support for one year.

The MSRP of the Netgear Nighthawk DST R7300 sits at $249.99 with a one-year warranty, which makes it one of the more expensive AC1900 solutions on the market.

The Bottom Line: The Nighthawk DST is a great router for those needing 802.11ac and powerline capabilities in one solution, but limiting the release to Best Buy only hurts the consumer with the high pricing.