Promise Technology's R2+ is a solid well built solution that packs in so many features including hardware RAID and swappable pods that it is definitely worth your consideration if your in the market for a top tier Thunderbolt solution. 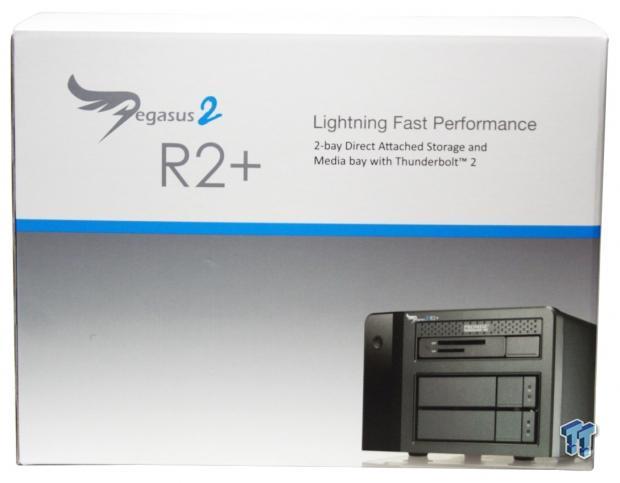 It has been awhile since we have had a Thunderbolt storage solution make its way through the lab. Luckily enough we have a few products in the house now and today we are starting up the MacBook to begin testing with the Promise Pegasus2 R2+.

The R2+ is the latest two-bay hardware RAID solution from Promise Technology. It carries a unique design that has the standard two bays for your 3.5" hard drives. It also utilizes a pod system for a third media bay that allows media professionals the ability to access media from sources such as SD and Compact Flash while swapping out to a 2.5" Pod allows access to your choice of SSD.

Each pod while using a SATA connection for the R2+ also houses a micro USB 3.0 connection so they can be turned into standalone solutions. Like the pods, the Pegasus unit itself is a dual connectivity solution, and while we will be focusing on Thunderbolt 2 in our testing, it is important to point out it does offer USB 3.0. 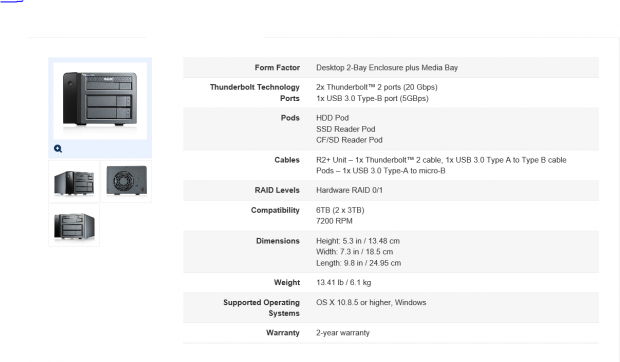 The specifications for the R2+ mention its two-bay plus one form factor while offering both Thunderbolt 2 and USB 3.0 connectivity. Pods all carry a 2.5" form factor and include options for SD and Compact Flash, SSD and HDD. RAID levels for the R2+ include 0 and 1 with two 3TB 7200RPM Hard Drives. Operating system compatibility extends to OS X 10.8.5 and higher along with Windows 7+.

Packaging for the R2+ is rather sleek with an image of the DAS below and minimal marketing information above.

Cables included with the R2+ include a Thunderbolt cable, USB 3.0 cable and power cable. To the far left, we also have a second USB 3.0 cable for the included pod. 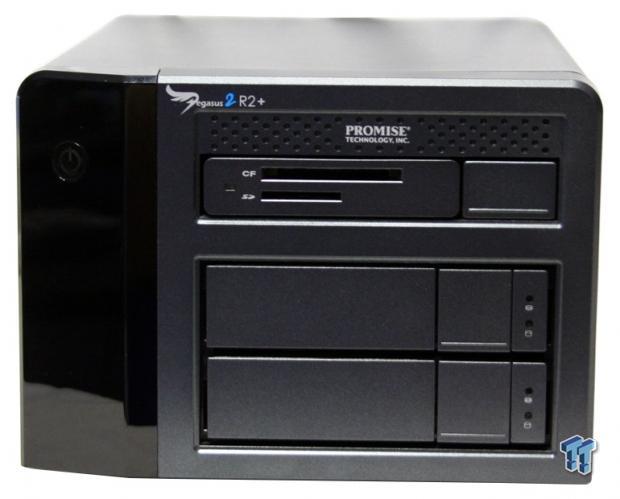 Taking a look at the Pegasus2, we have the power button on the left in the glossy area of the enclosure with the SD pod housed in the media bay. Each of the three bays is easily ejectable with their respective buttons to the right of the bay. 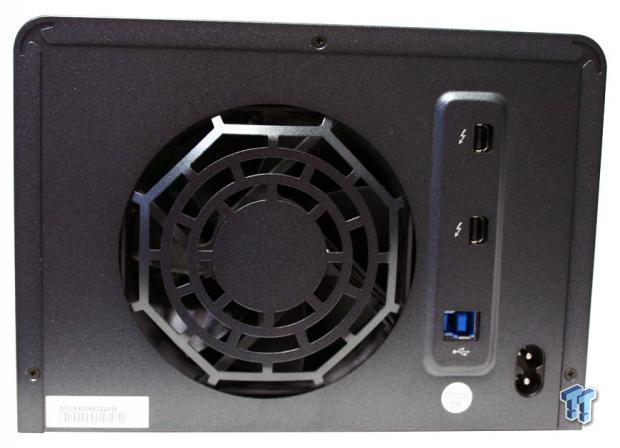 The rear of the enclosure is rather simple with a large cooling fan with the dual Thunderbolt and USB 3.0 ports to the right. At the bottom, we have the power input for the built-in power supply. 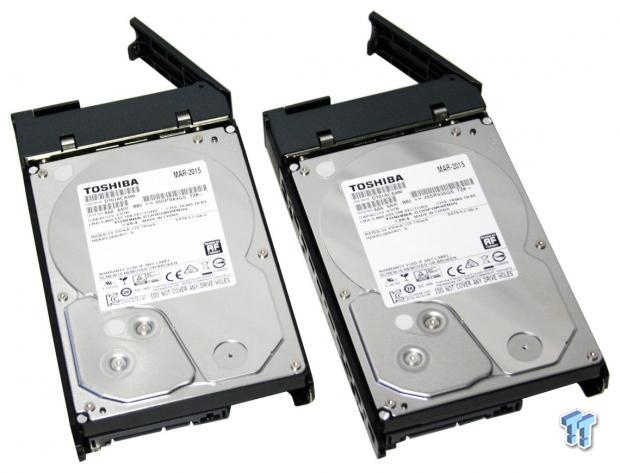 The drives being put to work in the Promise Pegasus2 R2+ are Toshiba 3TB 7200RPM solutions.

Above we take a closer look at the SD and Compact Flash pod.

As mentioned in the introduction, these pods include both a SATA interface and USB 3.0 connection for use in the Pegasus and standalone. 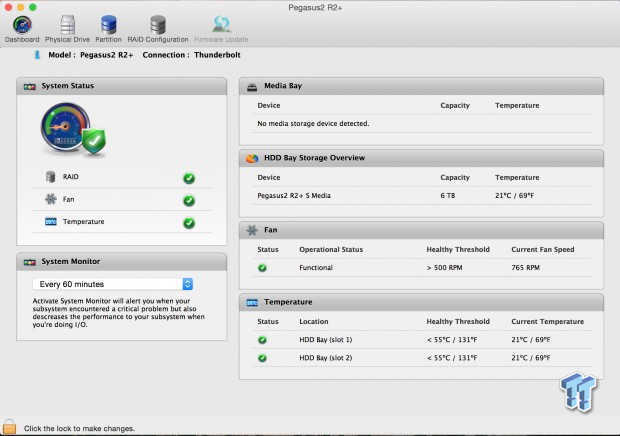 While many OS X RAID solutions rely on Apples Software RAID built into Disk Utility, the Pegasus R2+ has its own software. This software as you can see above monitors everything from RAID status to drives temperatures and even the fan speed. 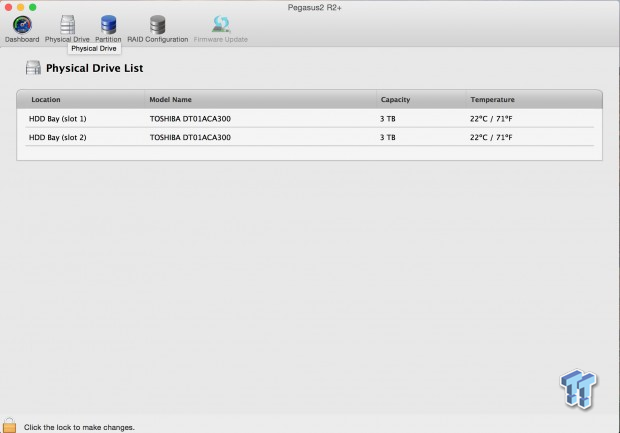 Moving over to the drive list, we can see both of the Toshiba drives installed in this unit are 3TB drives with rather low temperatures thanks to the large cooling fan. 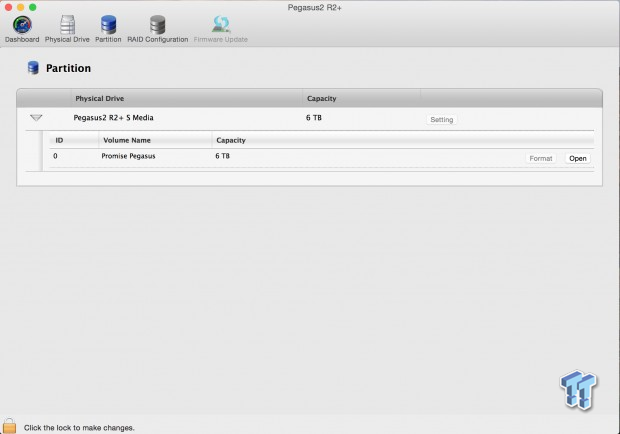 Next we have partition setup while the tab next to it allows quick setup of your RAID array. 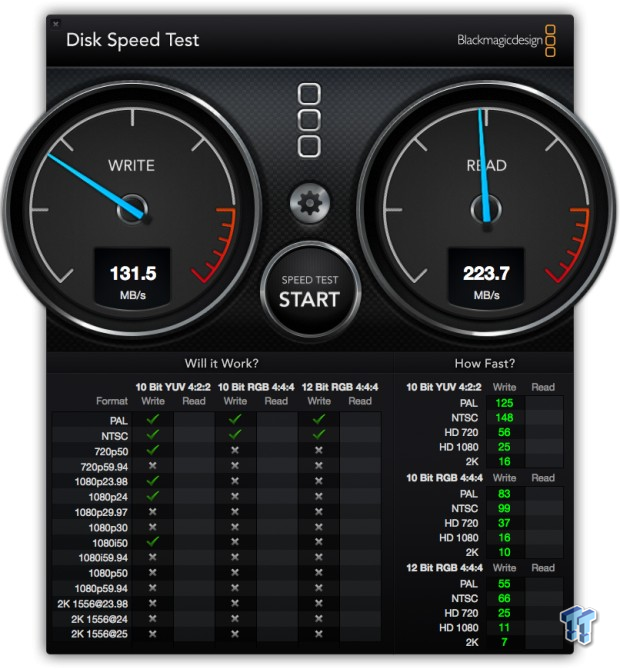 To begin our testing of the Pegasus2 R2+, we gave the SD pod a run through with our UHS-II SanDisk Extreme Pro. Quite surprisingly, we quickly figured out the pod was capable of UHS-II performance as our card reached 223 MB/s read and 131 MB/s write. 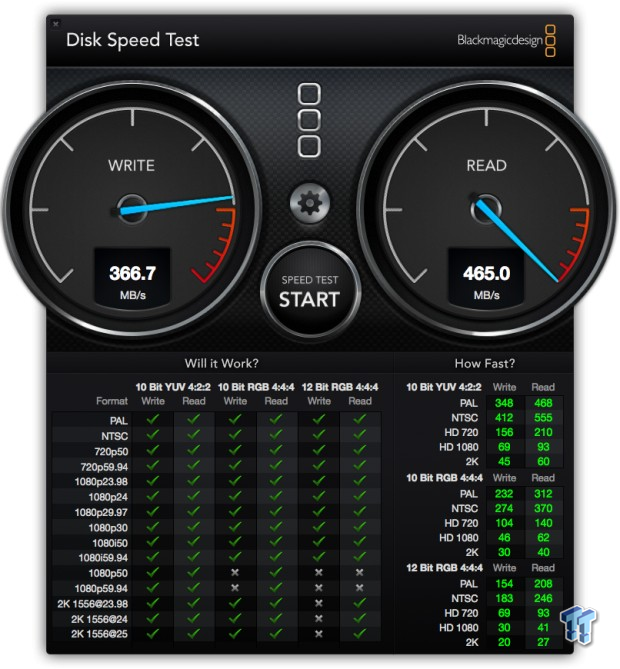 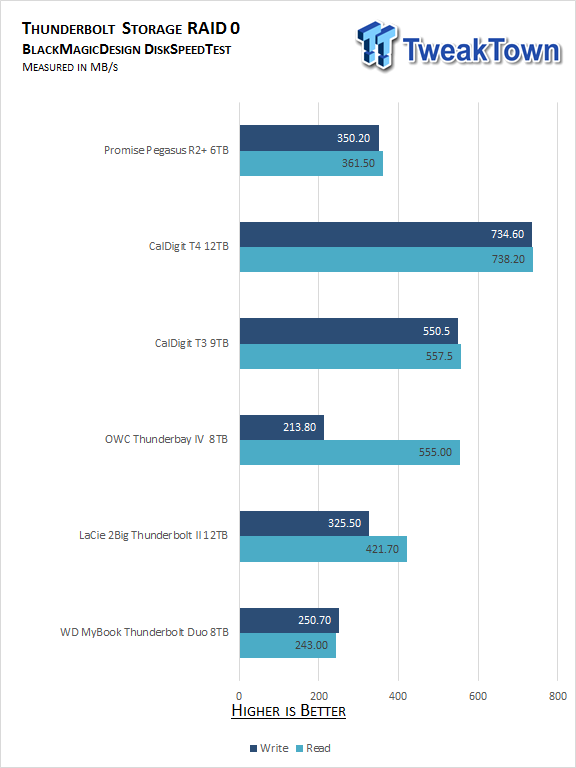 Moving over to our array, we start off with RAID 0, where we find the R2+ pushing 361 MB/s read and 350 MB/s write - quicker than the original Thunderbolt MyBook from WD and right with the 2Big from LaCie. 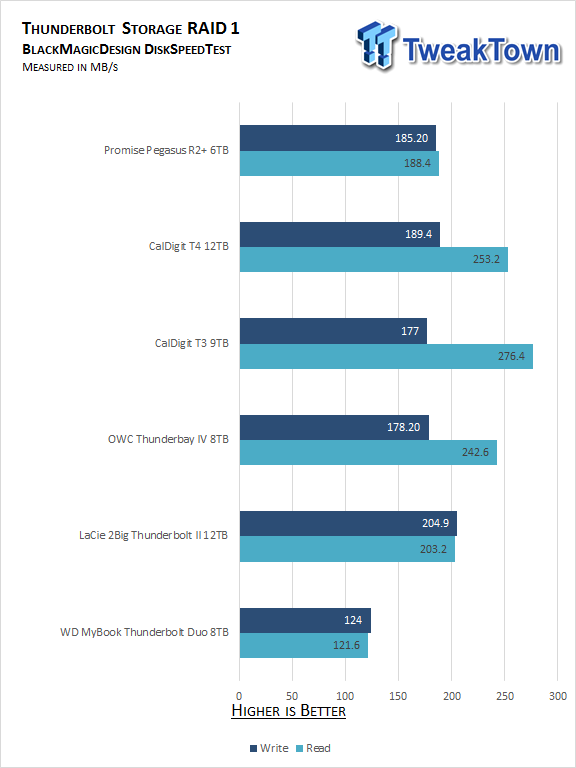 Moving over to RAID 1, we start off with read results coming in at 188 MB/s followed by write at 185 MB/s. Our RAID 0 testing put the R2+ ahead of the WD by a fair margin while the LaCie was a touch quicker. 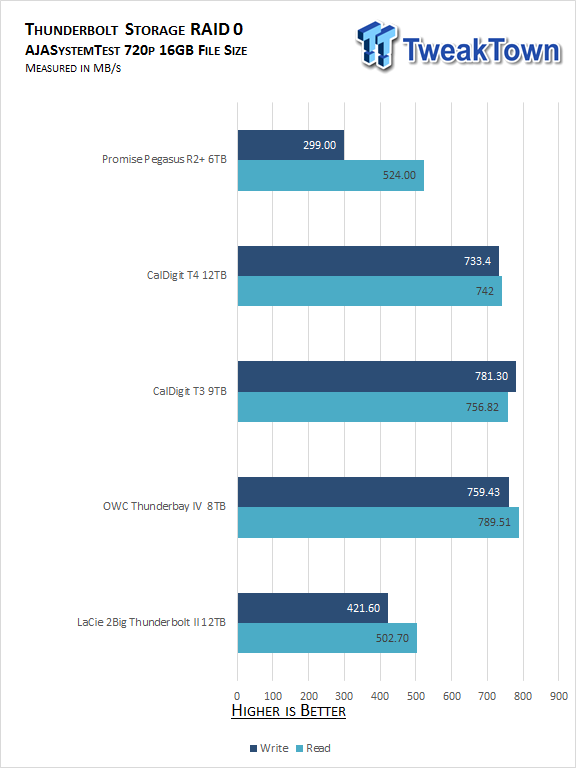 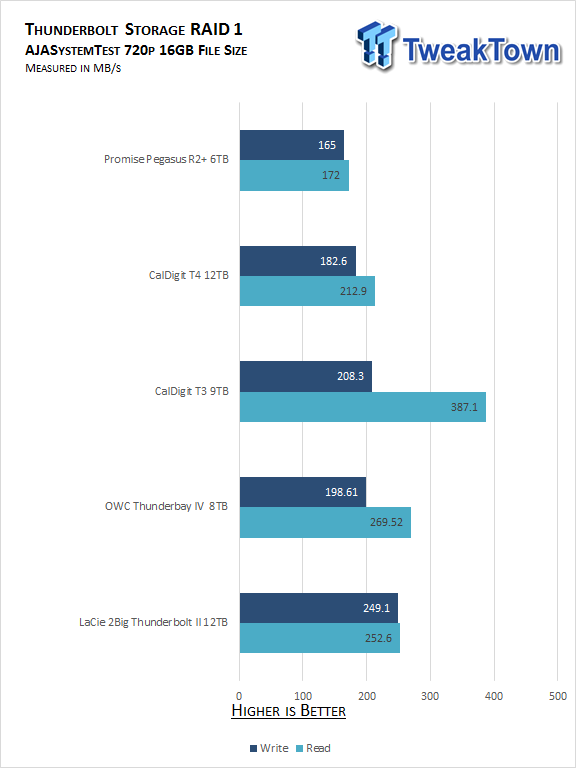 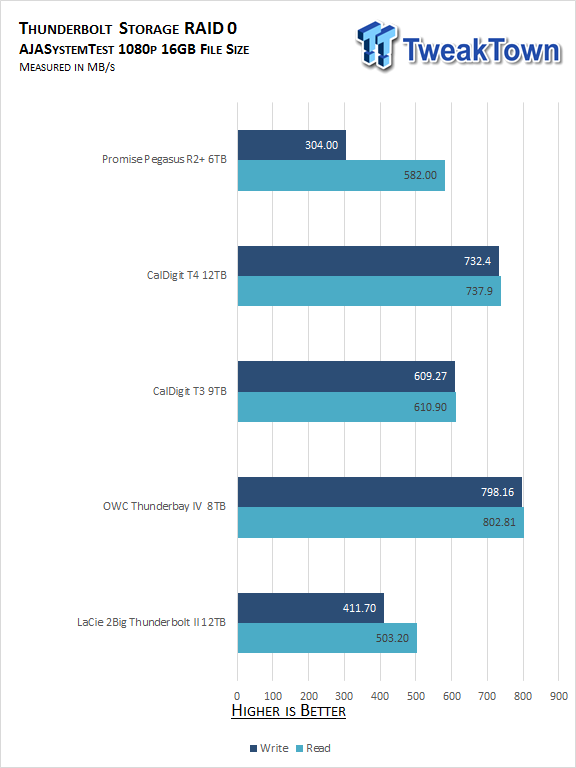 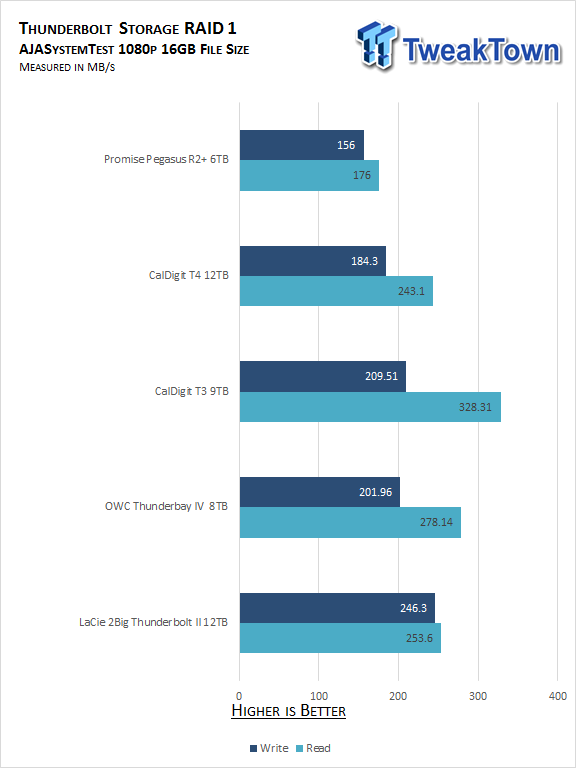 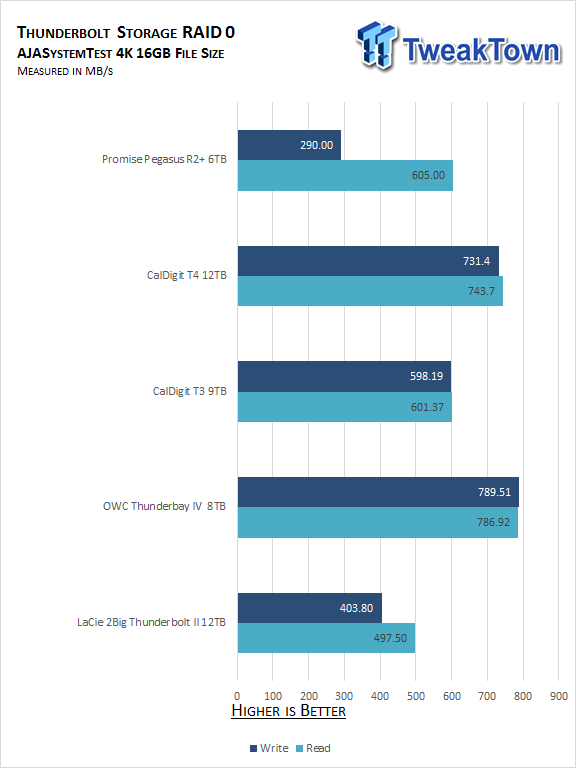 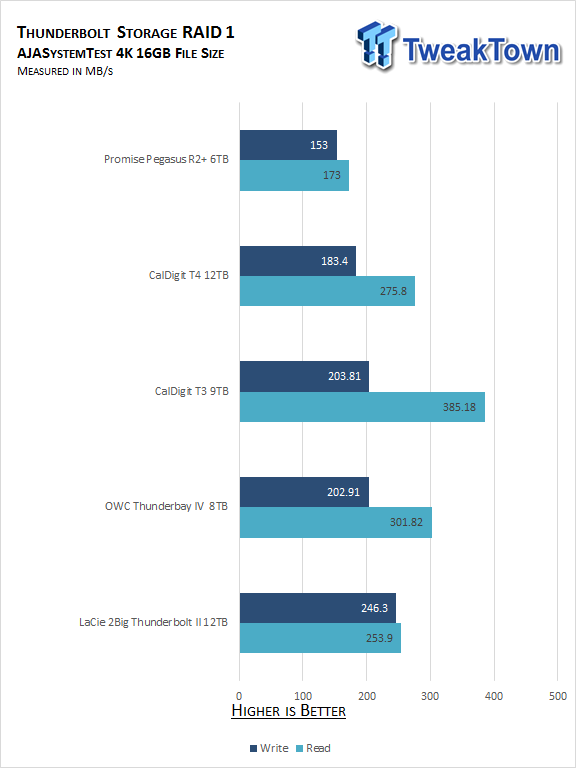 Finally, we switch to 4K testing where the RAID 0 excelled reaching 605 MB/s read and 290 MB/s write. 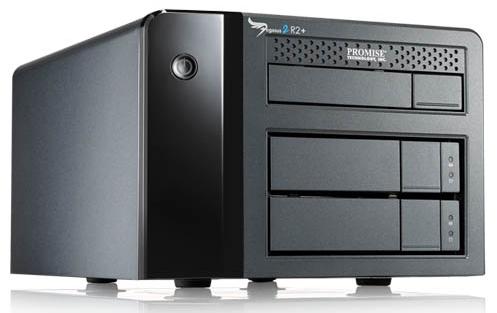 The Pegasus2 R2+ is the first product I have ever used from Promise Technology. I have used many other Thunderbolt products from WD, LaCie and even Drobo, but the Pegasus2 is different. The build quality of this solution is damn near flawless, but I don't care for glossy panels and the things that come along with it i.e. fingerprints, dust, scratches.

The R2+ has just a sliver of piano black gloss with the power button tucked away within. Adding to the R2+ is the metal chassis and large cooling fan and as you may have noticed in our up close look at the software it keeps tabs on both drives and the speed of the fan to maintain operating temperatures. I honestly haven't seen a Thunderbolt RAID solution with software as in depth and easy to use as the R2+.

The performance of the R2+ was pretty good but not stellar, but this is a hard drive based solution and only two bays at that. I was pleased to see Promise using Toshiba hard drives in their R2+ as they are certainly some of the quickest drives on the current market. In our testing, we found the RAID 0 array to touch upwards of 350 MB/s in DST while the RAID 1 array hovered around 190 MB/s. In AJASystemTest, the RAID 0 array scaled quite well with each increase in workload from 524 MB/s in 720p to 605 MB/s in 4K.

As far as the pods were concerned, I was delighted to see Promise enabled UHS-II support with their SD/CF solution and that was quite evident as our SanDisk Extreme Pro touched 233 MB/s read and 131 MB/s write. SSD performance was also quite good topping out at 465 MB/s read and 366 MB/s. write.

Overall, the Promise Pegasus2 R2+ is an extremely flexible storage solution for prosumers and in its 6TB configuration is an incredibly well-built hardware RAID solution for those wanting a dual connectivity Thunderbolt 2 / USB 3.0 device that currently carries an MSRP of $699.99 with two-year warranty.

The Bottom Line: Promise Technology's R2+ is a solid well built solution that packs in so many features including hardware RAID and swappable pods that it is definitely worth your consideration if your in the market for a top tier Thunderbolt solution.