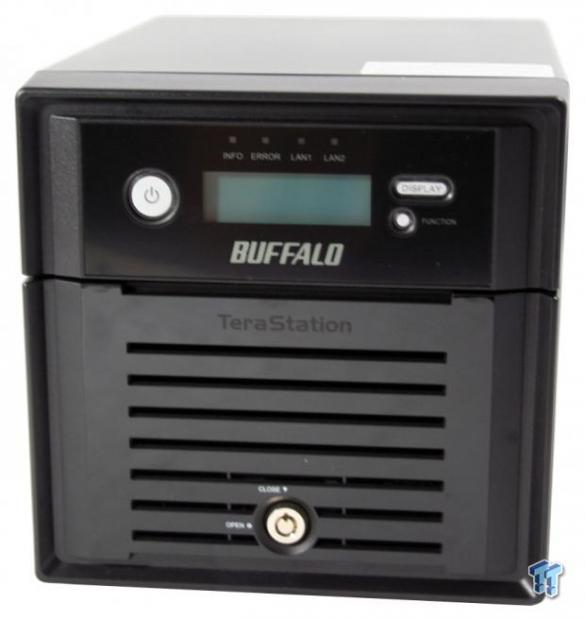 In past years, many of the Windows Storage Server platforms we have seen here at TweakTown have come from Buffalo. Expanding their WSS solutions, Buffalo is adding to their 5400 and 5600 product lines adding a two-bay variant dubbed the 5200 WSS. This solution is available in both 4TB and 8TB models, both running on the Windows Storage Server 2012 R2 platform. Operating on the Windows platform, a solution such as the 5200 WSS should appeal to small and medium business that want the seamless integration and reliability that Windows provides.

Underneath, the software layer Buffalo is outfitting the 5200 WSS with similar components found in the 5400. We have an Intel platform featuring the Atom D2550 CPU operating at 1.86GHz coupled with 4GB of DDR3 memory. 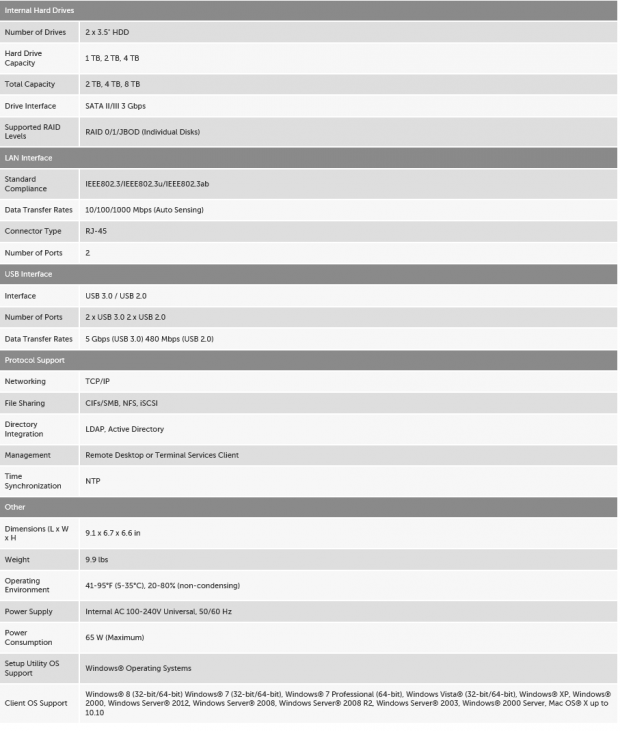 Digging into the specifications of the 5200, we find the TeraStation compatible with 1TB, 2TB, and 4TB drives with the SATA II or III interface. RAID modes supported include 0, 1 and JBOD with a dual Gigabit LAN interface. Further down, we see the 5200 houses two USB 3.0 and two USB 2.0 ports along with a front mounted VGA output.

The weight of this unit is 9.9 lbs with power consumption rated at 65 watts maximum. Client OS support ranges from Windows Vista to Windows 8 along with Windows Server 2008 to Server 2012. 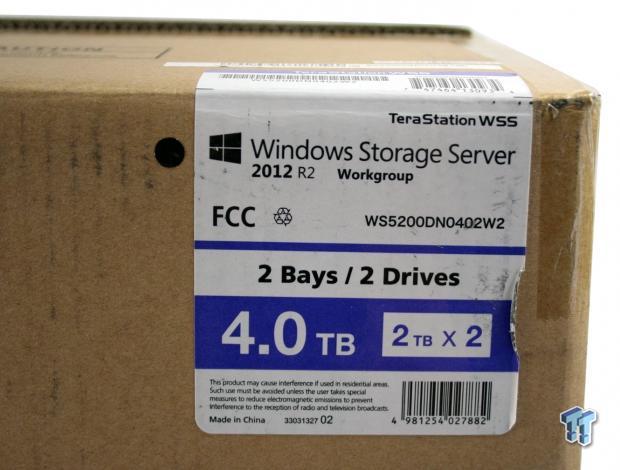 Packaging for the TeraStation includes a plain brown box with a label at the top right corner. This label carries capacity and model number. 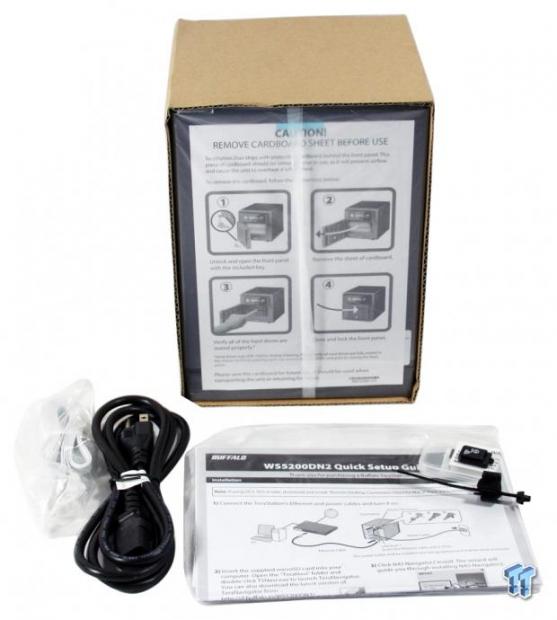 The scope of delivery includes the appliance, power cable, and reading materials. We also have a flash drive that houses the operating system recovery if needed.

The front of the TeraStation houses a small LCD screen at the top with the power button on the left and a set of LEDs above. 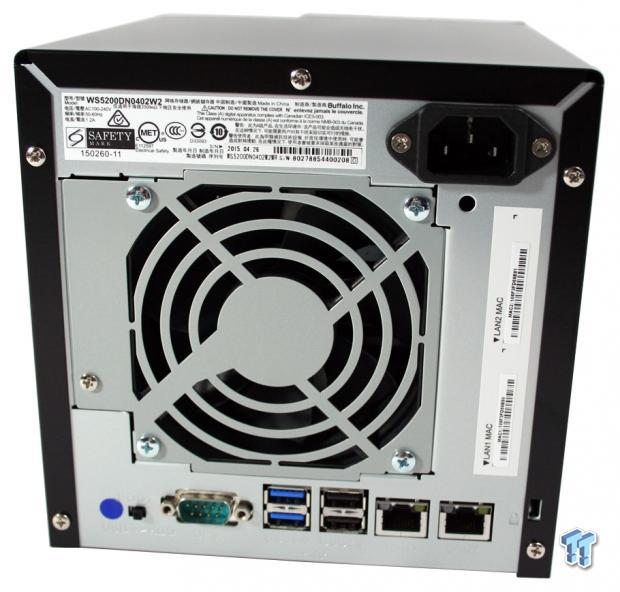 The back of the 5200 has the built-in PSU to the top while the I/O includes a switch for boot selection along with all four USB ports. Further down, we have both Gigabit LAN ports and the Kensington lock slot. 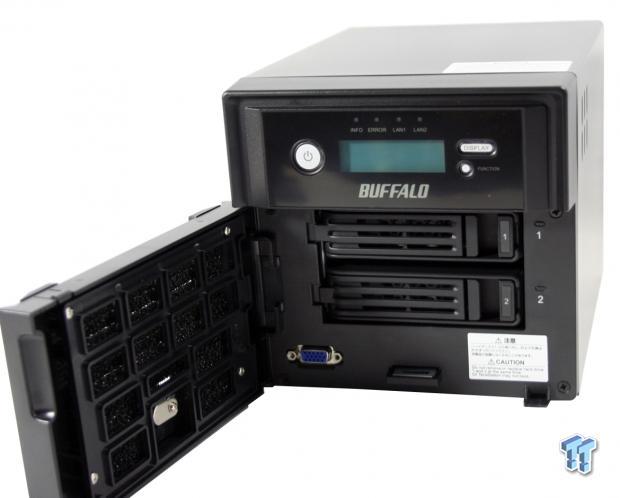 Opening the front panel, you can see the VGA connection for your monitor along with both numbered drive bays. 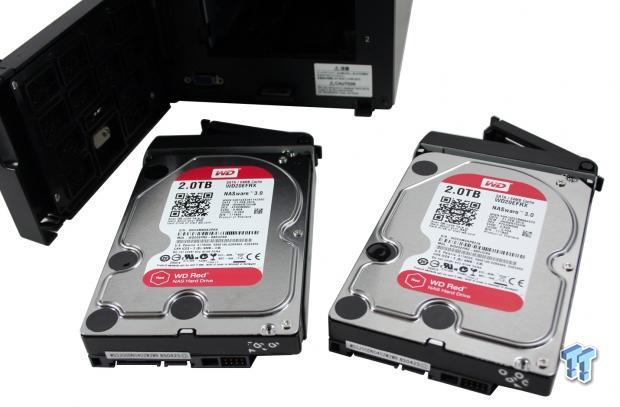 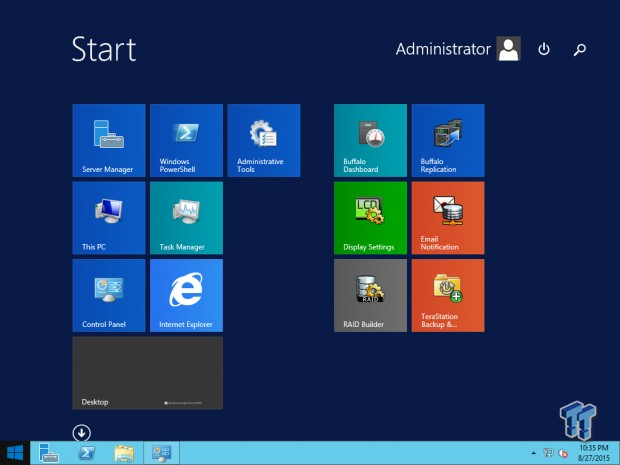 The platform used with the TeraStation 5200 is Windows Storage Server 2012 R2. It does have a few preinstalled applications from Buffalo. 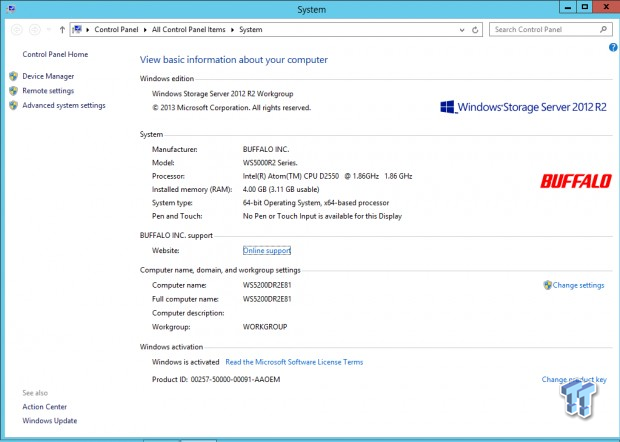 Here we have the System Information for the TeraStation including the CPU and RAM. 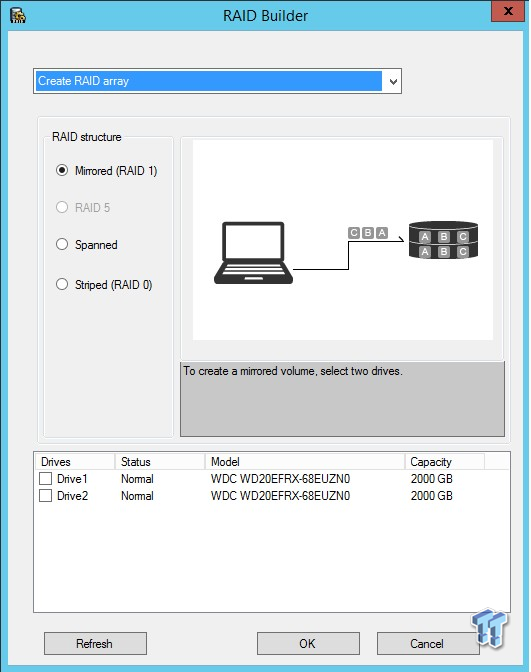 RAID Builder allows you to manage and create arrays. 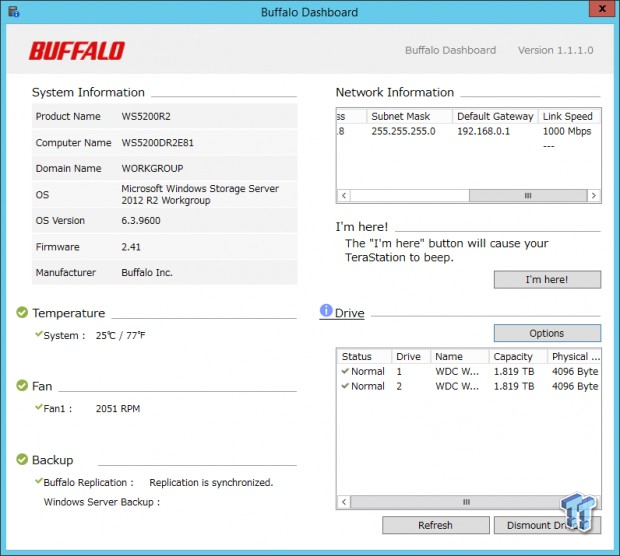 Another application is the Buffalo Dashboard that gives you a glimpse of all activity on the TeraStation. 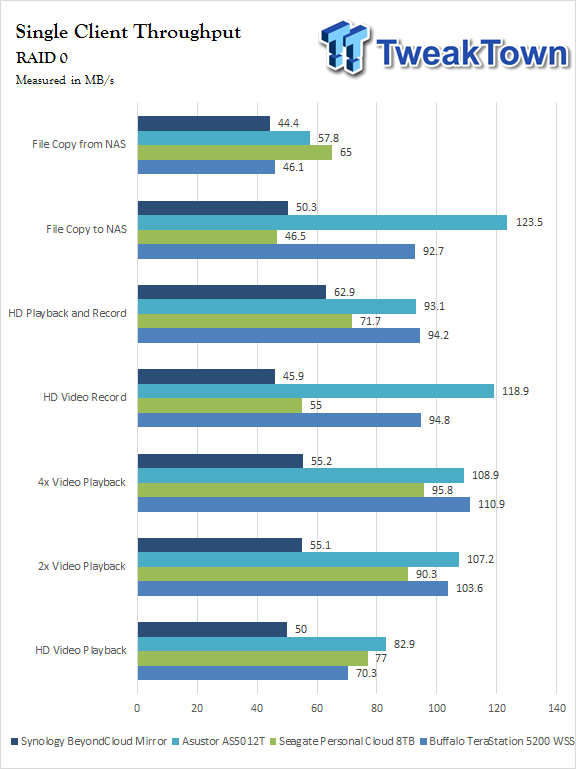 Starting testing off with RAID 0, I was quite surprised to see the TeraStation produce results right up there with the Asustor 5012T. As a matter of fact, it was able to take top marks in 4x playback and playback/record. 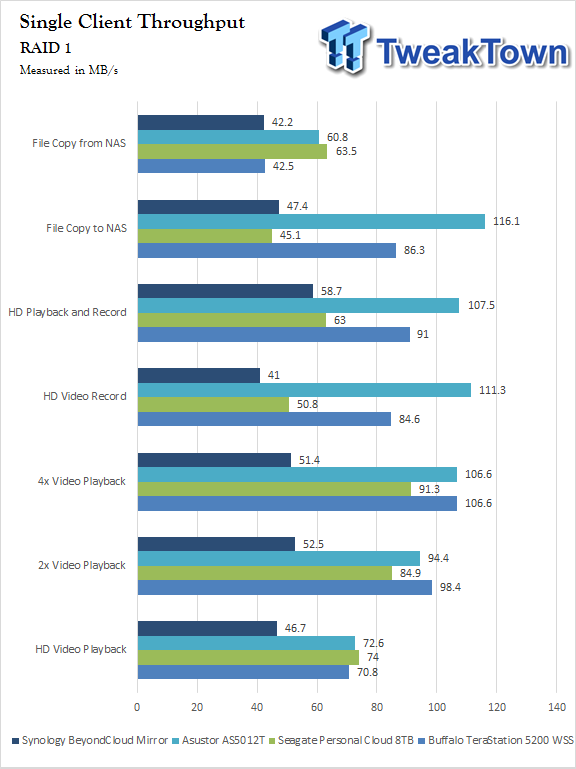 Looking at RAID 1, the Buffalo again was equally impressive with both 2x and 4x playback. 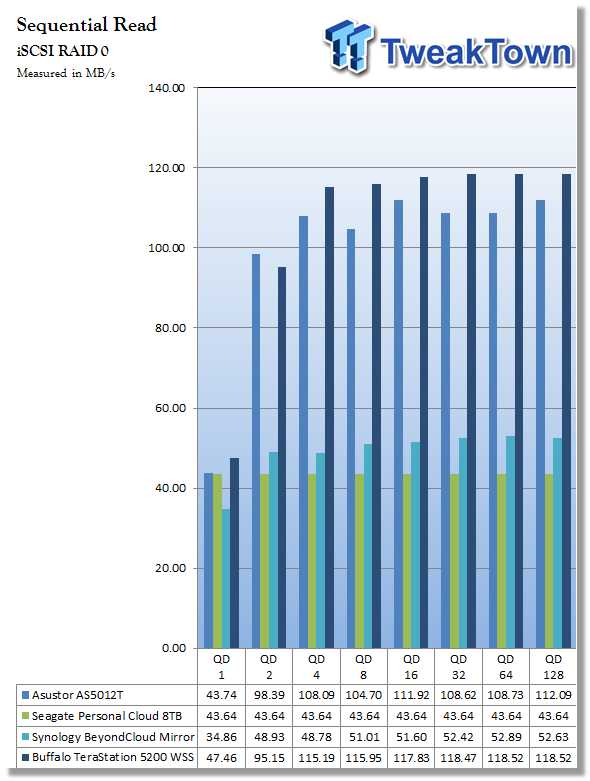 Starting sequential testing, we found the TeraStation producing some impressive results. Taking top marks in read, we have near 120 MB/s (effectively maximizing our Gigabit connection). 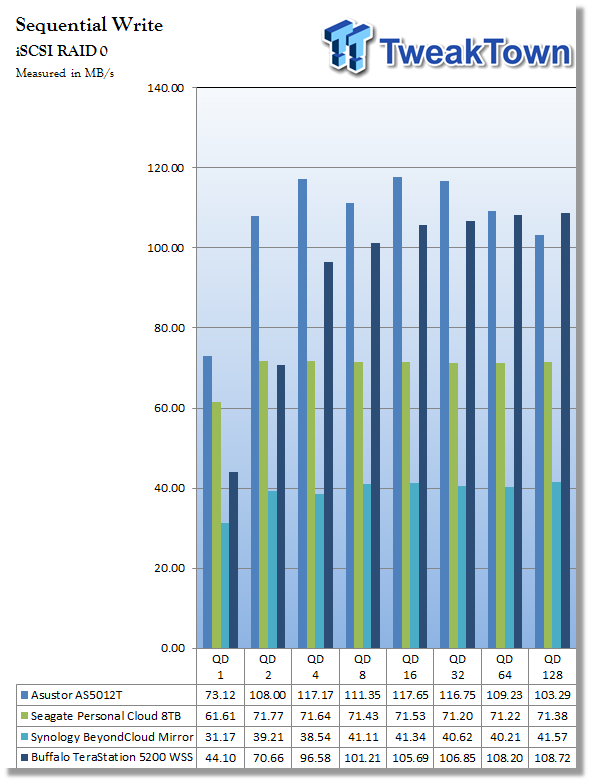 Sequential write touched just over 110 MB/s at QD128 just behind the Asustor unit. 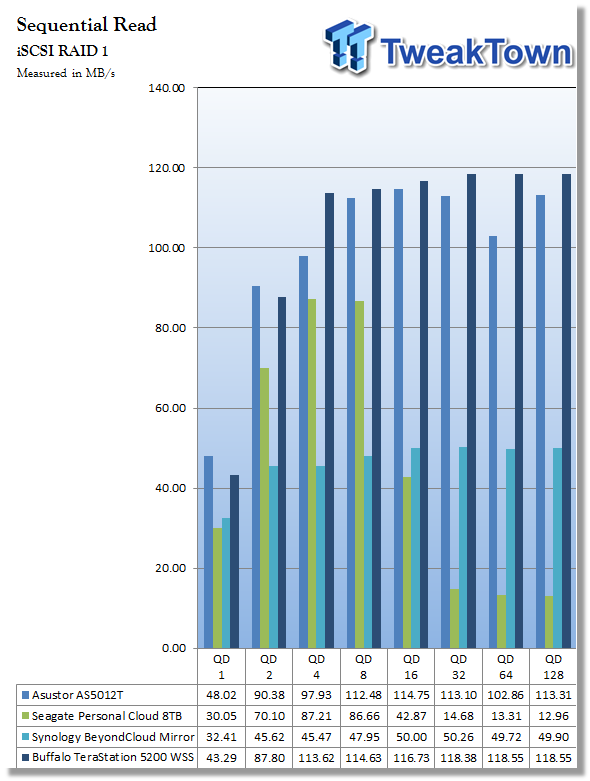 In sequential read testing RAID 1, the TeraStation unit again was able to reach near 120 MB/s. 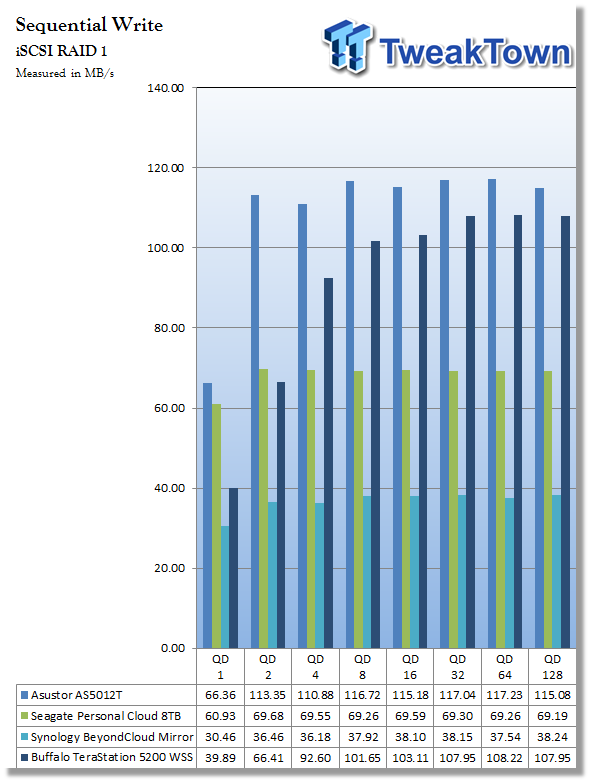 Write performance for RAID 1 again found no loss in performance as the Buffalo unit touched just over 110 MB/s. 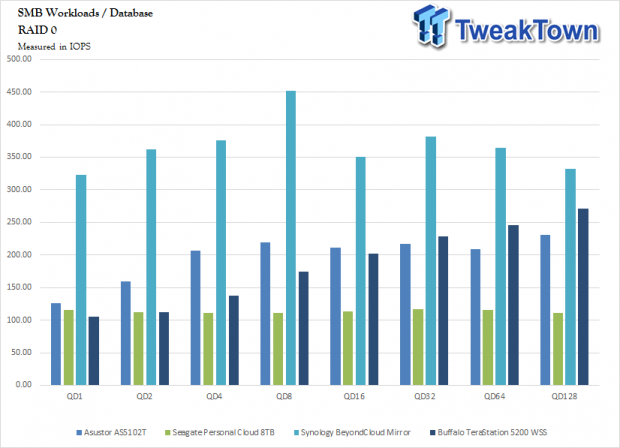 Diving into workloads, starting with RAID 0, the TeraStation unit was able to manage just over 250 IOPS in Database. 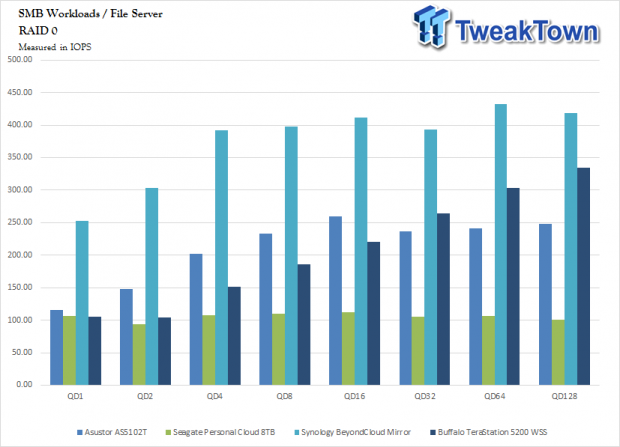 File server produced nearly 350 IOPS at QD128, just under the result we achieved with the BeyondCloud Mirror. 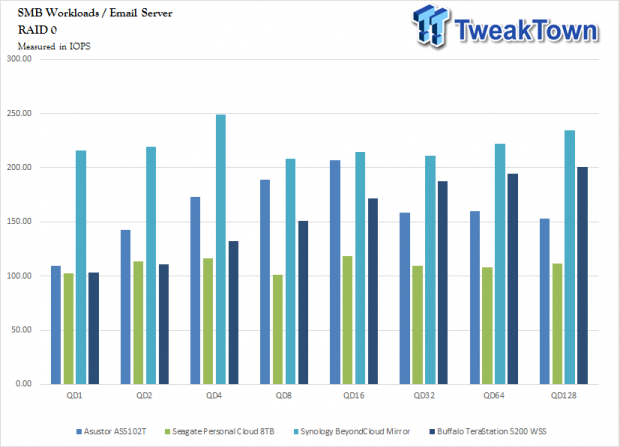 Next was Email Server, and again the TeraStation reached 200 IOPS. 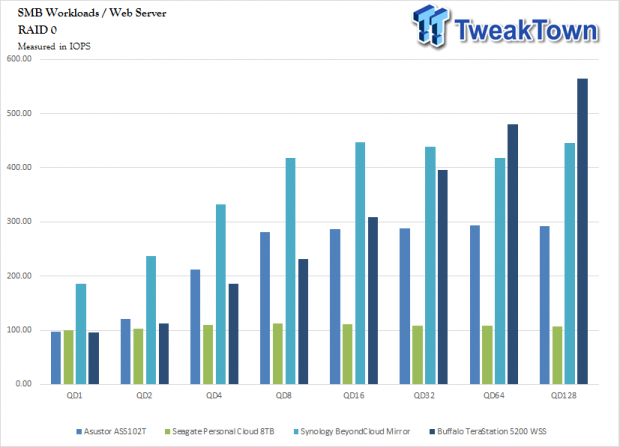 Moving to the Web Server test, the TeraStation unit excelled, reaching upwards of 600 IOPS at QD128. 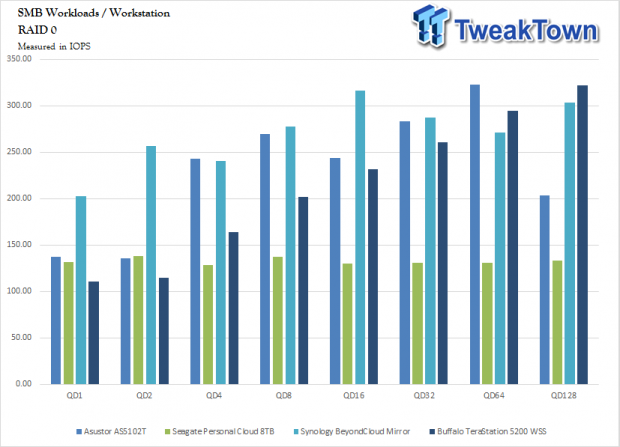 We finally reached Workstation where we find the 5200 unit near the top of our chart at just over 300 IOPS. 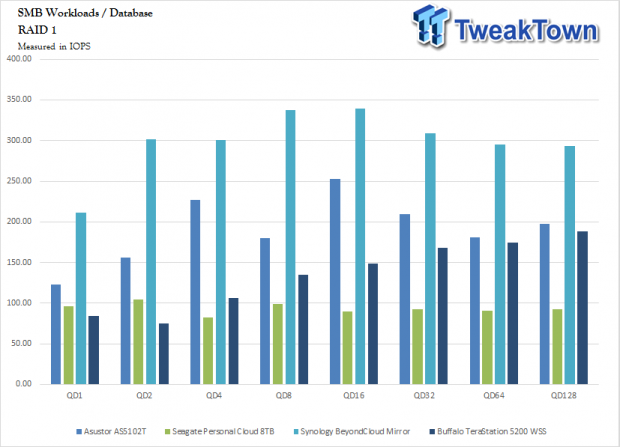 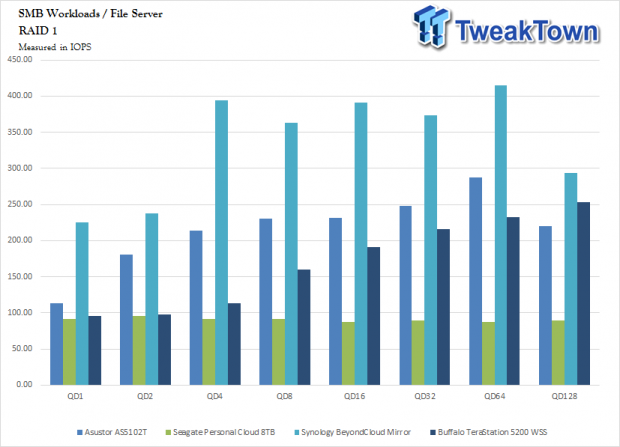 File server produced nearly 250 IOPS at QD128, just under the result we achieved with the BeyondCloud Mirror. 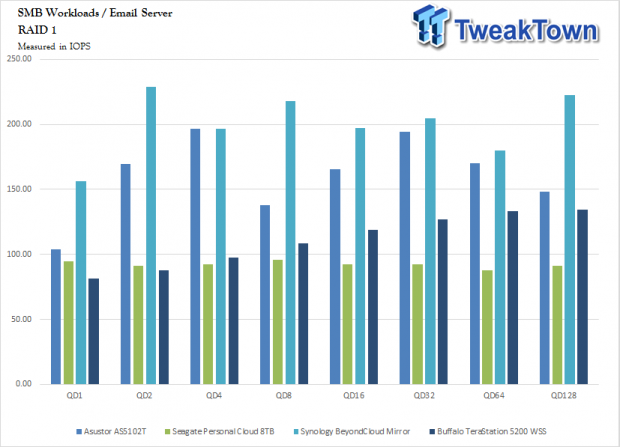 Next was Email Server, and again the TeraStation reached 140 IOPS. 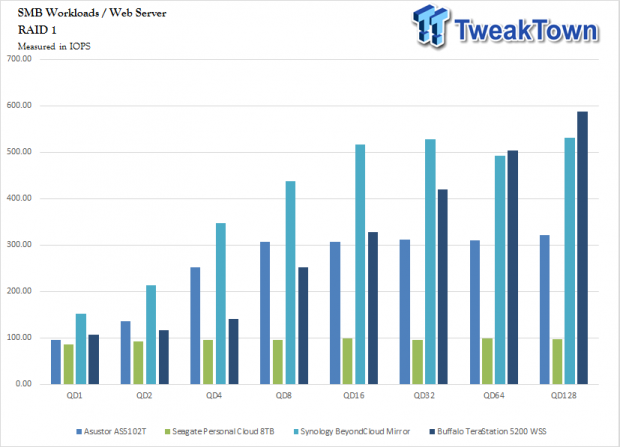 Moving to the Web Server test, the TeraStation excelled reaching upwards of 600 IOPS at QD128. 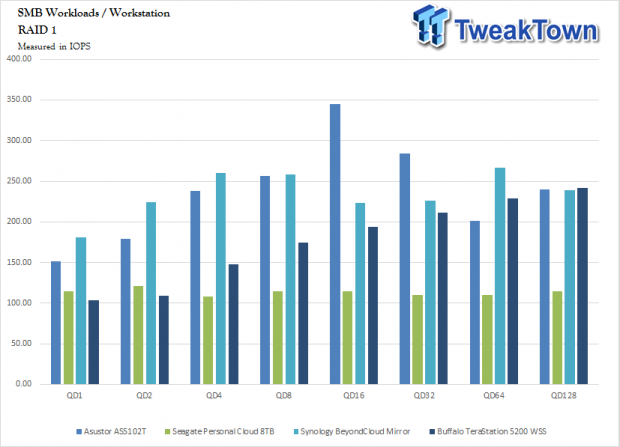 We finally reached Workstation finding the TeraStation device right with the Synology and Asustor units. 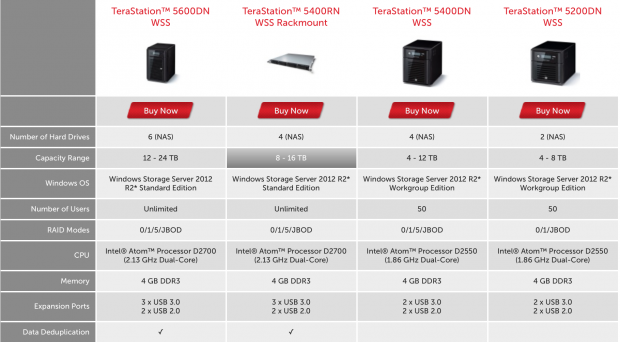 As we found in testing, the Buffalo TeraStation 5200 WSS is certainly a surprising appliance when it comes to performance. I, for one, didn't expect to see this amount of performance from a WSS machine and certainly not a pre-built unit. It is quite apparent with these new Windows Server solutions that Buffalo is stepping up its game.

Build quality is solid and certainly on par with other SMB solutions I have had in the lab. Top to bottom, a steel chassis and shell is used, while the front panel and drive trays use some decent quality plastics. The drive trays slide with ease making swapping drives simple and while they are not tool-less, I had no issues with the screws. For those that want to swap drives, either for more capacity or performance, the TeraStation unit does come with a bootable recovery disk. And by flipping the switch on the back of the unit, it will be in USB boot mode.

The performance was good and what we expected of this unit. While Intel Atom based platforms are standard these days, they do have a place in the storage market and as we found today can perform quite well with the right drives. Sequential read and write topped 100 MB/s in both RAID 0 and RAID 1 modes. In workload testing, there were many times the TeraStation unit was at the top or near the top of our charts.

With all the Linux based appliances on the market, some may not realize there are affordable options on the market for a Windows Storage Server. Things are certainly set to change as Buffalo begins to launch turnkey solutions from the TeraStation product lineup.

Overall, the TeraStation 5200 WSS is a surprisingly solid performer that comes in with an MSRP of $1049.99 and a three-year warranty.

The Bottom Line: Buffalo's TeraStation 5200 WSS does have a high initial cost, but it does come as a turnkey solution with ample performance for any small medium business.