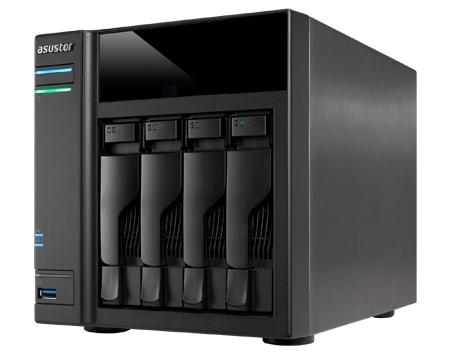 In early April of this year, we had a look at the ASUSTOR AS5102T, a two bay prosumer appliance that after testing we gave our "best performance award". The AS5004T we are looking at today comes from the same 5000 series of appliances from ASUSTOR and features the same Intel Bay Trail platform at its heart.

Bay Trail is perhaps the largest upgrade to the NAS market since vendors started putting Atom processors in appliances a number of years ago. With Bay Trail, and more specifically the J1800 with the AS5004T, ASUSTOR adds to its lineup with Quick Sync Video Technology, adding a hardware encoding engine for quick transcoding of all sorts of media.

With the AS5004T, ASUSTOR is touting an energy efficient NAS platform with marketing numbers that say it's capable of producing read/write speeds up to 112 MB/s. With the J1800 at the center in this appliance, ASUSTOR has also paired with it 1GB of DDR3L. This memory is upgradable to 8GB by simply removing the panel in a two step procedure. Like many modern NAS platforms, the AS5004T is part storage and part media hub. ASUSTOR does this by utilizing XBMC Kodi supporting 1080p HD and 5.1/7.1 Multi Channel Audio. 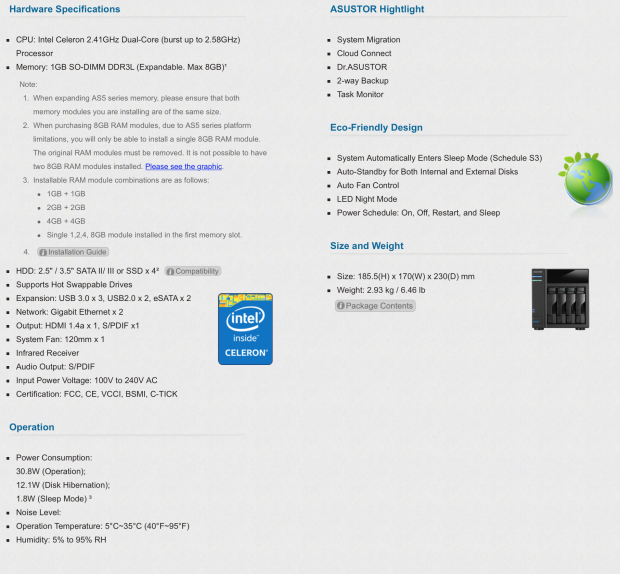 Above, we have the full system specification pulled from the ASUSTOR website. As you can see, we have the Intel Celeron J1800 SoC running at 2.4GHz with a boost clock of 2.58GHz paired with 1GB of DDR3L. Adding to this, we have four bays that are hot swappable, along with three USB 3.0 ports, dual USB 2.0 and two eSATA. Connectivity goes on further adding dual gigabit LAN ports in addition to a single HDMI 1.4a port and S/PDIF connection. Power consumption of this unit is rated at 31 watts in operation, while hibernation is listed at 12 watts and sleep mode at just 1.8 watts. 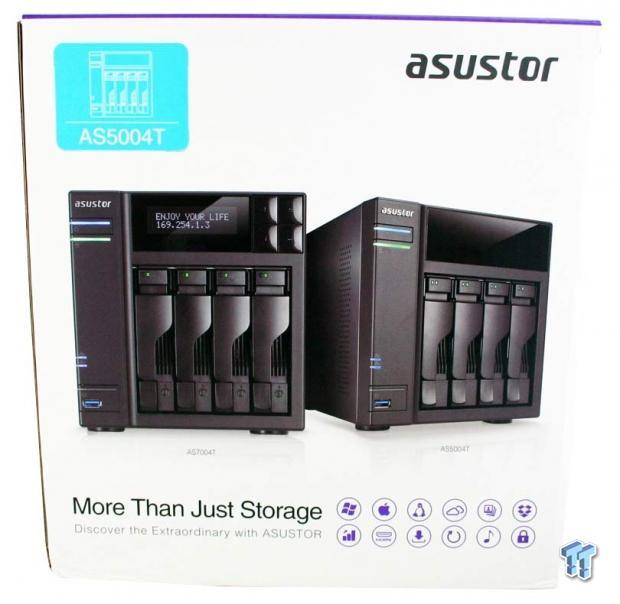 Packaging for the AS5004T carries an image of the NAS with marketing information below. 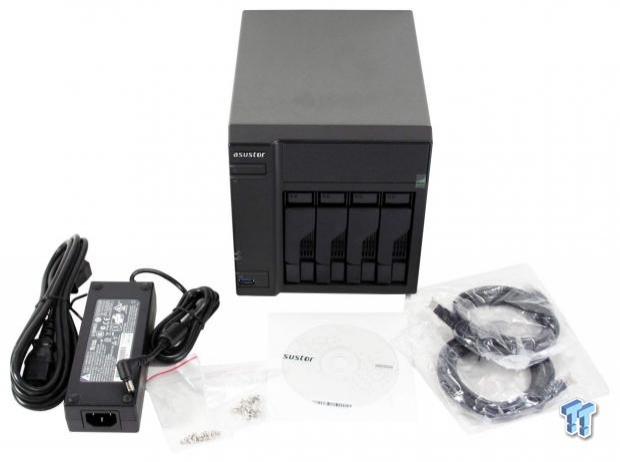 Scope of delivery includes the power cable, Ethernet cable, reading materials, and the NAS unit itself of course. 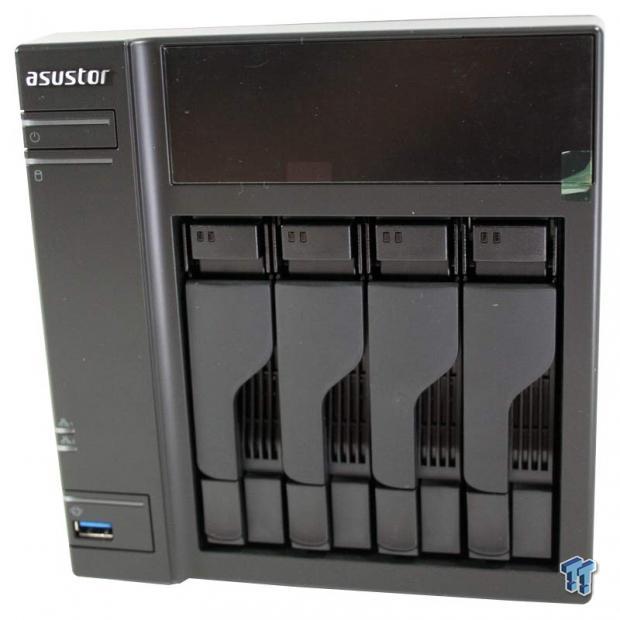 The front of the NAS houses four drive bays, while a small LCD screen has been fitted above. To the left, we have a two LEDs for power and LAN activity, while each of the drive trays is fitted with an activity LED. 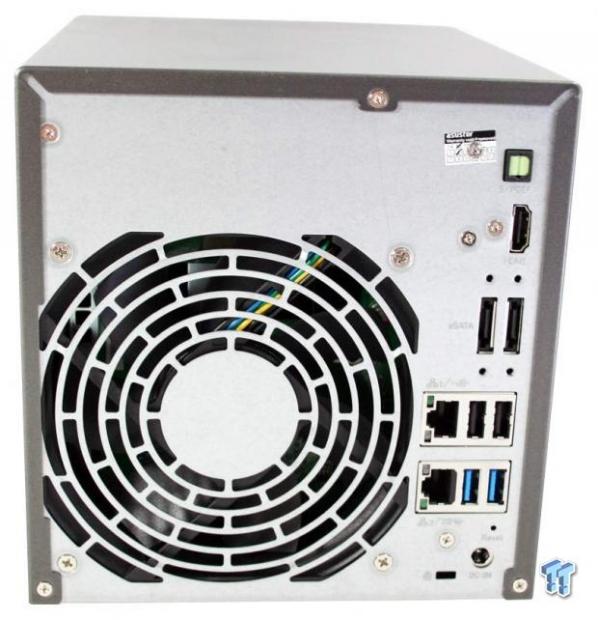 The backside of the NAS starts off with the optical audio output, and next to it is the HDMI port. Following this, we have both of the eSATA ports with those paired next to dual gigabit Ethernet and USB 3.0. 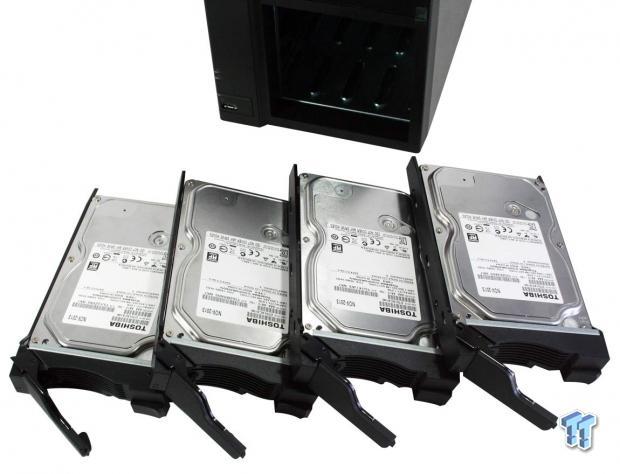 The trays for the AS5004T are metal with a honeycomb backing. Each tray has a small locking mechanism onboard along with an activity LED.

By going straight to the IP address of the NAS appliance, we were able to forgo the standard finder application and get straight to setting up the ASUSTOR.

After choosing a few options, the NAS takes care of the rest and finishes setup. This took our unit about 10 minutes to complete. 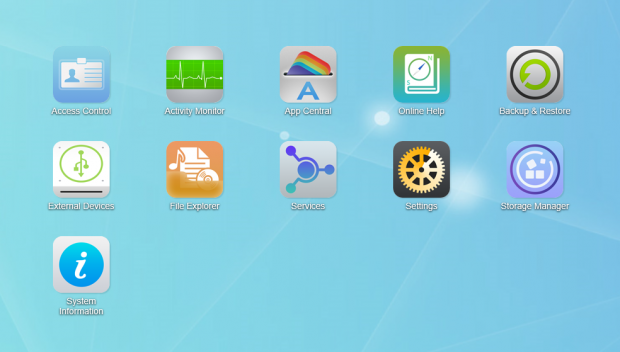 The main page after entering the NAS WebGUI gives you all your configurable items on a single page. Here we have NAS activity, the app store, and backup restore. Of course, we have the standard file explorer and storage manager as well. 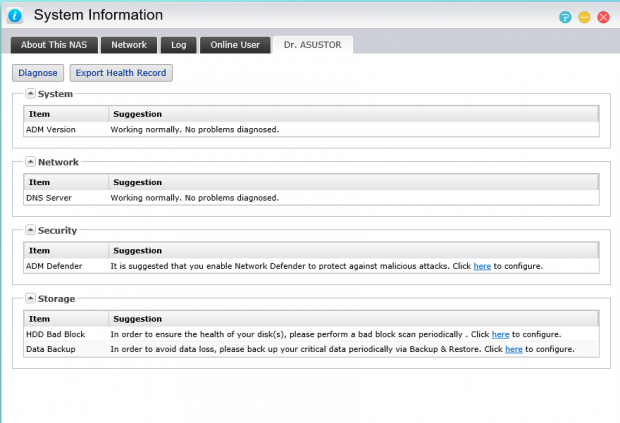 One of the unique features of any ASUSTOR appliance is the Dr. ASUSTOR feature that can diagnose the appliance if something was to go wrong and direct you how to fix it. 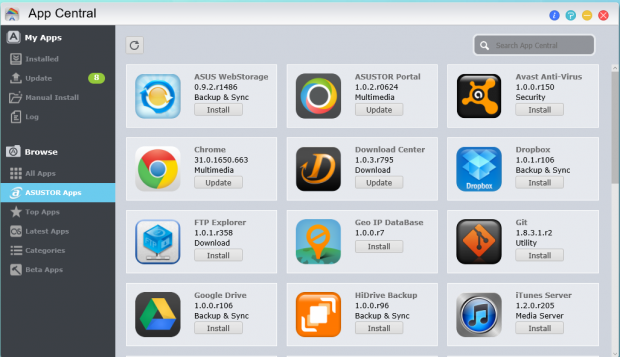 Above, we have a quick glimpse of some of the applications available in ADM. 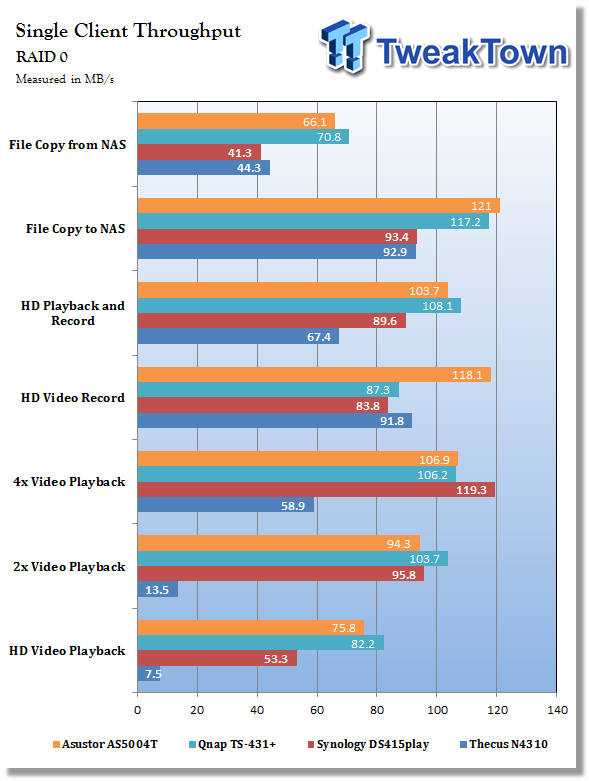 Starting out with our testing, we have similar SoC based appliances from QNAP, Synology and Thecus. The ASUSTOR unit, as seen above, did quite well with RAID 0 topping 100 MB/s in four of the seven workloads. 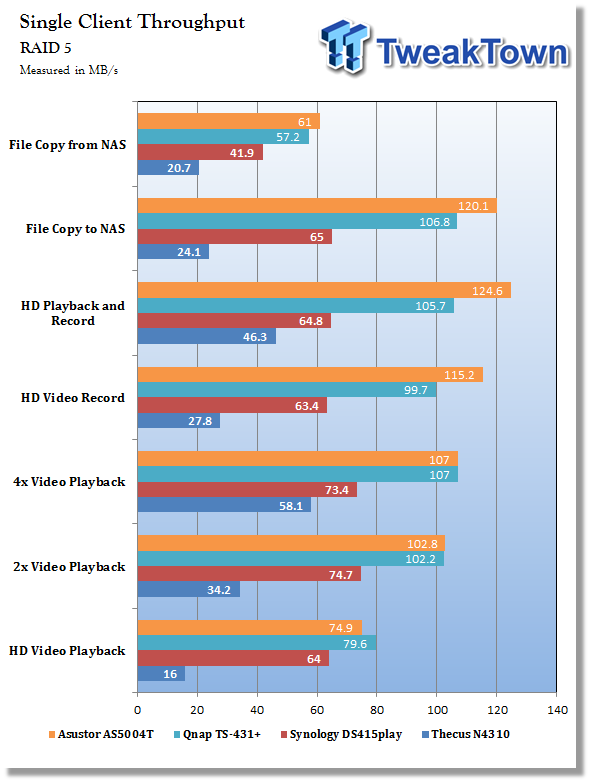 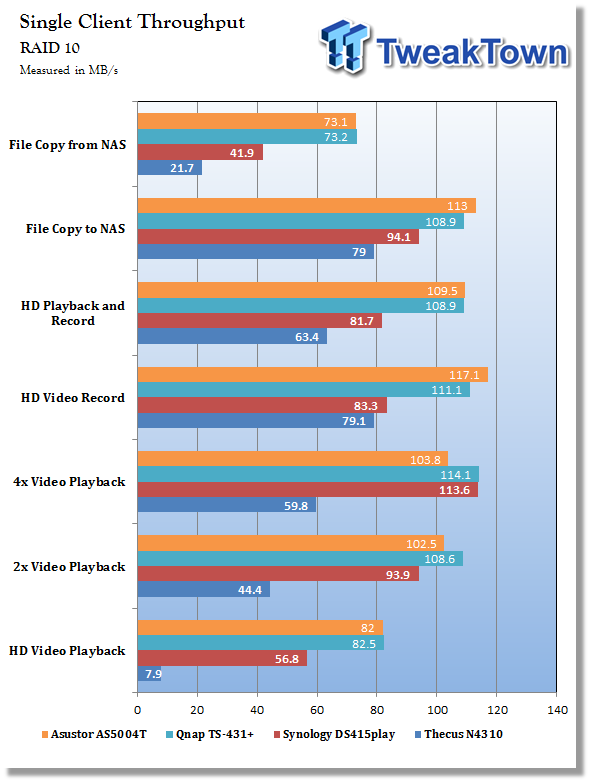 With RAID 10, we find the QNAP and Synology units giving the ASUSTOR fits, but overall another round of impressive performance from the AS5004T. 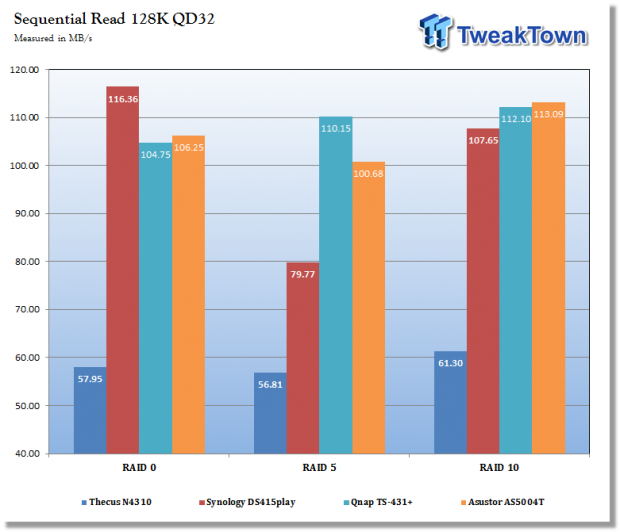 Sequential read performance was quite good for all three RAID modes, though RAID 0 and 10 stand out slightly more at 106 MB/s and 113 MB/s, respectively. 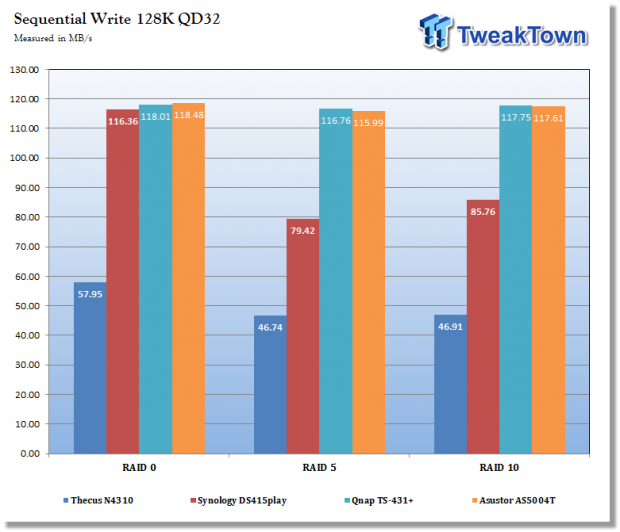 Sequential write shows a performance ceiling with our test setup around 118 MB/s. The ASUSTOR was able to illustrate this in all three RAID modes. 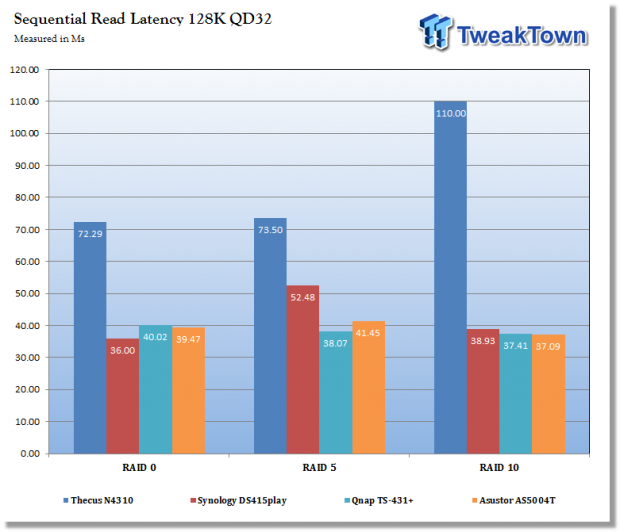 Latency results for read were slightly lower than the QNAP solution and a touch higher than the Synology unit with RAID 0, but switching over to RAID 5 changes that as the ASUSTOR finds itself in the middle of the pack. 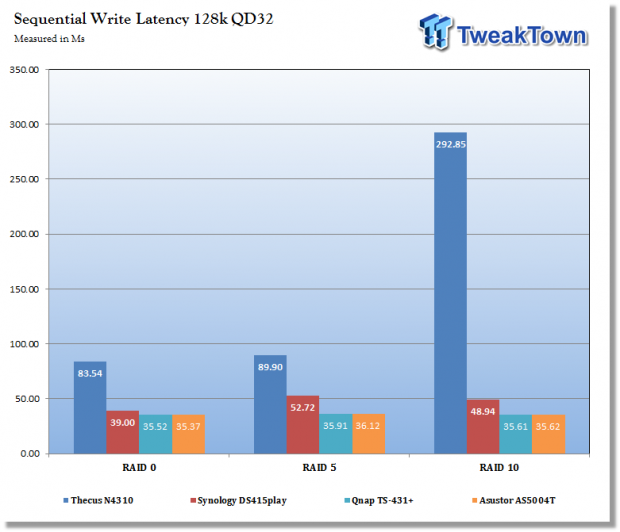 Write latency was even more consistent with all three RAID modes staying within 0.6ms of each other throughout testing. 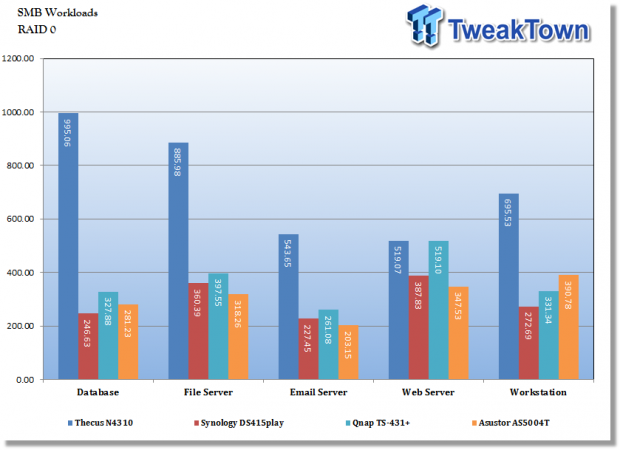 RAID 0 started our SMB workloads with the ASUSTOR unit finding its peak performance with workstation at 390 IOPS. Web Server was second at 347 IOPS, while File Server wasn't far behind at 318 IOPS. 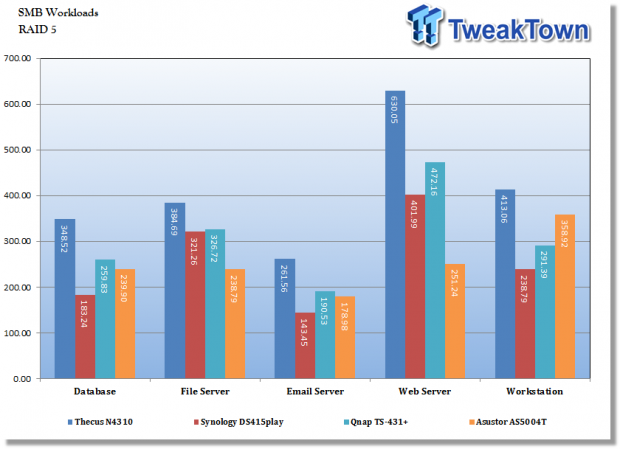 Next up, we have our RAID 5 array where the AS5004T again excelled workstation at 358 IPS with Web Server, File Server and Database all within 10 IOPS of each other. 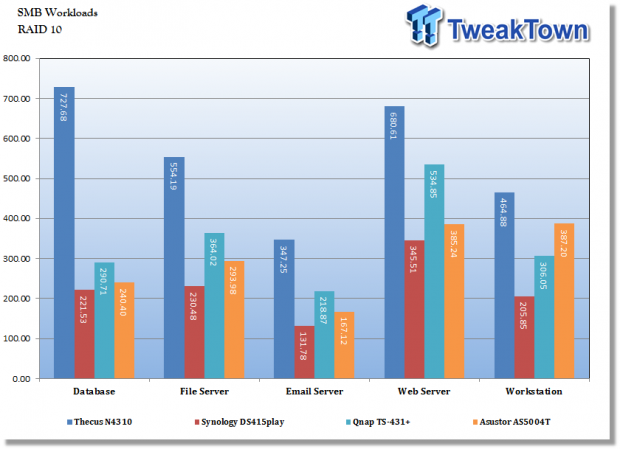 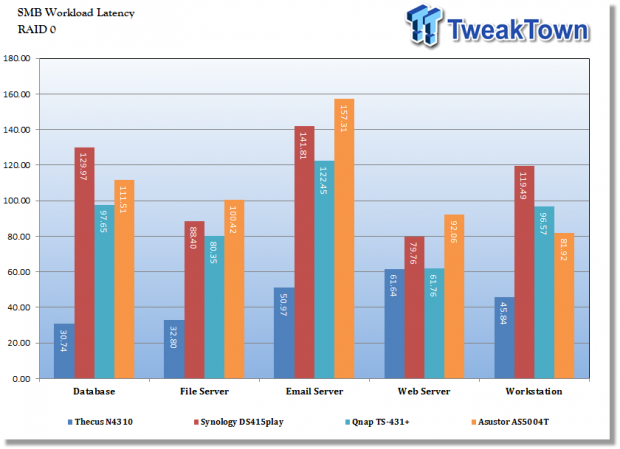 Workload latency for the AS5004T was quite high and in some cases the highest on our charts as the case with Email Server on RAID 0. The ASUSTOR peaked at 157ms in this case, while the lowest point came with Workstation at 81ms. 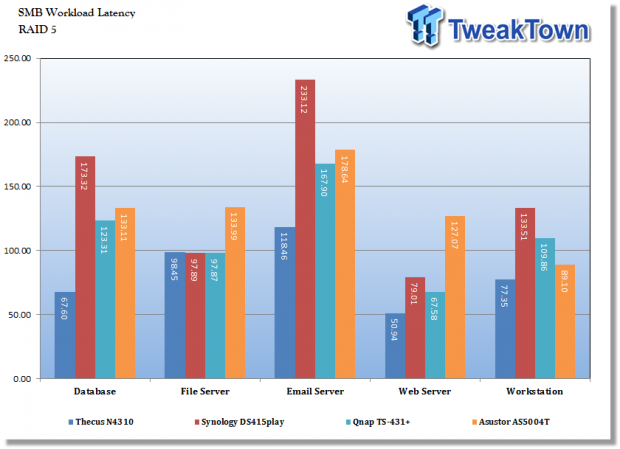 RAID 5 gave us similar results and again we find Email Server causing the highest latency at 178ms, while Workstation was the lowest at 89ms. 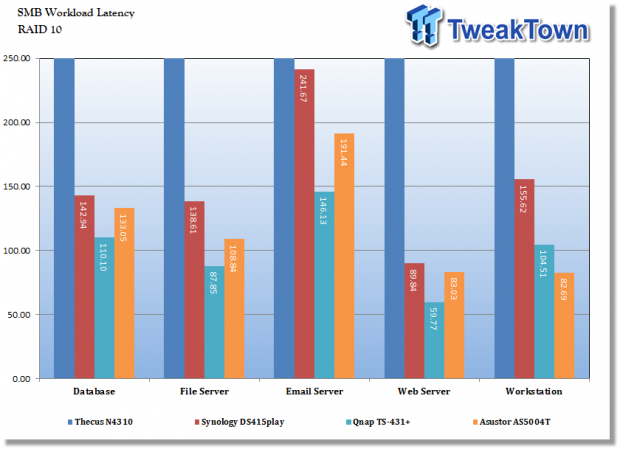 Moving on to RAID 10, we found both Web Server and Workstation hovering around 83ms.

The AS5004T, like the last ASUSTOR solution we tested, is a solid performer, and in many cases a top performer. Build quality is on par with what we have seen from ASUSTOR in the past and certainly meets up to and exceeds my expectations. As ASUSTOR has been around for a number of years now, they have certainly grown and that can be seen with the great support and the number of ADM apps increasing.

Performance of the NAS in our single client testing was quite spectacular to the point where we actually touched 121 MB/s in file copy operations. We were also able to achieve 118 MB/s in video record, two of the highest score I have seen personally with any appliance. With iSCSI enabled, we were able to test sequential performance of the ASUSTOR, and as you may have seen, this solution passed with flying colors reaching 106 MB/s in RAID 0 and 113 MB/s in RAID 10.

However, those numbers only added to the solid RAID 5 performance achieving 100 MB/s read. Workload testing showed the strong performance of this solution as a workstation, as it nearly topped every chart on its way to some impressive IOPS. Of course, its secondary was Email Server as we typically see with NAS appliances.

Overall, the ASUSTOR AS5004T offers a solid package for those wanting both performance and a home media hub. Its MSRP at $439.99 puts it just a few dollars cheaper than competing solutions, such as the QNAP TS-451.

The Bottom Line: ASUSTOR's AS5004T is a solid NAS solution with a good amount of features for the standard consumer. Adding to that is its strong price point, making it one of the best bang for your buck four bay appliances with media features on the market today.