Asustor's AS5102T NAS is a solid performer while carrying one of the best price points in the two bay NAS segment.

It's certainly no secret that the NAS platform has evolved from the days of Marvell SoCs and a storage-only approach. In the last four or five years, we have seen the introduction of Intel as a preferred partner for these platforms, starting with the Atom and now including the Quad Core Bay Trail platform.

The AS5102T is the latest in a series of NAS appliances from Asustor. For anyone that doesn't know, Asustor emerged a few years back with a mission to produce high-quality NAS appliances that the typical consumer could afford, and after four years and quite a few successful releases, they have made quite a name for themselves.

The AS5102T is the latest two bay prosumer NAS solution from Asustor. Internally, the components are quite similar to what we found in competing products like the TS253 Pro we reviewed back in December. We have an Intel Celeron Quad Core processor at the heart of this platform, with 2GB of DDR3L supporting. The I/O panel consists of three USB 3.0, two USB 2.0 and two eSATA ports with dual Gigabit Ethernet and a HDMI 1.4a compliant video output.

For anyone that has used an Asustor NAS appliance in the past, you know that ADM is the operating system on board these appliances; the version used during testing today is 2.3.3.R362. If you are interested in purchasing a NAS appliance from Asustor, you can view a live demo of their OS here. 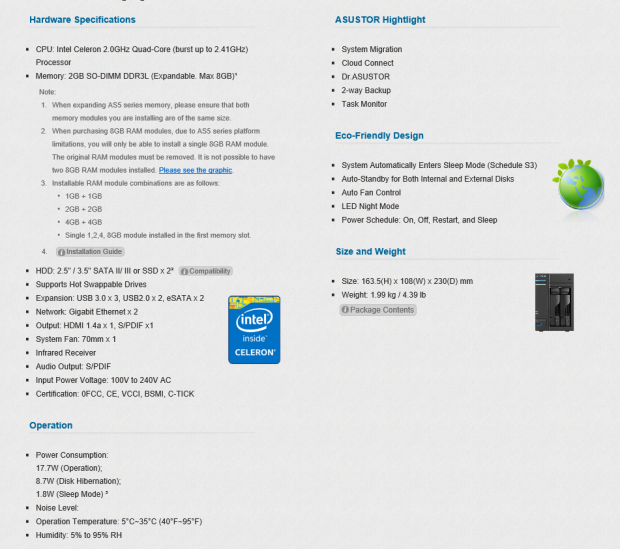 Above, we have the full system specifications for the 5102T pulled from the Asustor website. As you can see, the Quad Core Celeron sits at a base frequency of 2GHz, but is allowed to burst up to 2.41GHz if needed. The included 2GB of DDR3L can be upgraded to a full 8GB using two 4GB sticks of matching modules. The 5102T supports both 2.5" and 3.5" hard drives with additional support for some solid state drives. As we mentioned above, the I/O panel of this appliance is packed full with three USB 3.0, two USB 2.0, and two eSATA ports, in addition to dual Gigabit Ethernet and a HDMI 1.4a compliant video output.

PRICING: You can find the Asustor AS5102T for sale below. The prices listed are valid at the time of writing, but can change at any time. Click the link to see the very latest pricing for the best deal. 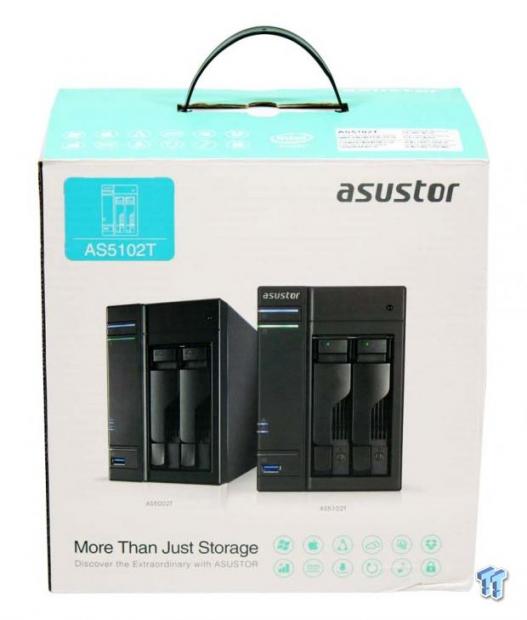 Packaging for the Asustor carries bright colors and images of the NAS on the front. The bottom right corner lists compatibility of the appliance, and the very top of the box has a sticker with full system specifications. 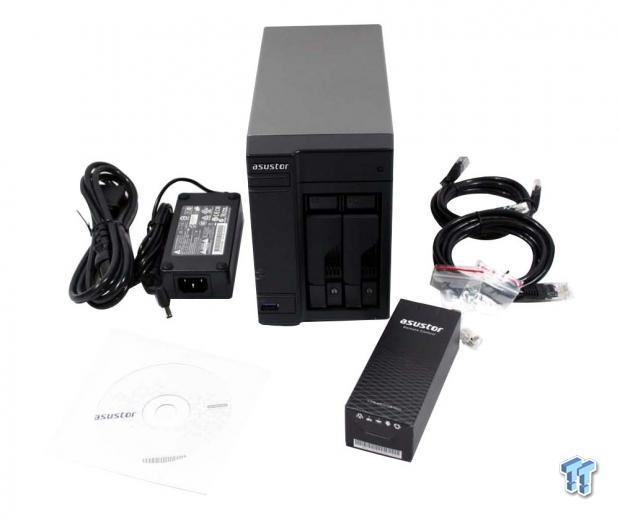 Scope of delivery includes the power adapter, two ethernet cables, drive screws, and a software disc. The media remote seen in the image is not part of the standard package, but can be purchased for around $35 USD. 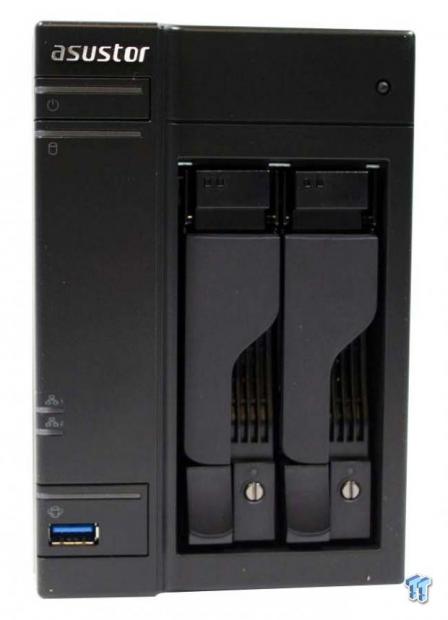 The front of the tower houses quite a few LEDs to denote LAN, power, and disk activity. The bottom left houses a USB 3.0 port for quick backups, and the drive trays are lockable. 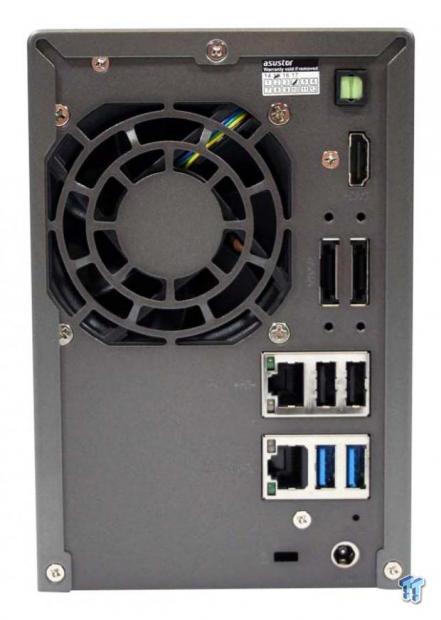 The back of the NAS is packed with outputs; we have the optical audio output at the top, followed by the HSMI port, eSATA, and then dual USB 2.0 ports. Gigabit ethernet and USB 3.0 round out the outputs, and we do have the power input and Kensington lock. To cool the drives and NAS itself, Asustor has loaded the 5102T with a 70mm cooling fan. 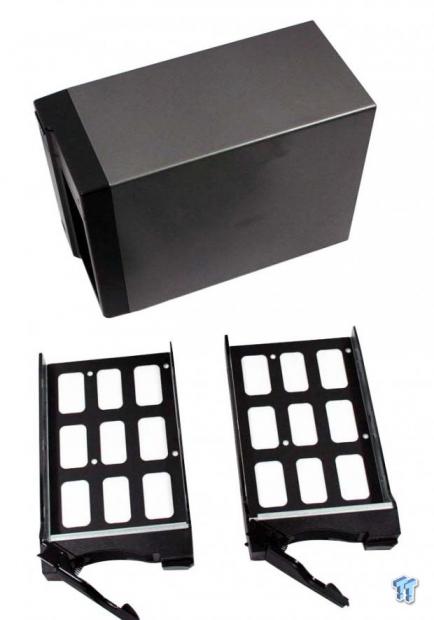 The drive trays are metal with nylon insert to protect drives from shorting against the NAS frame.

Our Consumer NAS test system is similar to what you may have set up at home. Here we have the base of a GIGABYTE Z97X UD7 TH housing an Intel Core i7 4770 with 16GB of Patriot Viper DDR3. Our Operating System of choice is Windows 8.1 x64 Enterprise with all available updates and patches installed on a SanDisk Extreme Pro 960GB SSD. 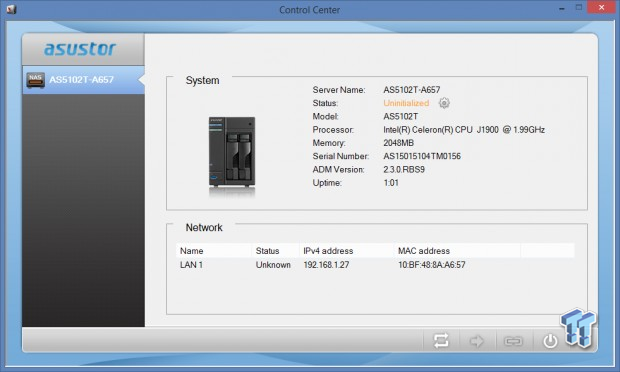 The Asustor finder application is the control center. Upon initial startup we have an uninitialized NAS with a Celeron J1900 and 2GB of memory.

We have two options for setting up the Asustor AS5102T. The first option is the one-click setup that allows the NAS to choose all of the options for you, and the second option is a custom setup.

After choosing our options and putting in some information, the NAS proceeded to setup. This part of the process took the longest, and we waited here for a good 30 to 40 minutes. 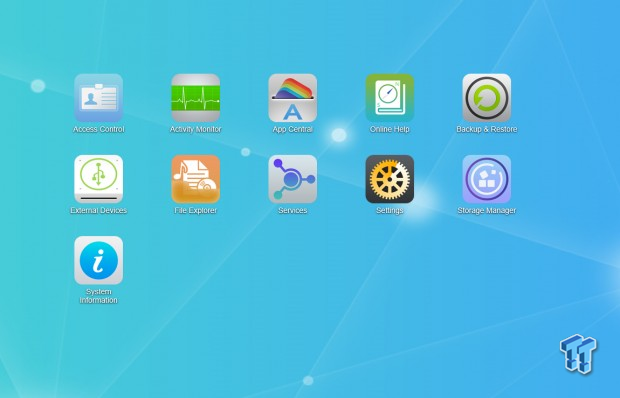 Upon logging into the NAS, we have a full complement of options to go through. The options here include everything from the standard storage manager and app center to new items like activity monitor, and backup and restore. 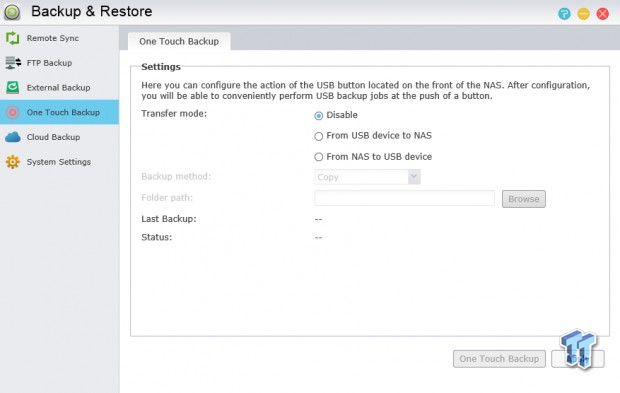 The backup and restore menu intrigued me, as I haven't had my hands on an Asustor appliance in quite some time. Accordingly, I ventured over to see what, if anything, has changed. From the top down, we have quite a few options here, including remote sync, FTP back, and external backup. In addition to those features, you can use one touch backup, or trust your data to the cloud with Amazon S3. 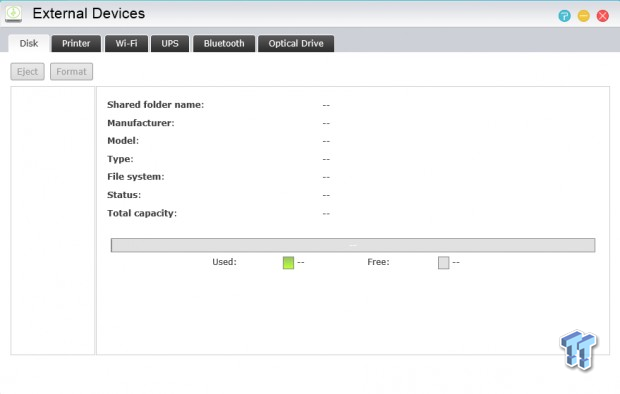 Another surprise for me was the intense amount of USB device support. As you can see, we have everything from disks to printer and even optical drives within this menu. 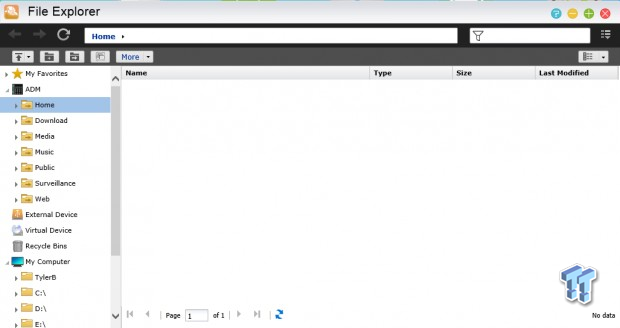 The file explorer is a given, but it can be a godsend when your network is on the fritz. 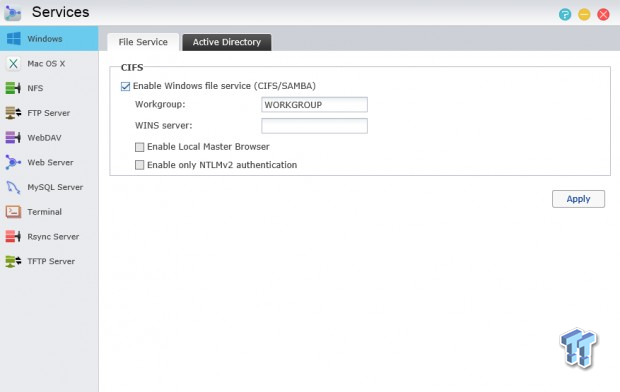 Of course, no NAS appliance is complete without a full complement of network service support. The 5102T includes SAMBA, AFP, NFS, FTP, and Web Server, to name a few. 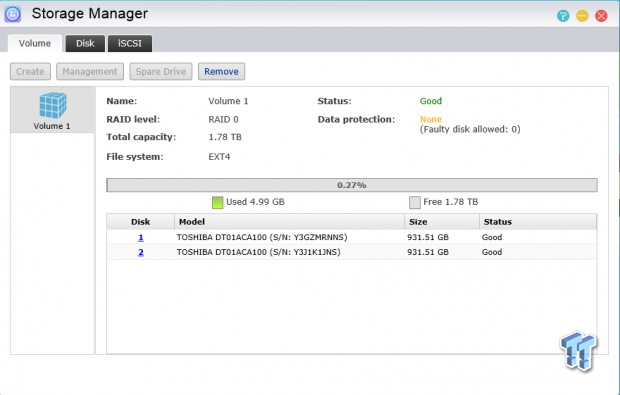 Above, we have the storage manager with full iSCSI support. 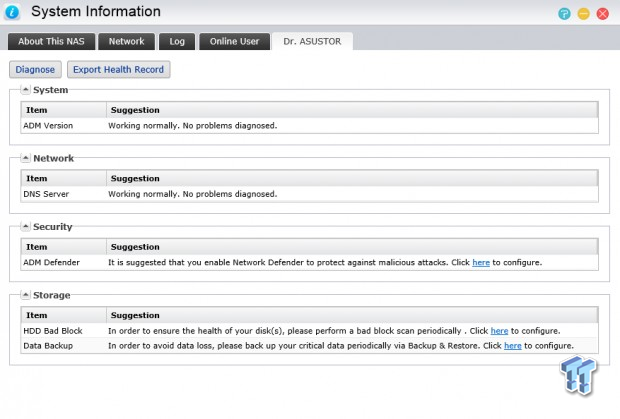 Yet another unique feature of the Asustor platform is Dr. Asustor, which will diagnose any issues the NAS is having. 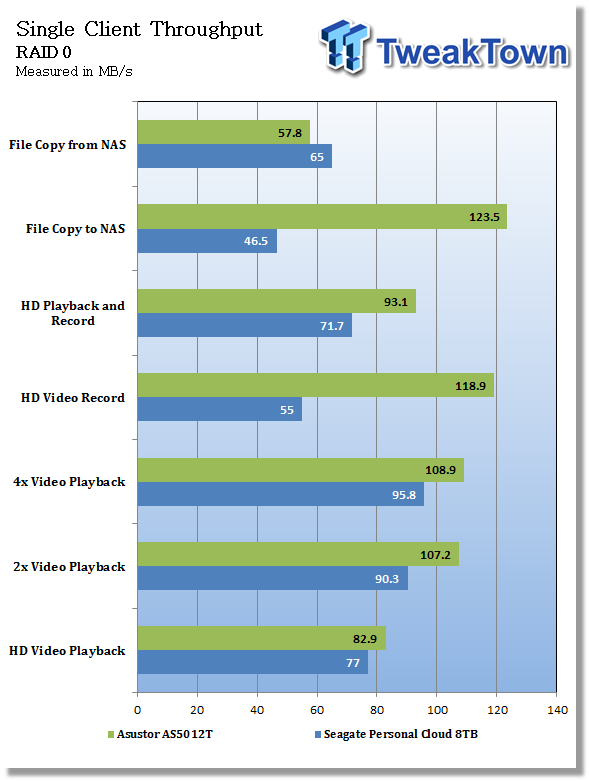 Beginning with our single client RAID 0 performance, the Asustor did quite well with file copy operations and video record. Following those, we have some pretty good numbers with 2x and 4x video playback. 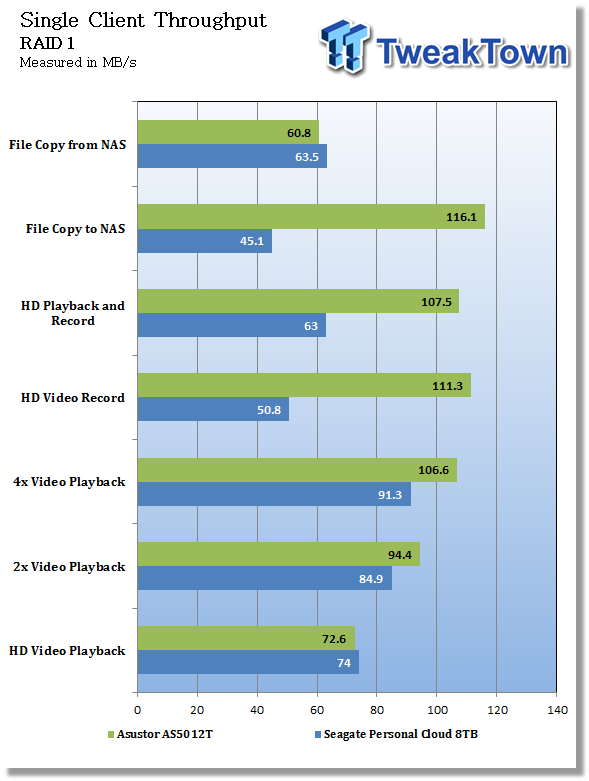 RAID 1 offered similar results in the video playback testing, with results coming in at 72, 94, and 106 MB/s respectively. Write operations touched 116 MB/s for file copy, and 111 MB/s for video record. 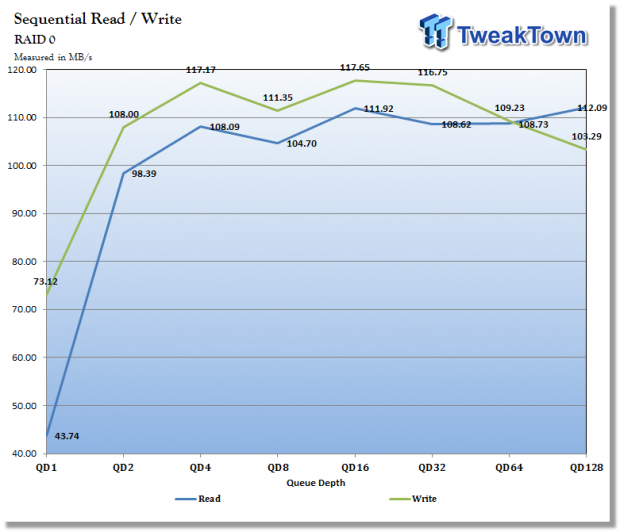 Our first set of results show how much better the NAS does with write operations. As you can see, we have a peak of 112 MB/s with read, and 117 MB/s write. 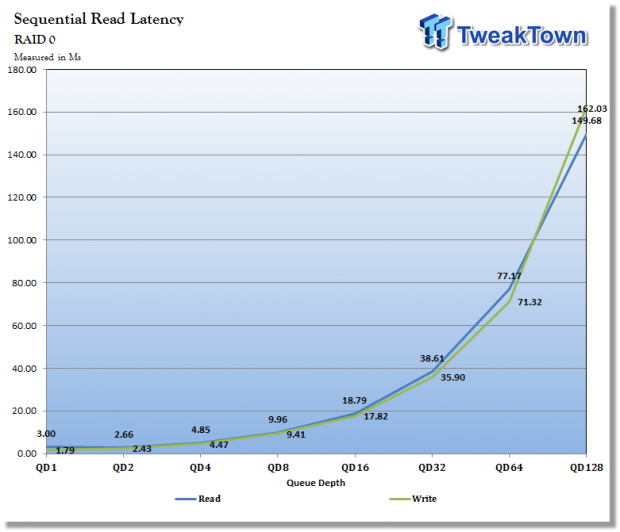 Latency results show both read and write being fairly close until QD32 where they start to drift apart increasingly. At the end, read latency was 13ms quicker. 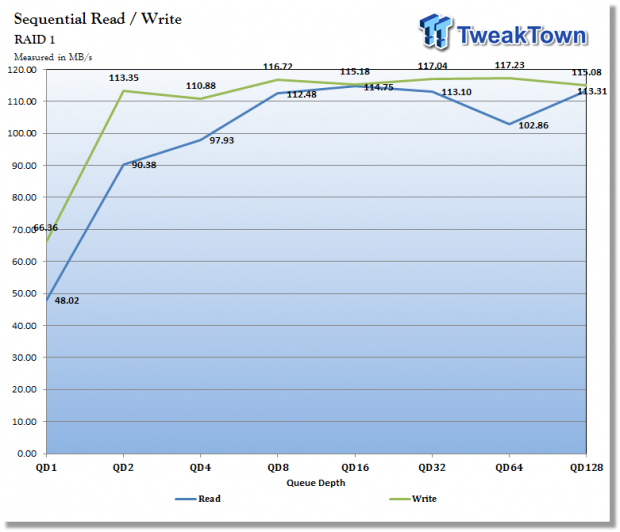 Switching our array to RAID 1 performance didn't appear to change much. Read operations were steady through QD32, peaking at 114 MB/s. Write topped 117 MB/s. 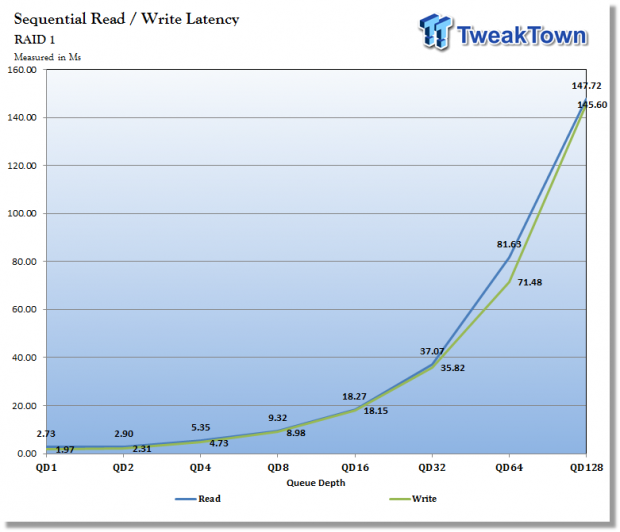 Latency for RAID 1 was more of the same; here we found the results stuck close together through QD16, but they started to drift apart around QD32. At the end of our testing, read and write latency were within 2ms of each other. 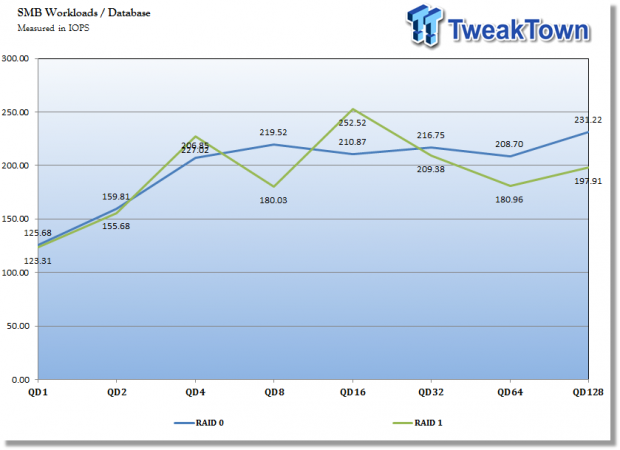 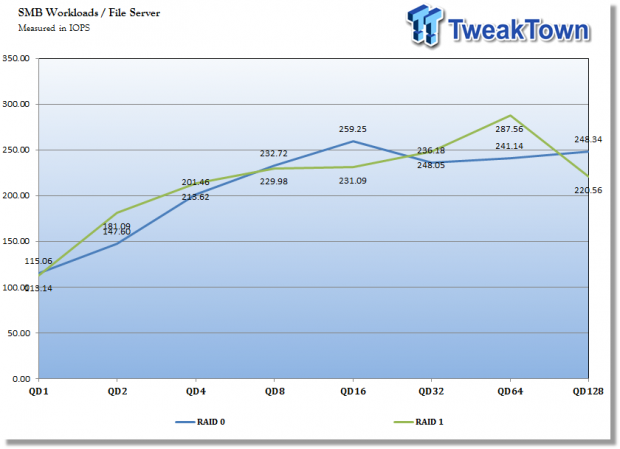 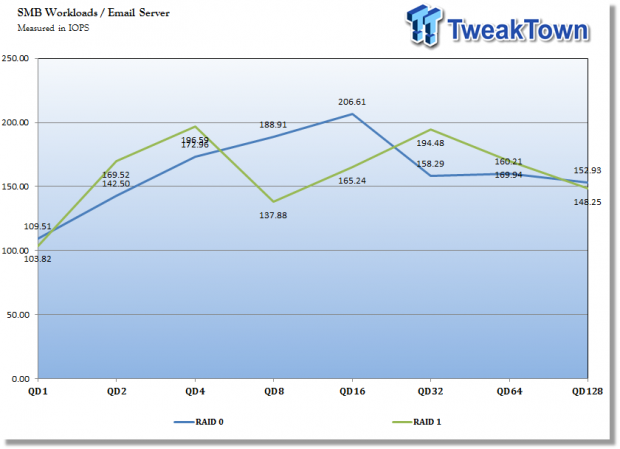 Moving on to Email Server, performance dropped slightly with RAID 0 coming in at 206 IOPs at QD16, and RAID 1 just touching 196 IOPs at QD4. 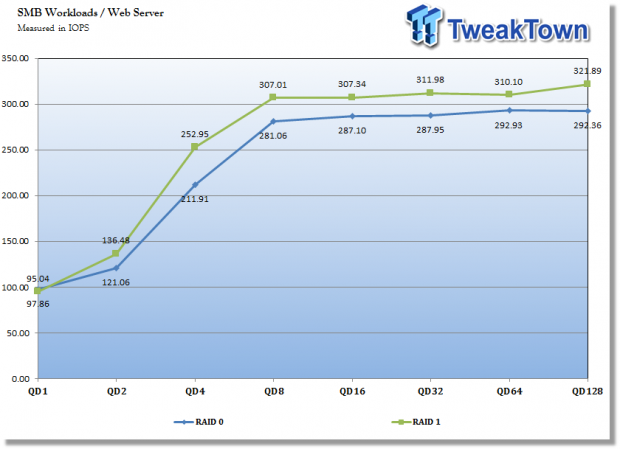 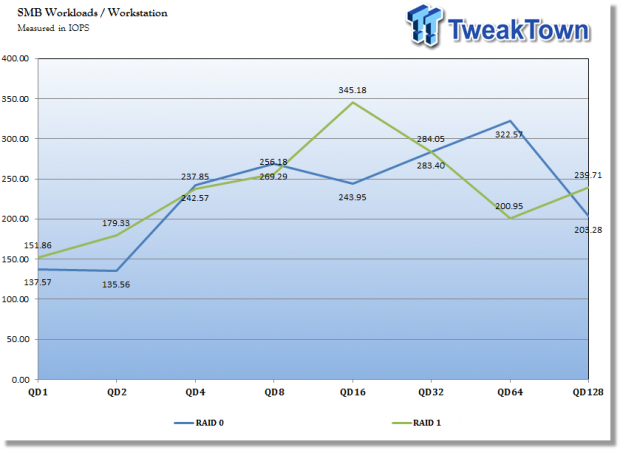 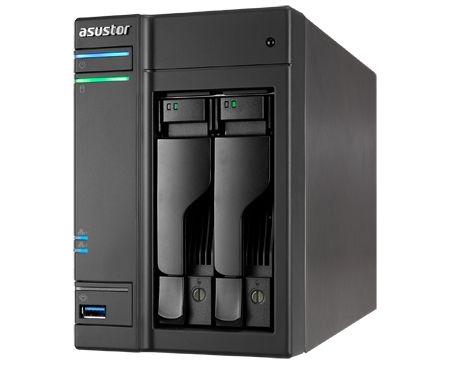 With NAS appliances evolving from niche storage solutions to full on media centers, we have watched as vendors have increasingly offered more powerful solutions to keep up with consumer demands. What started many years ago as a simple HDMI port on the back of a Thecus N2800 has now evolved into many appliances with media center capabilities; the same can be said of this latest offering from Asustor utilizing XBMC.

Build quality of the AS5102T is quite good. This solution uses a steel frame and surrounding enclosure to give an industrial feel and appearance to the unit. At the same time, the front bezel uses plastics and soft glow LEDs for a modern appeal. Overall, the unit is very sturdy, and fairly heavy once drives are installed. The drive tray latches are some of the best I have seen, and they compare only to the Netgear ReadyNAS in terms of quality.

ADM has come quite a long way since I first used it a few years ago. Asustor has certainly devoted a lot of time into smoothing things out, and they have really been able to keep up with solutions from competing vendors. A few unique features like Dr. Asustor really add to the experience, and could potentially be a life saver for the typical consumer if something were to go wrong with their NAS system. Additionally, the app store has really grown since the last time I had my hands on an Asustor appliance. Consumers now have access to many popular applications like Chrome, Plex, and XBMC, to name a few.

The performance of this appliance was superb, and I can't really remember the last time we had such a high performance solution in the two bay form factor. Peak read performance obtained in RAID 0 landed at 112 MB/s, and write performance was nearly the same at 116 MB/s. Workloads presented little challenge to the 5102T, as the J1900 Celeron was able to produce some rather impressive numbers with peak IOPS ranging anywhere from 196 IOPs in Email Server to 345 IOPS in Workstation.

Overall, the Asustor AS5102T is a solid appliance that offers the performance for multi-user environments, and functionality the typical consumer would want.

PRICING: You can find the Asustor AS5102T for sale below. The prices listed are valid at the time of writing, but can change at any time. Click the link to see the very latest pricing for the best deal.

The Bottom Line: Asustor's AS5102T NAS is a solid performer while carrying one of the best price points in the two bay NAS segment.