ViewSonic won't reach gamers with the LightStream PJD5255, but for small business or office users, this could be the one. Great features, a remote, and 1024x768 resolution mixed with portability means ViewSonic has a winner here.

Many years ago, I had a projector setup in my lounge room, but back then even a mid-range projector cost north of $2000. I settled on a Sony projector that was capable of outputting 720p back when the Xbox 360 launched, and spent close to $5000 on a projector and pull-down screen. It was quite the setup back in the day, before LCD TVs really took off, and have now completely bottomed out in price.

ViewSonic reached out to me to see if I would like to review one of their projectors, I agreed and that's how we're here today. ViewSonic actually do a number of projectors, which range from smaller, more portable units like the one we have here today with the PJD5255, right up to professional units that pump out Full HD, or 1920x1080.

In their XGA-capable range, ViewSonic has an impressive 13 different products to handle all corners of the market. The company also splits these projectors into their respective markets: entertainment, business, LightStream, government, education, and LED.

The ViewSonic LightStream PJD5255, as the company explains it, is a "price-performance projector features 3300 lumens, native XGA 1024x768 resolution, and intuitive, user-friendly design". The last bit is definitely true, with some very easy-to-use functionality, which we'll get into soon.

The PJD5255 features HDMI input, two VGA, composite video, S-video, one VGA output, audio in/out, mini USB and RS232. ViewSonic ensures that you'll have your device, laptop, or PC hooked up to the PJD5255 without a problem.

ViewSonic is aiming the PJD5255 projector to the education and small business environments, so this isn't a full-fledged home theater projector by any means. When it comes to price, the ViewSonic LightStream PJD5255 can be found on Amazon for $427.99 at the time of writing. 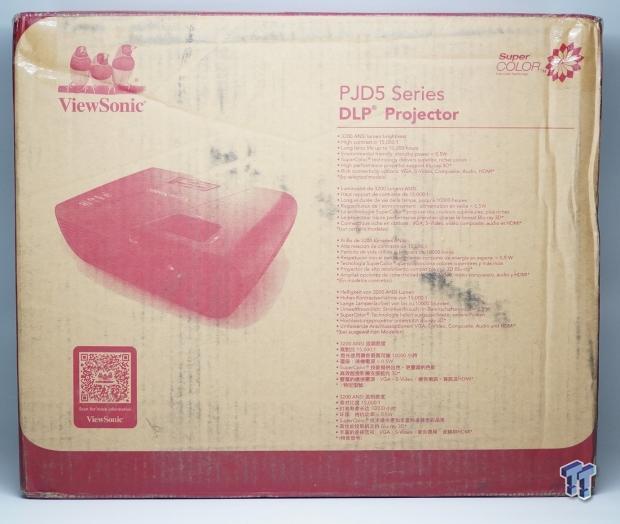 Starting with the box, we have the plain packaging for the projector, as you can see.

Out of the box, we have the LightStream PJD5255 projector. From the front, we have some ViewSonic branding up the top with the triple-bird logo in plain sight. 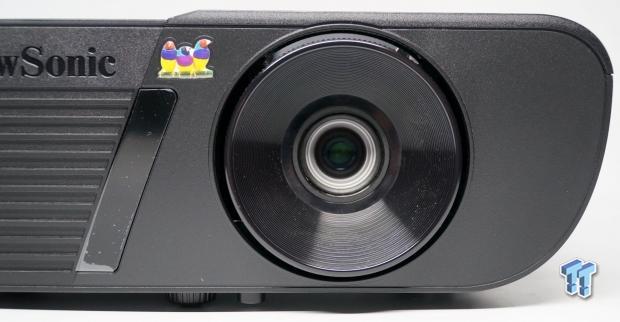 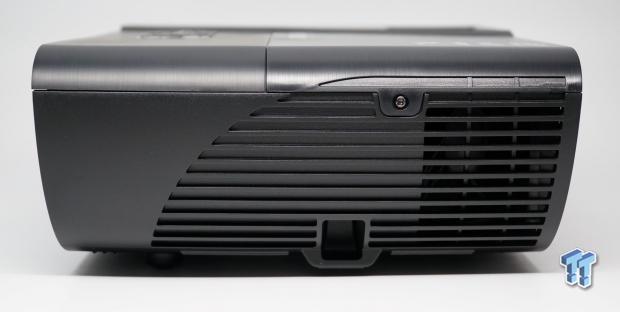 On the sides of the LightStream PJD5255, we have lots of venting to keep it nice and cool under operation.

On the rear of the LightStream PJD5255 we have all of our connectivity. Starting from the left, we have 3.5mm audio in, S-video, composite video, HDMI, two VGA inputs, one VGA out, mini USB and RS-232. To the bottom left, we have the power port. 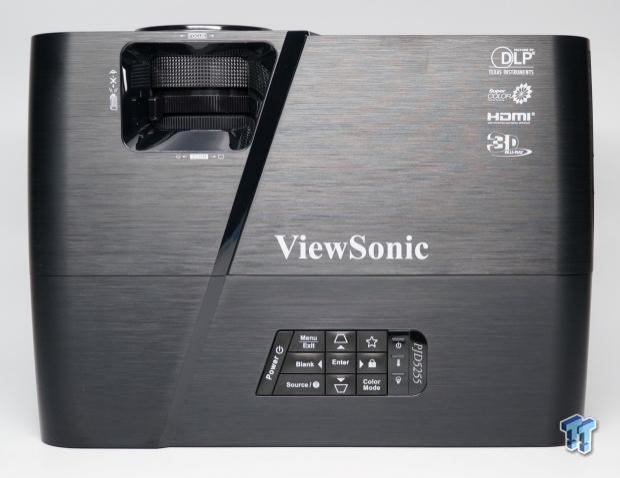 From the top, starting with the top left, we have our lens that we can adjust the throw distance with the zoom, and the focus ring. We can see ViewSonic branding smack bang in the middle, and some controls in the bottom right. 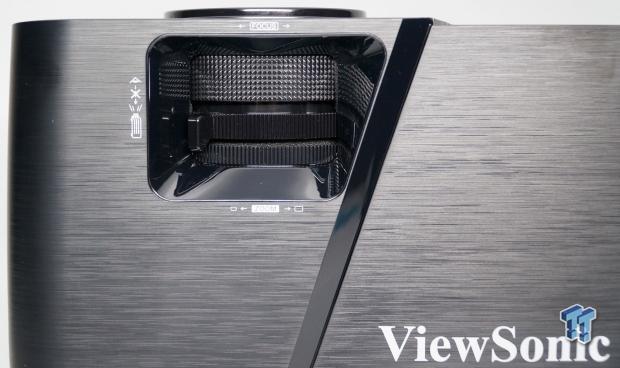 A closer look at the lens, focus and zoom. 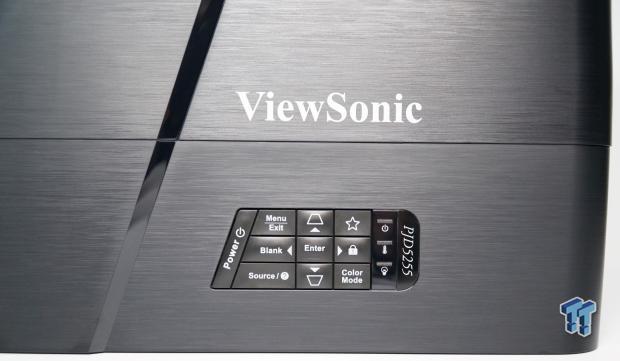 Here we have a closer look at the controls, which is a nice touch for business and education users as they have direct, and very easy access to the controls of the projector - but there's a remote that you can use, too. 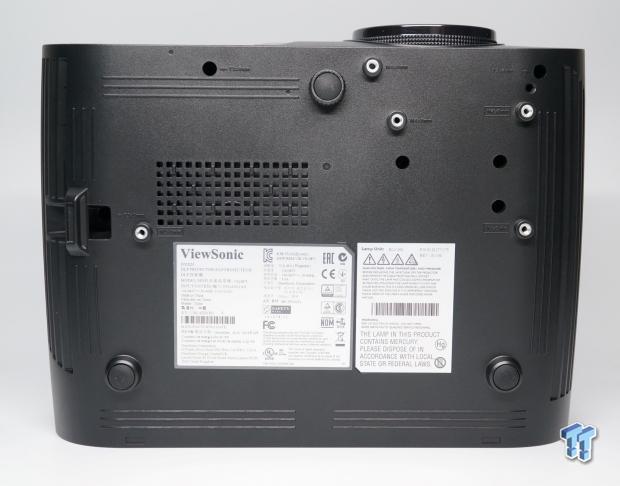 On the bottom, we have some mounts that can be used and some details and regulations that the LightStream PJD5255 has passed. There's also the warning that the lamp in the product contains mercury, so please be careful when taking out and replacing the lamp. 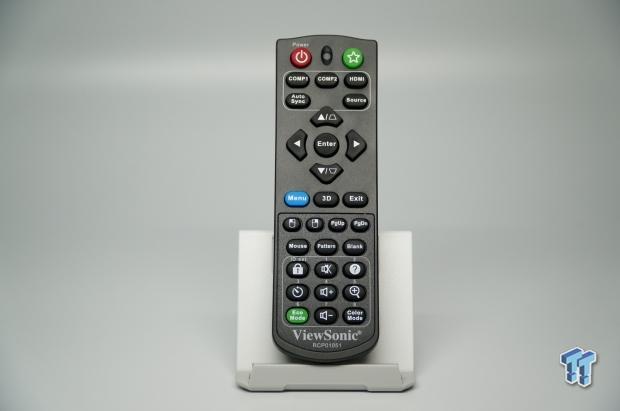 ViewSonic has opted to provide consumers with a remote, which is a nice touch. Even though there's controls on the projector itself, a remote makes things much easier to control the projector with from a distance.

I used the LightStream PJD5255 Projector in my office (which is rather large) where it sat on my desk next to my monitors, blasting onto the wall in front of me. The wall is around 10 feet away, so the image on the wall was quite large, but not as large as I wanted.

Moving the projector to the other side of my office and blasting it onto a wall around 20 feet away, and the image was double the size - much better!

When it was blasting on the wall, I adjusted the refresh rate to 100Hz, which resulted in a far smoother experience. Once you start using high refresh monitors, you can't go back, so the use of a projector that is capable of 100Hz is nothing short of impressive. Sure, the resolution will let you down, but this isn't geared towards gamers.

But, that didn't stop me from playing Battlefield 4 on the ViewSonic projector. At 1024x768, my NVIDIA GeForce GTX Titan X video card had no issue playing at Ultra detail at 100FPS minimum, which is exactly what I did. The ViewSonic LightStream PJD5255 handled it like a champion, with super bright images and silky smooth performance.

For data or office use, the PJD5255 is great. This is the market ViewSonic is aiming for, so I used it as a third monitor for a week with great results. I had the PJD5255 projecting above my monitors, and against the wall, so I had the main page of TweakTown on the wall at all times and browsed Reddit throughout the day.

When I was bored, I would play some TV episodes or movies through Netflix, so I got some great use out of the projector. I had nothing but a smile on my face while watching and reading content on my wall. My daughter would walk into the room in amazement that the image was "so big" that she could "watch YouTube videos all day" on it.

Portable & Powerful: The ViewSonic LightStream PJD5255 projector is portable enough that you could carry it with you to a meeting, or over to a friend's house for some big-screen action. It's also packing quite a punch with its vibrant colors and brightness, so you're not losing out in that department.

Great Quality: Reading content like webpages or Word documents, or even the occasional movie or TV episode through Netflix is great on the ViewSonic projector. You could easily have this double as a projector in your lounge room or office without an issue.

Competitively Priced: At under $450, it is priced at a point that makes having a projector in the office or small business worthwhile.

Limited By Its Resolution: With just 1024x768, this isn't going to be your next Home Theater or gaming purchase. But, it makes up for it somewhat with its 100Hz refresh rate.

There's not much wrong with the ViewSonic LightStream PJD5255, as we've reviewed it from the perspective of a small business or office, which is what ViewSonic is aiming for. This doesn't mean we didn't have some fun with it and played games on it, which it handled quite well.

In an office environment, the projector lived up to what I expected from ViewSonic. It's portable enough to take around an office or small business, and powerful enough to project an 80-inch or bigger image onto a wall or screen. ViewSonic has also designed it well, with all of the buttons you need to control the LightStream PJD5255 right there for your convenience on top of the projector.

The Bottom Line: ViewSonic won't reach gamers with the LightStream PJD5255, but for small business or office users, this could be the one. Great features, a remote, and 1024x768 resolution mixed with portability means ViewSonic has a winner here.