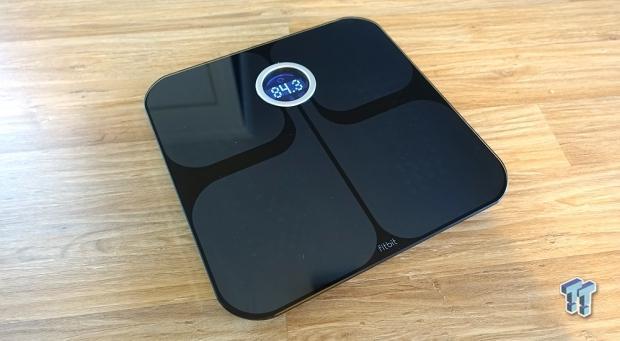 If you had told me a few months ago that I'd be in the daily habit of weighing myself, working out at the gym 4 to 5 times a week, watching my meal closely and pleased that a wristband reporting the that I've walked 10,000 steps that day - I'd have straight up called you crazy. But, such is the draw and appeal of the Fitbit ecosystem since my review of the company's latest activity tracker last month, I've assessed many areas of my day-to-day fitness and made some solid attempts at some healthy substitutions. During that time, I'm happy to report that I've lost a good 7 kilograms (a reduction of almost 30% of my total body fat) and feeling all the better for it. All this from an innocuous, sub-$200 wristband. It's fair to say I'm a believer - and now many of family and friends are too.

But let's go back a bit. In 2012, when the company was still in relative infancy, Fitbit released a Wi-Fi smart scale to complement their core activity tracking device range. Three years ago might be a millennia in tech years, but the Fitbit Aria is now more relevant than ever before, with the company continuing to evolve the device via firmware and software updates and integrating it tightly to their growing range of tracking devices such as the top tier Charge HR and Surge wristbands.

The Fitbit Aria is a fairly non-descript device which looks not too dissimilar from your ordinary everyday bathroom scale - with the exterior doing little to hint at its technologically proficient innards. Still, Fitbit has obviously worked hard to make the Aria something that you aren't ashamed to leave in full view in your bathroom, with a swish contemporary design constructed from a high sheen glass. The underside features four rows and columns of bubbles and four squishy plastic feet which prevent sliding. With no panels, buttons or inputs on the front of the unit, the only output is a rounded backlit LCD panel embedded in a silver ring, which provides key values such as weight and body fat percentage, along with confirmation of data upload to your cloud Fitbit account. 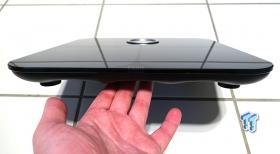 Setting up the unit is relatively easy, with two choices - either via the PC app or via a mobile device app. I found the latter to be much simpler and the connection to my hotspot was made within minutes. The unit requires four AA batteries, which I've yet to replace in nearly eight weeks of use.

Operating the Aria is no more difficult than any other weight scale, although to get the full value, you'll also need to remove your shoes, which allows the unit to send a small electrical signal through your frame to measure your muscle lean mass and fat tissue, which is almost instantaneous. The user manual makes it clear that this function should not be used if you have a pacemaker installed. If this applies to you, I'd be taking their advice. Once your measurement is complete, users should avoid storing the unit in an upright position, otherwise it will throw off the unit's measurements and require a number of recalibrations before giving resuming accurate readings. 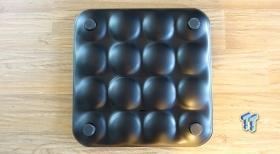 Once upload is complete, the real value of the Aria comes into full view. If you own a Fitbit activity tracker (or taken a look at my Fitbit Charge HR review), you'd likely know how strong the Fitbit dashboard is - a pleasant and fully adjustable tile based user interface that makes accessing the vast range of metrics a real joy. The mobile app is almost as impressive (and in my experience, flawless), but doesn't have quite the same level of options. Either way, the Aria integrates into the system flawlessly, giving a new level of relevance to the data gleaned from the activity trackers and merging it with a new layer of weight data.

The software keeps a log of your weight over time, and with the aforementioned electrical charge, gives relatively accurate feedback on your levels of muscle and body fat and also your BMI (Body Mass Index). Bodybuilders and elite athletes with significant muscle development can probably ignore the BMI, as it will dishearteningly claim you are overweight (not a complaint levelled at Fitbit, but the accuracy of the BMI equation), but even so, the muscular breakdown should be spot on. 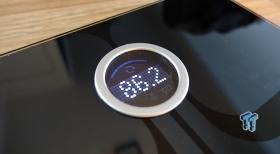 Users can also elect to set themselves a weight loss goal, which will produce a percentage readout of how you are progressing towards achieve that goal. It's not only effective, but a huge boost to your confidence as that figure gets higher and higher - or if it's going the wrong way, to get back to the aim. And that's the benefit of the Fitbit ecosystem - it really does encourage you to constantly be better; to walk further, perform faster and watch what you put into your body. It doesn't browbeat you, but it does give you hugely positive feedback and encouragement as you set about achieving your set goals. 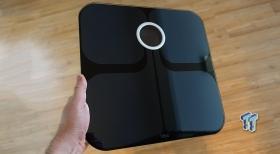 Like I said in the outset - not only did I never anticipate the personal need for an activity tracker and certainly not a Wi-Fi scale, but now I couldn't imagine not having them as part of my lifestyle fitness regime. I'm looking forward to what the company pulls out of the bag next.

The Bottom Line: The Fitbit Aria is not only a very worthwhile addition to the Fitbit range, but something that all Fitbit owners should consider owning to assist in achieving their health goals.