Nearly a year and a half ago, I had the chance to take a look at the 2TB Desktop SSHD. Like all standard SSHDs, the Seagate solution takes the massive capacity of a mechanical hard drive and adds NAND flash to it, allowing the drive to use a proprietary caching algorithm to speed up frequently used applications.

The Seagate Desktop SSHD has been on the market for a number of years now and as we mentioned in the original 2TB Desktop SSHD review, it wasn't long after that the 4TB variant was launched as expected. Setting this drive apart from the original 1 and 2TB solutions most notably is the spindle speed, as the original drives used a healthy 7200 RPM approach. The 4TB solution in the lab now is based upon the standard Desktop HDD and utilizes a 5900 RPM spindle speed. 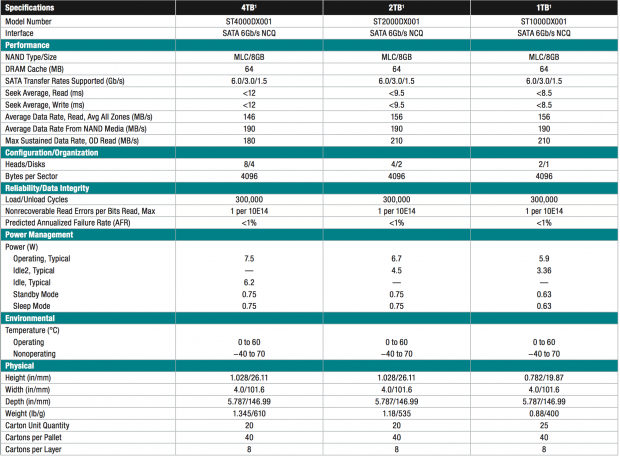 Above, we have the drives specifications pulled from the Seagate website. Starting form the top, we find the SATA 6Gb/s interface for the drive. Like the previous solutions, this 4TB drive uses the same 8GB of MLC NAND along with a 64MB drive cache. Average seek for read and write is listed as less than 12ms, while the average data rate comes in at 146 MB/s over the platters and increases to 190 MB/s when reading from the NAND.

The 4TB Desktop SSHD is manufactured with four platters encompassing eight heads with a load/unload cycle rating of 300,000. Power consumption of the drive is set at 7.5 watts operating, with idle hovering around 6.2 watts. Sleep and standby power are both set at 0.75 watts.

The MSRP of the Seagate Desktop SSHD in the 4TB capacity is set at $239.99 with a three-year warranty.

PRICING: You can find the Seagate 4TB SSHD SATA 6Gb/s 64MB Cache 3.5-Inch Internal Bare Drive (ST4000DX001) for sale below. The prices listed are valid at the time of writing, but can change at any time. Click the link to see the very latest pricing for the best deal. 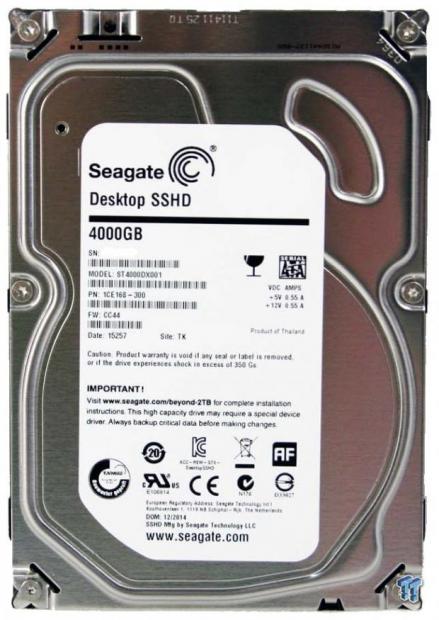 The Desktop SSHD is quite familiar in appearance to the rest of Seagate's lineup. The top line of the drives sticker denotes the model with capacity listed underneath. Into the finer details, you will find serial number, model number and firmware revision. 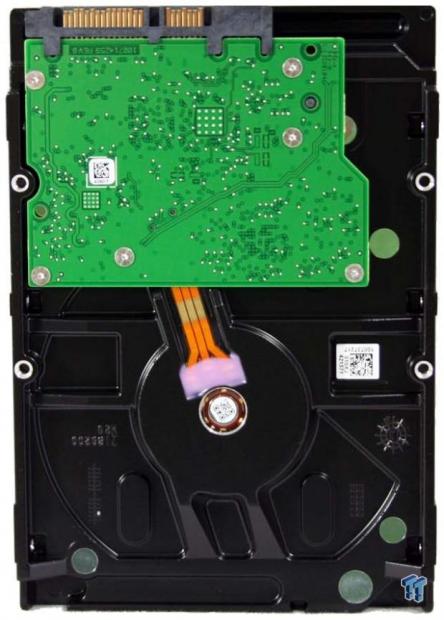 The back of the drive houses the green PCB, similar to what we found on the 2TB variant.

The drive's SATA power and data connectors are lined up correctly, so there will be no issues with hot swap trays. 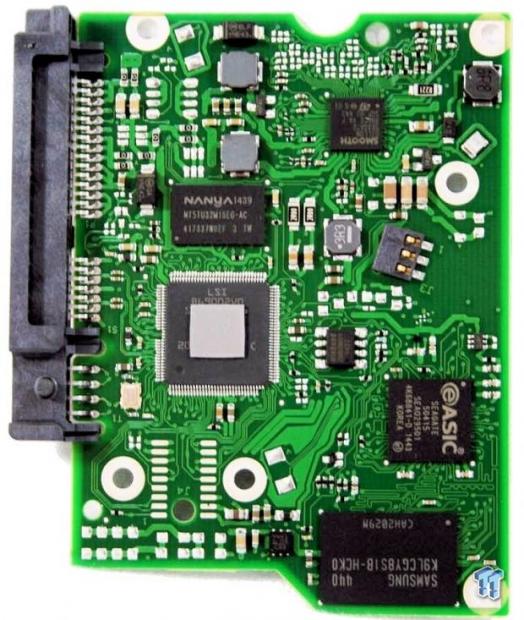 The PCB houses the LSI drive controller in the center of the PCB with the 64MB of cache next to it. The eASIC FSP sits next to 8GB of Samsung NAND flash. 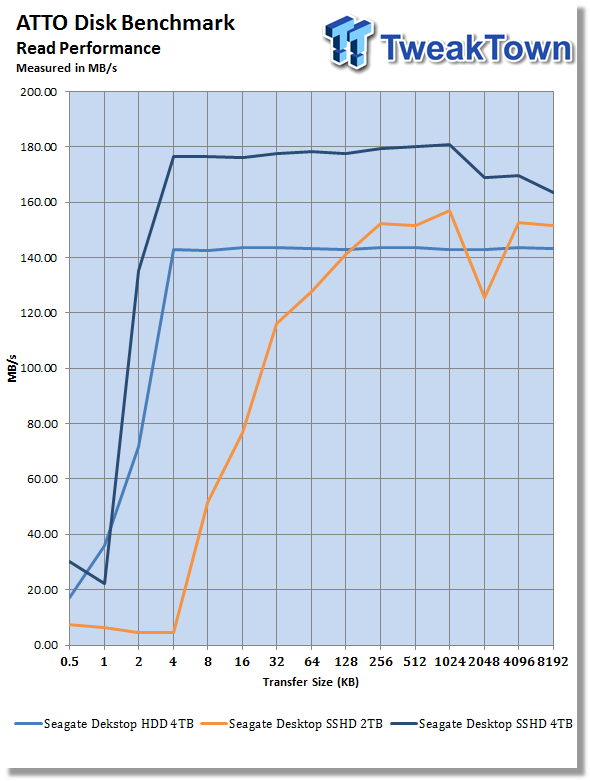 ATTO testing found the 4TB SSHD to be the quickest of the three tested. Next to the 2TB SSHD, the 4TB variant ramps up to maximum performance much, quicker reaching 178 MB/s. 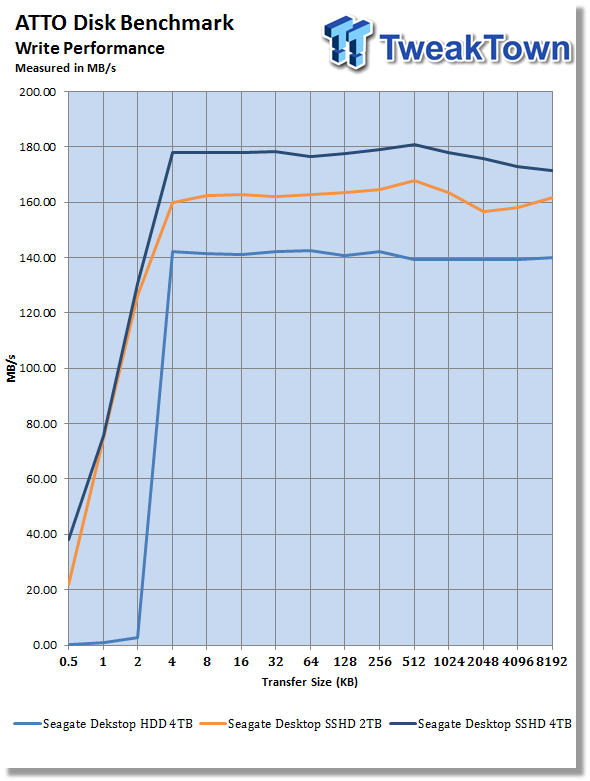 Write performance shows a similar pattern between the 2TB and 4TB SSHDs, each of these drives ramp up to maximum throughput very quickly and then level off between 160 and 180 MB/s. 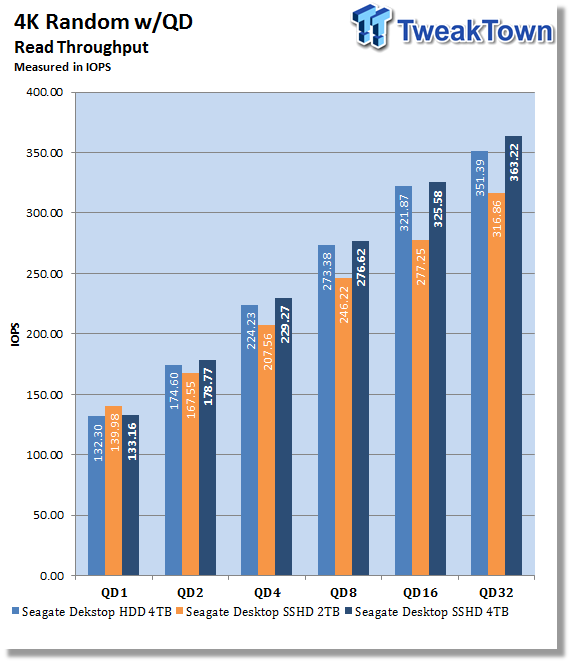 Starting off with 4K random read, we found the 4TB SSHD scaling quite well with a peak of 363 IOPS at QD32. 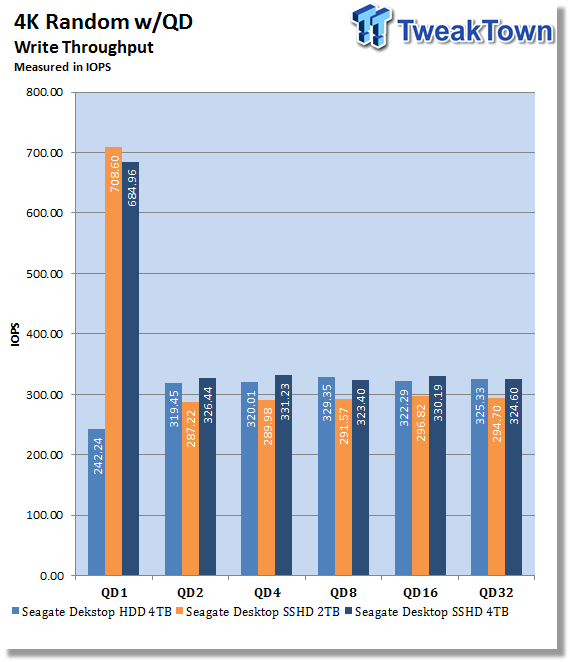 Write throughput showed of the caching of the drive. As you can see, both the 2TB and 4TB capacities started off testing with a burst of performance, then settled down and scaled linearly through QD32. 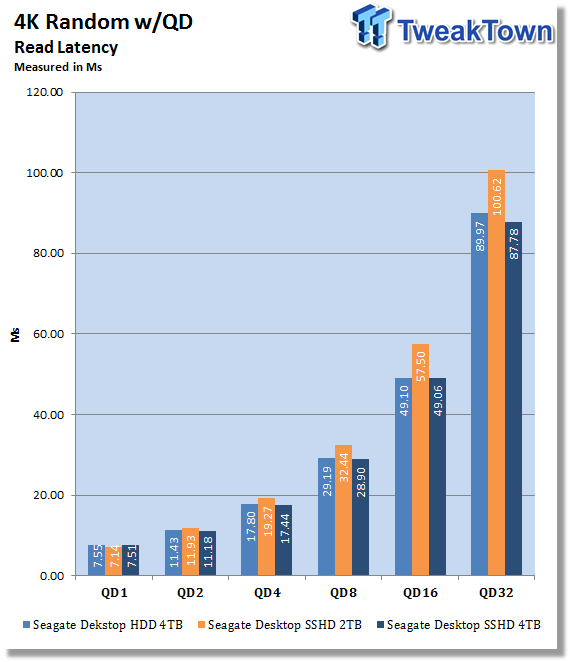 Read latency for the 4TB SSHD was really similar to the standard HDD and lower than the 2TB SSHD variant. 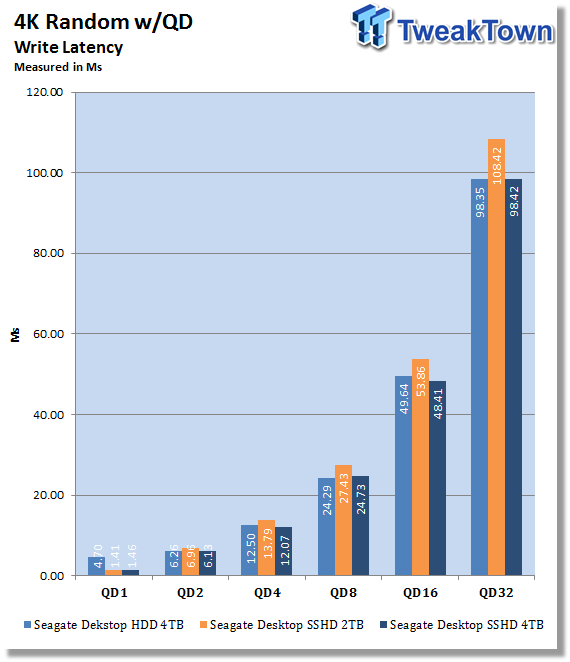 Random write latency showed each of the three drives scaling quite well. The 4TB SSHD seems to distance itself around QD8 and continues the trend through QD32. 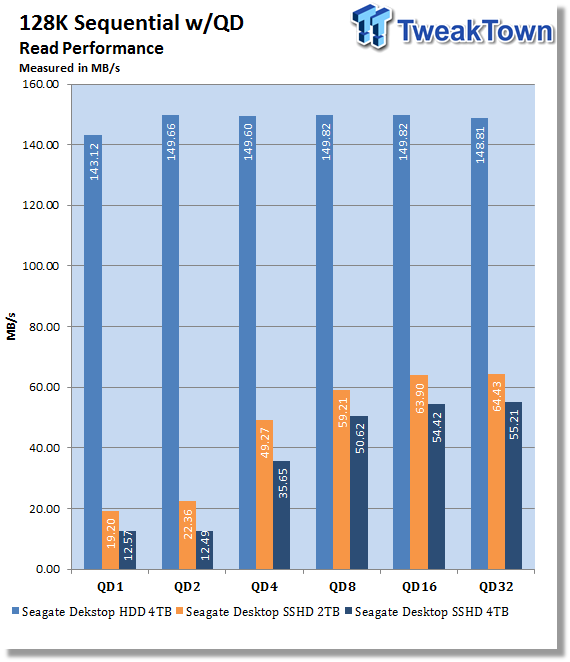 Moving on, we tested the sequential performance of the 4TB SSHD. As you can see here, both of the SSHD solutions seemed to lose performance with initial sequential testing. The standard hard drive continued through testing unaffected. 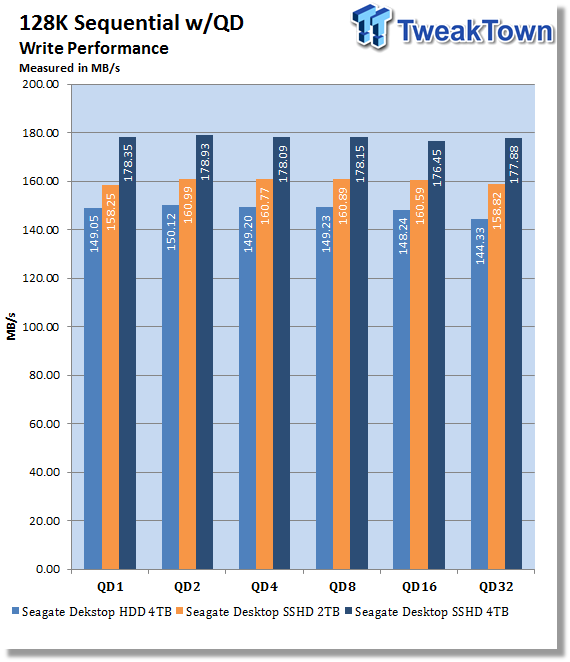 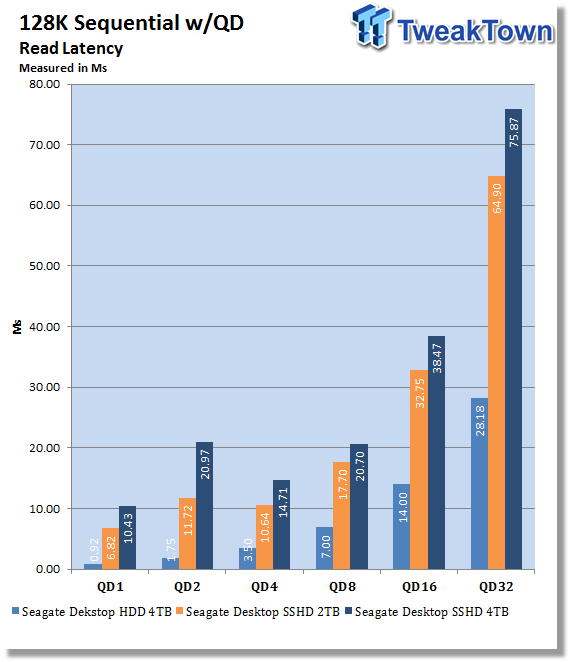 Read latency for sequential testing showed up nearly three times higher than the standard mechanical solution. This is most likely due to overhead in the caching algorithm. 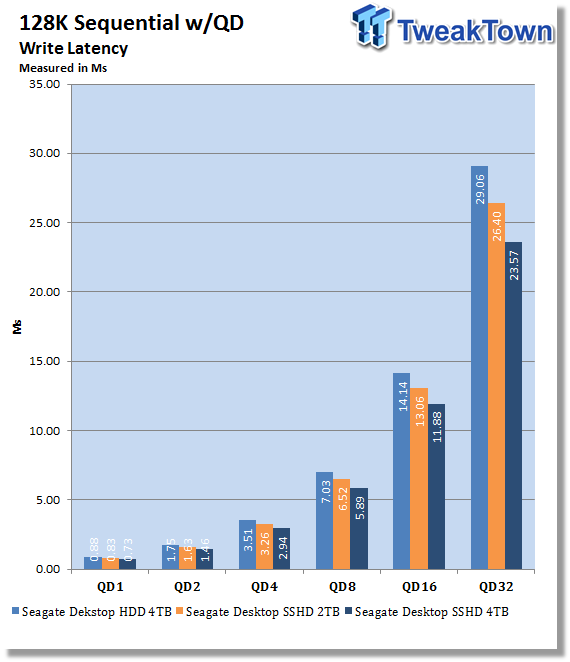 Write latency had each drive on par with one another through QD8, where the 4TB SSHD starts to distance itself. 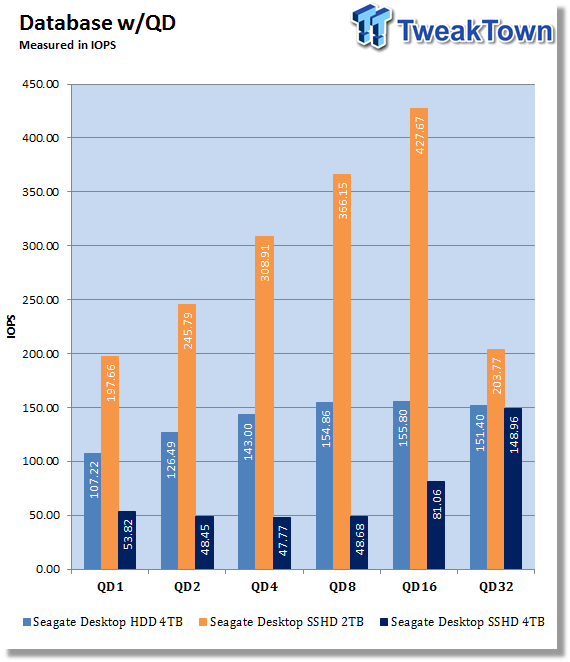 Moving on to our workload testing, we start with Database. As you can see here, the 2TB solution topped the charts, while the 4TB drive had some issue from QD1 to QD8, then caught up and started the scale quite well. Peak numbers reached 148 IOPS. 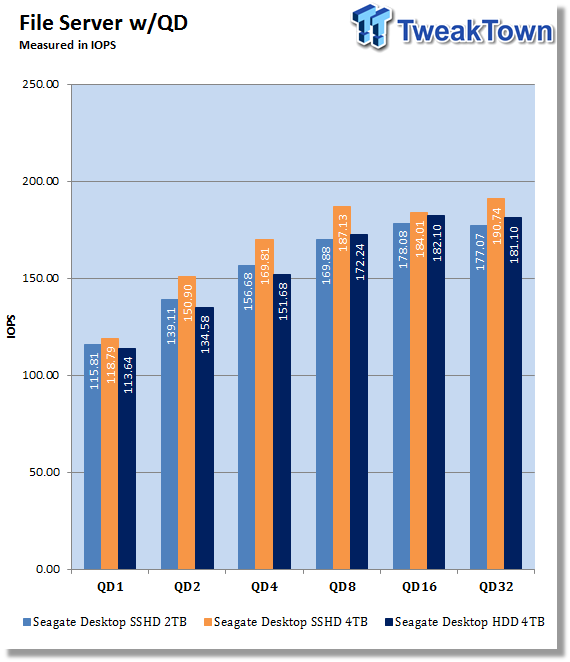 File Server showed all three solutions scaling quite well. As you can see, the 4TB solution topped out at 181 IOPS, just 10 shy of the 2TB solution. 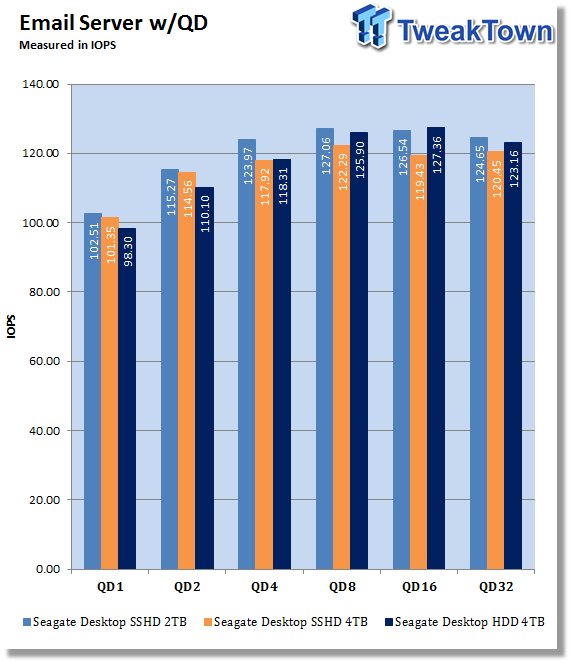 Email server is the first workload where we find the 4TB solution topping the performance of the 2TB SSHD. All drives scaled quite well, but the 4TB drive seemed to take off around QD8, reaching a peak of 127 IOPS. 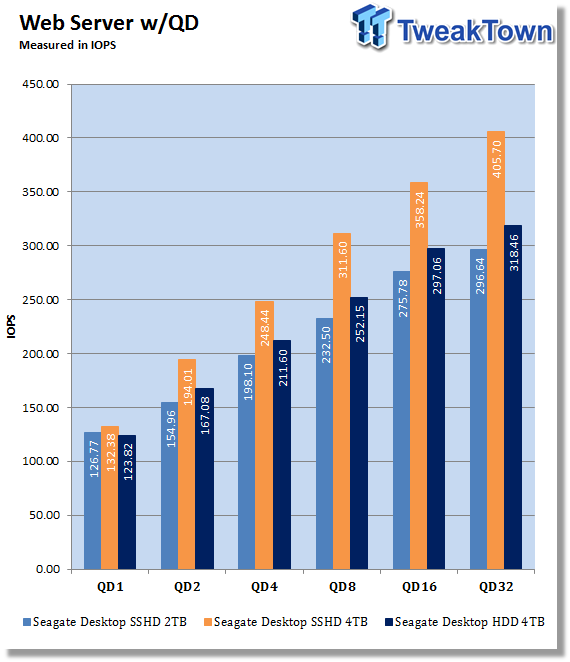 Web Server was a rocky place for the 4TB SSHD. The 2TB solution seemed to push through reaching 405 IOPS, while the 4TB did come in above the standard HDD at 318 IOPS. 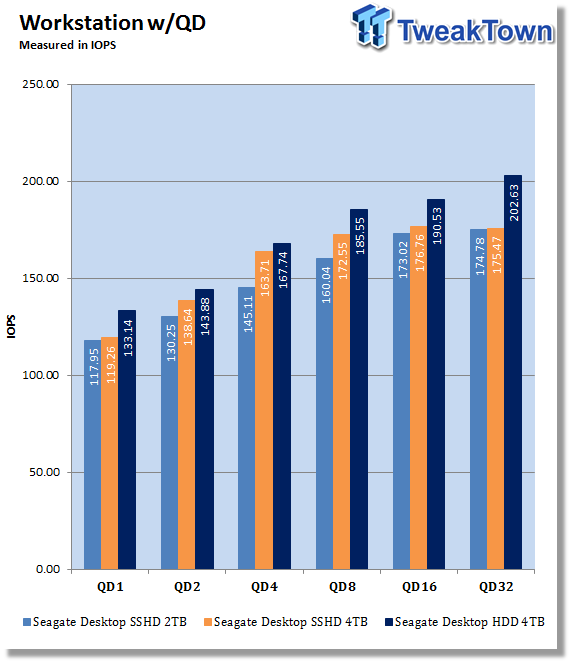 Workstation allowed the 4TB solution to take top honors as it reach 202 IOPS at QD32, while the 2TB drive managed just 175 IOPS. 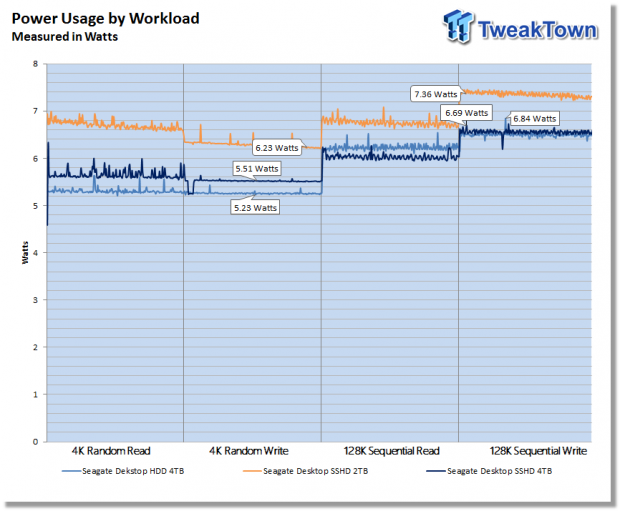 Looking at our consumer workload, the 4TB SSHD carried a low-end power consumption of 5.5 watts, while peaking at 6.8 watts. This is on par with the Desktop HDD within sequential loads, and just 0.3 ways higher during random workloads. The 2TB SSHD uses much more power due to its spindle speed being quicker.

SSDs have reached their peak in popularity, with nearly every system now shipping or being built with them. Mechanical hard drives still hold the position of capacity, and while SSDs attempt to close this gap with emerging technologies like TLC and 3D NAND, drives like the SSHD from Seagate offer a bridge between high capacity and high performance solutions.

In testing, we found the 4TB SSHD to scale quite well in random read operations, while random write carried a burst of performance followed by linear results around 330 IOPS. Sequential read performance was a bit of a misnomer for both the 2TB and 4TB SSHDs as it reached only 55 MB/s. Write performance on the other hand was chart topping at 177 MB/s, beating out the 2TB solution by 20 MB/s.

Workload testing was up and down for the 4TB SSHD, as the database workload presented a challenge for the SSHD. However, throughout the rest of workload testing, the 4TB SSHD was at the top of the charts and cemented itself as a great workstation solution reaching 202 IOPS at QD32. Power testing revealed the 4TB SSHD used a just a touch more power than the standard solution in random read and write, while sequential workloads had each of the drives within 0.14 watt of each other.

PRICING: You can find the Seagate 4TB SSHD SATA 6Gb/s 64MB Cache 3.5-Inch Internal Bare Drive (ST4000DX001) for sale below. The prices listed are valid at the time of writing, but can change at any time. Click the link to see the very latest pricing for the best deal.

The Bottom Line: The 4TB SSHD from Seagate is an excellent solution for those wanting capacity at a solid price point without sacrificing too much in terms of performance.