Seagate's hard disk drive division has seen a winning streak for the last several years. Capacity ramped up faster than the competition since the 8TB models came to market. Around the same time, the company took a bold step in the feature category by synchronized platter rotation to 7,200 RPMs across the NAS-optimized product line (starting with the 6TB IronWolf). A strong roadmap featuring dual independent actuator arms and even lasers mounted to heads that heat the platters prior to writing data show Seagate doesn't plan to slow innovation. Before we images of Austin Power's laser sharks dancing in our heads, we get to talk about the current product lines that just expanded capacities to 16TB. Seagate's three NAS-optimized series, IronWolf, IronWolf Pro, and Exos X now ship in the new capacity. Other than the label, the three series look identical and often times pricing is similar. Today we will look at what differentiates the three and then see each in action over in the native environment, over a network. There are many data points to go over in the specifications that explain why Seagate offers three NAS-optimized models. We will be starting with the IronWolf and IronWolf Pro from the Guardian Series of consumer and prosumer products.

The IronWolf design supports up to eight drive bay systems, and the IronWolf Pro supports up to twenty-four (recently upgraded from sixteen). The number has more to do with the amount of vibration from the disks in the NAS rather than performance. The more drives you add to the system, or even at the rack level, the more the drive has to compensate for the vibration. Our testing, today will show the optimizations are likely not what you think.

The 1TB to 4TB IronWolf models use 5,900-RPM platter rotation, but the 6TB and larger capacities shifted to 7,200 RPMs just like all capacities of the IronWolf Pros series. The IronWolf base model competes head to head with Western Digital's Red (base series) that still uses the 5,900-RPM spindle speed. The IronWolf Pro is the direct competitor to the Red Pro series with 7,200-RPM speed. The advantage becomes very clear in the user experience and performance.

There are other differences between the IronWolf and IronWolf Pro. The more consumer-focused IronWolf carries a 180-terabyte write rating per year, has an MTFB of 1 million hours and a shorter warranty that will we look at further down the page. The Pro model increases endurance to 300 terabytes per year, bumps the MTFB up to 1.2 million hours.

The Seagate Exos X is another animal altogether. This series comes from Seagate's enterprise product line designed for hyperscale and cloud datacenters. It ships in both SATA (6Gbps) and SAS (12Gbps) interfaces but expect to pay more for the SAS model. The series supports an unlimited number of drives in a system and is what you want to use when deploying racks of servers full of disks. The Exos X uses different firmware optimization to support the increased vibration, has industry-leading 550-terabyte endurance and a massive 2.5 million hour MTBF. Seagate doesn't publish every specification in public datasheets, so we had to pick and piece a chart together with the available data. On paper, the IronWolf Pro outperforms the base IronWolf series in sequential transfers with the difference being 40 MB/s. In previous reviews, we've found the base IronWolf often outperforms the IronWolf Pro in smaller deployments where the Pro's additional vibration optimization doesn't play as strong of a role. The Exos X leads the sequential performance category with up to 261 MB/s. This model is the only one of the three with published random performance with numbers reaching up to 170 IOPS read and 440 IOPS write. Neither IronWolf Series has published random performance data.

Things start to get jittery when it comes to pricing. We looked at Newegg and Amazon for pricing guidance. Newegg had the best prices at the time of writing. Normally we expect to see a cadence with IronWolf on the low-end, IronWolf Pro in the middle and Exos X at the top with the highest cost per drive. As you can see, that is not the case right now.

Newegg has both the IronWolf 16GB and IronWolf Pro 16TB at $499 right now. We usually see around a $100 difference during a new product launch between the new base and Pro IronWolf models. We rarely observe the Exos X pricing because the release cadence doesn't always come at the same time.

When you register your IronWolf or IronWolf Pro, you trigger Seagate's Rescue Data Recovery Service. This is a free feature for the IronWolf Pro series for two years and an optional add-on for IronWolf and Exos X. On the outside, all three series look identical other than the label so we won't bore you with repetitive pictures. You will notice there is very little room for the circuit board on the bottom of the drive. To reach 16TB, Seagate increased the number of platters inside the drive. The 16TB drives use nine conventional magnetic recording (CMR) platters. This pushes the need for slower shingle magnetic recording (SMR) back at least a generation. Starting with the 14TB capacity, Seagate started using a new chassis for the high-capacity drives that differs from the 10TB and 12TB models. The easiest way to spot the difference is the black paint on the bottom of the larger drives. The 10TB and 12TB used all silver enclosures.

We can get back to the lasers again. Seagate laser welds the two pieces together to form a perfect seal that ensures the Helium stays inside. 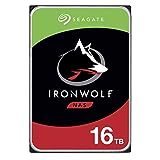