Overall the versatility that the SEEK Thermal XR's lens provides, the features the software has, and the periodic updates make this thermal camera one of the most useful little gadgets one could have in their arsenal. 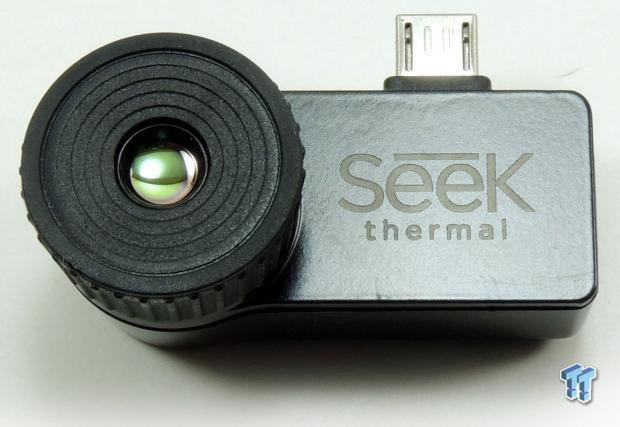 A few months ago, I reviewed Seek Thermal's first thermal camera for smartphones, and I was very impressed with its performance, especially at its low price. To be honest, I wanted the thermal camera to use in my reviews of computer hardware; the ability to see how products perform thermally is an invaluable capability. However, while the original Seek Thermal camera was very affordable, it left me wanting more for macro circuit shots. I ended up purchasing a marco-lens off EBay which worked great, but limited the camera to only take pictures from exactly three inches away.

When I was at CES, Seek Thermal invited me to see their newest product, the Seek Thermal XR, which had a lens capable of focusing, something I felt was missing from the original product. While there is an internal shutter (its audible) which helps refine the image, the ability to manually focus is one feature I was extremely excited to use. I have had the Seek Thermal XR for over a month now, I have taken over 600 pictures for reviews and recorded a few videos. Follow me as I tell you what I think about their new camera. 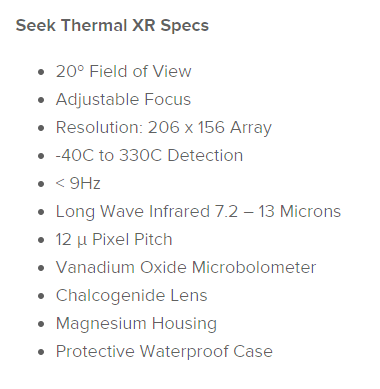 There are two versions of the Seek Thermal XR, one for Android and one for Apple phones, you will need to check their website to confirm your phone supports the camera as it requires your phone to provide power. The Seek Thermal and Seek Thermal XR are basically identical internally, they have the same specifications and they use the same application. The image metadata is also identical between the two cameras. 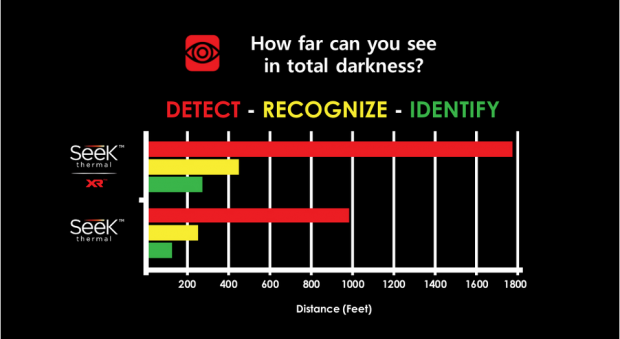 Here the manufacturer has provided the different ranges that each camera supports. By default, the Seek Thermal XR zooms in more than the Seek Thermal, which means if you want the same image, you need to take a few steps back with the XR model. Later on, I will compare images between the two.

PRICING: You can find the Seek Thermal XR Extended Range Thermal Imager, Android (UT-AAA) for sale below. The prices listed are valid at the time of writing, but can change at any time. Click the link to see the very latest pricing for the best deal.

A Closer Look at the Camera 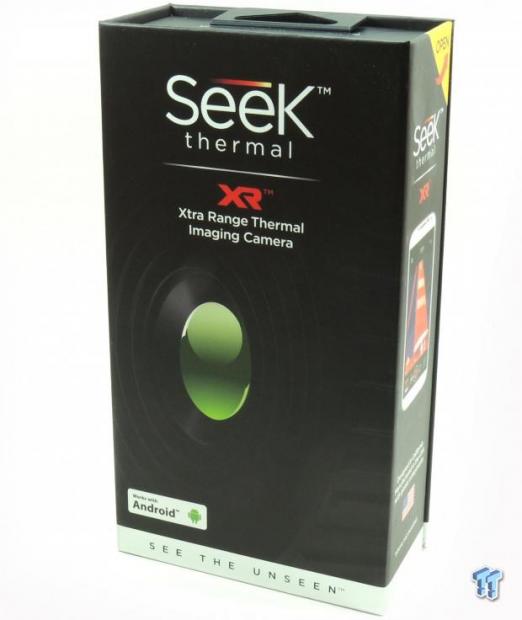 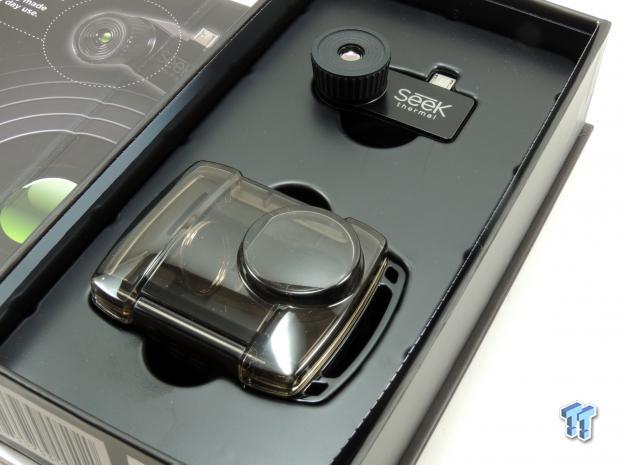 This sample came in the retail box with retail packaging. The camera is well supported and protected in a foam insert. 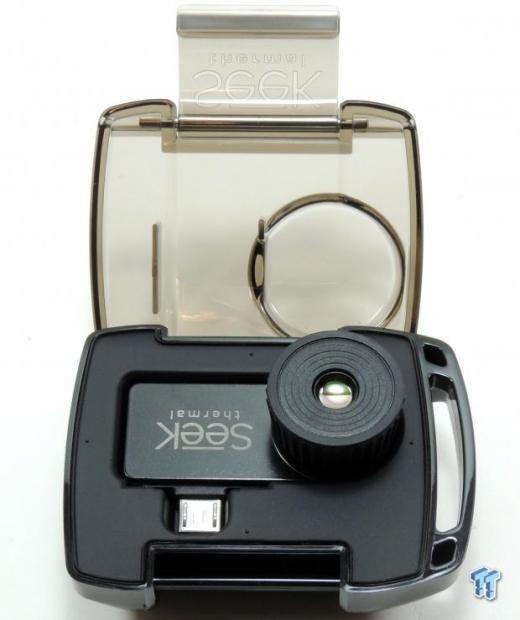 The waterproof case is custom fitted for the camera, and from experience, I can say it is extremely rugged. 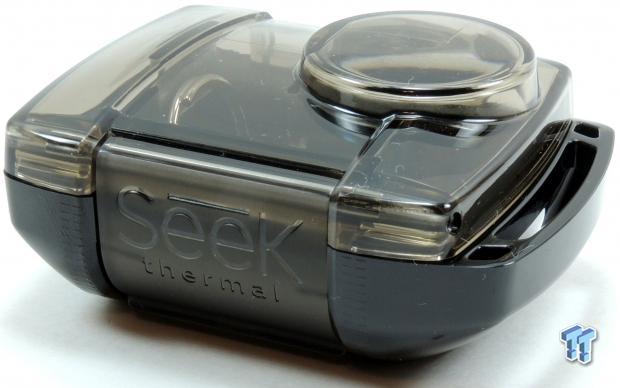 The cases for each model are custom made. 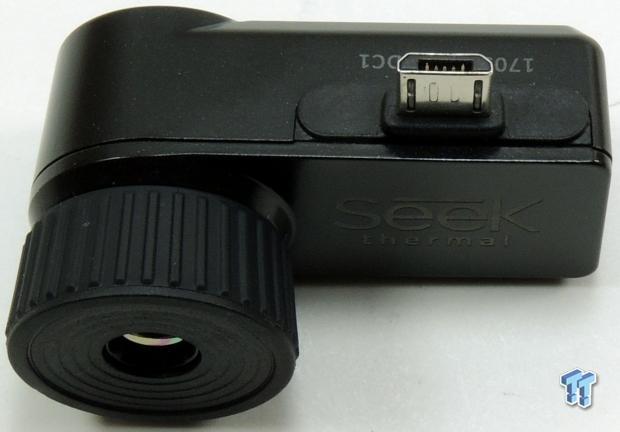 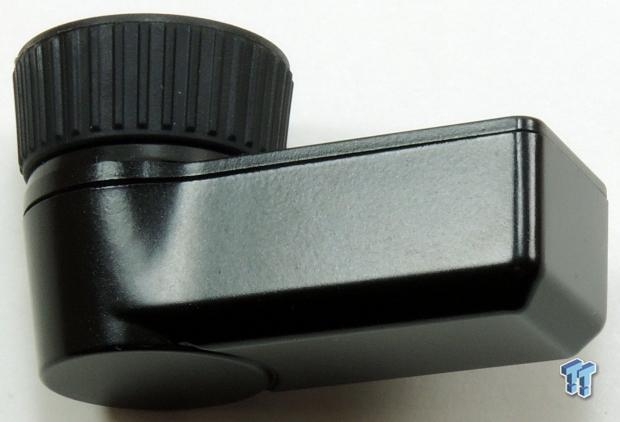 Here, I put both models side to side, you can see that the lens has a larger diameter and it's taller on the XR model. To focus the camera, you manually rotate the plastic around the lens. You should keep in mind that it is easier for you to mistakenly touch the lens, and if you do, you should try to clean it as the oils from your skin can damage the lens.

On the original camera, it is much harder to touch the lens, but on the XR, since the lens is bigger, you need to be more careful.

The camera is plug and play, when you plug it in the Seek application will launch automatically. The software is very simple to use, and periodic updates actually bring major improvements. I have never seen such improvements through software updates as I have seen with Seek's program. By keeping the internals the same, Seek is able to improve the image quality of all their cameras at the same time. 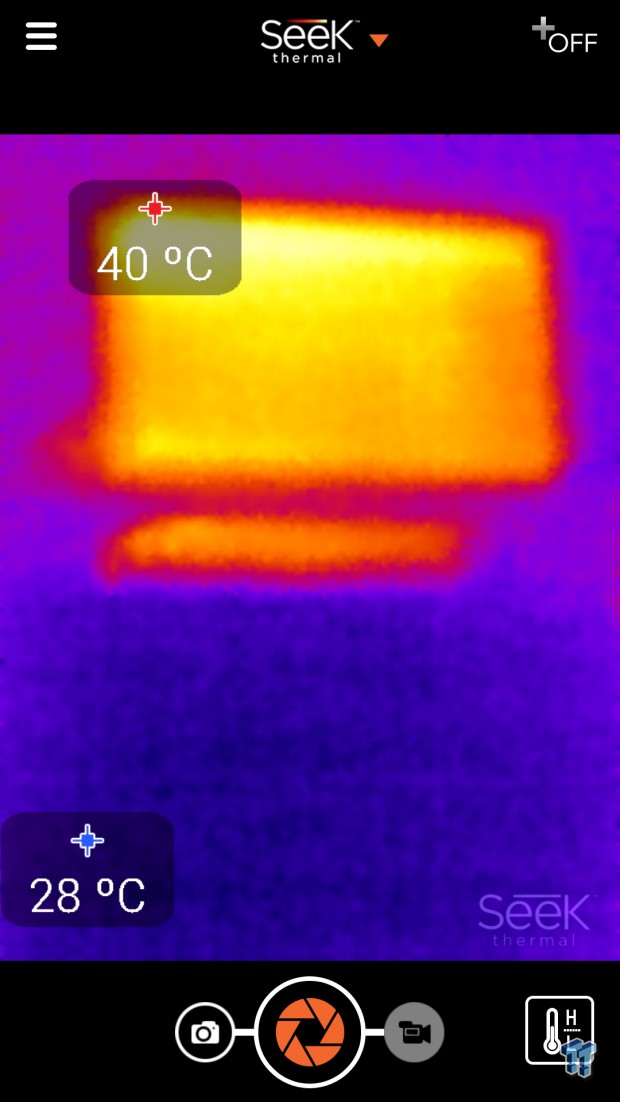 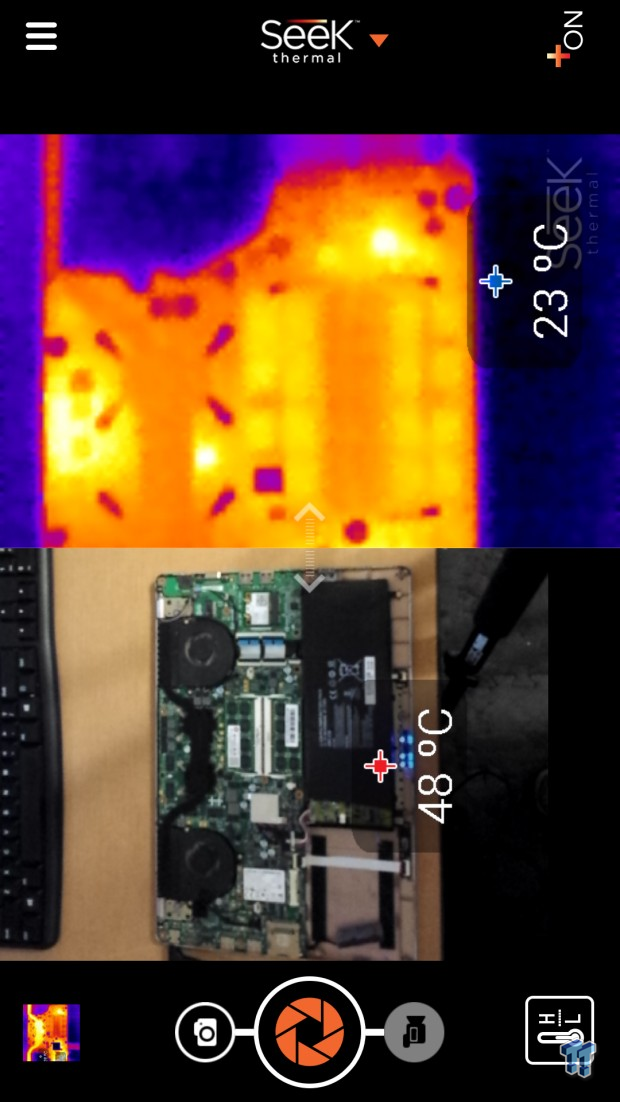 There are two main operating modes, thermal only and a side by side with the phone's camera. With Seek's latest update comes the ability to resize and move the phone camera image to match the thermal camera image. You double tap the screen and then you can change stuff around; it actually works quite well to help align the images. 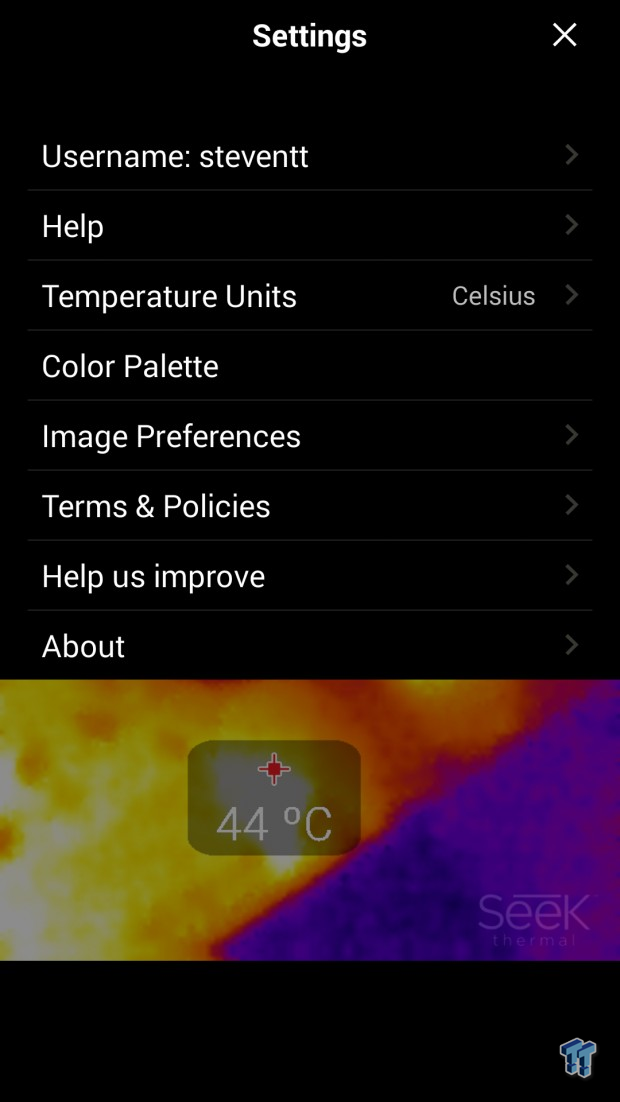 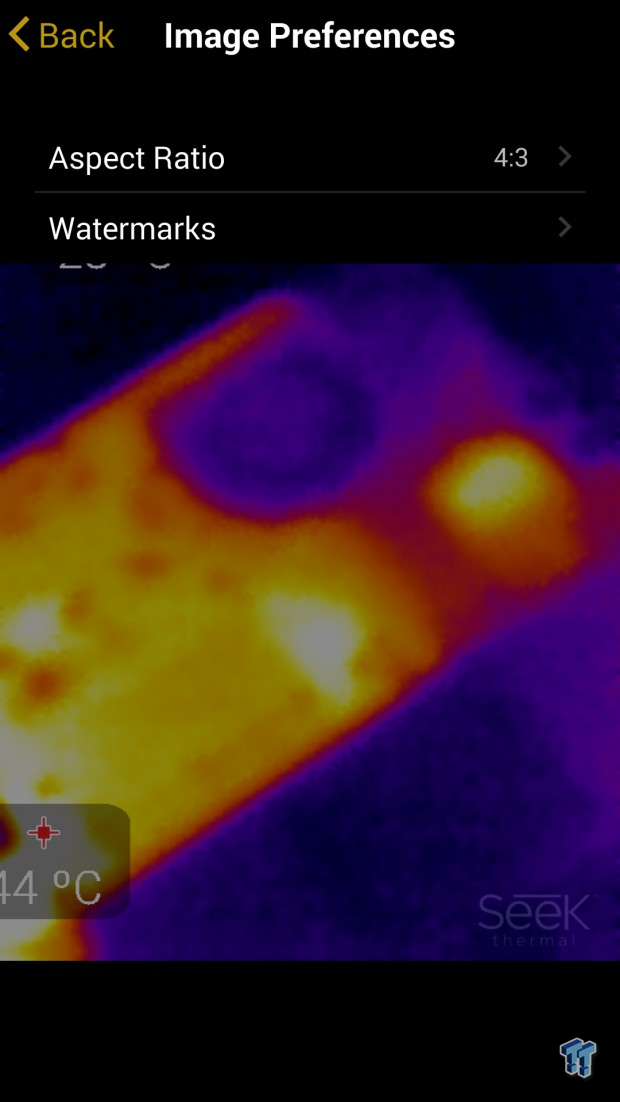 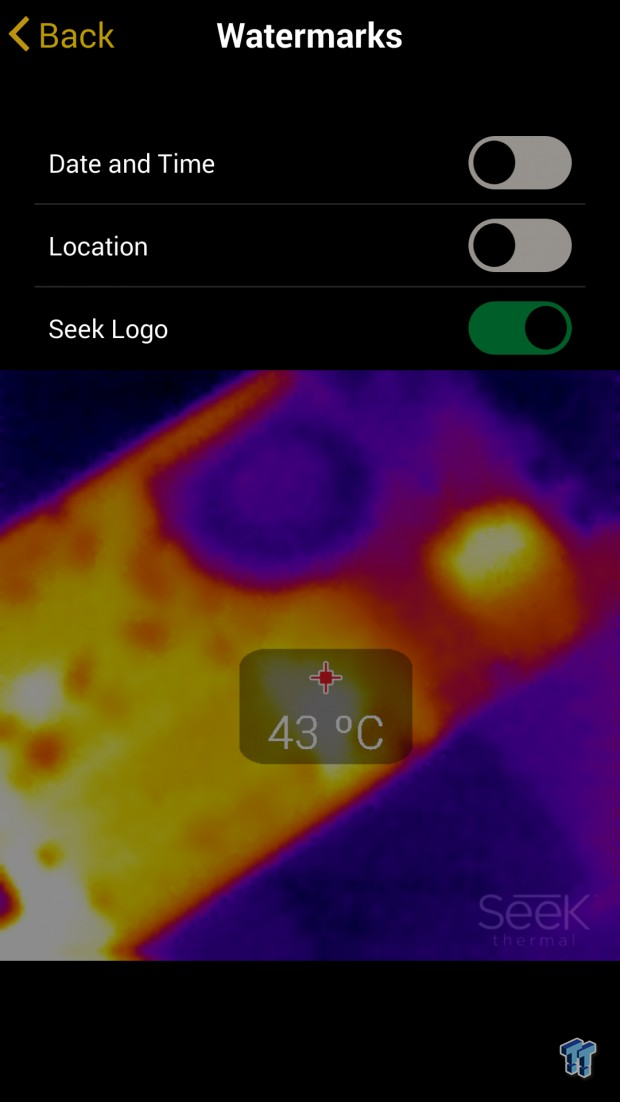 Specific image and watermark settings under the settings menu. 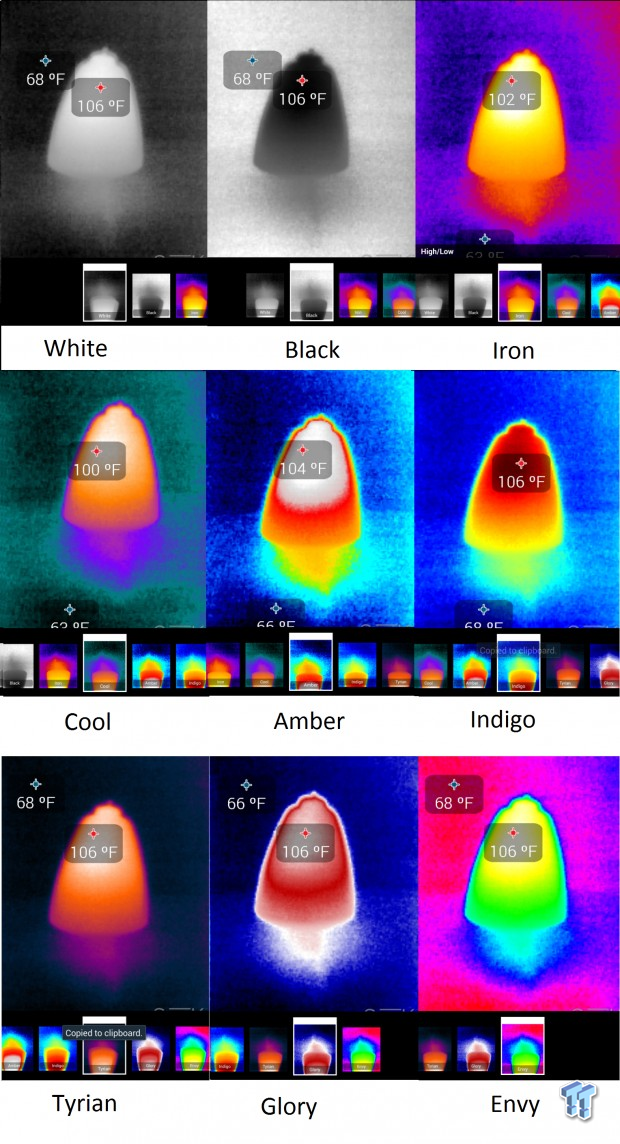 These are all the different color pallets that the software supports. I just use "Iron".

I captured a video with the Seek Thermal XR:

You can see what the laptop looks like in the image above. 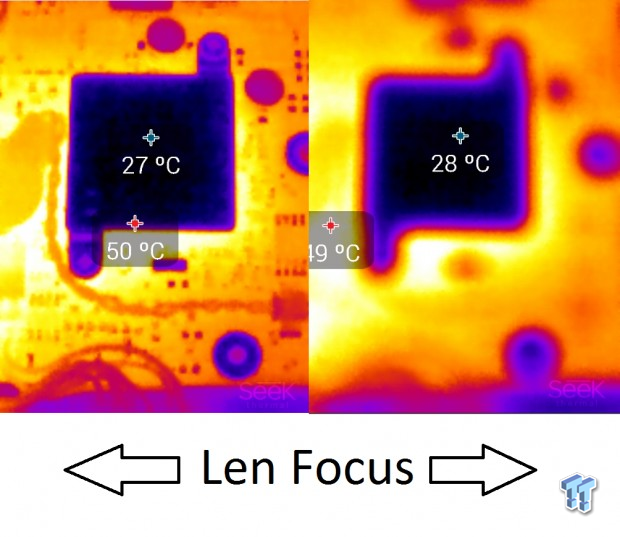 While most of the images in this section are comparisons between the two cameras, I wanted to highlight the focus ability of the lens. The image of the left is focused all the way to the left and the image on the right is the most out of focus I could get the image. 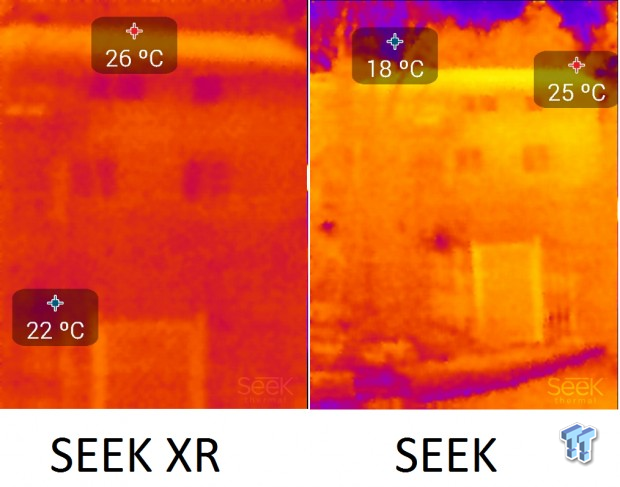 This image of the roof of a house is from about 1000 feet away, you can see that the older model actually does quite well, however, the XR zooms in much closer with the same quality resulting in more detail. 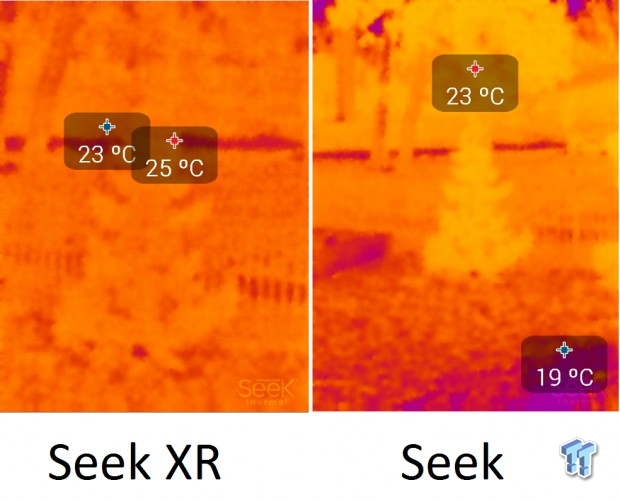 This was shot from 500 feet away from a tree at night. The tree has retained heat from the day. While the older model seems to highlight the tree better, it is because of the other parts of the image that are colder than the tree and which aren't captured in the XR model because of its zoom. The larger the temperature difference in the image, the easier it is for you to distinguish what is in the image. However, the detail in the XR image is better. 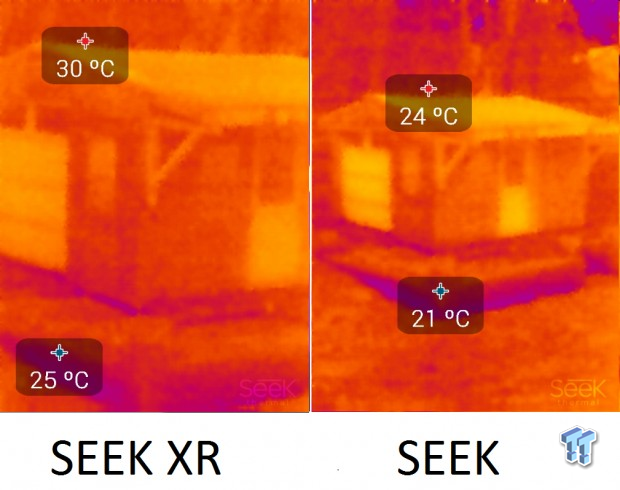 Here the images look like one was shot from 100 feet away and the other from 50 feet, however, both are from 100 feet away. This is the benefit of the XR model, as its zooms in by default, without sacrificing image quality. 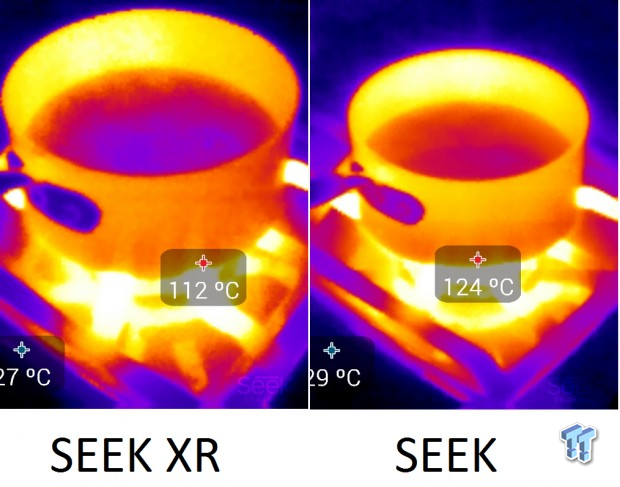 This is a pot of boiling water from a few feet away, the images are pretty similar. For pictures such as this the XR doesn't provide any extra capabilities over its predecessor. 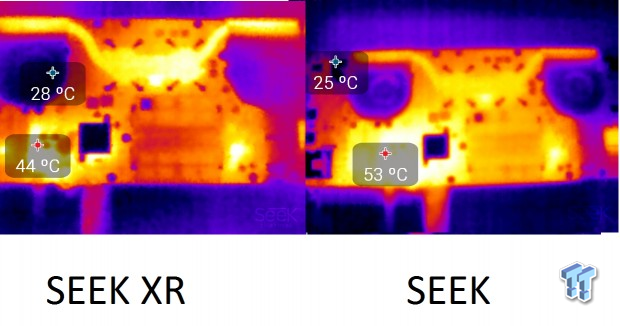 This is the laptop from the video; the XR does much better with up-close shots as well because of its focus ability. 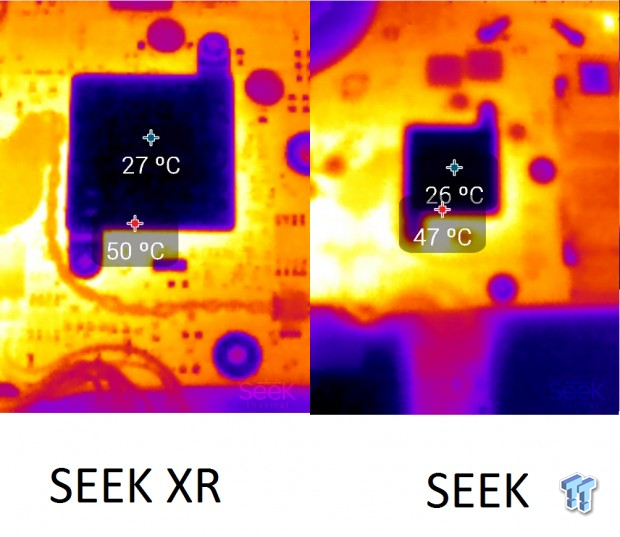 This is image best highlights the difference between the two cameras. The XR is definitely the winner when it comes to macro shots.

The greatest benefit of the Seek Thermal XR is its long range ability, however, it also does quite well up-close. Actually, its ability to capture fine details up close is why I will use the Seek Thermal XR in all my computer hardware reviews in lieu of the original Seek Thermal camera. The enhanced detail that the Seek Thermal XR provides over its predecessor is quite noticeable. The software is intuitive and the updates do make a difference.

Recently, Seek decided to improve rendering quality at the expense of refresh rates, which means that videos come through at lower frames per second compared to before. This isn't a big issue, as the improvements in the image quality are quite noticeable, and frankly welcomed. While before it might have been tough to distinguish objects in the image, now it is easy.

One thing Seek could do to further improve the functionality of the camera is to provide a temperature scale in the software, however, I think that would require processing power that the phone might not have since the scale would change in each frame.

I noticed that Seek increased the price of the Seek Thermal camera from $200 to $250 while introducing the Seek Thermal XR at $300. I honestly thought that $200 was a steal for the original model, as it was and still is the cheapest thermal camera you can buy. However, the extra $50 for the XR model is worth it if you need to take thermal images of objects very far away or very close up.

If you are taking images from 1 foot to 100 feet away, I would say that there is no difference between the two models, in fact, you wouldn't benefit from the focus ability of the XR since the internal shutter would take care of that. However, if you need to take macro images or images from far away, then the Seek Thermal XR should be considered over its predecessor.

PRICING: You can find the Seek Thermal XR Extended Range Thermal Imager, Android (UT-AAA) for sale below. The prices listed are valid at the time of writing, but can change at any time. Click the link to see the very latest pricing for the best deal.

The Bottom Line: Overall the versatility that the SEEK Thermal XR's lens provides, the features the software has, and the periodic updates make this thermal camera one of the most useful little gadgets one could have in their arsenal.