Seen for many years as box office poison until Mel Gibson's The Passion of the Christ blazed the box office in 2004, this year has seen the release of not one, but two huge budgeted, tent pole studio pictures based on the 'good book'. The first, Darren Aronofsky's Noahfailed to win many friends with its revisionist reimagining of the biblical account, and now this; a semi-remake of 1959's The Ten Commandments. So how does this one fare? 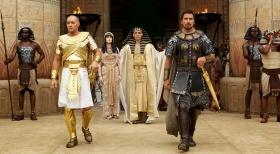 A Prince of Egypt and general in the Egyptian army, Moses (Christian Bale) shares a strong relationship with his half-brother Ramses (Joel Edgerton), despite being the clear favourite and anointed successor to King Seti (John Turturro). When Seti dies, the truth regarding Moses bloodline becomes known, leading him to being cast asunder and banished from Egypt. But God has other plans for Moses, fermenting in Moses' exile his will to free the Israelites from generations of slavery in Egypt. 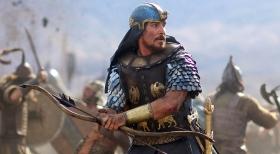 There's a significant amount of talent wrapped up in Exodus. You have a solid cast led by the ever-reliable Christian Bale and a rising star in Joel Edgerton, a solid spec script with an in-built audience, Director Ridley Scott whose stock has never been higher, despite filmmaking for over 40 years and a solid $140 million dollar budget to really do justice to the grandeur of ancient Egypt. Thankfully, it's all in aid of a film with a clear vision and obvious reverence to the source material, even if it is a little, shall we say, updated for modern audiences. 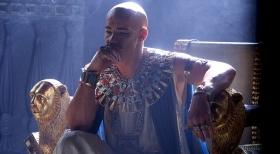 Visually, the film is simply stunning. For his occasional flaws as a director; believable staging is not one of them. Everything looks suitably dusty and lived in, with the Egyptian empire providing great scope for awe-inspiring displays of epic scenery, bringing to life the large scale destruction of God's wrath - but none more so than the climactic parting of the Red Sea sequence. This dazzles with all the magic of modern computer graphics, in the same manner that The Ten Commandments blew minds in the 50's. The addition of stereoscopic 3D is a perhaps odd inclusion, but marks the first time I've deliberately set out to catch a 3D session in some time. I can't say it necessarily brought much to the table, but it didn't take it away either.

Whilst some critics have observed/ complained regarding the films 150 minute run time, I can't say I share their concerns. I found Exodus to be a tightly constructed film with very little fat to cull. If anything, they would have probably loosened it up a little - it's not like there's not plenty of source material to draw from. I note that the film ends with Moses imprinting on the stone tablets that would become the Ten Commandments, rather than continuing on with the destruction of the tablets on Mount Sinai as other adaptations have done. 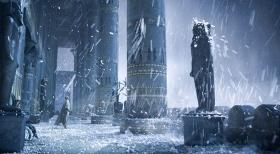 Exodus: Gods and Kings is a thoroughly entertaining ride; a throwback to a sensibility of motion picture production that hasn't been seen in many years. Rest assured, there won't be another version of Exodus for a very, very long time. This is a film that will enthrall believers and nonbelievers alike but while it's done little to set the box office alight, I think time will be much kinder to it than Noah, even if it is designed for and practically demands to be seen on the biggest screen possible. 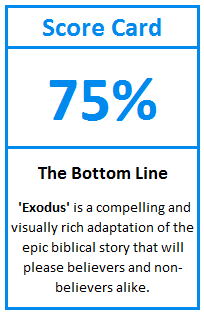