Confession time: It's been about a decade since I've set foot in a church. Whilst I don't necessarily regret my Christian upbringing, if pushed today, I'd probably describe myself as agnostic. Still, I have enough of a respect for the billions of Christians past and present that revere the Bible (even with its varying degrees of subjectivity) to recognize that it's not a source that you want to take unnecessary dramatic license with.

But with Noah, Paramount and Director Darren Aronofsky have done exactly this by throwing $125 million at a project that has deftly alienated what should be its core base, disinterested casual cinema goers, and courted controversy by its depiction of deities. The movie has also been banned in some Middle East countries. And for what? Because it certainly isn't a good film. 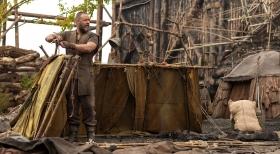 Following a disturbing dream, Noah (Russell Crowe) believes that the Creator intends to cause a deluge to rid the world of the wickedness that has run rampant following the excision of mankind from the Garden of Eden. After consulting with his grandfather Methuselah (Anthony Hopkins) and taking possession of a seed from the Garden that sprouts into an immense forest from a desolate plain within seconds, Noah and his family begin the task of constructing a vessel that will allow human and animal kind to rebuild the Earth.

However, the debauchery of the outside, led by Tubel-Cain (Ray Winstone), also seek solace from the coming disaster and prepare to wage war against Noah and his family. 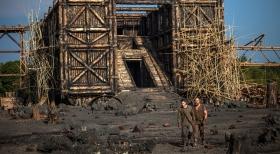 Director Darren Aronofsky is a talented film maker--that much is certain. But why he was so intent on producing a script that flies in the face of the book, with a ferocity that can only be described as disdain, is something of a mystery.

Further, I imagine that the notion that the already sensational passage of Genesis needed further dramatic extrapolation is likely quite offensive to those who take these matters more seriously than myself. So, I can only ask, what is this film's audience?

Case in point: in the biblical passages, it is established that some angels looked upon Earth with envy and decided to abandon their home in order to pursue sexual relations with Earthly women, the spawn of which were the tyrannical giants known as the Nephilim.

Aronofsky portrays the physical manifestations of these former angels as stone warriors, dubbed 'Watchers', who had left heaven to selflessly help mankind. They protect Noah and his family from the wicked and even assist with the construction of the ark.

Even more controversially, Aronofsky re-casts Noah himself as some kind of extreme green eco-warrior, tasked by God (sorry; "The Creator") to build an ark to save human and animal kind, not because of their debauched, sinful behavior, but because of our collective lack of respect for the Earth. This comes despite God's recorded entreaty for mankind to populate and subdue it. And I'm not even going to attempt to touch on the 'ark stowaway', 'action hero Noah', or 'Noah goes crazy' subplots. 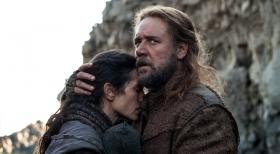 One element I can't fault, however, is the acting chops of the overwhelmingly solid cast, headlined by Russell Crowe channeling his hard man persona once more, nor Jennifer Connolly or Emma Watson whose roles are intended to inject a little heart into the picture, despite the material painting them as painfully submissive. Even the cameos are cast with prestige, including Anthony Hopkins as Noah's 900 year old grandfather Methuselah.

Following apparently disastrous preview screenings of Noah, Aronofsky and Paramount had apparently been at loggerheads regarding the final cut of the film, the latter party allegedly requesting a more traditional narrative, whilst the former won the battle. However, I'm confident that the structural problems of Noah go all the way back to the earliest drafts of the script and simply couldn't be made more palatable with judicious editing.

I can't even say that Noah is a film made in good conscience. It's an embarrassment to Christians and a cringe-inducing, mean spirited embarrassment of a film in its own right. Don't walk-run! Away, that is. At least we can thank the Creator that we were spared the release of a 3D conversion that other countries are being issued, a final shame just a notch above promotion via McDonalds Happy Meal toys. 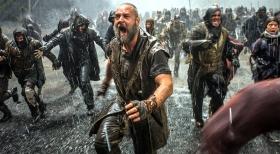 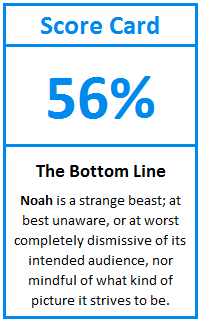