It's probably this time every year that casual audiences are reminded of this Mel Gibson passion project (no pun intended), which 10 years ago transcended poor pre-release buzz to captivate audiences worldwide and become a box office bonanza of $600 million. Not bad for an R-rated movie about religion. 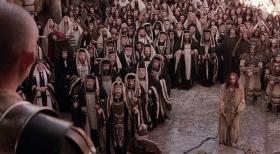 Following the final hours of Christ before his crucifixion, The Passion of the Christ draws primarily on the four "Passion" gospels of the Old Testament, namely Matthew, Mark, Luke, and John, to detail the excruciating torture and death that was bestowed upon the son of God, in order to fulfill biblical prophecy and allow mankind to repent their sins in the eyes of God.

Presented in non-chronological order, the film begins with Jesus (Jim Caviezel) praying with his apostles, while Satan (Rosalinda Celentano) attempts to subvert the course. Following the payment of 30 pieces of silver, one of his apostles, Judas Iscariot (Luca Lionello), betrays him with a kiss, which sets in motion a mob trial led by corrupt Jewish leaders who accuse him of apostasy and heresy. Bought before an initially unwilling Pontius Pilate (Hristo Shopov), Jesus is soon condemned to death by the stake.

The Passion of the Christ certainly is not the most accessible motion picture of all time, partially due to the use of English subtitles to translate the use of Aramaic and Hebrew spoken languages; significant bloodshed and violence that culminated in an R rating; and wider issues, including the increasing unpopularity of organized religion, especially in younger demographics. That aside, it's a remarkable picture that is at all times entertaining, compelling, and overwhelmingly true to the passages of the Bible known to billions on Earth today. 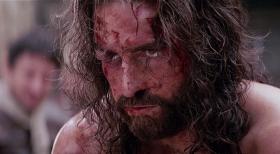 The Passion of the Christ is encoded with AVC MPEG-4 compression and presented in the intended aspect ratio of 2.35:1.

Filmed on 35mm and finished in a 2K digital intermediate, when such technology was in its infancy, Passion of the Christ certainly looks good in 1080p. Whilst the image is frequently tinged with heavy filtering and color grading that accentuates golden and blue tinged hues, there's an abundance of image detail--perhaps a little too much in some of the film's more graphic sequences.

There's a reasonable amount of film grain on display, but I suspect this is due to a combination of artist intention and resultant from low light shooting, rather than any encoding deficiency. Black levels are reasonably good, but perhaps a little too slanted to dark greys for my liking. I didn't detect any encoding errors--a healthy bitrate is retained throughout, and there was no issue with film artefacts. 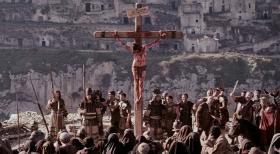 The Passion of the Christ is presented in DTS HD Master Audio 5.1 at 24 bits.

Director Mel Gibson took a controversial decision to eschew English dialogue and have the actors speak a combination of tongues, including Hebrew, Latin, and Aramaic. Well, controversial is not quite the word--everyone just assumed he had gone nuts. The Blu-ray includes this original track and includes English subtitles below the image frame, in a relatively ugly font. In keeping with the Director's wishes, there is no English dubbed track.

Passion of the Christ comes with a reasonably aggressive and impactful track that heightens the force of emotional impact. Surround usage is kept quite high, although some of the effects do draw attention to themselves at times. Bass effects are quite generous, but are cohesive to the track in general. 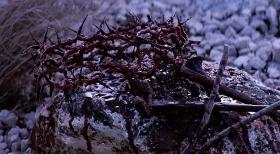 Rather than squash the compression of the main feature disc or re-encode the standard definition features on a second Blu-ray disc, the distributors have chosen to simply include the second DVD disc of bonus features from the previously released DVD version. Let's take a look at what's here.

First up are the massive Four Audio Commentaries: one by Director Mel Gibson, Cinematographer Caleb Deschanel, and Editor John Wright; another with Producer Stephen McEveety, Visual Effects Supervisor Ted Rae, and Make-Up and Visual Effects Artist Keith Vanderlaan; a "Theological Commentary" with Director Mel Gibson, Language Consultant Father William Fulco, and Theologians Gerry Matatics and Father John Bartunek; and a final track consisting of an isolated score with commentary by Composer John Debney. I'm pretty sure that after listening to all the tracks, you will not only be an expert on the film, but also be quite well versed in the bible passages. The thing to take away from the tracks featuring Mel Gibson is just how deeply religious, quite eloquent, and knowledgeable regarding his faith he is.

The centerpiece of the DVD disc is the 21-part, 100 minute long By His Wounds, We Are Healed: Making The Passion of the Christ, which unsurprisingly given its length is allowed to go into substantive detail regarding the key points of production. This is a superb documentary that details Mel Gibson's $30 million gamble. Even the film's sensitive area of marketing gets a look in.

Next up is the five-part, 60 minute long documentary The Legacy: A Historical and Cultural Retrospective of the Crucifixion, which is perhaps a little more wide-ranging than the name implies.

The Below The Line Panel Discussion is a 13 minute sit down discussion that rounds up some of the principal artists to discuss their craft, interspersed with film footage to illustrate certain points. A notable absentee is Mel Gibson himself. Sadly, this is too short to really impart any knowledge.

Finally, we have two Theatrical Trailers, two TV Spots, and some Still Galleries divided up into logical segments.

PRICING: You can find the The Passion of the Christ Blu-ray for sale below. The prices listed are valid at the time of writing but can change at any time. Click the link to see the very latest pricing for the best deal.

United States: The The Passion of the Christ Blu-ray for $9.49 at Amazon.

Canada: The The Passion of the Christ Blu-ray retails for CDN$9.99 at Amazon Canada.