Not long ago, we had the Netgear R8000 in the lab our first look at a TriBand Wi-Fi solution. AC3200, as it's called, is a unique spin on 802.11 where vendors are pairing together a single 2.4GHz band with dual 5GHz bands giving consumers more flexibility and in turn interoperability with older legacy networks.

The EA9200 is the latest to come from Linksys, and as you would have guessed by now, is an AC3200 solution. Wi-Fi connectivity of the Linksys EA9200 is laid out so the 2.4GHz band is capable of 600Mbps via 256QAM modulation, and then we have both 5GHz bands that can do 1300Mbps each. On the back of the unit, we have 4-gigabit LAN ports along with a single gigabit WAN port along with dual USB ports.

Let's dive in now and take a close look at the unit over the following pages. 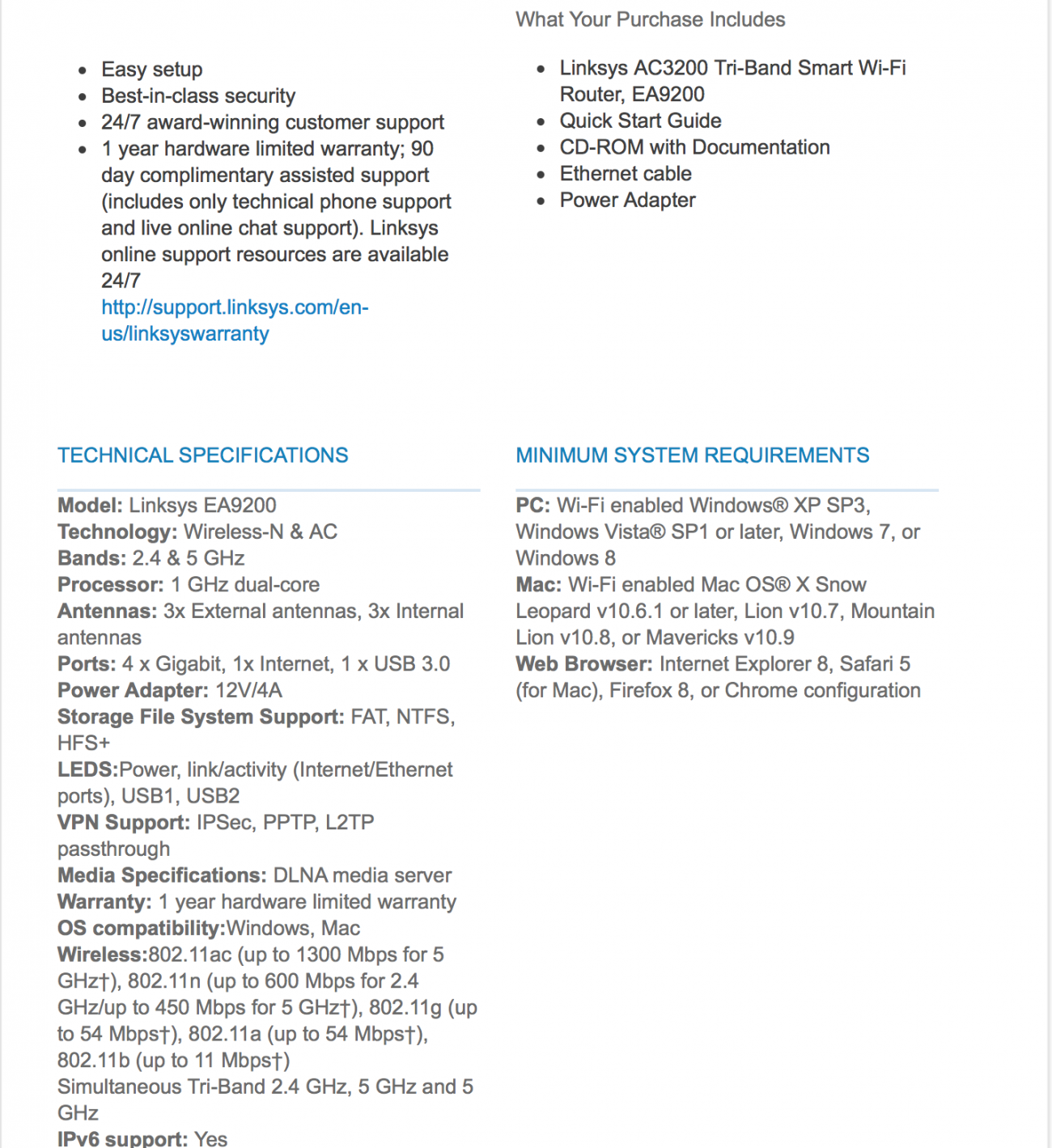 The Linksys EA9200 features a dual-core 1GHz processor and three offload processors, though we have no mention of the amount of RAM or flash, but since this is an almost identical platform to the R8000, we should have 256MB of RAM and 128MB flash.

PRICING: You can find the Linksys EA9200 AC3200 Tri-Band Smart Wi-Fi Router for sale below. The prices listed are valid at the time of writing but can change at any time. Click the link to see the very latest pricing for the best deal. 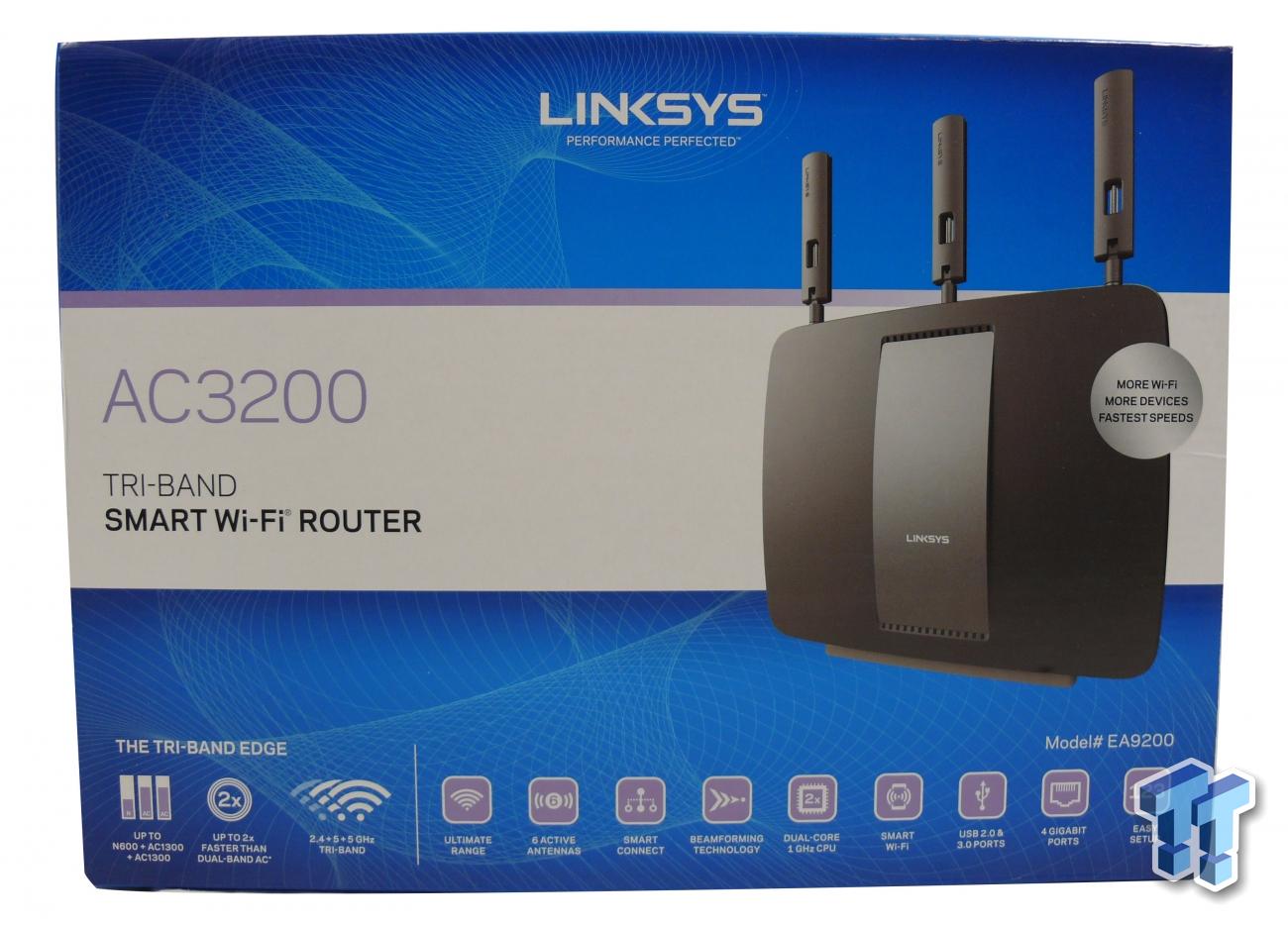 Product packaging for the EA9200 carries an image of the router to the right with marketing detail below. 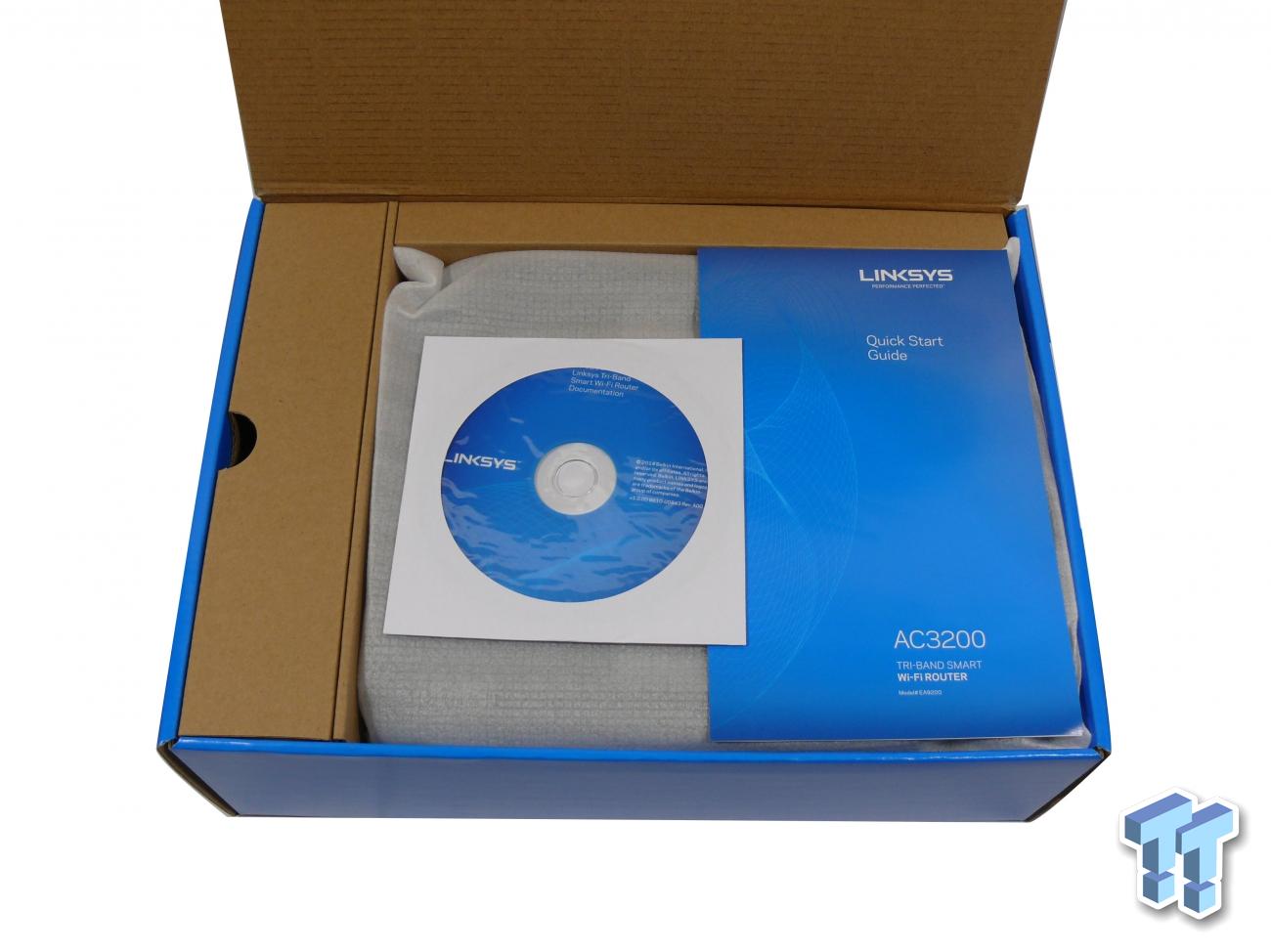 Internally, Linksys has packed everything very cleanly with everything in their respective compartment. 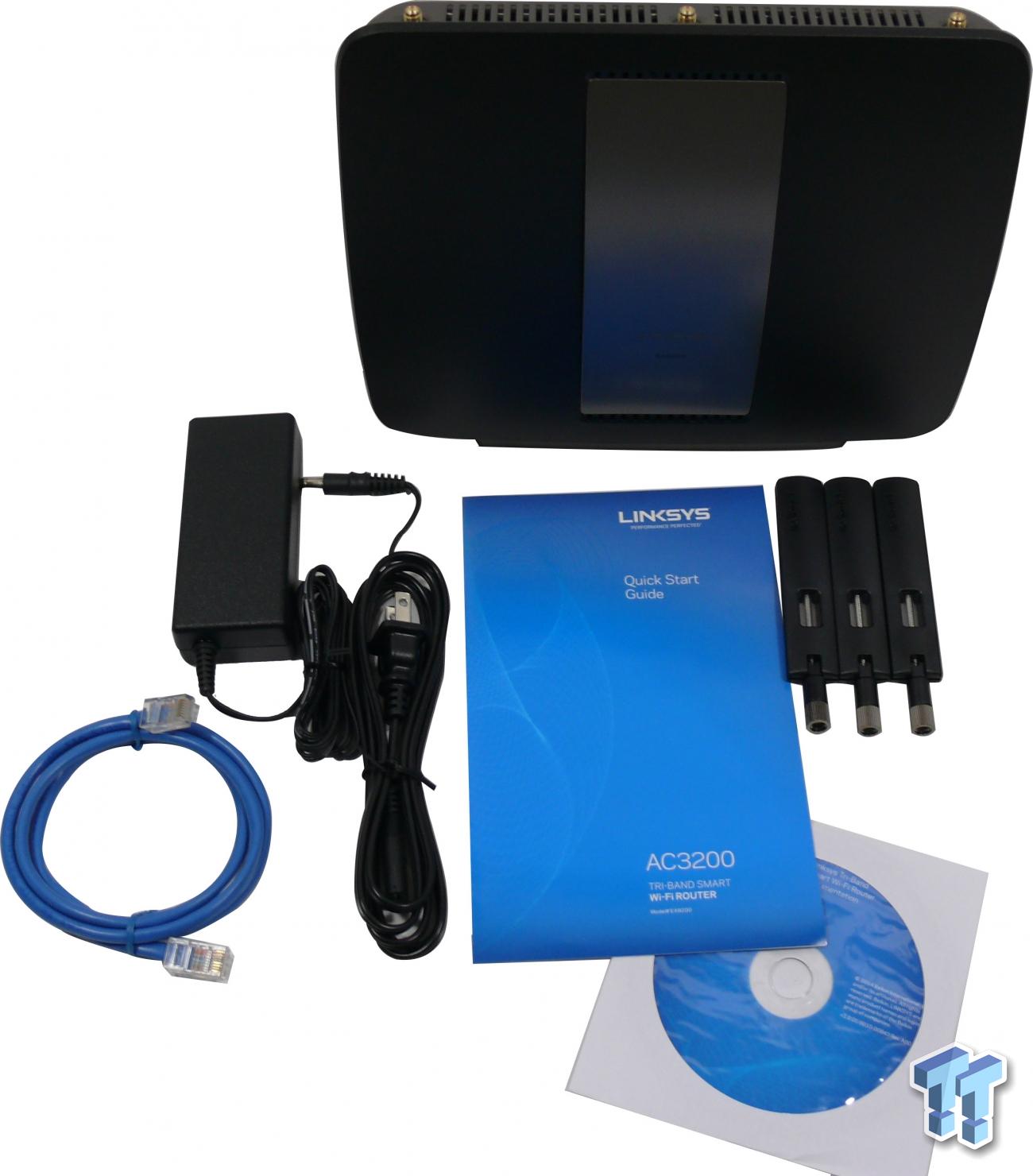 Scope of delivery includes an Ethernet cable and power adapter, along with three external antennas and reading materials. 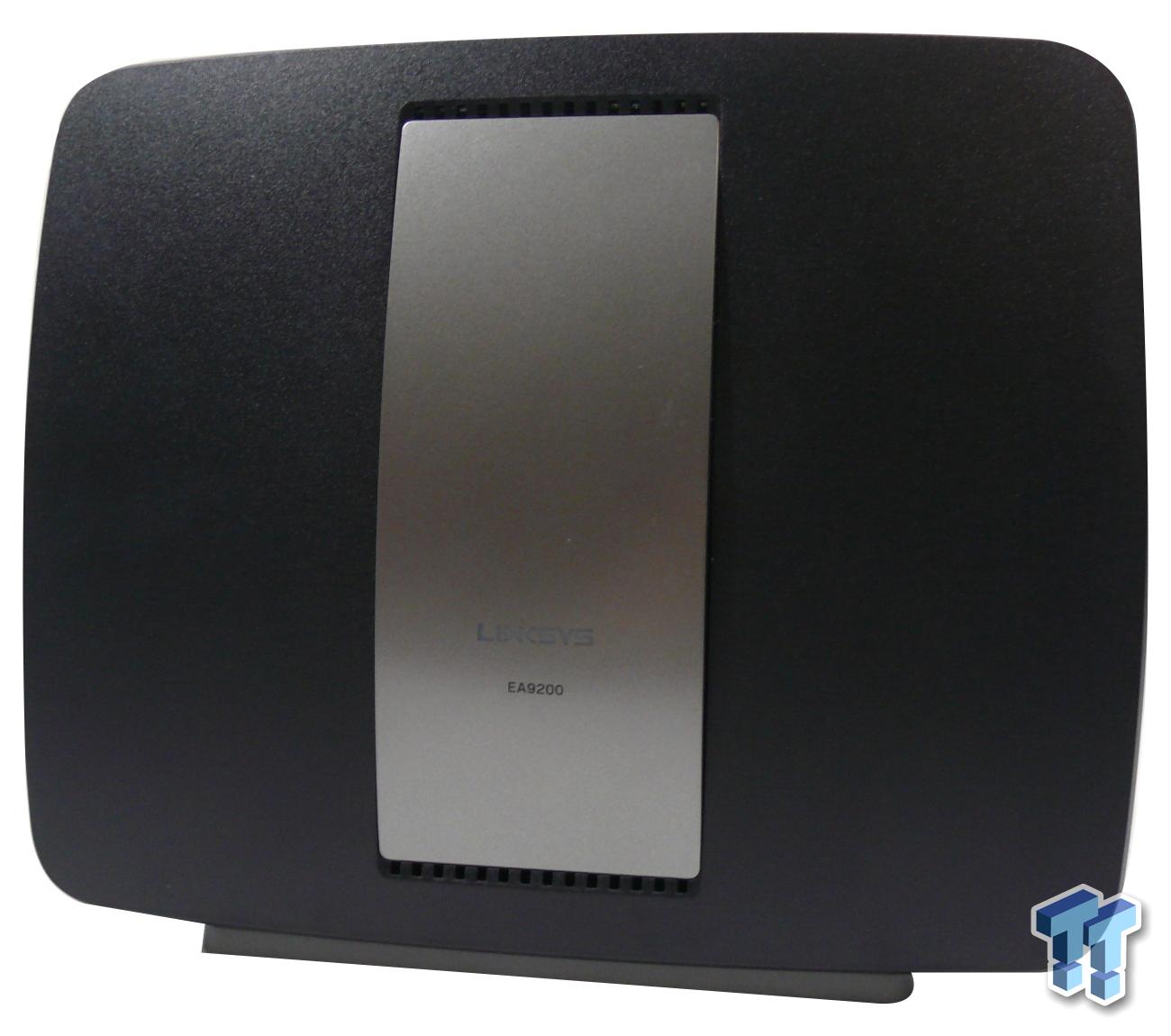 The EA9200 isn't your standard horizontal cube router, this time around Linksys has moved to a vertical form factor, hence allowing this solution to use less space in your home or office. 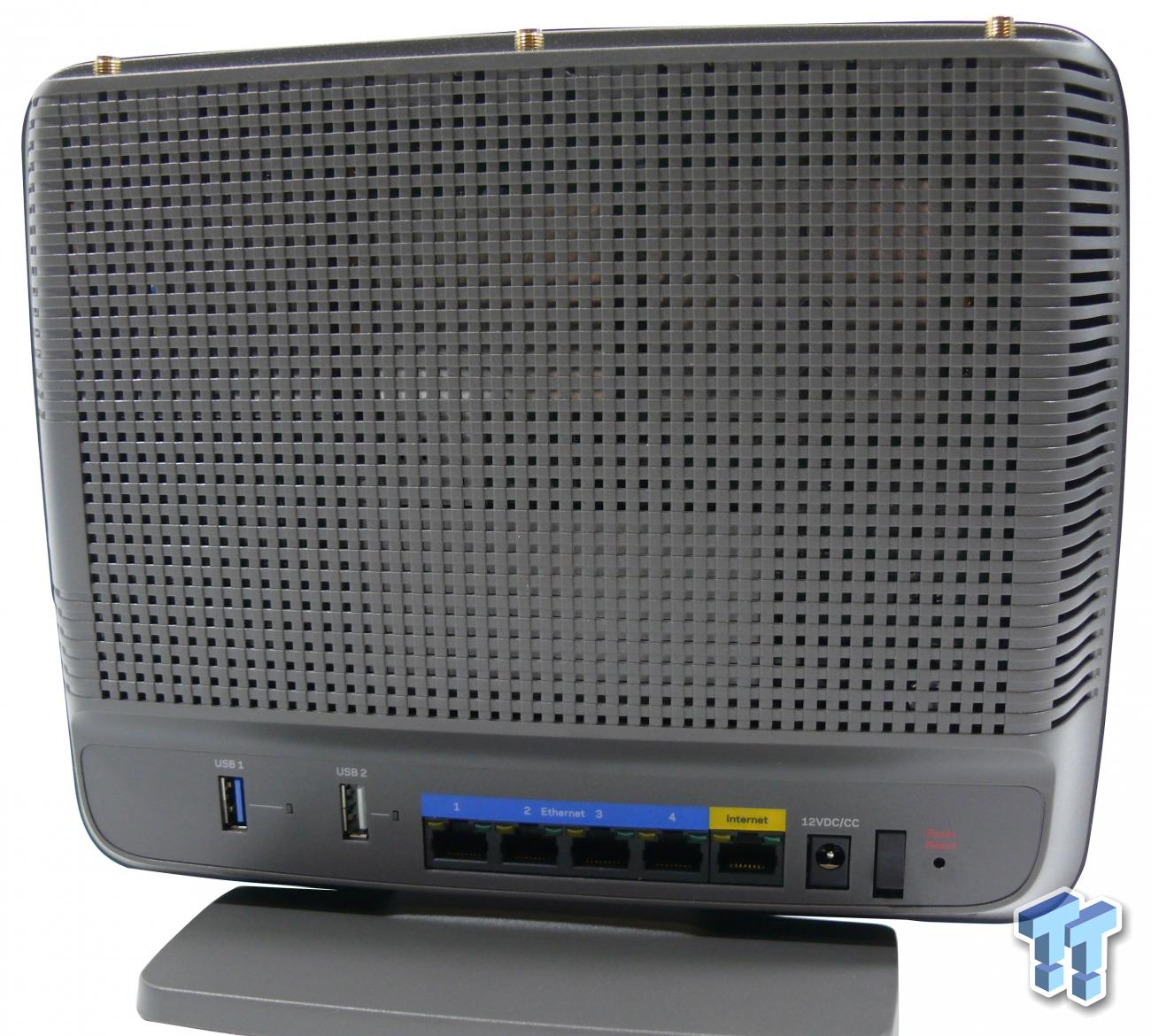 The back of the router houses four gigabit LAN ports, alongside a single WAN port and dual USB ports.

The top of the router houses three SMD connectors for the antennas. 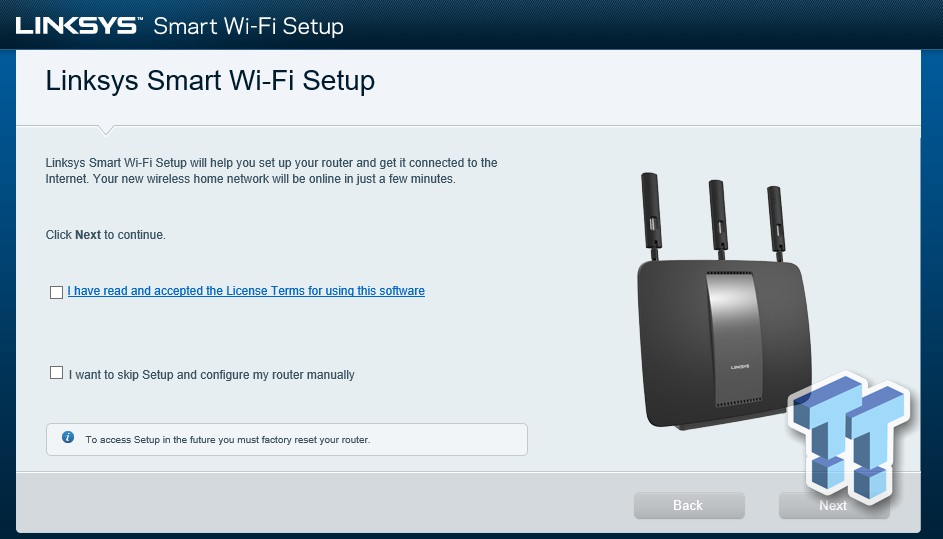 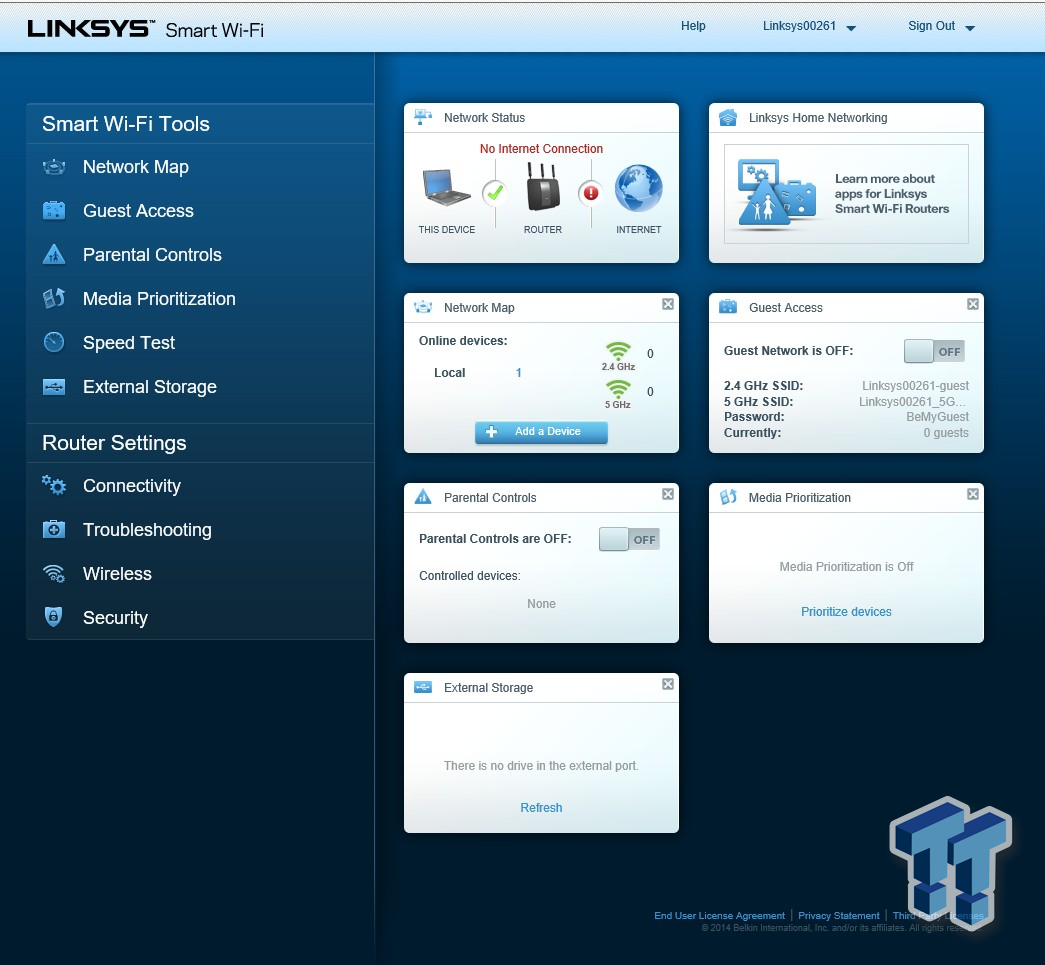 The landing page gives you a basic overview of the router. 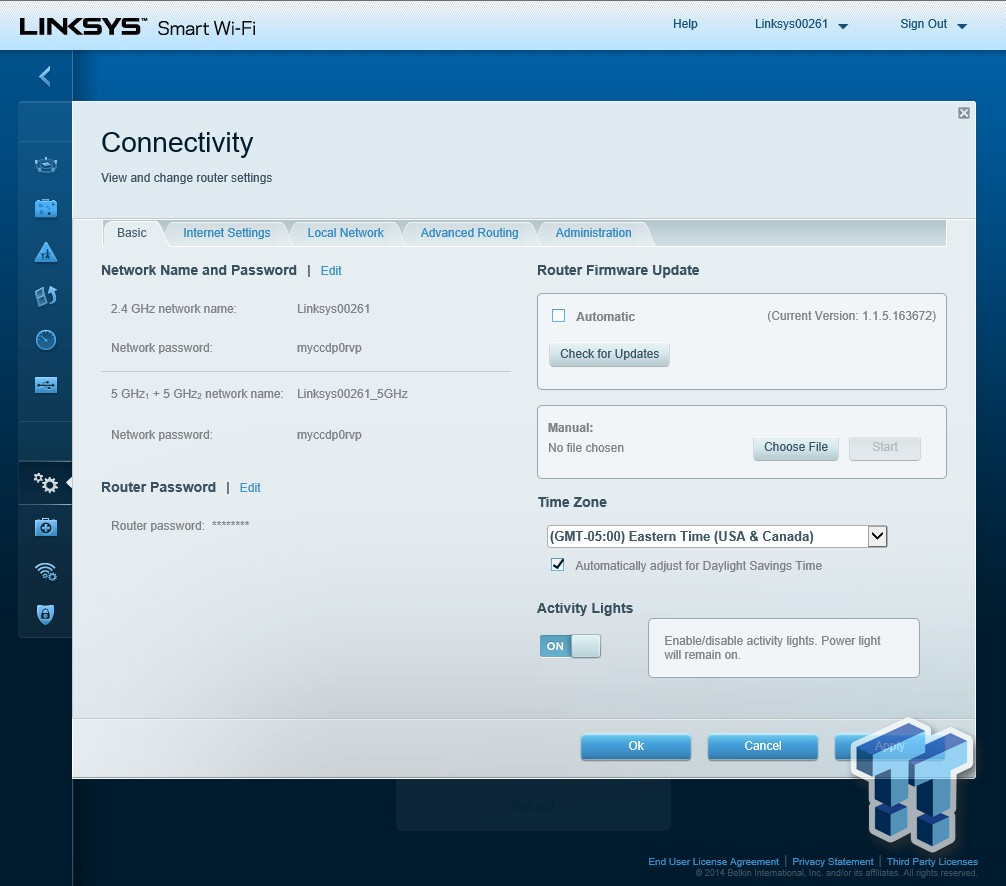 Moving over to the connectivity menu, we have options to change the router name and password. You can also manage the firmware from this menu to the right. 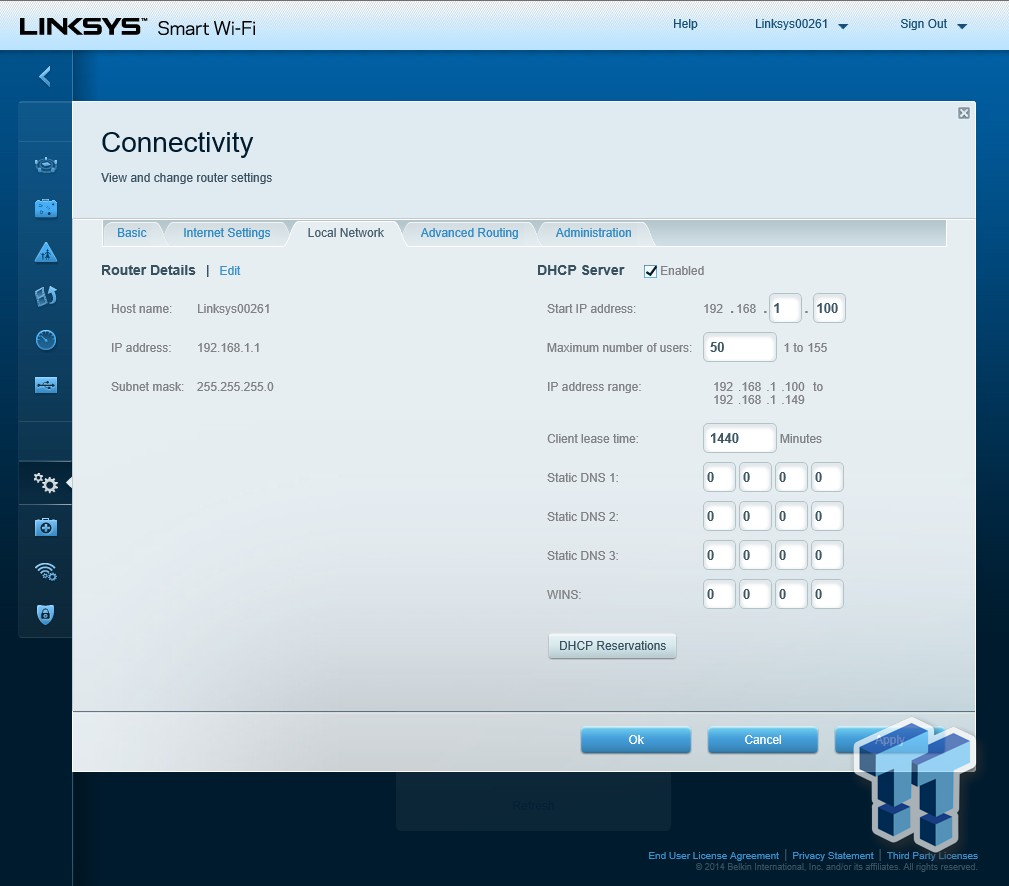 Deeper into the connectivity menu, we have options for the DHCP server. 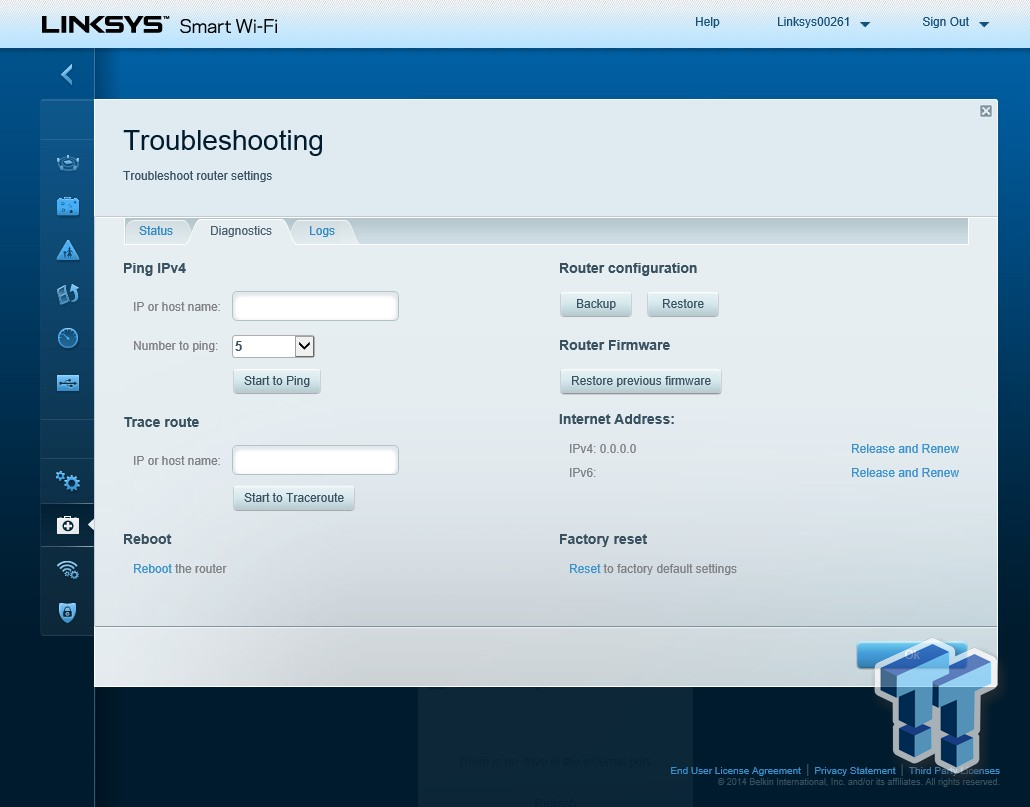 The troubleshooting menu allows you to reset through router, and even revert firmware if you have issues. 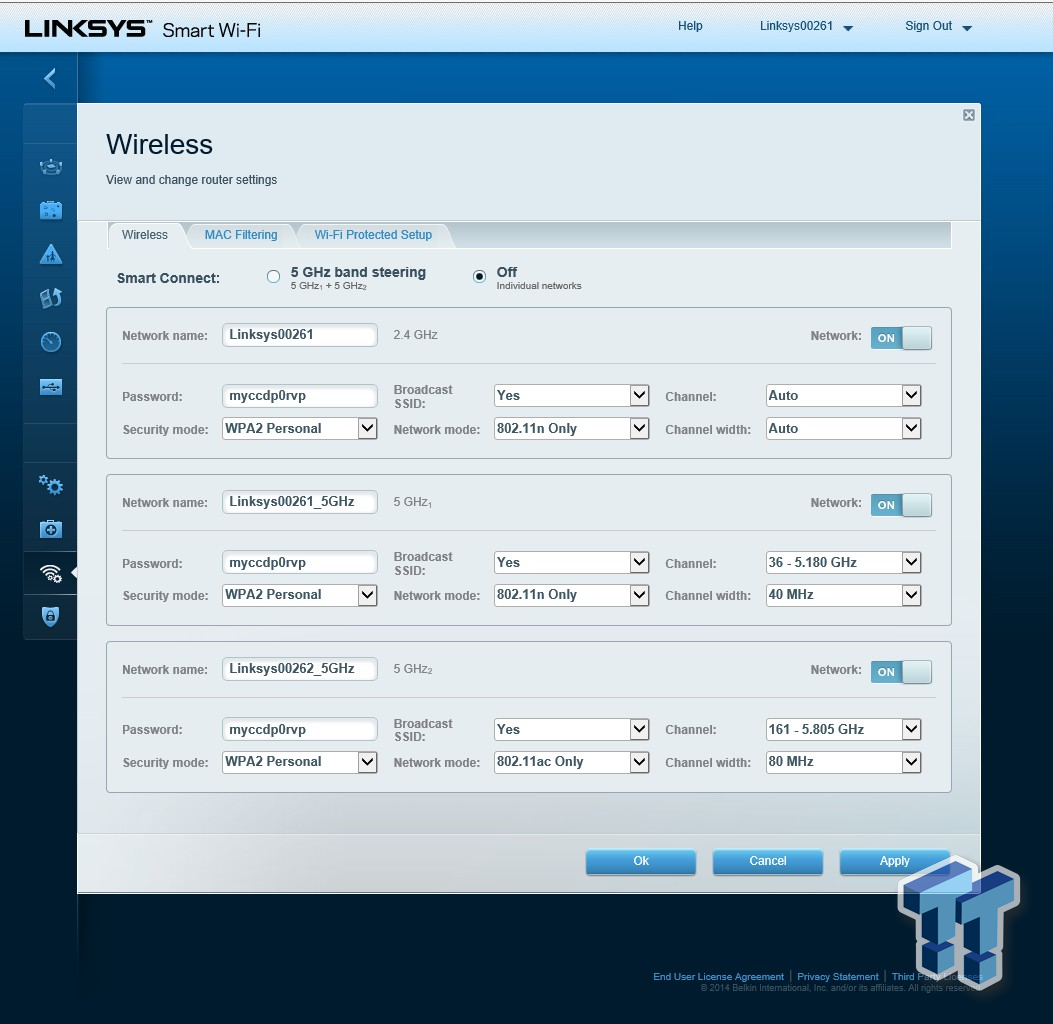 The Wireless menu has changed quite a bit with the second 5GHz band being introduced. Within this menu, you can change everything from the SSID to the wireless password and even channel settings. 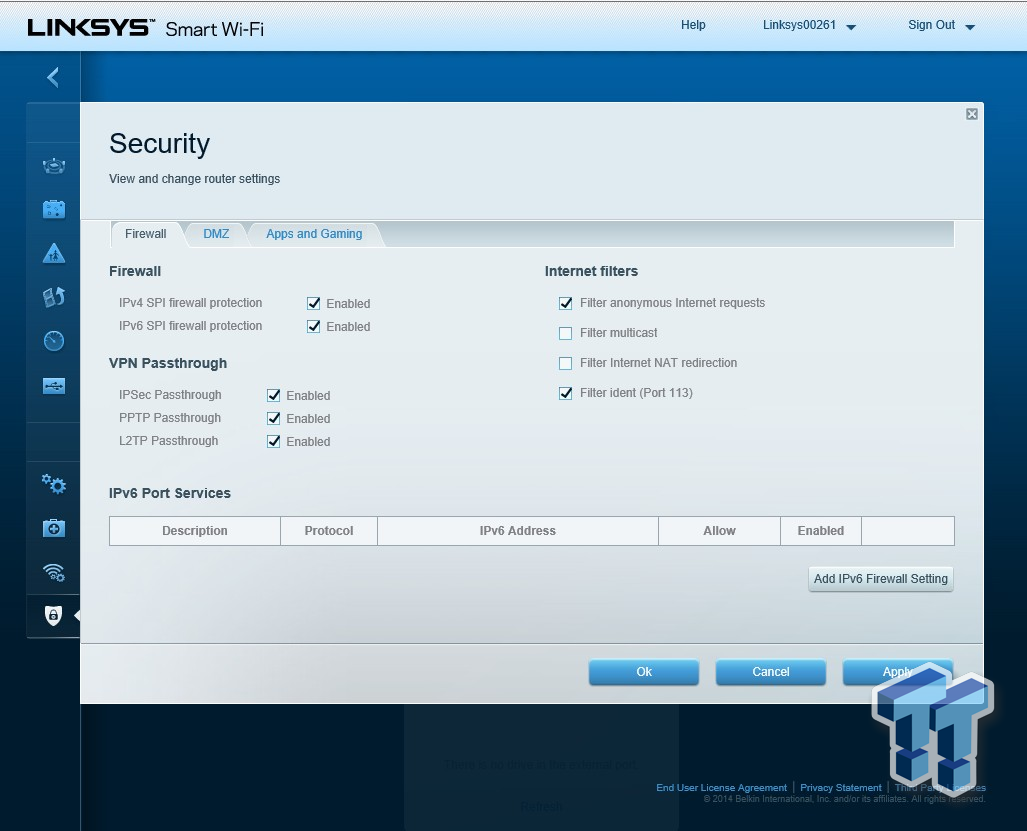 The security menu allows you to configure the SPI firewall settings along with VPN pass-through if needed. 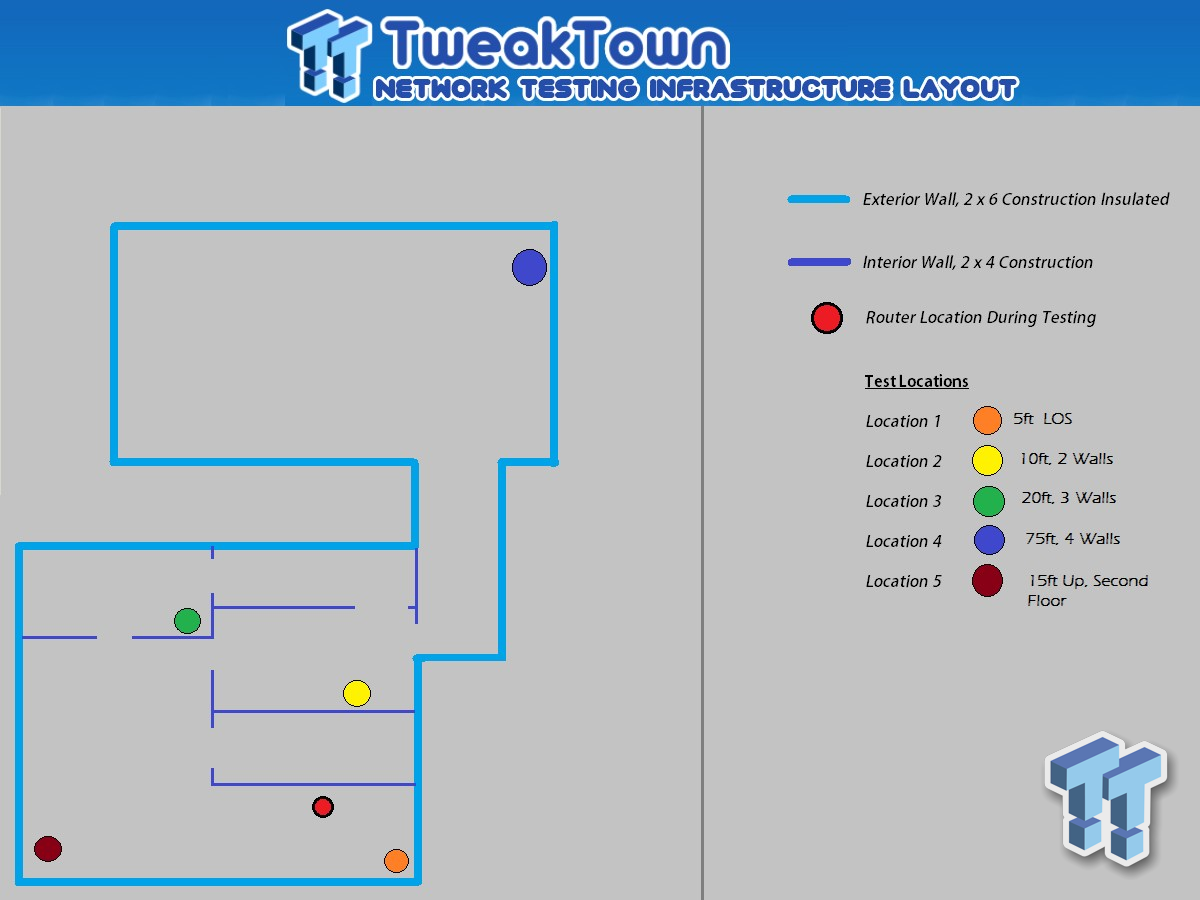 We test throughput in a dual-node network environment consisting of a Custom PC with a GIGABYTE Z97UD7 TH, Intel Core i7 4770 Processor operating at 3.4GHz with 16GB of DDR3. The second system features an ASUS Z9PED-WS and E5-2687W and 64GB of DDR3 from ADATA. 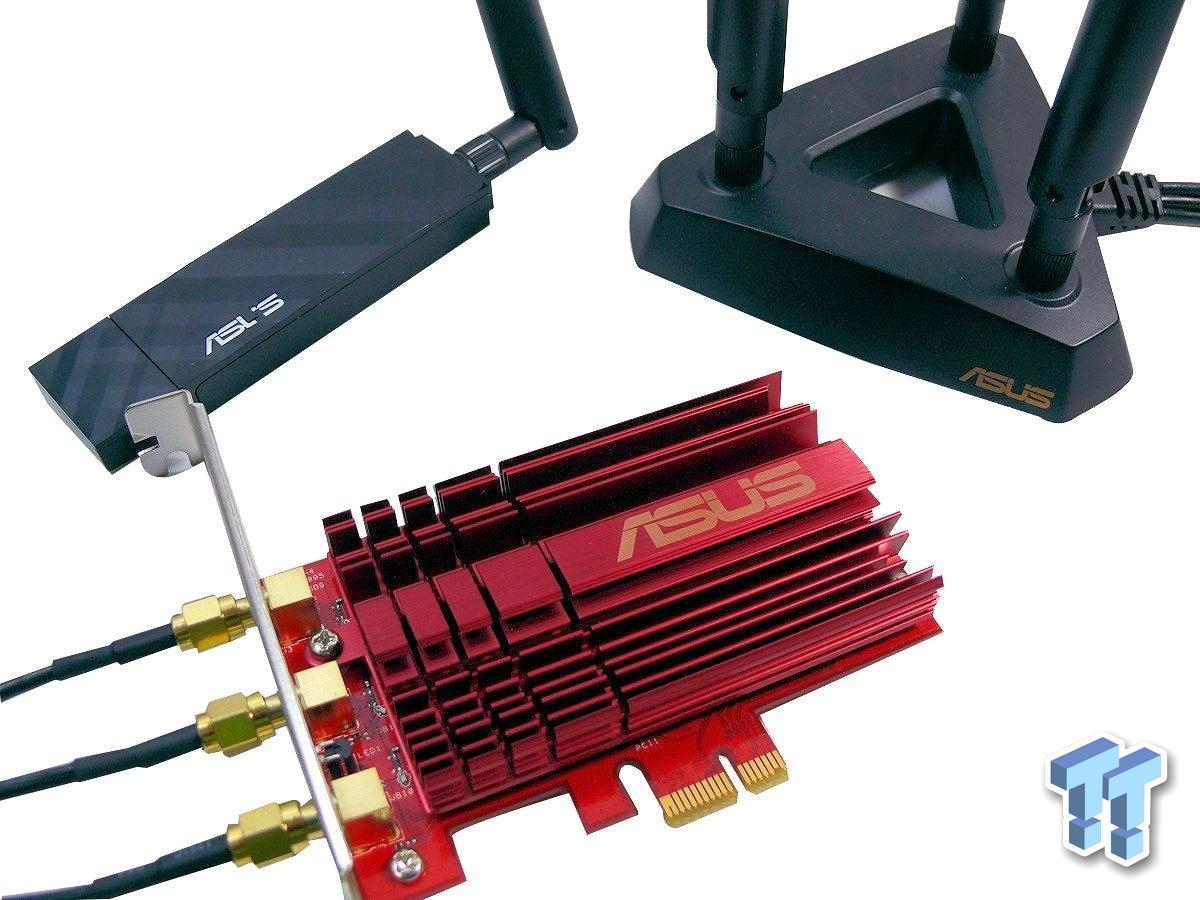 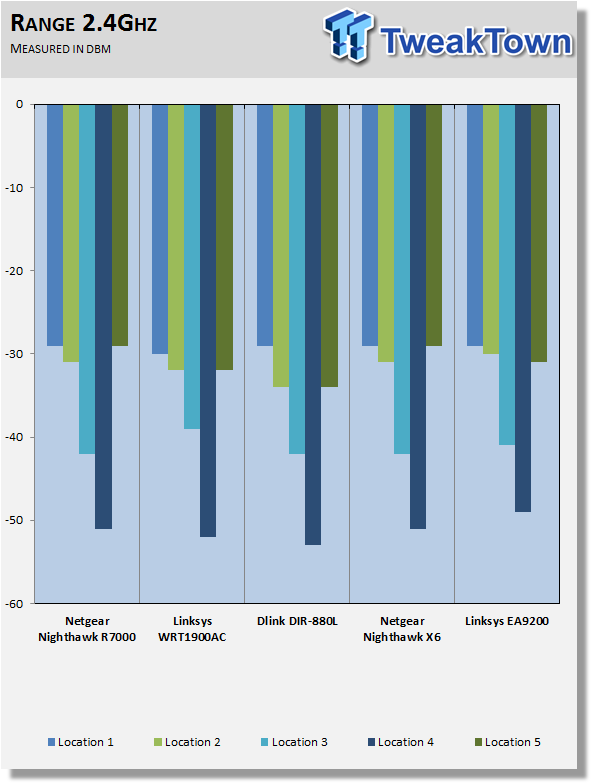 This time around we cleaned up our charts and now for range show only the best routers we have tested. The EA9200 did quite welcoming in slightly better than the R8000 in all locations minus location 5. 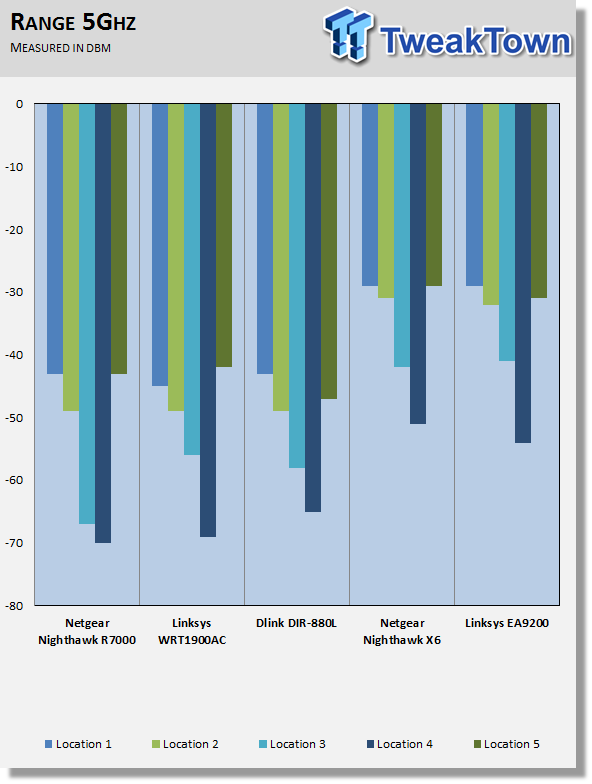 As you can see above, the Linksys EA9200 enjoys the same amazing range that we found with the R8000 from Netgear. 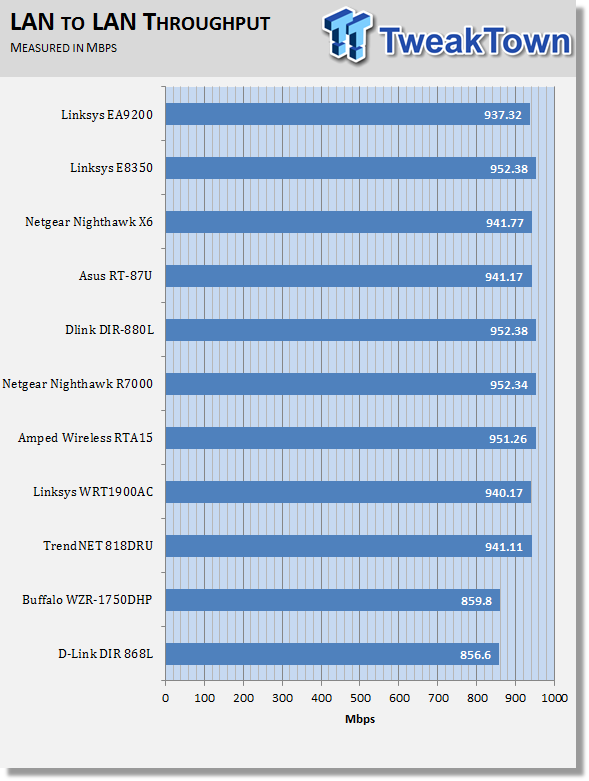 LAN to LAN throughput peaked at 937.32 Mbps, on par with most AC solutions today. 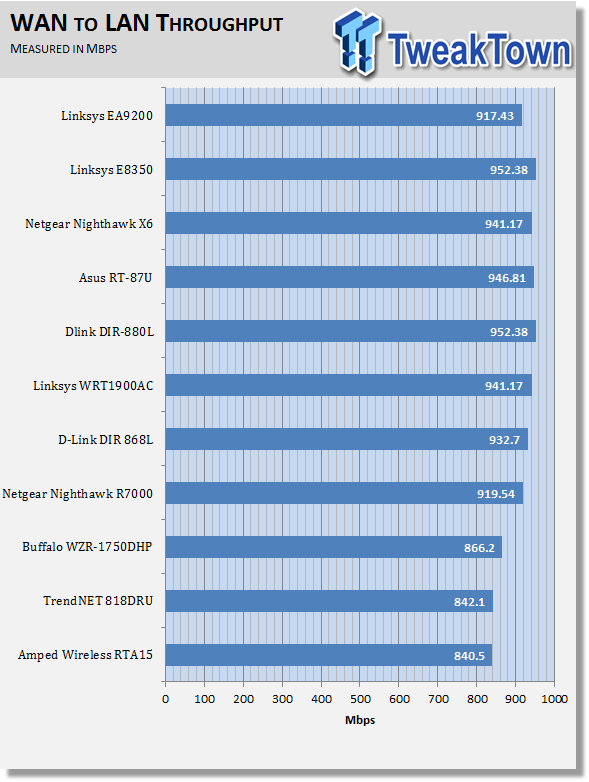 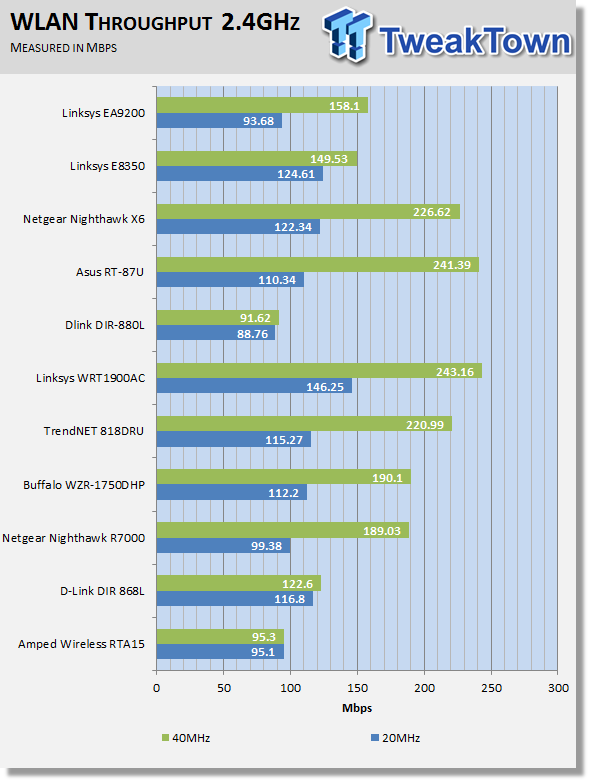 In our 2.4GHz testing, the EA9200 was less than impressive. The 20MHz band did rather well at 93.6 Mbps throughput but switching over to 40MHz we seem to have lost performance with results peaking at 158 Mbps similar to what we found with the E8350. 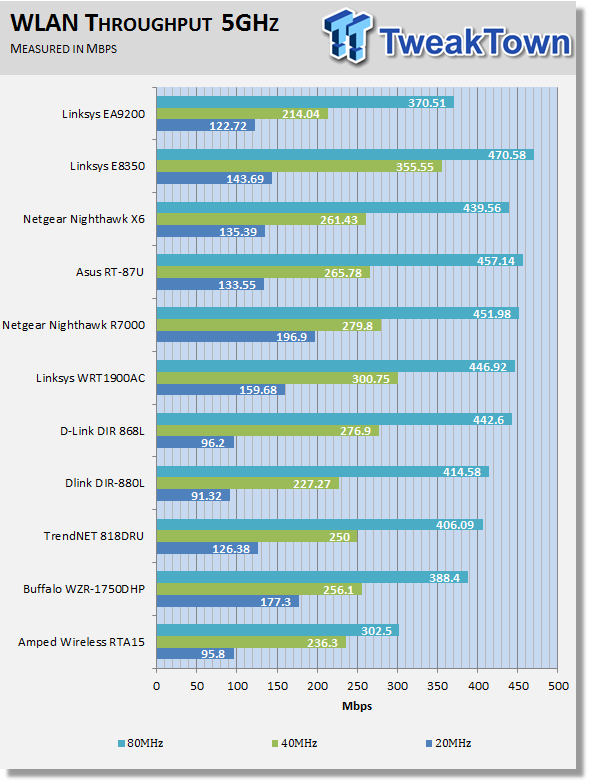 5GHz performance was disappointing as well. While the 20MHz band did well at 122 Mbps, the 40 and 80MHz bands came in at 214 and 370 Mbps respectively, the lowest on our charts next to the RTA15 from Amped Wireless. 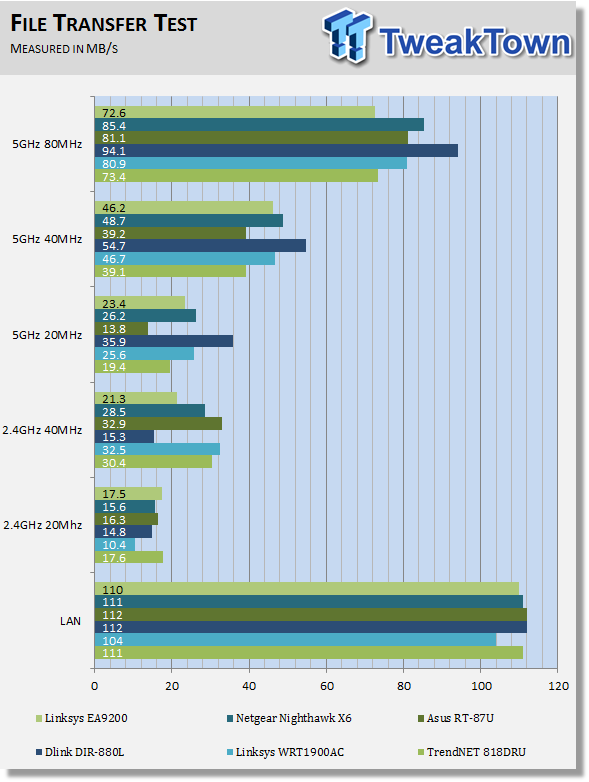 We decided here like the range charts to clean things up and include only the top routers. As you can see, the EA9200 had a great start with file transfer testing, LAN came in at 110 MB/s followed by 17.5 MB/s for the 2.4GHz band. The 5GHz band produced 23.4, 46.2 and 72.6 MB/s for each respective step in the channel width. 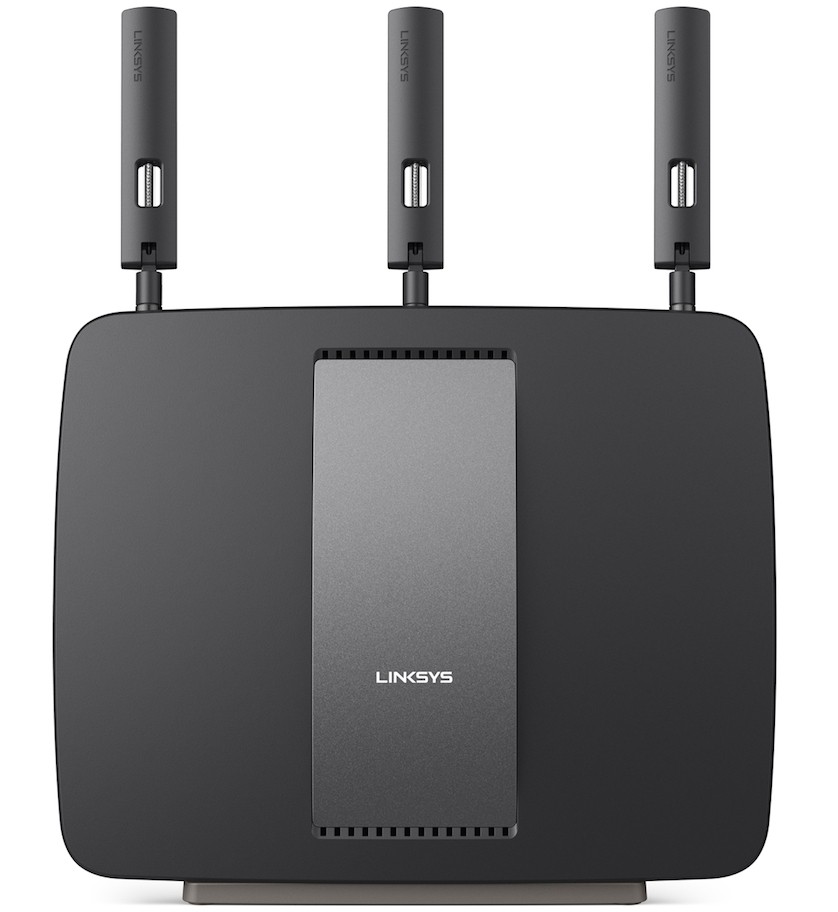 The EA9200, while being the same basic platform as the R8000, was quite surprising in that we didn't find the same performance capabilities that we did when we tested the Nighthawk. Build quality on the other hand was rather good; with the unit being a vertical router, we found the stand to be quite capable of maintaining a steady position and the plastics all fit together properly. The EA9200 isn't quite as hefty as the WRT1900AC, our benchmark when it comes to Linksys routers, but then again, it's not light as a feather either.

Performance of the EA9200 was sadly disappointing, especially when I know what this platform is capable of after testing the Netgear solution. Then again, this could be something that Linksys can fix with upcoming firmware updates. On the other hand, you could revert to third-party firmware when it's available. Throughput for the Linksys EA9200 came in at 937 Mbps in our LAN to LAN testing, while we found the router to peak at 370 Mbps utilizing 802.11AC.

Overall, the Linksys EA9200 is a very well built wireless router solution and what it does lack in performance is possibly something that could be fixed with firmware updates. For consumers that just want the very best Tri-Band solution, you may want to look elsewhere, but if you're looking for a solution where desktop space is at a premium, the EA9200 may be what you are looking for, but the price for what you're getting may scare some away.

PRICING: You can find the Linksys EA9200 AC3200 Tri-Band Smart Wi-Fi Router for sale below. The prices listed are valid at the time of writing but can change at any time. Click the link to see the very latest pricing for the best deal.

The Bottom Line: Linksys' EA9200 wireless router is well built and space saving routing solution, but with less than stellar performance, the $299 MSRP isn't looking too pretty at this point in time.