About a month ago, Synology launched the four bay follow up to the ever popular DS214play. This new network storage solution, dubbed the DS415play, carries over the same hardware platform from the aforementioned DS214play, albeit with two more bays.

The DS415play carries on Synology's commitment to the Intel Evansport platform, including hardware transcoding via the custom ffmpeg implementation, in addition to the ability to stream 1080p to any number of devices.

The DS415play from its inception was built to be the last media server you will need. At the heart of this solution, we have the Intel CE5335 dual-core SoC, paired with 1GB of DDR3. On the rear of the unit, you will find a single gigabit Ethernet port from which Synology says you can achieve 112 MB/s read and 101 MB/s write speeds in RAID 5 within a Windows OS environment.

Being the latest from Synology, the DS415play is backed by the award winning DSM 5.0 NAS operating system. Let's continue on now and take a close look at it. 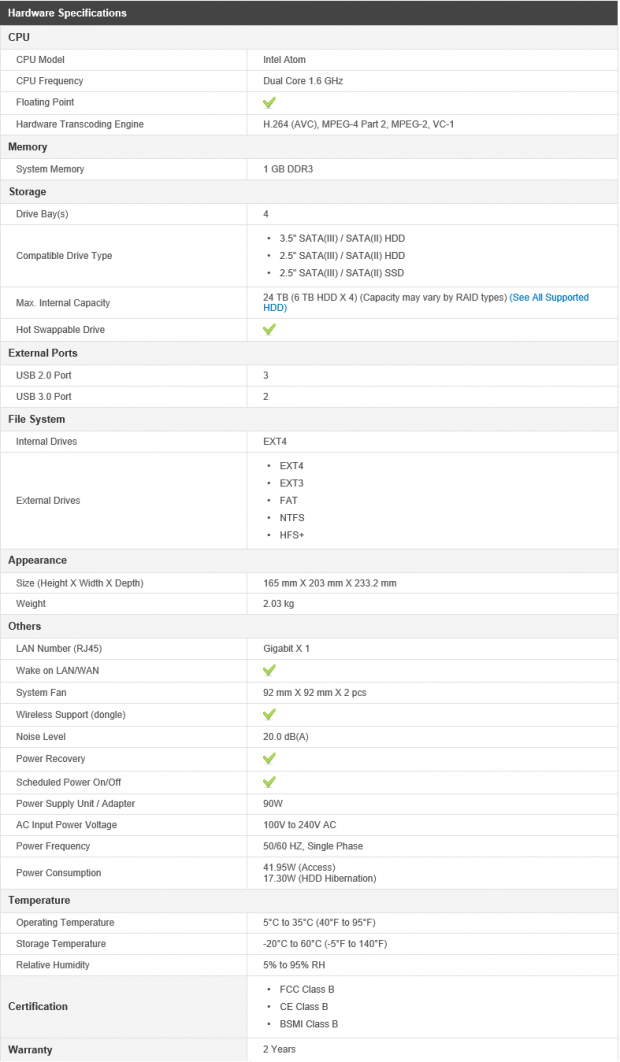 The specifications for the DS415play start with the dual-core Intel Atom, which operates at 1.6GHz. Moving down the list, we find hardware transcoding support for H.264, MPEG4, MPEG2 and VC-1 next to 1GB of DDR3.

Internal capacity for the DS415play peaks out at 24TB via four 6TB HDDs with additional support for EXT4, EXT3, FAT, NTFS and HFS+ via the USB 3.0 ports located on the rear of the unit. 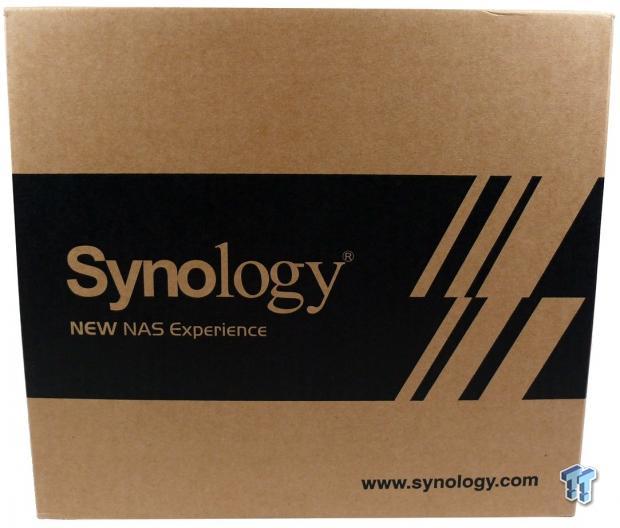 Packaging for the DS415play has the NAS in a brown cardboard box with a simple Synology logo across the front. 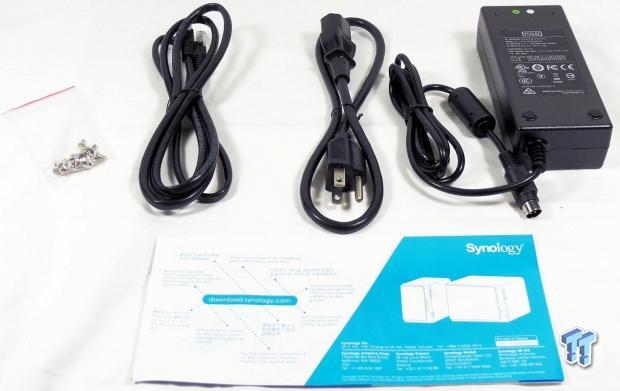 Scope of delivery for the DS415play includes an Ethernet cable, power adapter, and reading materials. 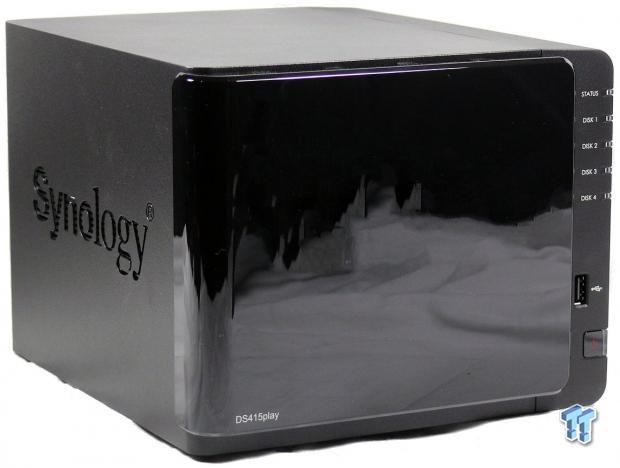 The front of the DS415play carries a glossy black front panel. A small portion of the front is dedicated to activity LEDs which flash green. 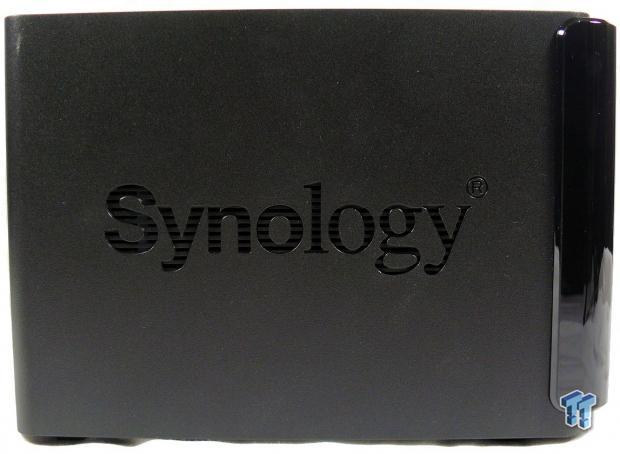 The side of the unit carries an embossed panel with the company logo. 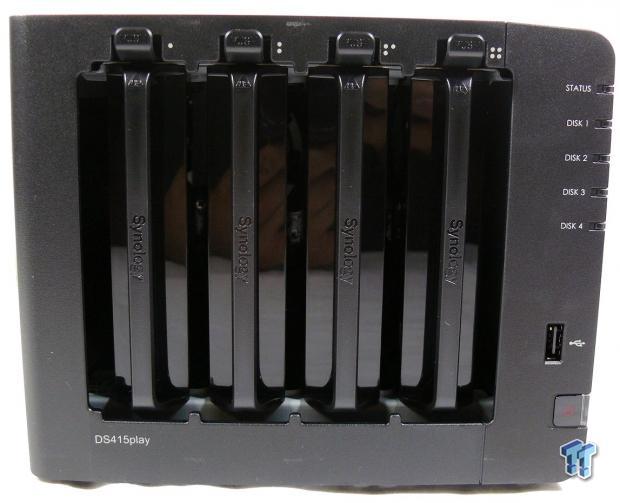 Behind the front panel, we find four tool less drive bays. At the top each bay is numbered with dots. 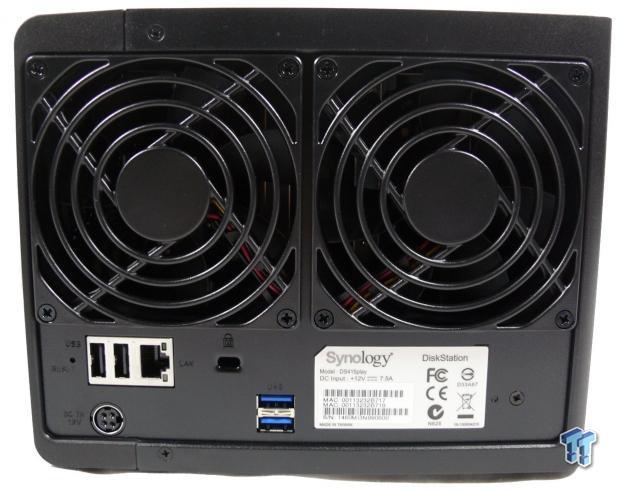 The back of the NAS houses dual 92mm cooling fans, while down below, we have dual USB 2.0 ports next to the gigabit Ethernet port, and another two USB 3.0 ports at the bottom.

To setup the DS415play, we entered the NAS IP into our web browser. From here, the Web Assistant guided us through setup. 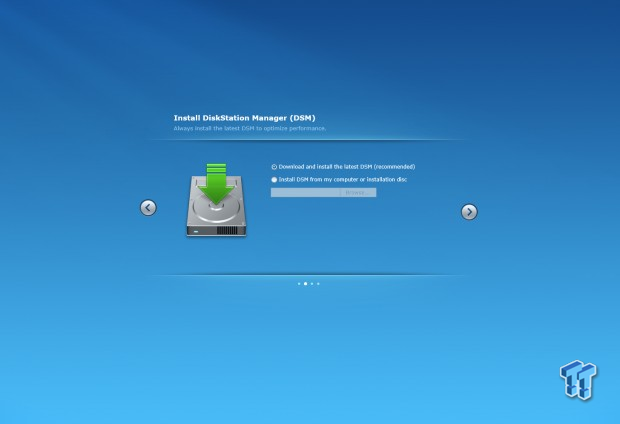 The first step for setup was to download the latest DSM from the web or navigate to a previously downloaded installation. 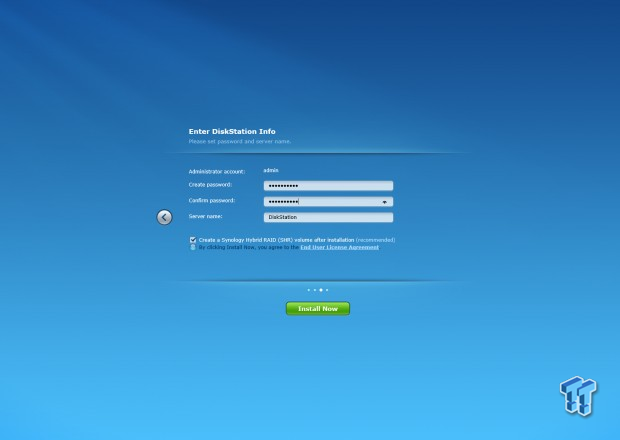 We then created a password for our DSM installation and named our server. 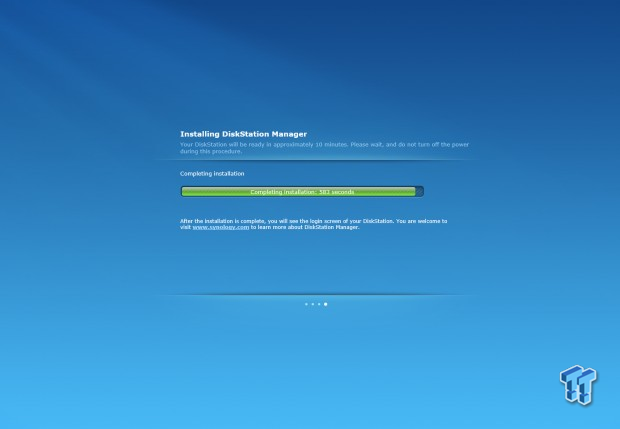 DSM took 10 to 15 minutes to download and install on our DS415play. Of course, your results will vary depending on your internet connection speed. 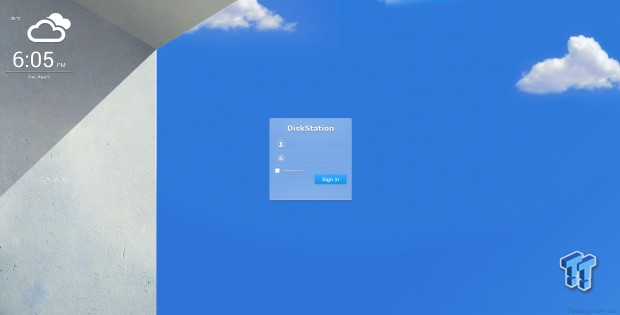 After setup was complete, we landed at the main menu to login to our DS415play. 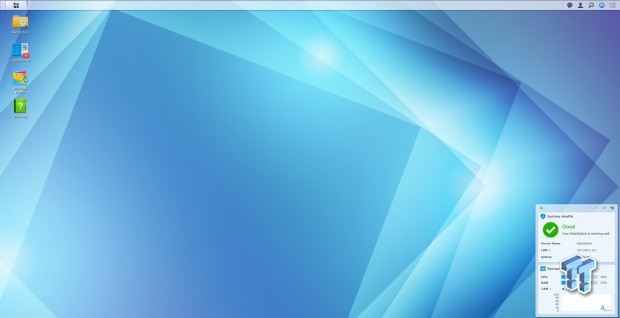 The main menu for the NAS carries a rather clean appearance. At the top left, we have a few icons for shortcuts to the File Station, Control Panel and Package Center. However, mousing over to the logo in the very top left corner loads a more in depth menu.

Expanding the corner button menu, we have options to configure storage, backups and replication, along with a resource monitor.

Our Consumer NAS test 'system' is setup similar to what you have at home. Here we have the base of a GIGABYTE Z97X UD7 TH, housing an Intel Core i7 4770 with 16GB of RAM supporting. Our operating system of choice is Windows 8 x64 Enterprise, with all available updates and patches installed on a pair of Samsung 840 SSDs.

On the networking side, we utilized the Intel PRO1000 PT Server Adapter with a direct connection to each NAS appliance. This eliminates the need for a switch, and any bottlenecks that may occur. 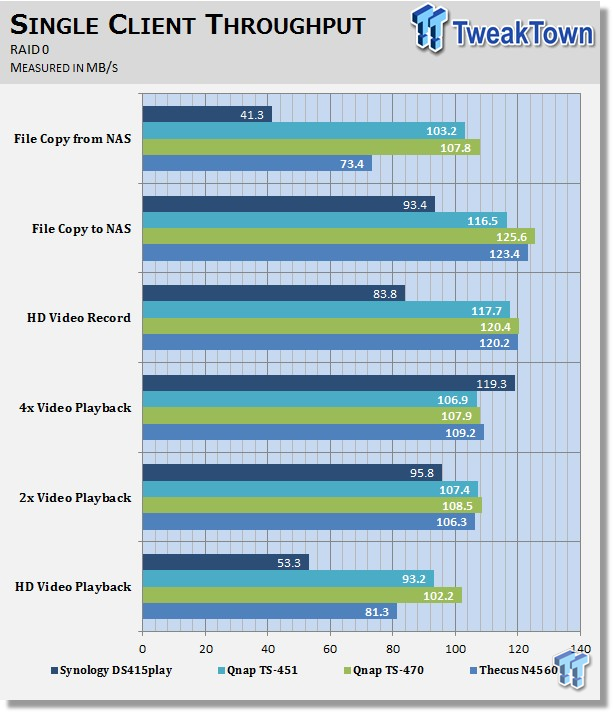 Single client results for the DS415play started off with the NAS scaling through the Video Playback quite well. File copy operations to the NAS came in at 93.4 MB/s. 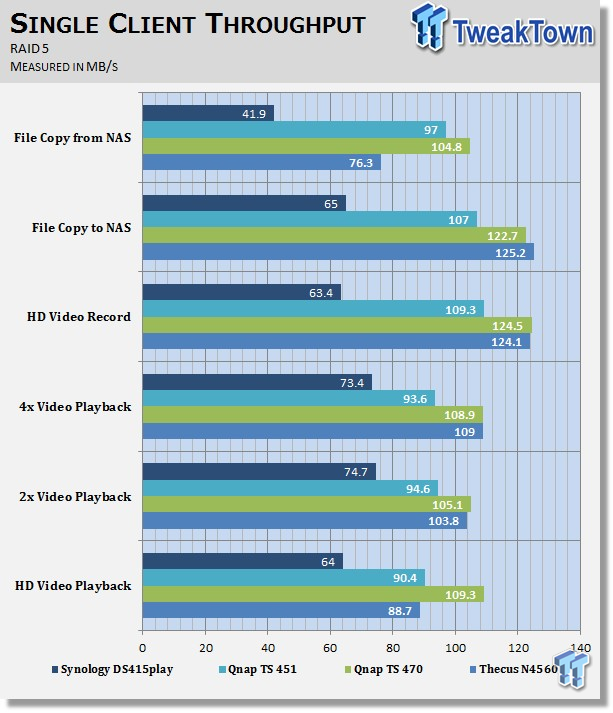 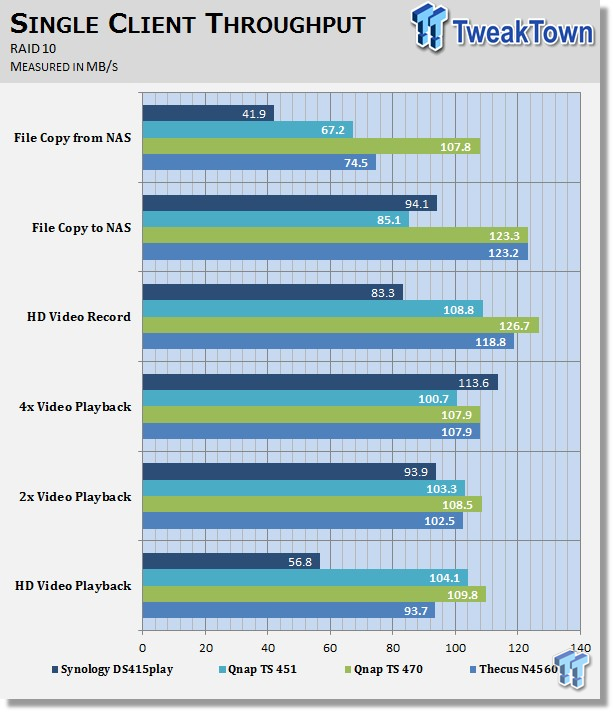 RAID 10 picked up where the RAID 0 left off. Here we found results at 113 MB/s for 4x playback, while file copy operations came in at 94 MB/s to the NAS.

Our Sequential read/write workload is centered on 128K transfer sizes; again, with sixteen threads, and a Queue Depth of 8. 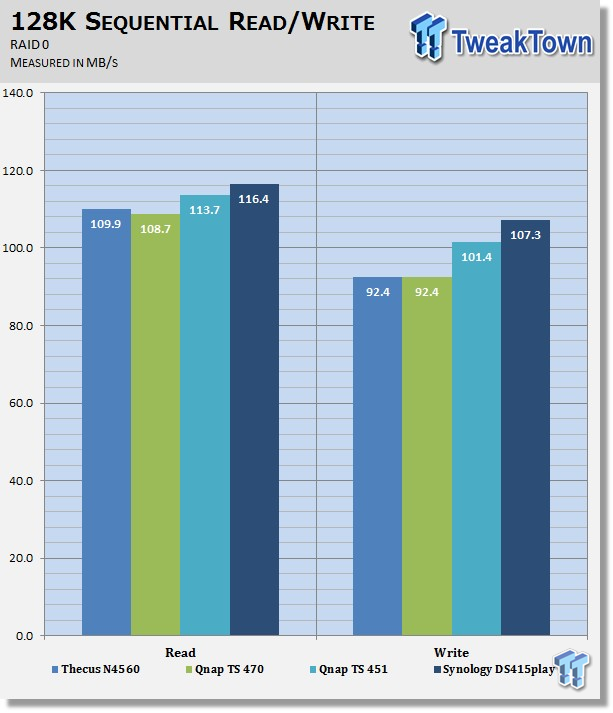 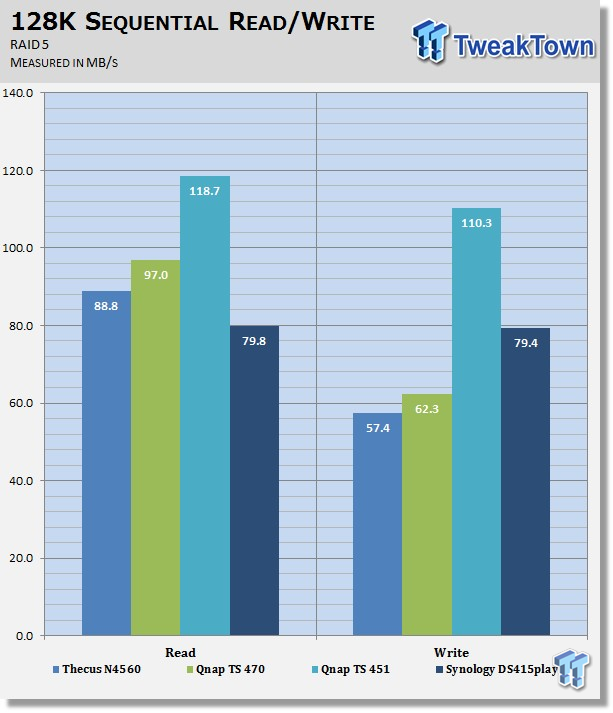 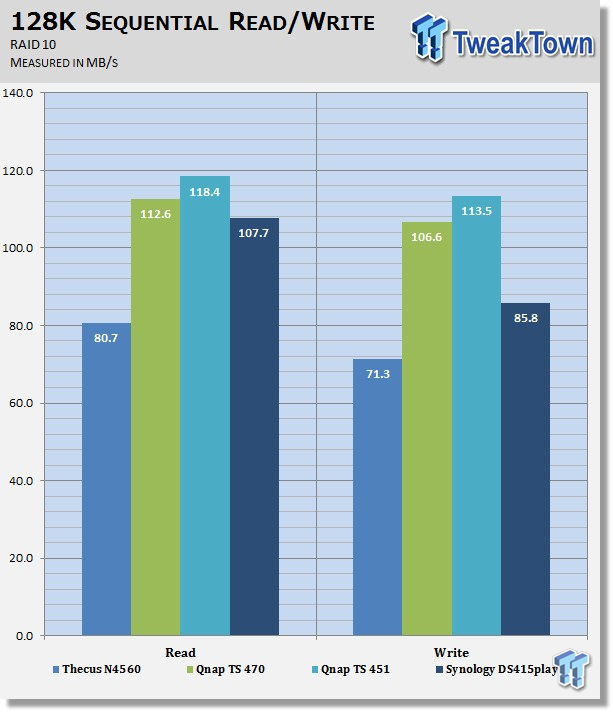 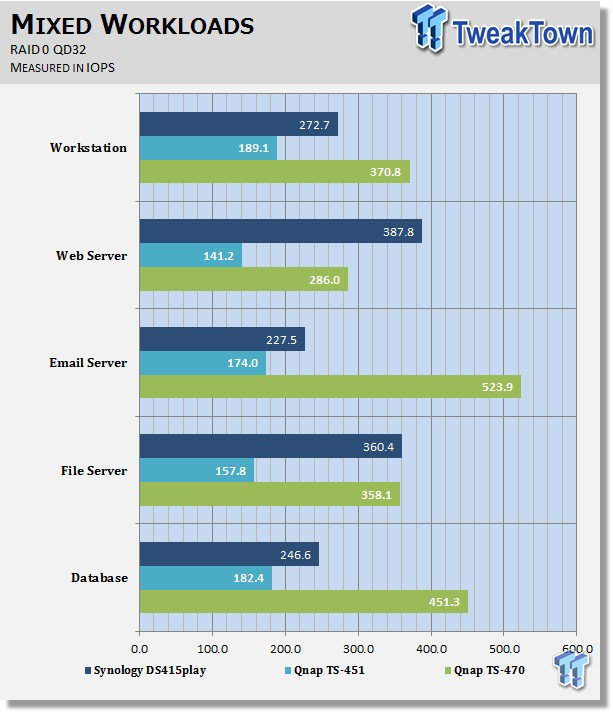 Mixed workloads showed the DS415play doing the best with Web Server at 387 IOPS. 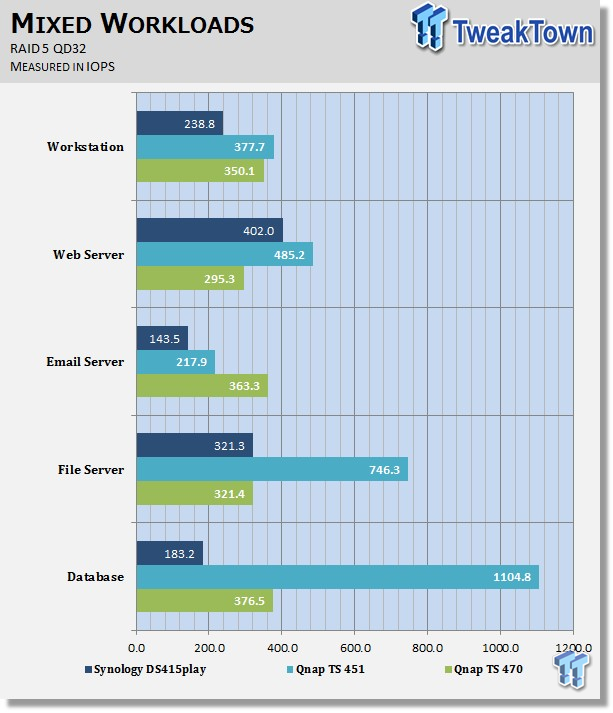 Moving to RAID 5, the Synology once again did quite well with Web Server at 402 IOPS. 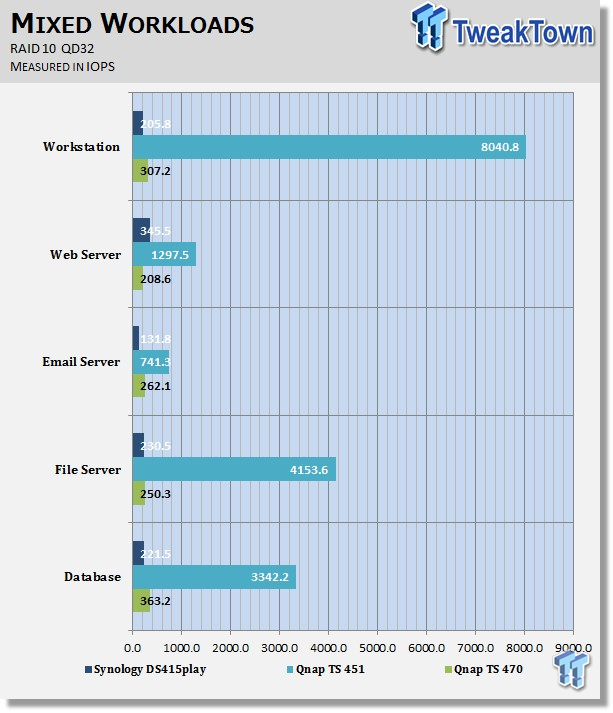 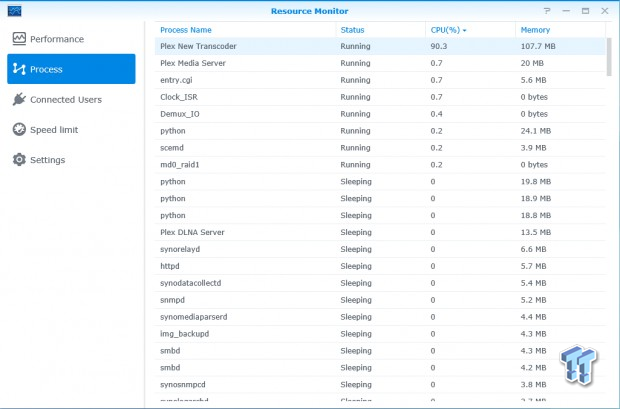 The Synology DS415play, while being my first foray into the world of DSM, leaves a good impression. I enjoyed the layout of the Web GUI or DSM 5.0 rather. While it certainly takes some getting used to if you're moving from another NAS vendor, the ease of use goes quite far in aiding the process.

As many of you know, the big advantage of the Intel Evansport platform is the hardware transcoding feature built into the SoC. Of course, this plays into the hands of the people over at Plex, one of largest and most popular media servers available to support the feature. As of today, as you can see in the image above with CPU usage upwards of 90%, it is not supported. 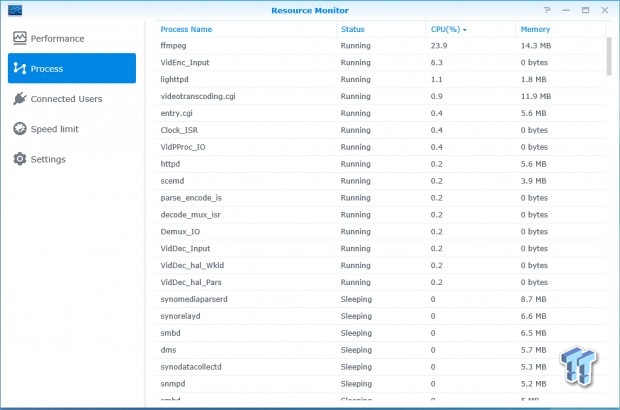 Not all is lost though, as Synology has taken the issue upon themselves and enabled a custom build of ffmpeg to allow hardware transcoding on their own platform. Judging from the image above, and the noticeable improvement on CPU usage down to 23%, we can say it works quite well. 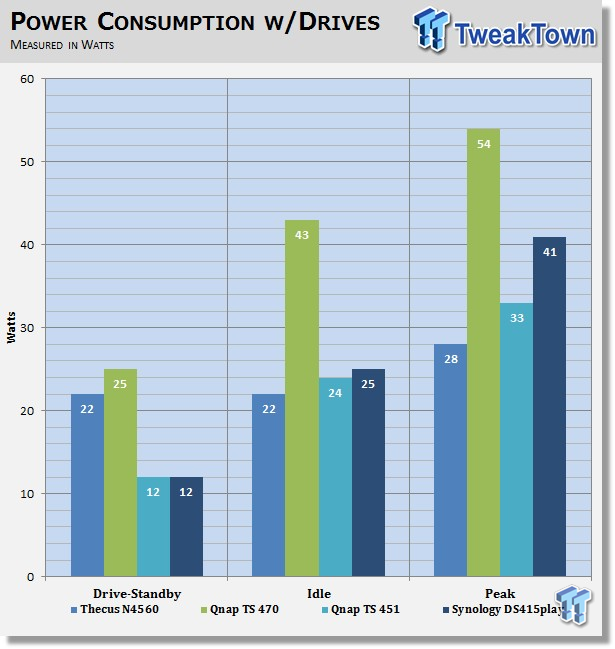 Performance of the DS415play was quite good, and while it didn't top the charts in all instances, we did manage to get some really good numbers from our sequential testing. Perhaps, one of the more intriguing characteristics of the DS415play is its power consumption figures. In testing, we measured a peak of 41 watts during the single client testing, while at idle the Synology unit was able to calm to a nice 25 watts at idle. Of course, this is with WD Red 4TB drives, and your results will depend severely on what hard disk drives are used.

Overall, the Synology DS415play is great solution for those wanting the option for 24TB of storage capacity, along with the ability to transcode and stream media on-the-fly at 1080p, something not all vendors in the market can provide at this point in time. 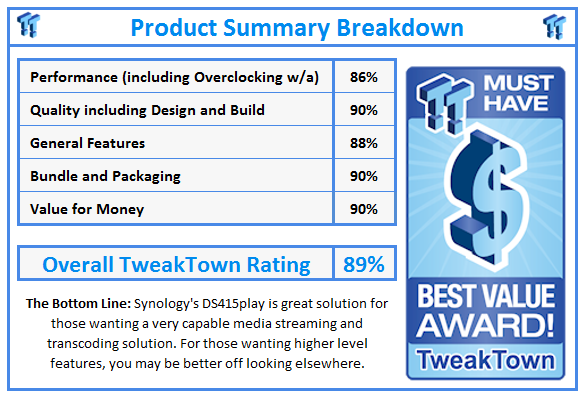