With the launch of the world's highest capacity purpose-built NAS storage solution in the 6TB Red, WD at the same has also launched a new lineup dubbed the WD Red Pro. The WD Red Pro is built from the ground up for medium to large business NAS market, with a focus on eight to sixteen bay appliances.

Moving away from the traditional IntelliPower design found in previous Red solutions, WD has given the Red Pro a 7200 RPM spindle speed, coupled with 64MB of cache. 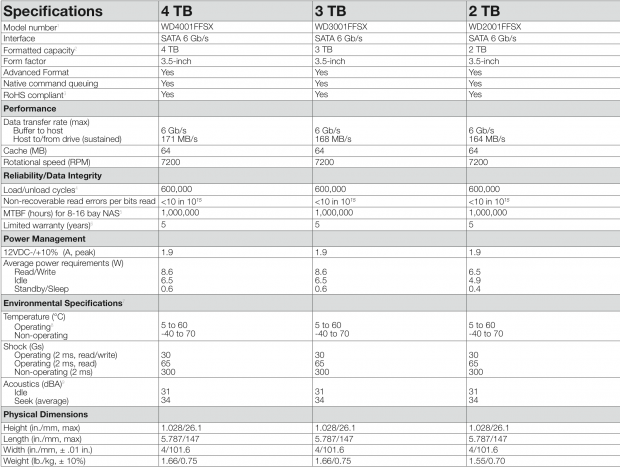 Further down the list, we find a sustained data rate of 171 MB/s, next to the 64MB cache and 7200 RPM spindle speed. The drive features a load/unload cycle count of 600K with a MTBF of one million hours.

Power consumption for the drive comes in with an average of 8.6 watts during read/write activity, while idle and sleep are listed at 6.5 and 0.6, respectively. The MSRP of the WD Red Pro in the 4TB capacity is set at $259.99. In addition to this, WD has released a 2TB capacity for $159.99 and 3TB capacity for $199.99, all of these drives carry a five-year warranty.

PRICING: You can find the Western Digital Red Pro 4TB NAS Hard Drive for sale below. The prices listed are valid at the time of writing but can change at any time. Click the link to see the very latest pricing for the best deal. 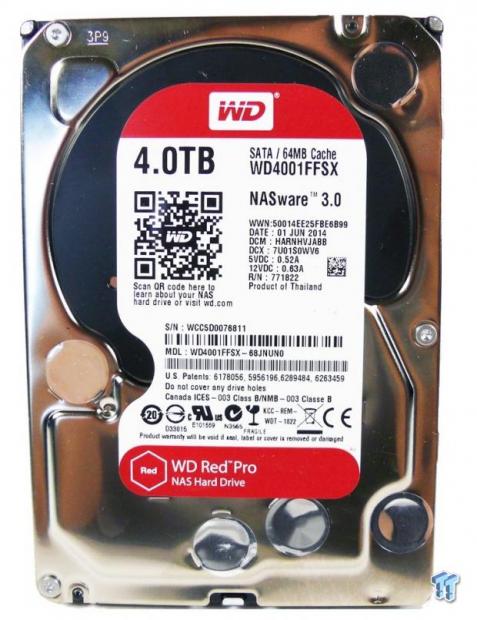 The WD Red Pro carries on the same aesthetics as the Red. We have the capacity listed at the top with the drive model and cache amount displayed to the right.

The drives SATA power and data connectors are lined up correctly, so there should be no issues with hot swap trays. 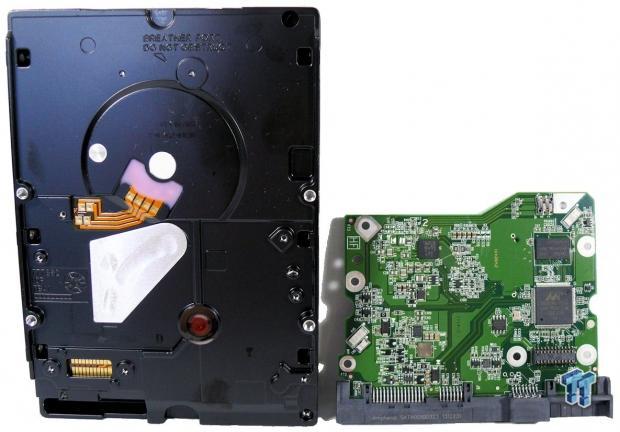 Here we look at the drive with the PCB removed. The WD Red Pro 4TB uses a new design where part of the connections are housed under or inside the platter tray. 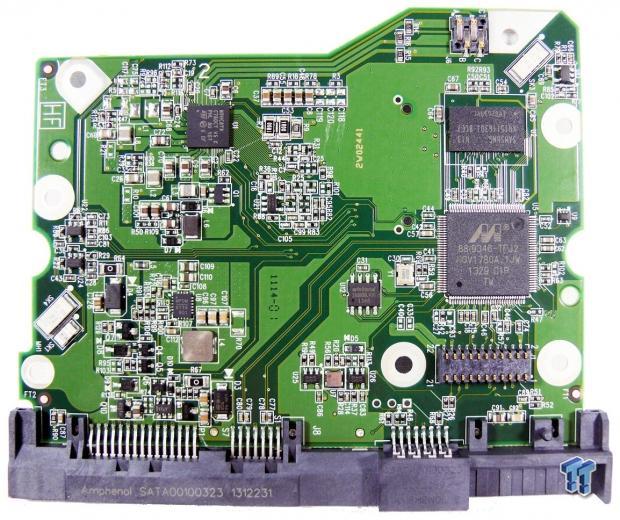 Above, we have the PCB removed from the drive where we get a look at the Marvell controller in the center, followed by 64MB of Samsung DRAM for the cache and WDHC8TD motor driver. 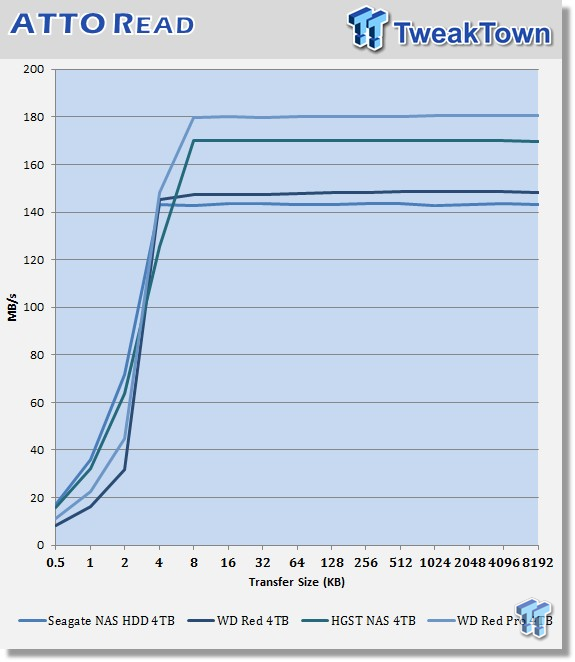 In ATTO read testing, the WD Red Pro shot above competing solutions. At its peak the drive touched 180 MB/s. 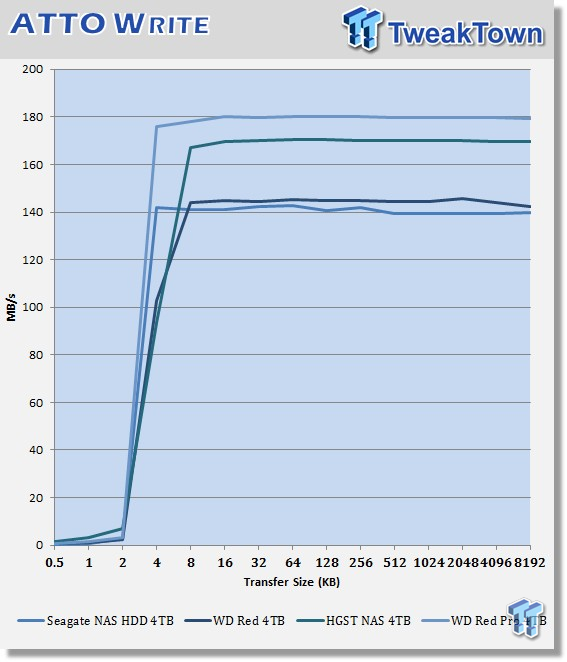 Write performance was quite similar, where we found the drive touching 180 MB/s once again. 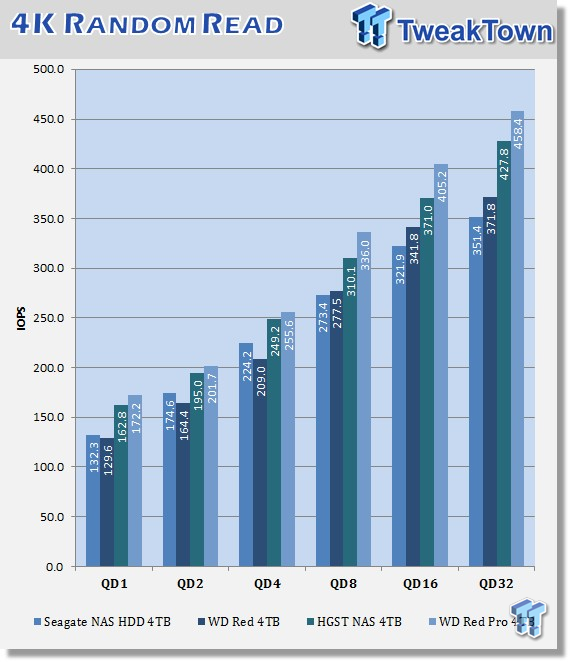 Here we pushed on to Random read where we found the Red Pro top the charts again. At QD32, we found the drive bringing 458 IOPS to the table. 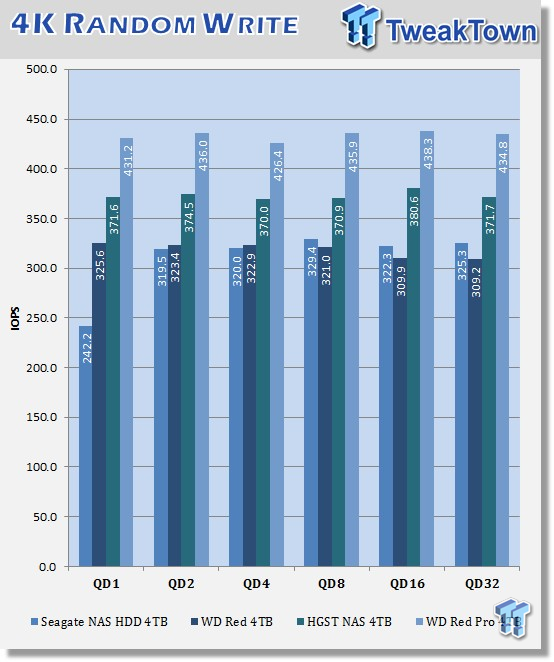 Random write had the Red Pro giving nearly 430 IOPS across the board. 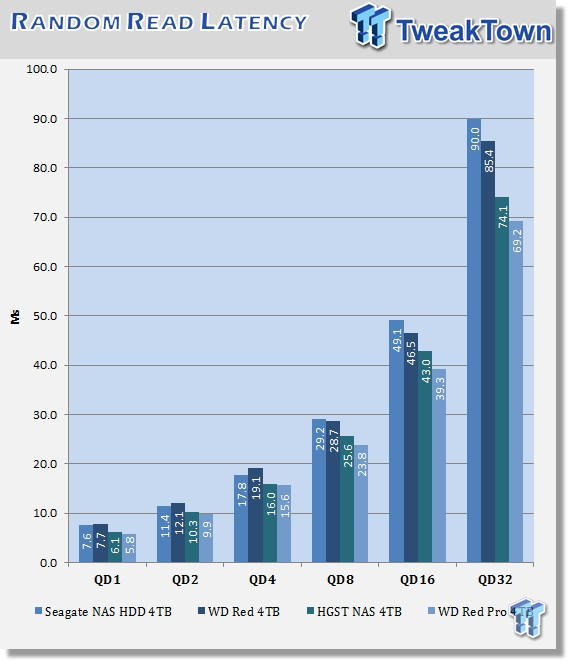 With the Red Pro being the quickest on randoms, it was no surprise to see it have the lowest latency either. As you can see, it was quite a bit quicker than the Red 4TB with the nearest drive being the HGST NAS. 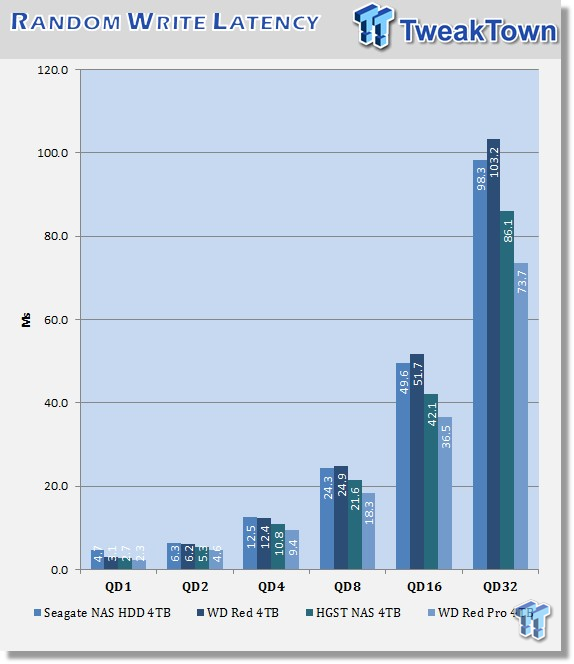 Random write latency was more of the same story as expected. The nearest solution, the HGST NAS, was 13ms slower than the Red Pro at QD32. 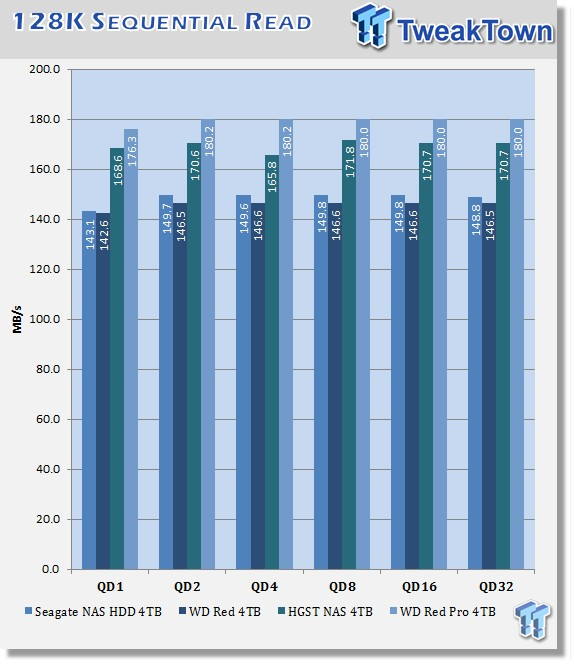 Moving on, we tested the sequential performance of the Red Pro. Here, as we found in ATTO, the drive performed quite well. At its peak, the drive reached 180 MB/s flat. 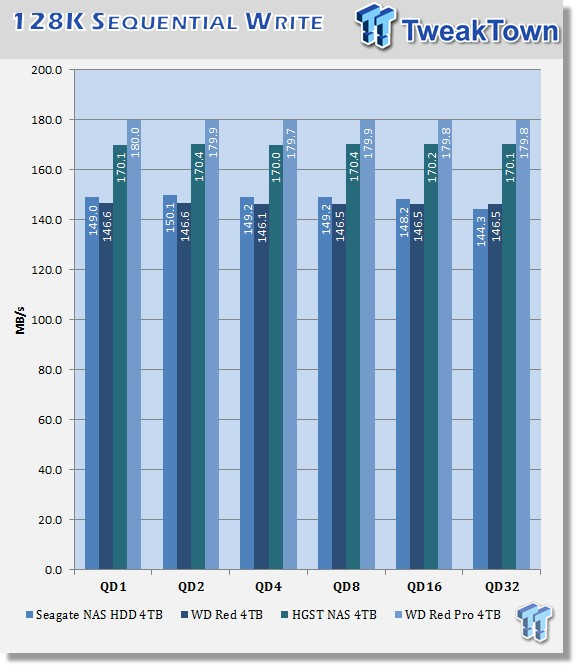 Sequential write was more of the same song and dance. The Red Pro bested all competitors' solutions at 180 MB/s. 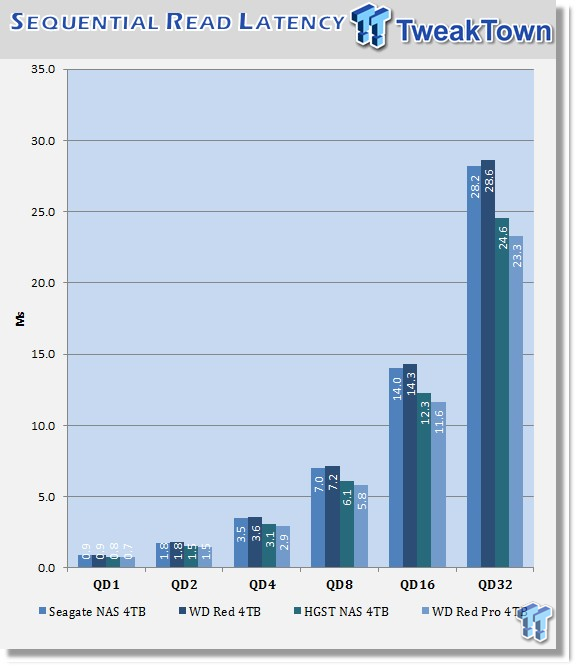 Peak read latency came in at 23.2ms, 5ms quicker than the original Red. 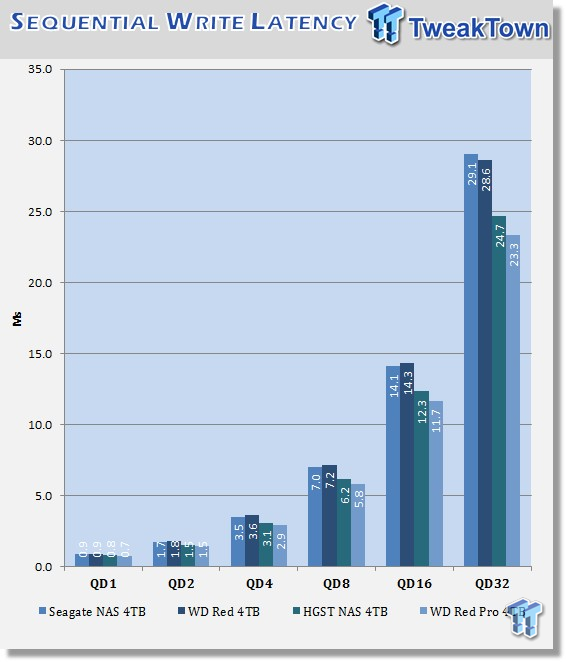 Write latency was on point at 23ms once again. 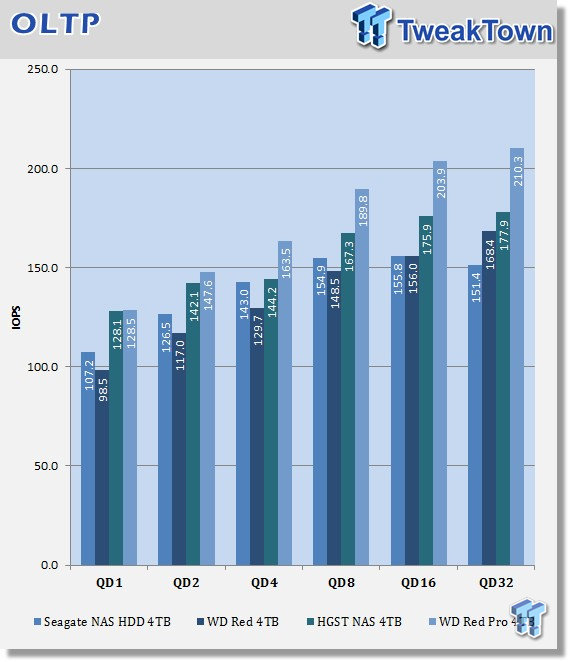 Moving on to our workloads, the Red Pro was 33 IOPS quicker than the HGST NAS solution. 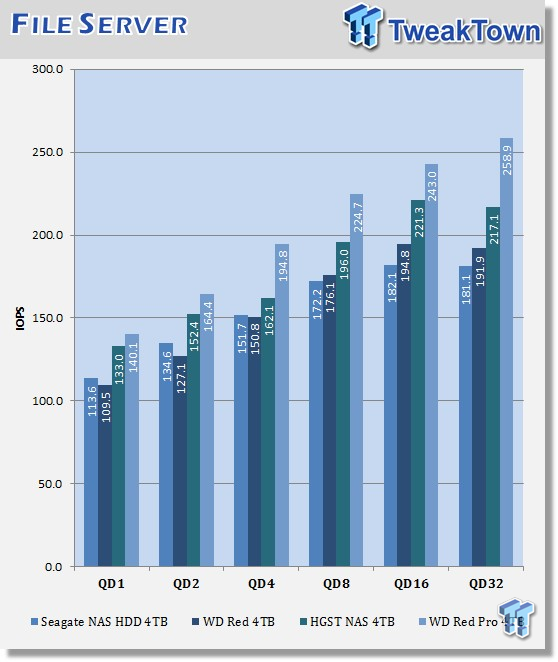 File Server proved the Red Pro was ready for workloads, coming in at 259 IOPS at QD32. 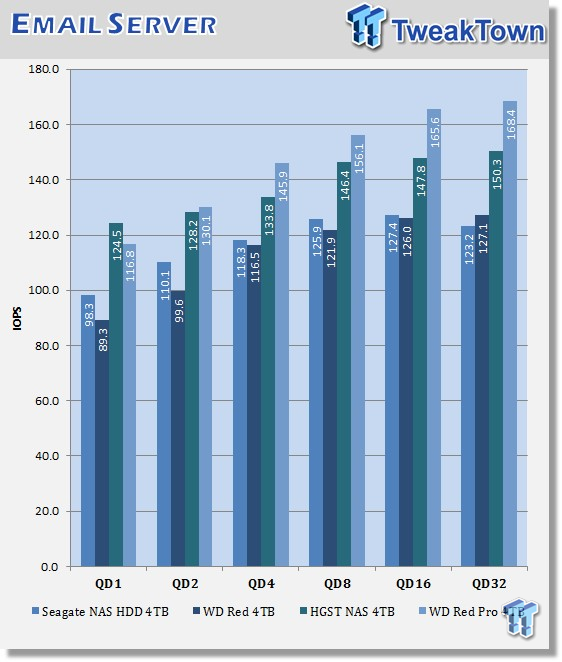 Email server furthered the experience with the 4TB Red Pro pulling in 168 IOPS at QD32. 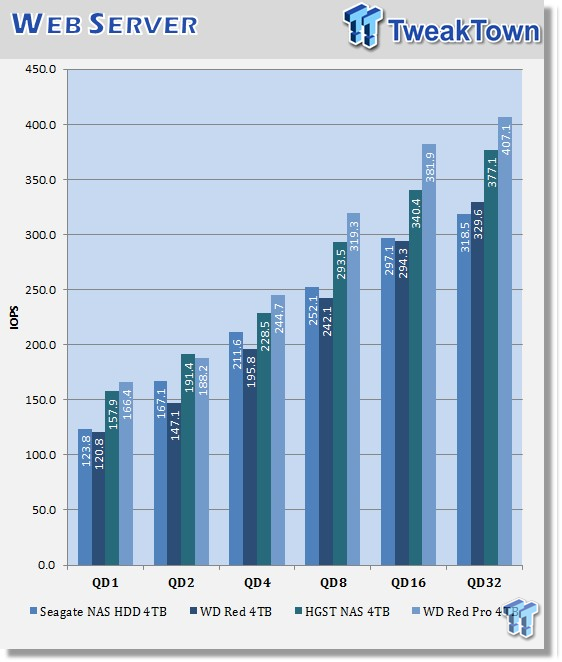 Web Server maintained the momentum for the Red Pro. Here we touched 407 IOPS at QD32. 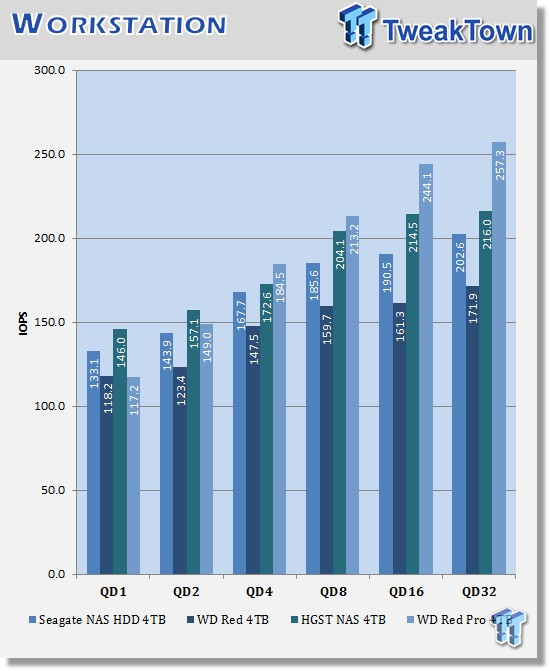 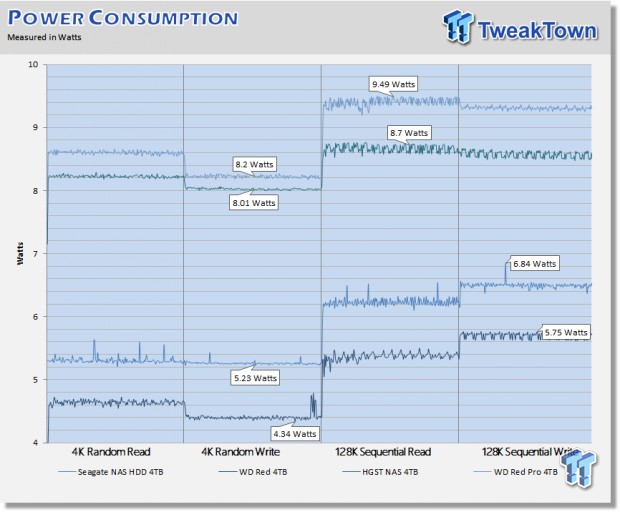 Looking at our consumer workload, the WD Red Pro had a low of 8.2 watts during random write, and a high of 9.49 watts during sequential read. 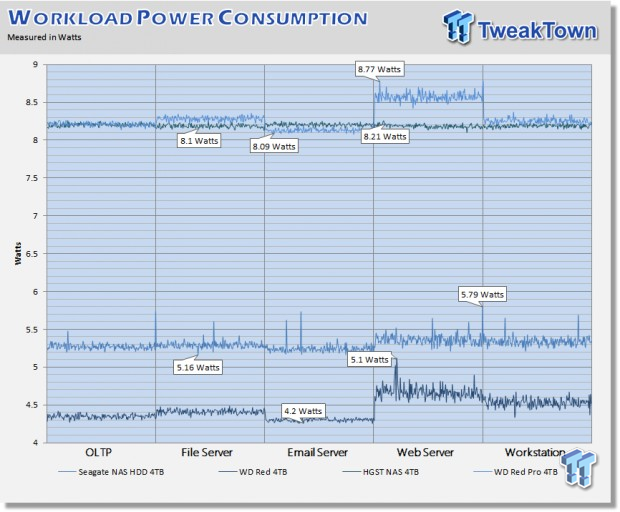 Our mixed workload power testing showed more linear power consumption for the Red Pro. Here we had a low of 8.09 watts and a high of 8.77 watts. 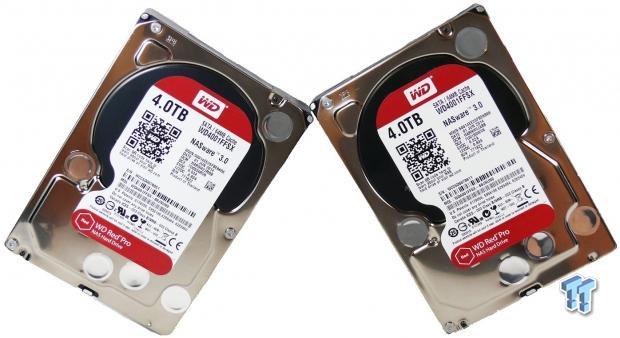 Throughout testing, the WD Red Pro shined, and as I was putting the charts together for this review, I began to get a grin on my face as the columns shot up and the performance of the Red Pro topped everything previously tested. In sequential testing, the drive was right at 180 MB/s no matter what benchmark I used, and random read and write performance hovered around 450 IOPS.

Mixed workloads were a breeze for the Red Pro as it chewed those up as if it was out for a Sunday spin. Over on the power side of things, the WD Red Pro did use a bit more power than other solutions, especially since NAS catered solutions typically use ~5900 RPM spindle speeds.

For comparison, we threw the HGST NAS 4TB in the charts, since that is the only other purpose-built solution to use a 7200 RPM spindle speed. As you could see in our charts, the WD Red Pro used 0.2 watts more in random writes than the HGST NAS, despite producing 60 more IOPS at QD32.

Looking at workload power consumption with email server, the WD Red Pro manages to use less power than the HGST NAS, while still producing more IOPS.

The WD Red Pro is the second part of the one two punch for Western Digital in recent days. Where the 6TB Red ushered in tremendous storage capacity in a purpose-built solution, the Red Pro is the end all, be all of performance in NAS appliances.

PRICING: You can find the Western Digital Red Pro 4TB NAS Hard Drive for sale below. The prices listed are valid at the time of writing but can change at any time. Click the link to see the very latest pricing for the best deal. 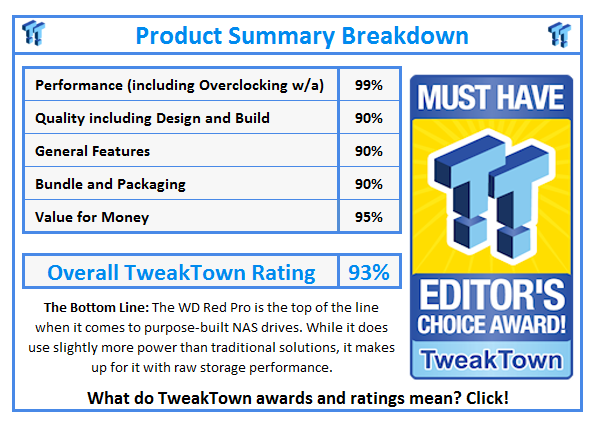