Over the past few months, Seagate has been hard at work bringing higher capacity drives to the enterprise sector. With the expansion of their portfolio to include five and six terabyte models, these drives have now started to trickle down to consumers.

The ST6000DX000 is Seagate's first consumer 6TB hard drive to hit the market. Like the 6TB Enterprise Capacity v4, the Desktop variant includes the same six-platter design with an increase in areal density up to 643 Gbits/ square-inch. This along with a hefty 128MB of multi-segmented cache and 7200 RPM spindle speed gives the new Desktop HDD 6000GB a performance advantage over the previous 3 and 4TB models.

With that said, it should be noted that this drive in its bare form isn't available on the market. When doing a bit of research it appears this drive doesn't exist at all. However, you can get your hands-on the Desktop HDD 6TB in kit form at many online retailers. 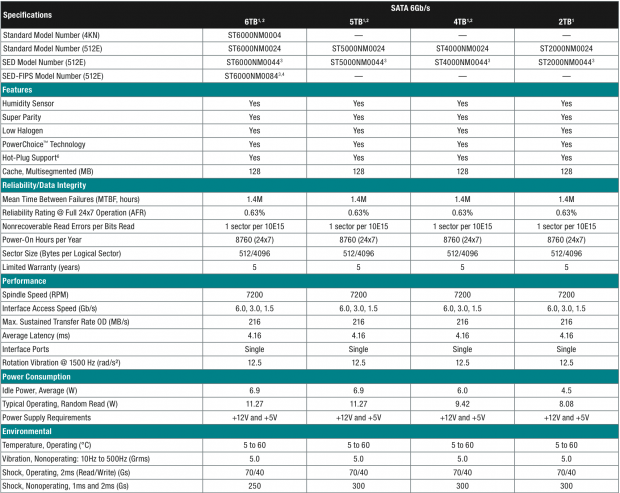 As stated above, this drive, if we go by the model number ST6000DX000, which is printed on our drive, this unit doesn't exist on the market at this time. However, if we put two and two together we can get an idea of the specifications of this drive. Looking at the above image, of the Enterprise Capacity v4 specifications we can deduce that our consumer model carries similar features. Of course the nonrecoverable read errors per bit read will be 10^14 instead of the 10^15 listed for the Enterprise model. Warranty for this drive, as expected will be the standard two-years Seagate places on all consumer drives.

The Seagate Desktop HDD 6TB in kit form carries an MSRP of $299.99 with a two-year warranty. 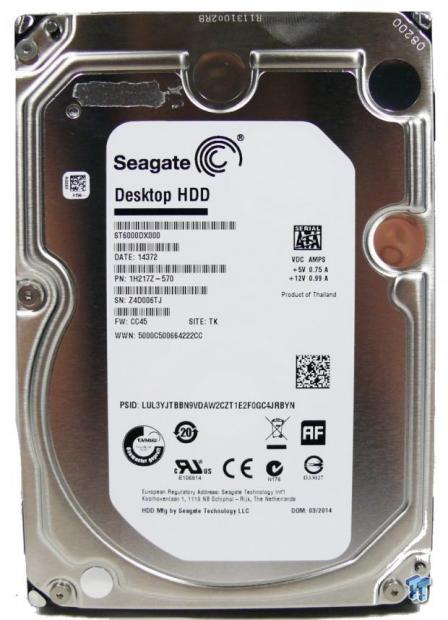 The drive we have in house is an OEM branded Desktop HDD. As you can notice the capacity of the drive isn't listed, but the model number bares no secrets that this is a 6TB hard drive. 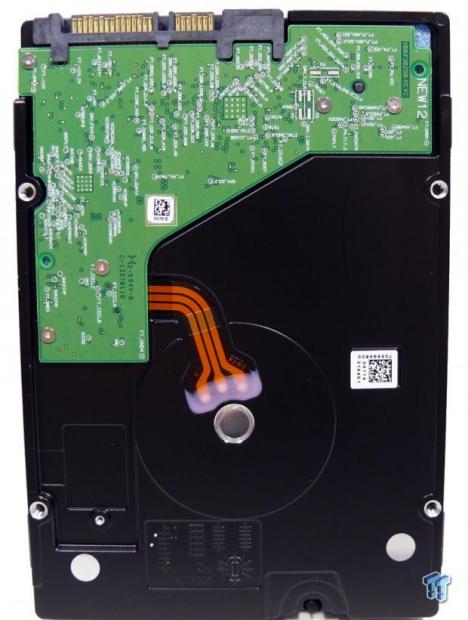 The back of the drive carries the typical green PCB. 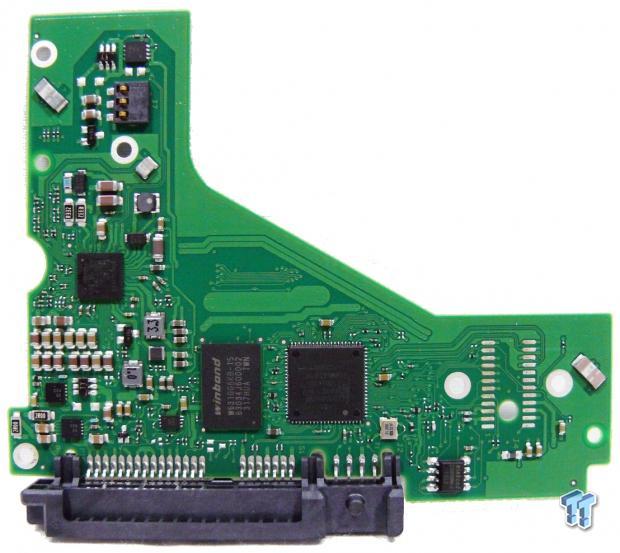 The PCB houses the LSI branded controller and Smooth branded motor driver. We have 128MB of Winbond DRAM to the right.

Here we have the SATA data and power correctly aligned, so no issues there. 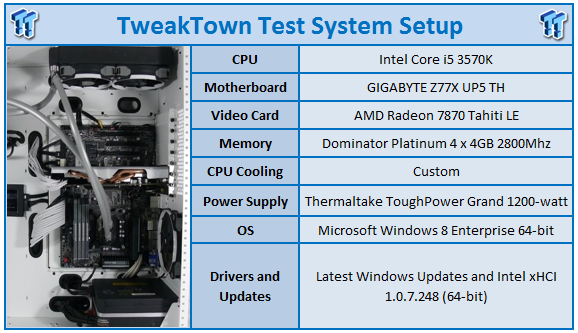 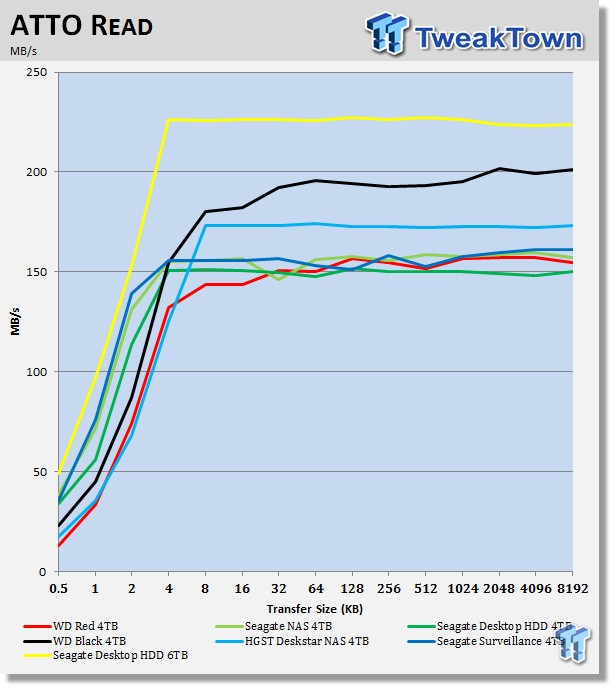 In our baseline testing, the Desktop HDD did quite well, even pushing past the mark set by the WD Black a few months back. The Seagate 6TB peaked at 230 MB/s. 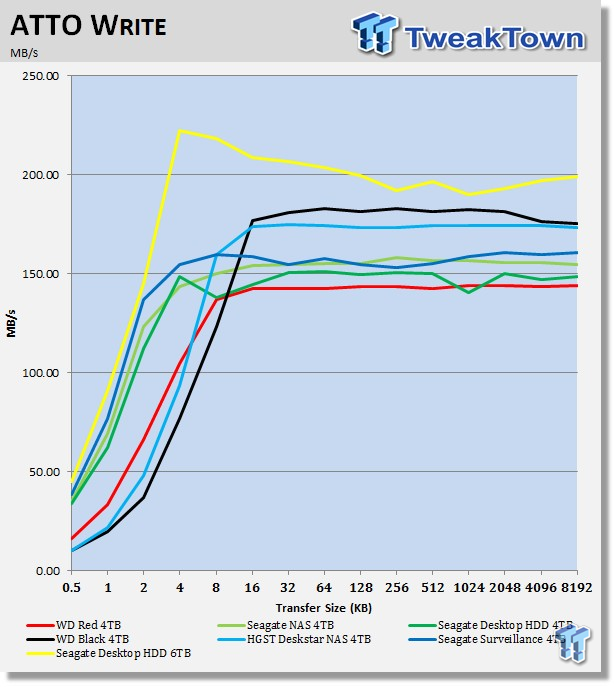 Write testing pushed the Seagate past the WD Black once again. 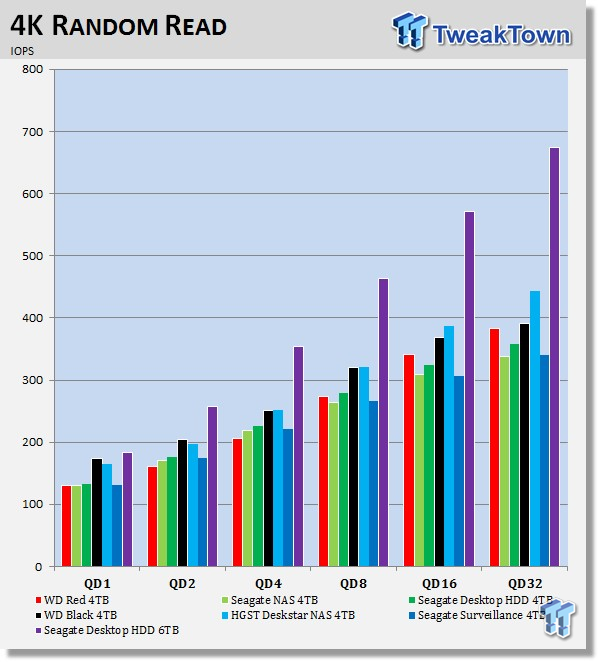 4K random read gives us an idea on how well the 6TB scales with QD. As you can see this drive is a whole new animal when it comes to HDD performance. 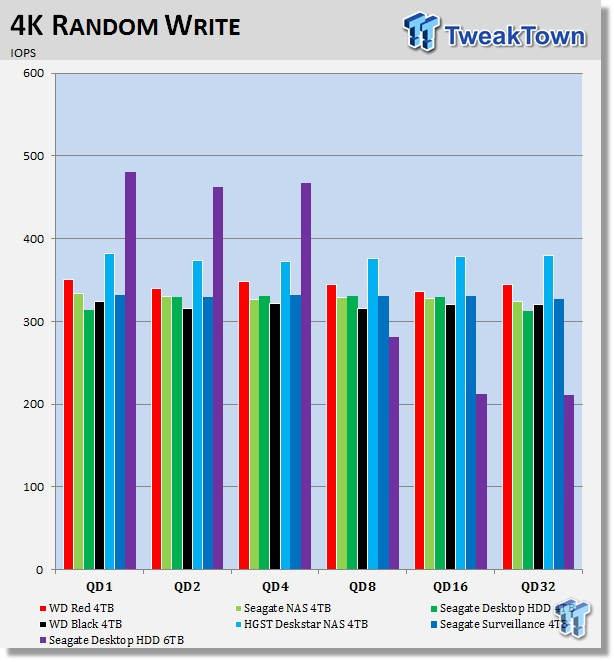 With 4K random write, things were a bit odd we started out quite good and then it appears the drives cache was depleted and we lost performance. 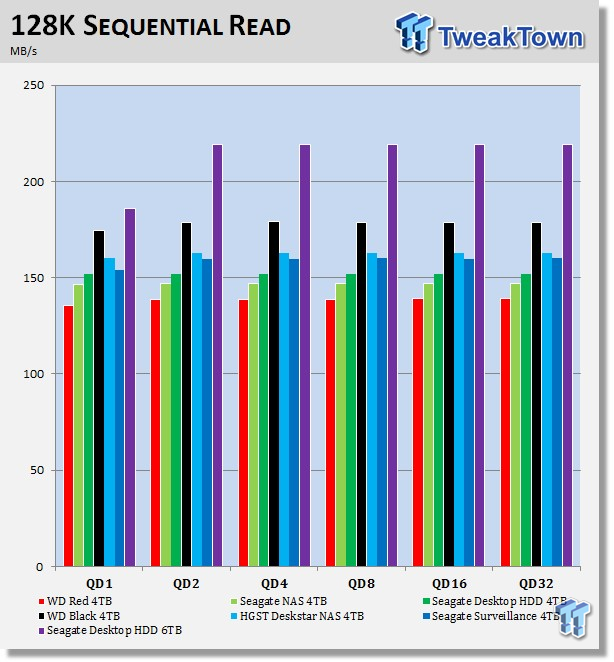 Sequential results separated the Desktop HDD from our previous top drive, the WD Black. As you can see the Seagate was able to top 220 MB/s across the QD scale. 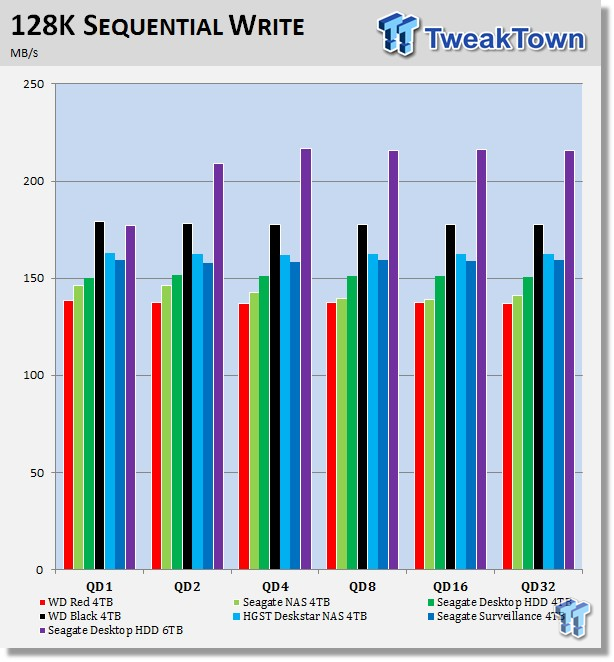 Sequential write again had the Desktop HDD rather consistent through QD32. 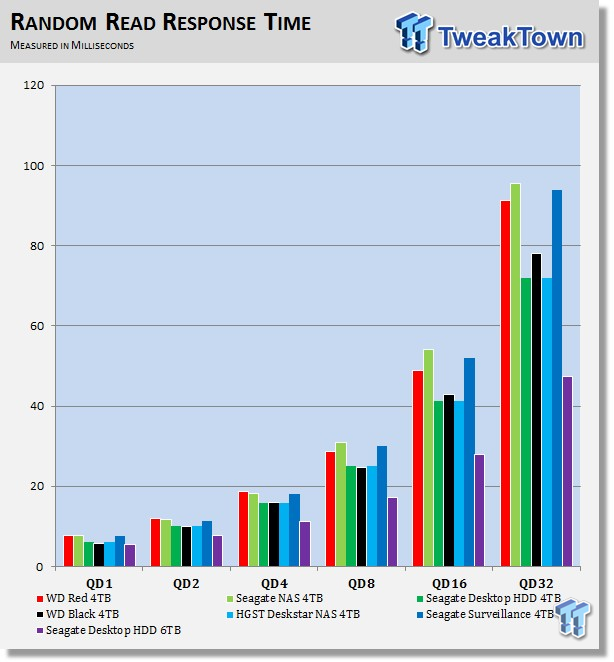 Random read response time for the Desktop HDD had the drive in the top spot. At QD32 you can see the drive was much quicker than the rest of the test field. 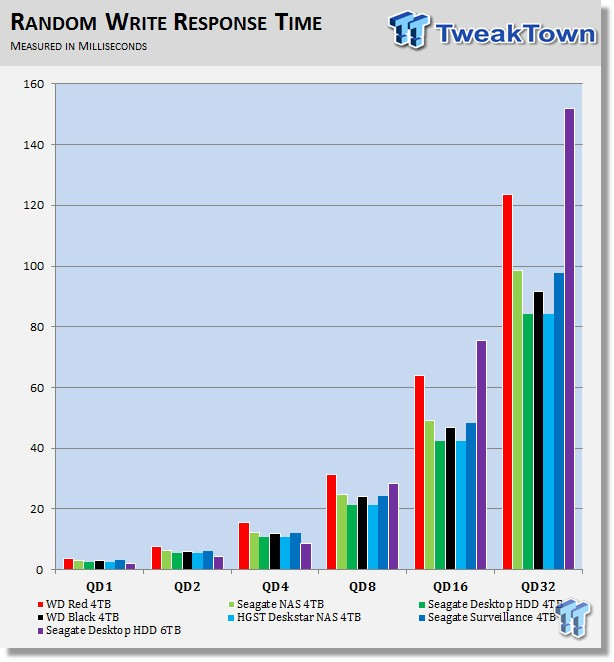 Random write flips the table and the Seagate Desktop HDD becomes the slowest drive in the chart. 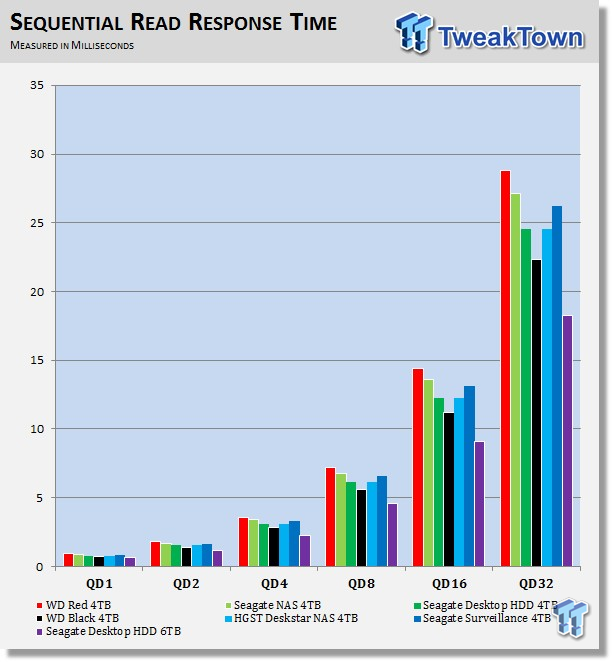 Moving over to sequential response times, the Desktop bounced back and reclaimed top honors. 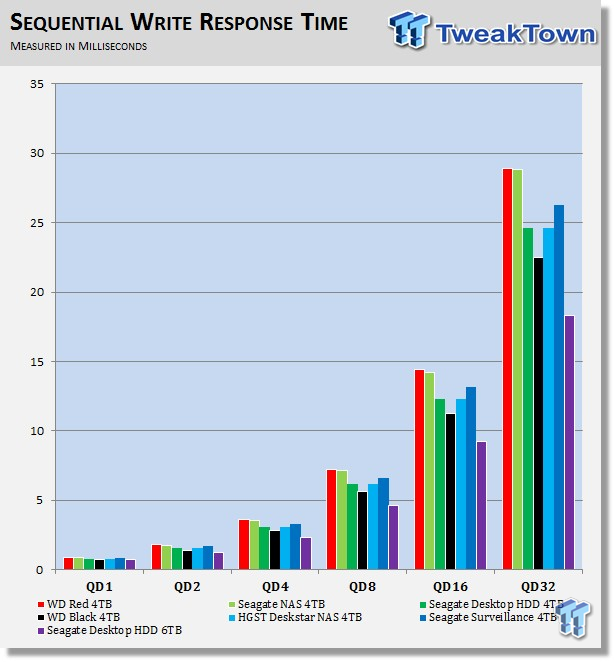 In sequential write response, the 6TB Desktop showed similar results to sequential read. Here we have the drive as the quickest in the charts. 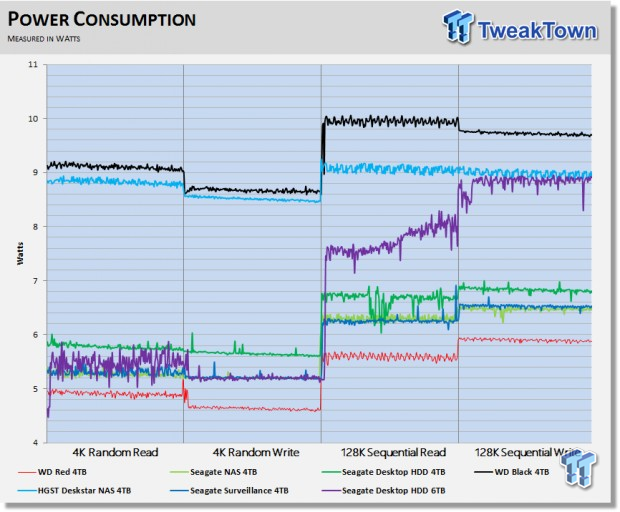 Power consumption for the 6TB Desktop HDD was right with the NAS and Surveillance drives through random read and write, but ramped up to near 9 watts during sequential write. 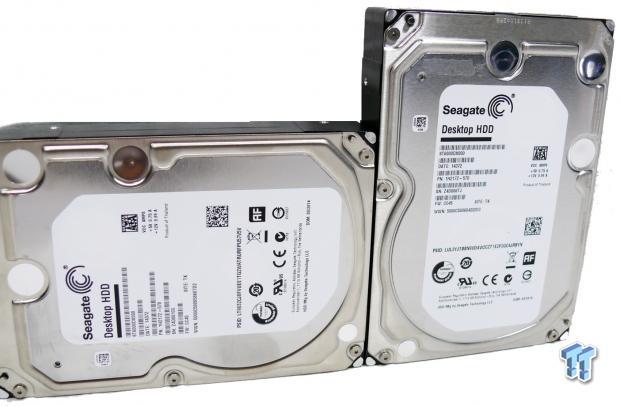 The Seagate Desktop HDD 6TB is one of the most impressive drives when it comes to performance. Apart from the hiccups seen in random write workloads the drive really cements itself as the performance leader in the consumer market. Putting this drive up against all the 4TB solutions we have seen over the last year and half, I was pleasantly surprised to see it surge past the performance of the WD Black and yet do it using less power.

Build quality of the drive seems to be quite good, there were no workload stopping clicks or crashes during testing. Though during testing I did notice this drive does get a bit on the hot side, so it would be a good idea make sure you have adequate airflow for operation. Then who can blame it, it does have six platters spinning at 7200 RPM inside.

With those six platters I also assumed there would be a bit more noise to the drive, but remarkably it was a pretty silent solution. Running the drive through all workloads produced very minimal noise.

Overall, the 6TB Desktop HDD from Seagate is a great solution and reason for all of us to dump our low capacity drives and start enjoying both high capacity and high performance in one solution!

The Seagate Desktop HDD 6TB in kit form carries an MSRP of $299.99 with a two-year warranty. 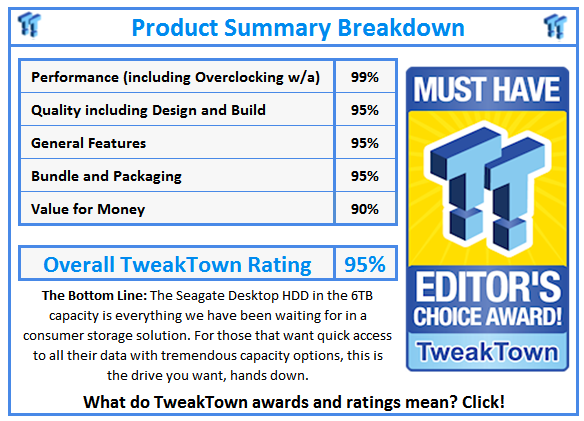