Virtualization is really a stab at reducing total IT costs by moving several servers into a single box. This reduces both the component costs and the long-term costs from running the servers, with power weighing heavily on the scale.

When Intel released Romley with up to eight DRAM slots and eight cores per CPU, virtualization moved to a new level. Not only were lower bin Xeons cheap, but they also had the processing power to run several virtual machines. This eventually led to a new bottleneck forming.

While the virtual machine count increased, more machines were trying to communicate outside the node via the same gigabit Ethernet port that's been a standard for several years. Then, the systems soon required additional storage. This led to further constraints on the network as external NAS and SAN products supplied the additional storage density.

We're now at a tipping point for small businesses. 10GbE is now in a familiar form, RJ45, and the price is within budget for even small remote offices. The Netgear XS708E is the product that brought 10GbE to this point. 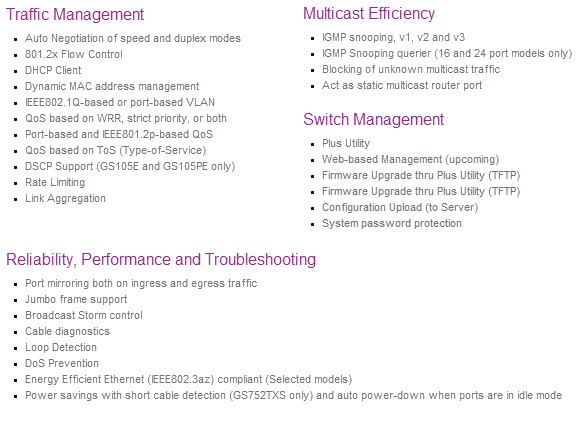 The Netgear ProSAFE XS708E doesn't have the same impressive list of features that we found on the XS712T, but it does provide a nice list of features. The biggest feature is, of course, the network itself, which is 10 gigabit to eight devices.

At this time, the XS708E doesn't use a web interface for management, but the specification sheet says the feature is coming. The Netgear Plus Utility, on the included software disk, does open the switch up for additional configuration. One feature we found useful was Link Aggregation. When using servers that do not have 10GbE capability, you can trunk ports together, even 10GbE, to increase bandwidth.

We saved the best part until this point. After a search, we managed to find the Netgear ProSAFE XS708E for just over $800. At $100 per port, the XS708E costs a bit more per port than the next 10GbE up the Netgear chain, but the twelve-port model has a total cost of over $1100.

To sweeten the deal, Netgear includes a lifetime warranty when purchased from an authorized seller.

PRICING: You can find the Netgear ProSAFE XS708E for sale below. The prices listed are valid at the time of writing, but can change at any time. Click the link to see the very latest pricing for the best deal. 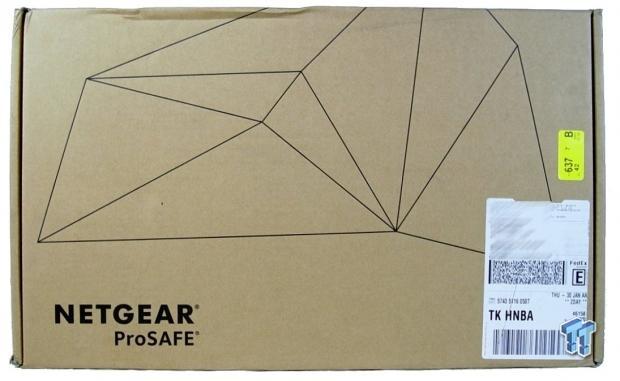 Our sample ProSAFE XS708E shipped in the retail package. 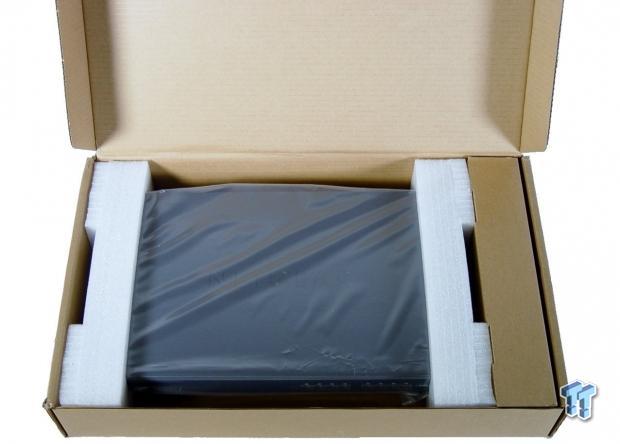 Inside, we found the switch protected with dense foam and adequate protection on the corners where damage occurs during shipping. The accessory package was separate and away from the switch. You can see it here on the right side of the package in its separate box. 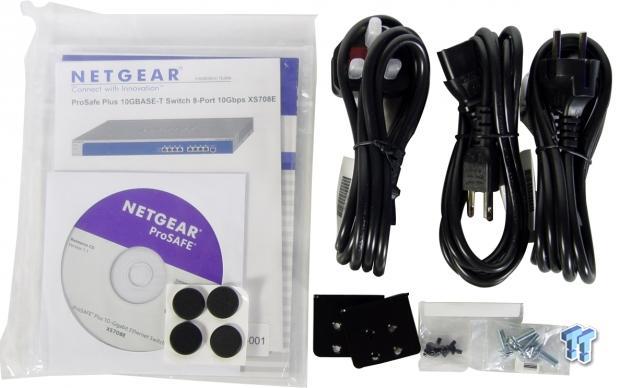 Here we get our first look at the Netgear ProSAFE XS708E. There are eight 10GBase-T RJ45 ports and one SFP+ port shared with last RJ45 port.

Status LEDs indicate power and, in the event of a failure, the fan status. Just below, we found a recessed factory default button.

The port configuration is straightforward. There are eight RJ45 ports, with the last being shared with an SFP+ port. You can run an SFP+ to an optical fiber adapter or a Twinax cable. We tested an Intel SFP+ optical from an Intel X520-SR2 and it worked as expected.

The back of the switch has a Kensington lock adapter, the power plug connector, and a sticker that shows the serial and MAC address numbers.

Air flows from the left side of the case and exhausts on the right side. 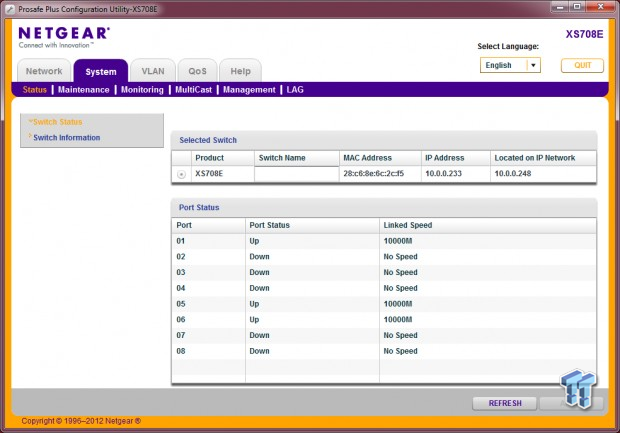 Unlike the 12-port Netgear XS712T we reviewed last month, the XS708E doesn't have the same management capabilities. We managed the XS712T via an IP web browser; to configure the XS708E, you use the software on the included disk. The software is also used to update the switch's firmware. 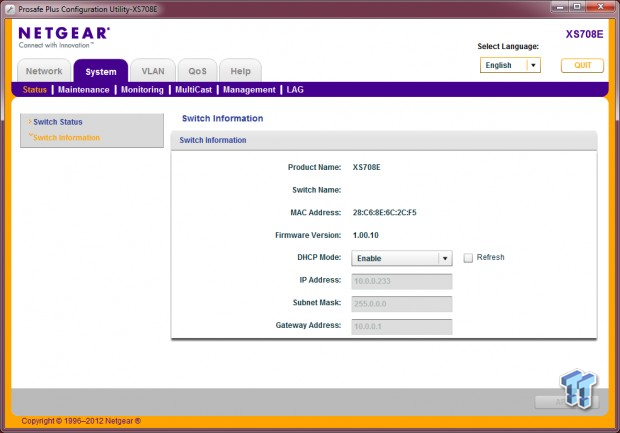 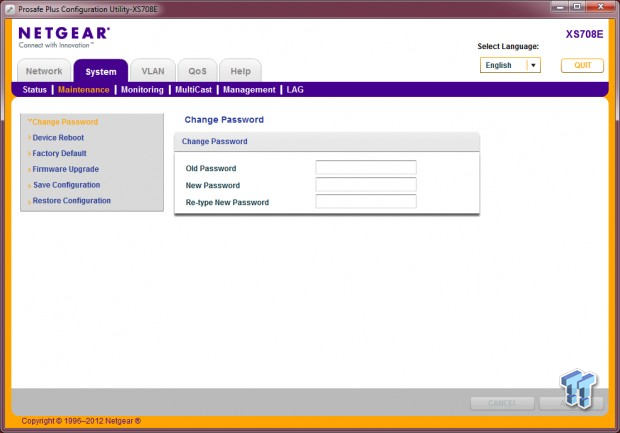 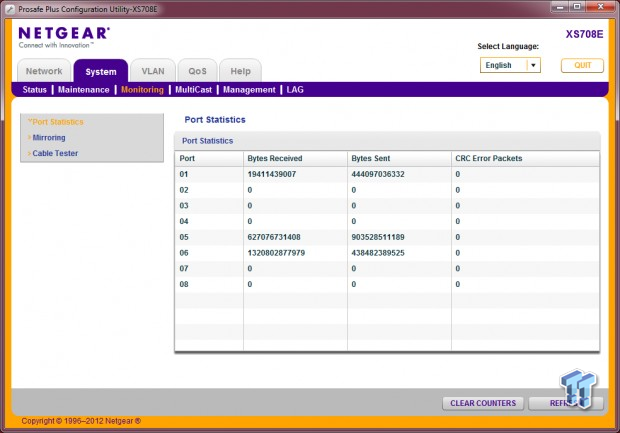 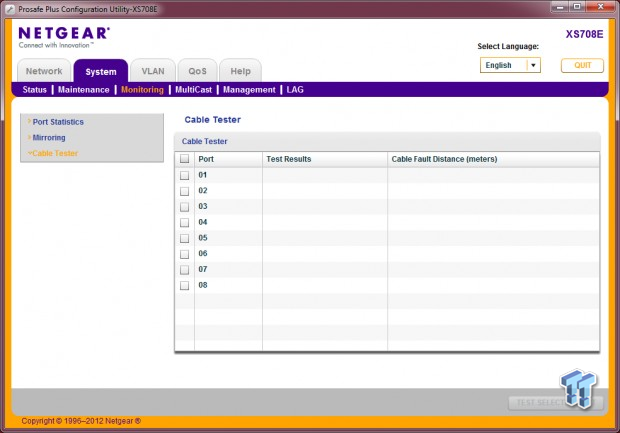 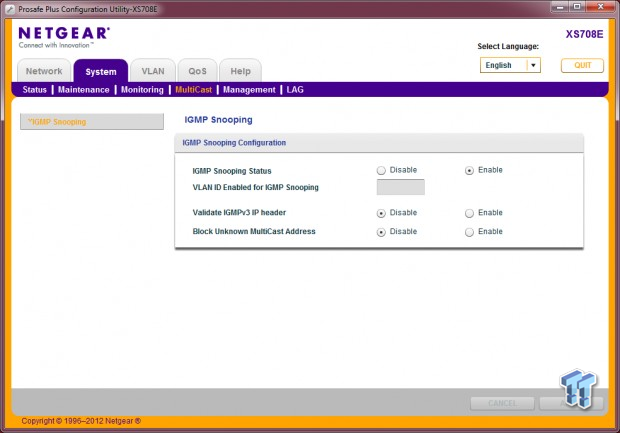 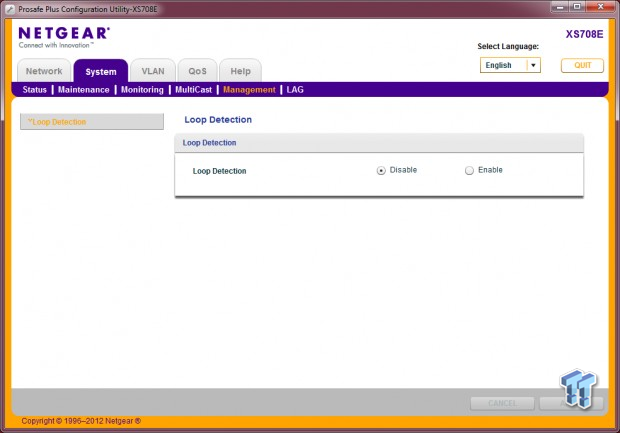 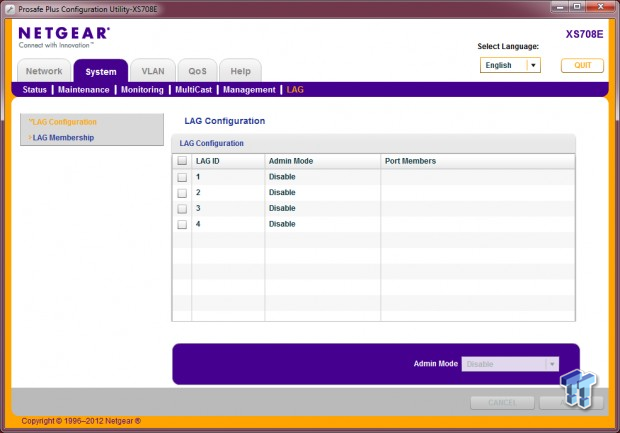 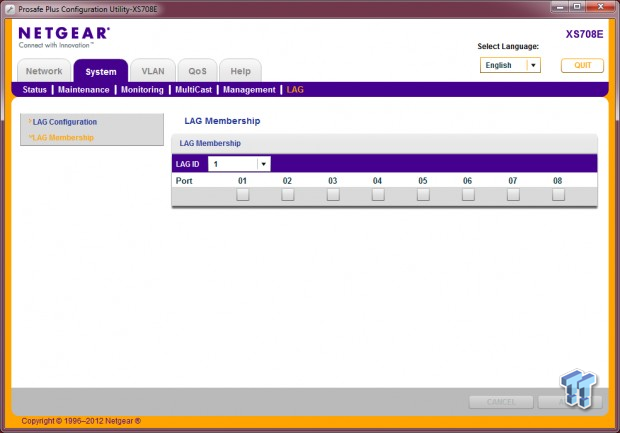 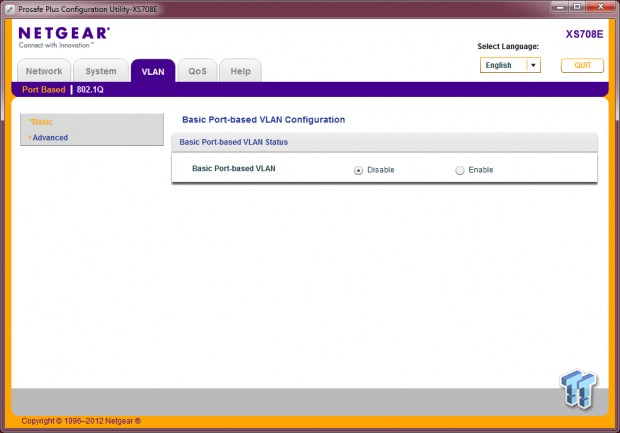 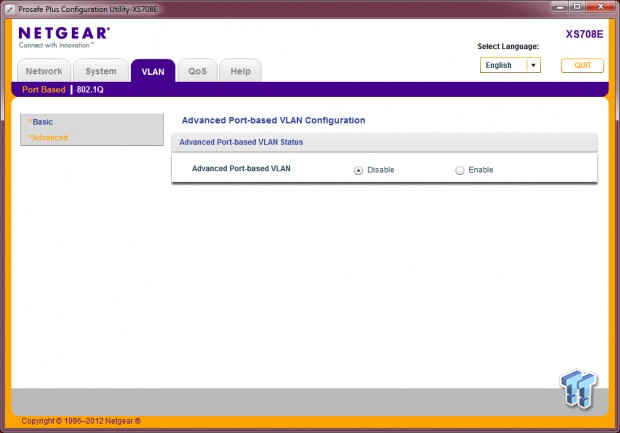 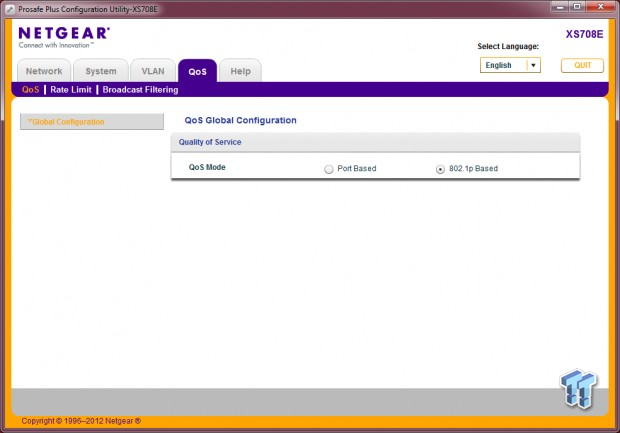 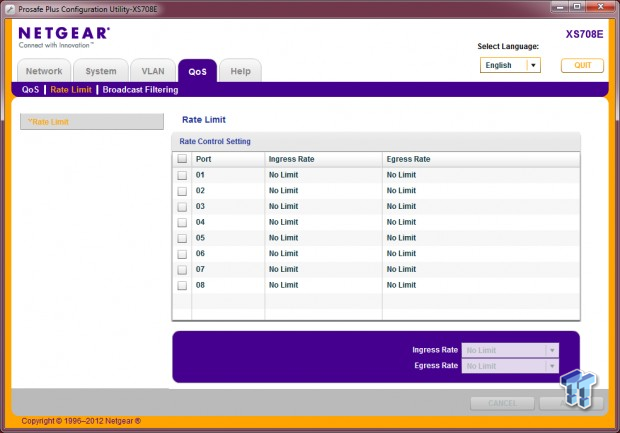 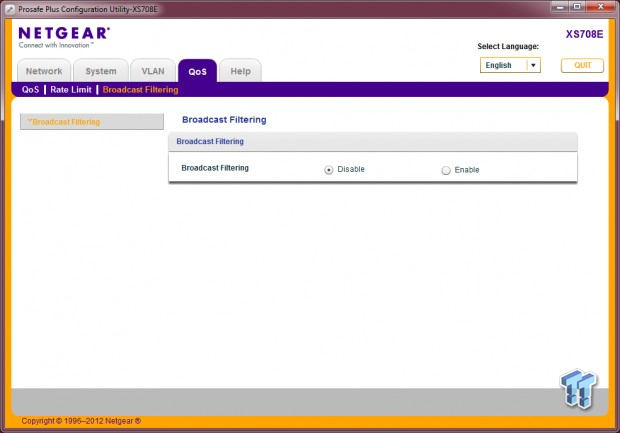 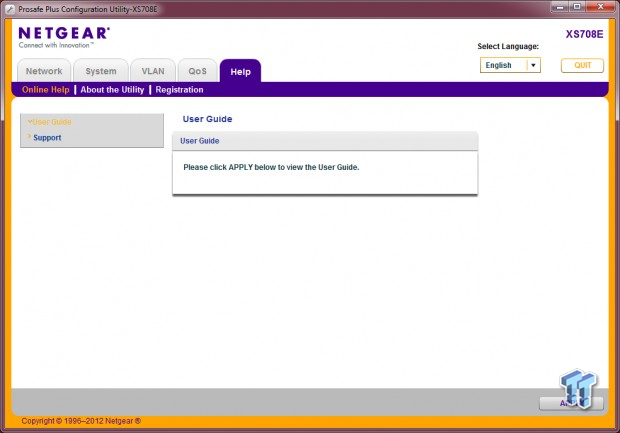 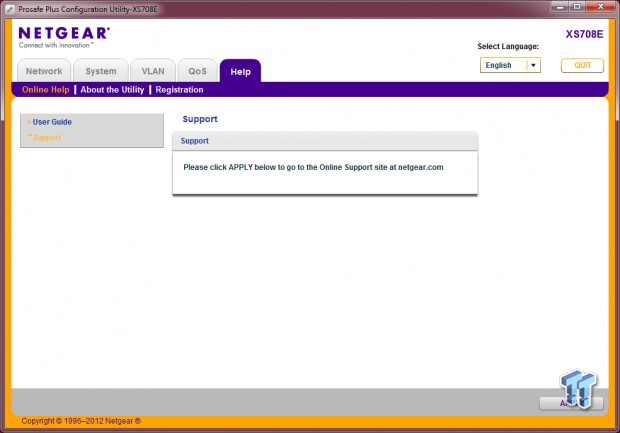 You can also access the full manual through the software. 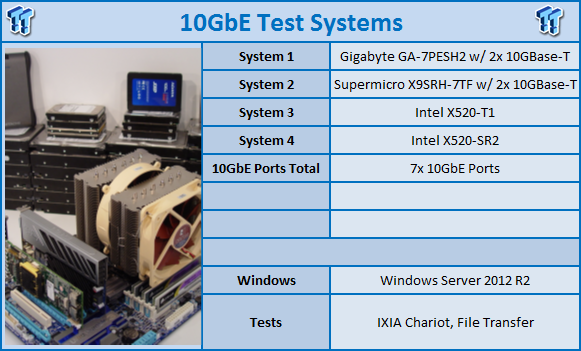 Ideally, we would run the Netgear ProSAFE XS712T with all eight ports at 10GbE, but we're still building our test lab.

For our test today, we're using one of the 10GBase-T ports on a GIGABYTE GA-7PESH2 dual-processor board and a Supermicro X9SRH-7TF single-socket motherboard. Both have onboard 10GBase-T. The third system uses an Intel X520-SR2 PCIe card so we can test the SFP+ port on the Netgear ProSAFE XS708E. 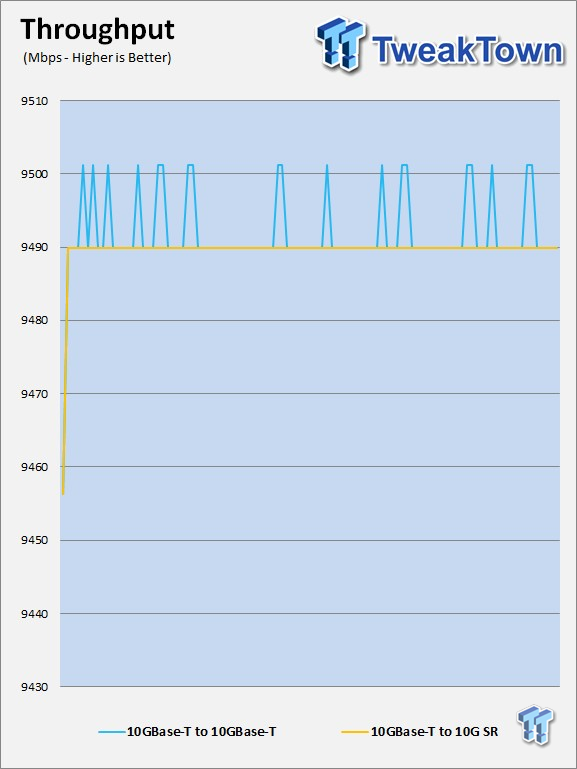 In our test with IXIA IxChariot, we scored just over 9.5 Gbps between our two test systems using copper. With one copper and one fiber, we were just under the same mark. 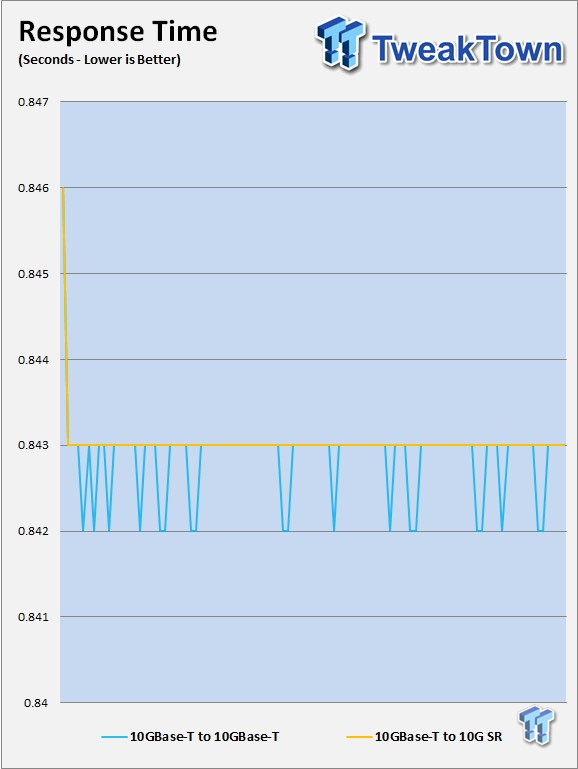 The latency was very consistent throughout the test. When storing virtual machines on a NAS or SAN, you want consistency.

Netgear calls the XS708E the world's first SMB switch with 10 gigabit connectivity, but we think it's much more than that. Virtualization is on the rise in many market segments, and the low price mixed with the features offered make this product attractive for many markets.

At roughly $100 per port, the Netgear XS708E and larger XS712T break into the SMB market like a tornado. We haven't found any other switch with all 10GbE ports priced anywhere near this point.

For smaller businesses, the XS708E feature list is just enough to get the network set up without requiring a dedicated IT staff to fumble through the configuration. Sometimes it's easy to forget that having a large number of advanced features available can sometimes become a distraction for small businesses looking for more of a plug-and-play solution. The Netgear XS708E provides that experience but still offers enough additional features when required.

Since the XS708E is non-blocking, there isn't much to add on the performance side. Each port receives 100 percent of the bandwidth offered by 10GbE, so performance is less of a concern than setup, the feature set, and price.

It's difficult to get away from talking about the price because regardless of everything else, this switch is clearly the market leader at this time. Other companies have started to talk about low cost 10GbE SMB products, but Netgear has already delivered.

PRICING: You can find the Netgear ProSAFE XS708E for sale below. The prices listed are valid at the time of writing, but can change at any time. Click the link to see the very latest pricing for the best deal. 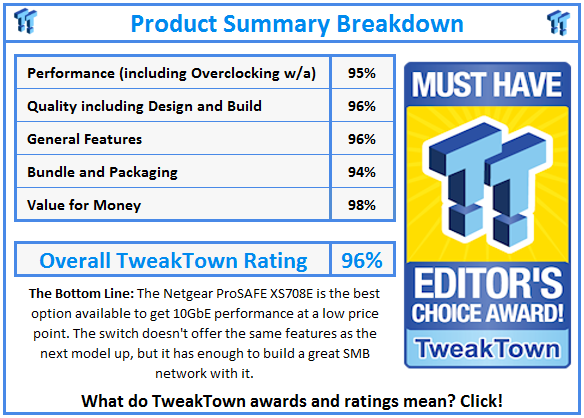