I've reviewed two of Patriot's FUEL+ Mobile Rechargeable Battery's now, the first of which was the 9000mAh model, and the second being the 6000mAh model. Today we have the 3000mAh model, which is more of the same in Patriot's unstoppable FUEL+ line of batteries.

The 3000mAh model is quite different, even at first glance, with the box being smaller, and the charger itself significantly smaller. We can see here it's in the same of a lipstick container (what am I saying? what do I know about lipstick!) meaning that it's small. 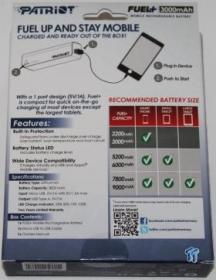 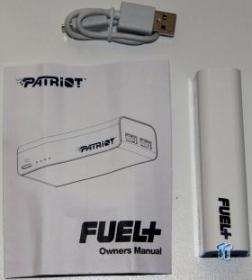 We have some shots of the front and back of the box, above. Outside of the box, we have the Patriot FUEL+ 3000mAh Mobile Rechargeable Battery itself, an Owner's Manual, and the microUSB cable to charge the device with (and to charge your smart devices with, too).

Newegg has the Patriot FUEL+ 3000mAh Mobile Rechargeable Battery available for $34.99, which is a steal. Let's get on with the review! 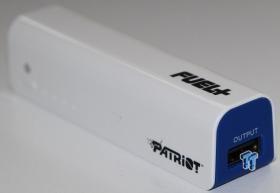 The 9000mAh model was obviously the champion in Patriot's FUEL+ line, but the 3000mAh model does have its place. It's much smaller, as you can see from the various shots below, and much lighter. Where the 9000mAh model would not be something you'd carry around with you, I found myself taking the FUEL+ 3000mAh model with me in my pocket. 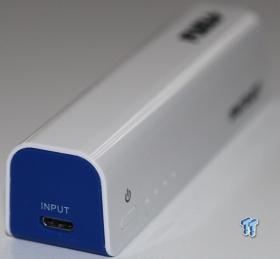 It stood out of course, but at least it was charging my device for me. The 3000mAh charge inside of it is enough to charge most smartphones on the market, but you'd be pushing it with a Samsung Galaxy Note II for example, which has a 3100mAh battery.

You would be able to charge it up to 90-95% or so, which would be fine. I find the best use for mobile chargers is to plug them in when you're travelling or not using the device, such as driving, and then take it off when you need to get out of the car. That way, your device is at least charging up for 30-60 minutes, which can pump ~30-40% back into the device's battery.

I used my Google/LG Nexus 4 smartphone, which has a 2100mAh battery. I drained my N4 down to 10%, letting the FUEL+ 3000mAH Mobile Rechargeable Battery do its thing, and within an hour or so, I had a fully-charged Nexus 4 and a little bit of juice left in the FUEL+ charger.

I think the perfect case for the 3000mAh model would be for when it can be thrown in a small bag - such as a woman's handbag, for example. My wife used the Patriot FUEL+ 3000mAh battery a few times, where she could just plug it into her smartphone and drop the FUEL+ charger into her handbag.

While she was driving (or shopping), her smartphone was charging, but it was light enough for her to leave the cable plugged into the FUEL+ charger, and use while it was sitting in her handbag. This is a perfect case for the FUEL+ 3000mAh charger, where it is small and light enough to be plugged in, charging your device, while you use it.

Patriot has a top-to-bottom kick-ass line of mobile rechargeable batteries in its FUEL+ line, and I have not yet found a better alternative. Patriot - keep up the good work, and get to work on a 10,000mAh+ model, please!