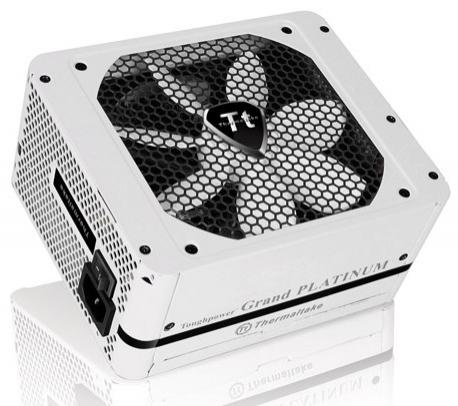 The Toughpower series of power supplies from Thermaltake is one of the most renowned series of power supplies around and for good reason. The units refuse to compromise on quality anywhere and can handle abuse, day after day after day. The Toughpower Grand units take things a little further and add in beauty to the lineup for those that are seeking both performance and aesthetics.

Today we have the new Toughpower Grand Platinum 700W power supply on the test bench. Thermaltake has upped the efficiency of the unit to provide 80 PLUS Platinum efficiency and delivered and all white unit, including cabling. It will take a lot more than some good looks and high efficiency to make this unit live up to the Toughpower Grand name, so let's see what it is made of as far as specifications go. 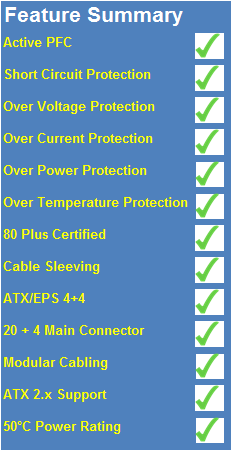 Just as you'd expect from something bearing the Toughpower Grand name, the TPG-700M's feature list is filled full of checkmarks. All protections are present including SCP, OVP, OCP, OPP and OTP. The power supply features both native and modular cabling. All cables are white and fully sleeved or of the flat ribbon variety. It is rated for 80 PLUS Platinum efficiency and 100% continuous output at 50C.

Thermaltake has an MSRP of $179.99 for the Toughpower Grand Platinum 700W power supply. You'll find it with a $10 premium on Newegg, but you'll also have to cough up some shipping to bring the total up to $201.29. This easily makes it the most expensive Platinum rated power supply in the 700W range available. Thermaltake backs the Toughpower Grand Platinum 700W with a seven year warranty. 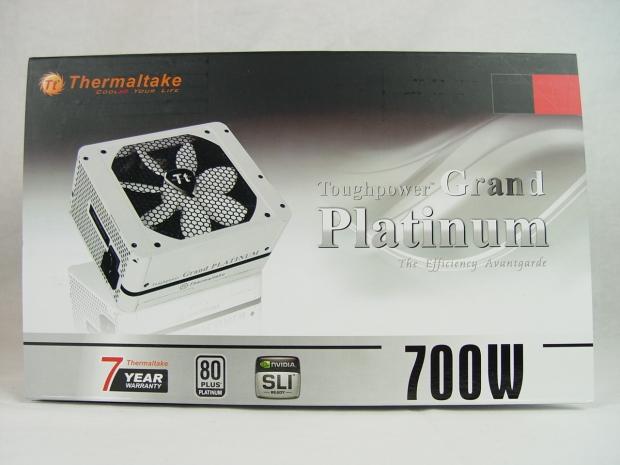 The front doesn't give us too much information beyond wattage, warranty, efficiency and color of the unit. 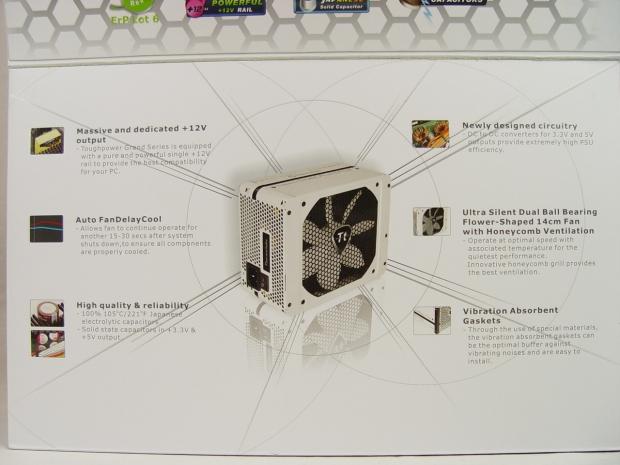 The front also flips up, revealing more information on the unit such as 100% Japanese capacitor construction and the inclusion of vibration absorbent gaskets. 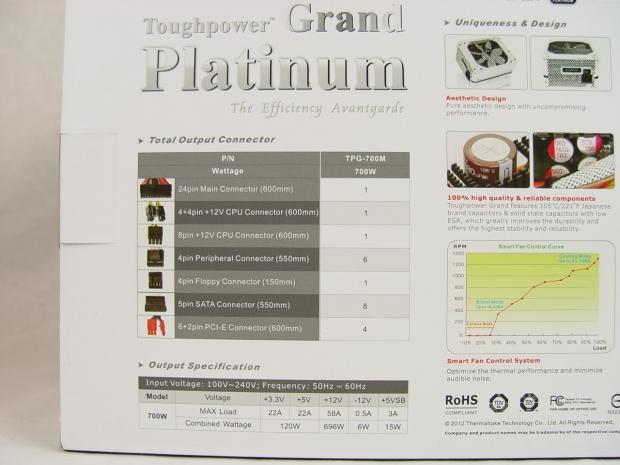 The left half of the back presents us with the I/O specifications and the connector availability list. 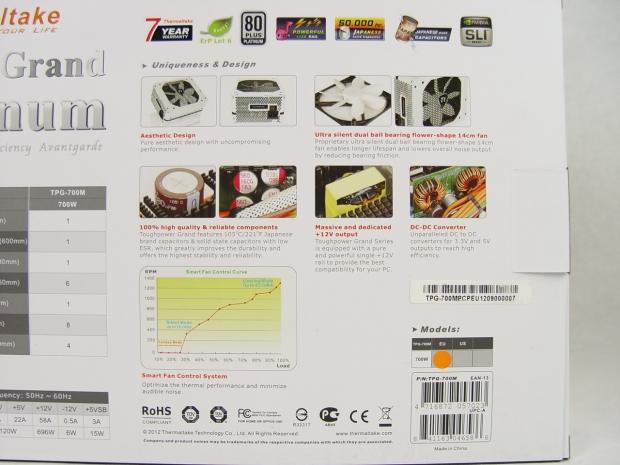 Over on the right side, we have a pictorial view for most of the features of the power supply including a graph of the fan speed and noise. 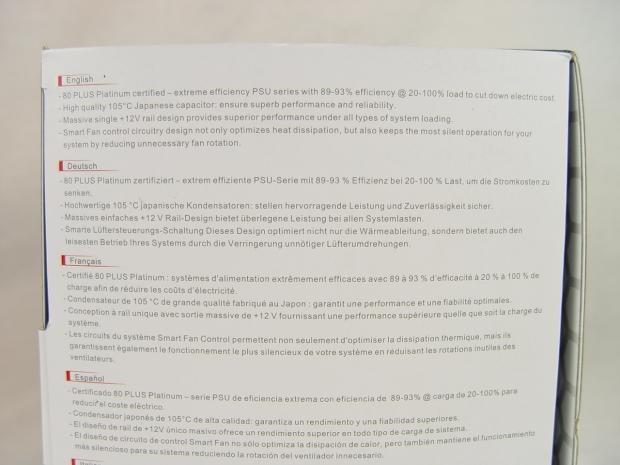 The top and bottom both contain nothing more than the Thermaltake logo while both sides have just a few bullet points on the unit in multiple languages, all of which are listed elsewhere on the box. 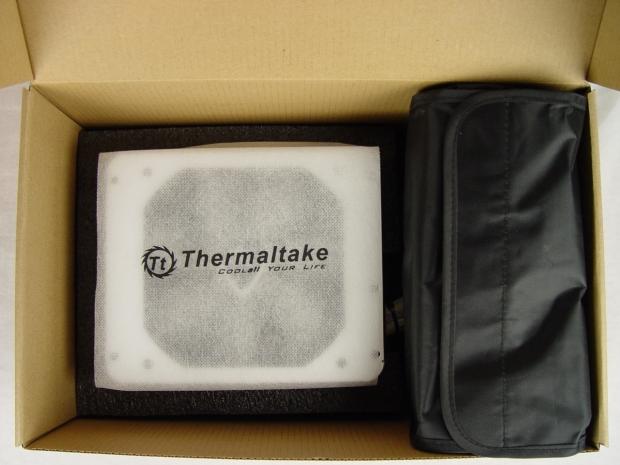 As expected, the unit is well protected by foam all the way around. The modular cables occupy the black bag. 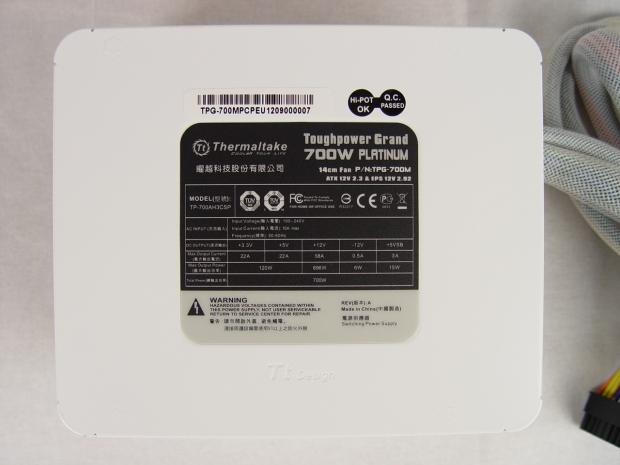 The TPG-700M is an all white unit with the exception of a single band of black running around the outside and the text. The top features the serial number and I/O specification label. 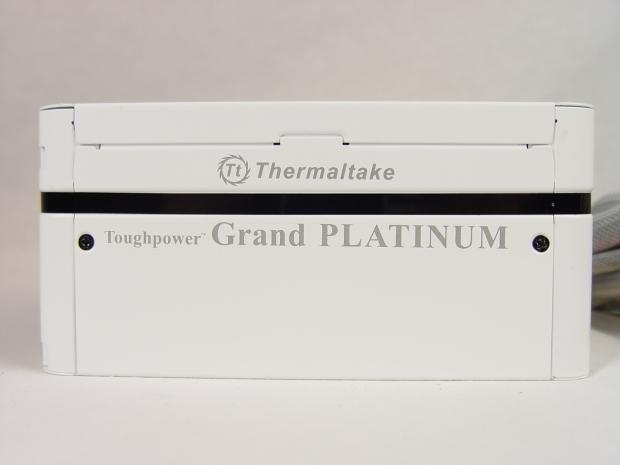 Both sides feature the same text, just inverted on the opposite side. 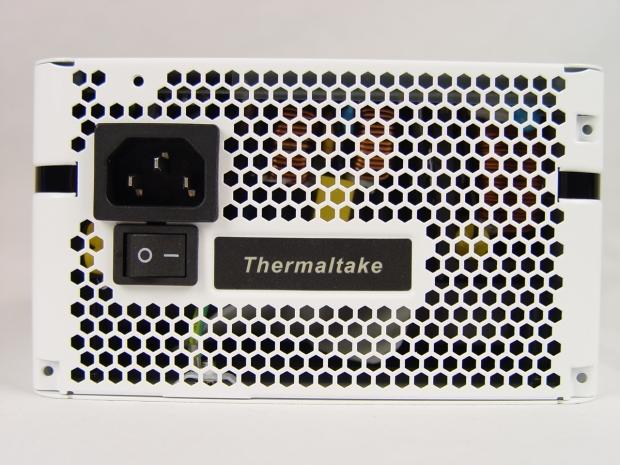 There isn't anything out of the ordinary on the back other than the Thermaltake logo which obstructs a small amount of airflow. 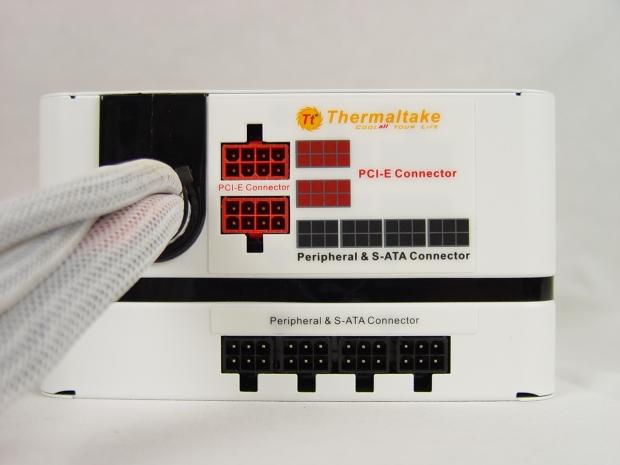 On the front, we find all of the modular connectors along with labeling to tell you which connectors are for which cables. 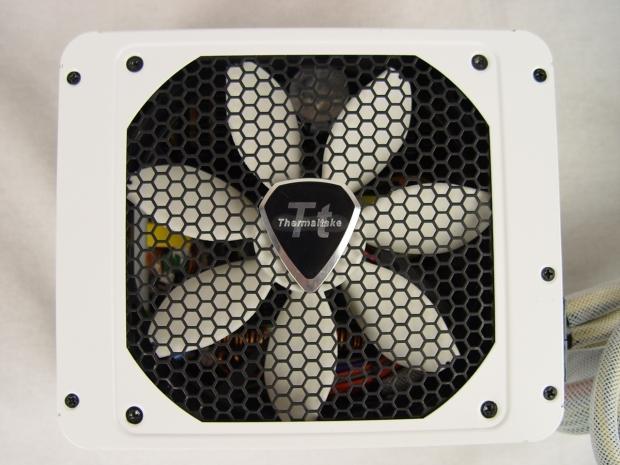 The bottom presents us with the black mesh fan grill which contrasts nicely with the white 140mm fan that cools the TPG-700M. 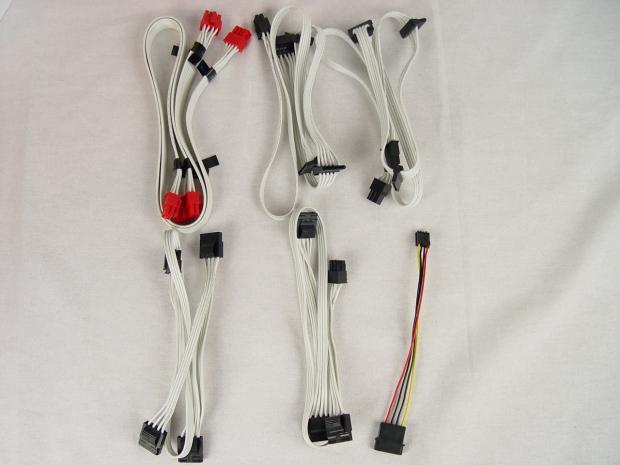 All modular cables included with the power supply are white with the exception of the Molex to FDD adapter. 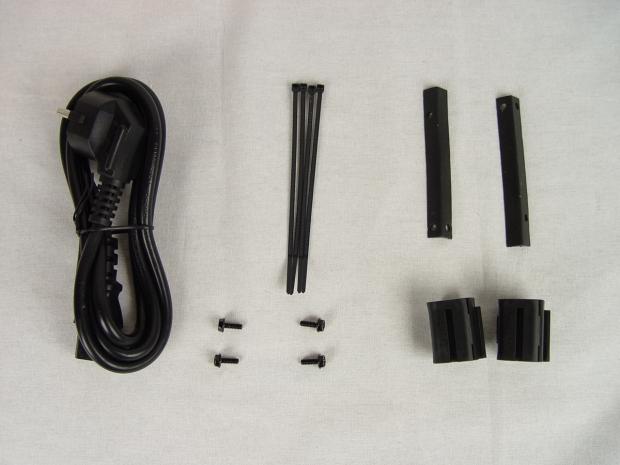 As far as accessories go, there is quite a bit going on there. There are two rubber vibration isolation mounts designed for the corners of the power supply. To accommodate these, four long mounting screws are also included. Cable management is provided in the form of some zip ties as well as two plastic cable locks. 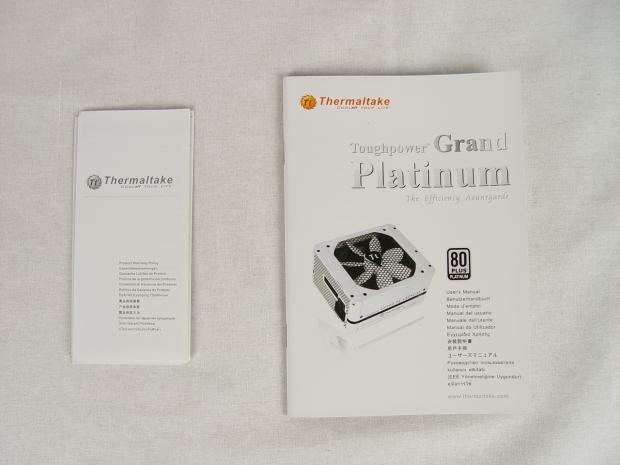 Two pieces of literature are included in the box. One is a warranty pamphlet while the other is the user manual.

The cable selection and connector availability for the Thermaltake Toughpower Grand Platinum 700W is about as perfect as you can get. There are dual EPS12V connectors for systems that need it as well as four PCI-E connectors over three cables to provide enough power for two high-end video cards. There are also eight SATA and six Molex connectors available for peripheral devices. The only thing that would be nice to see is the second EPS12V connector made modular as few will need it in a mid-range power supply and it will just provide clutter on the inside of a case. 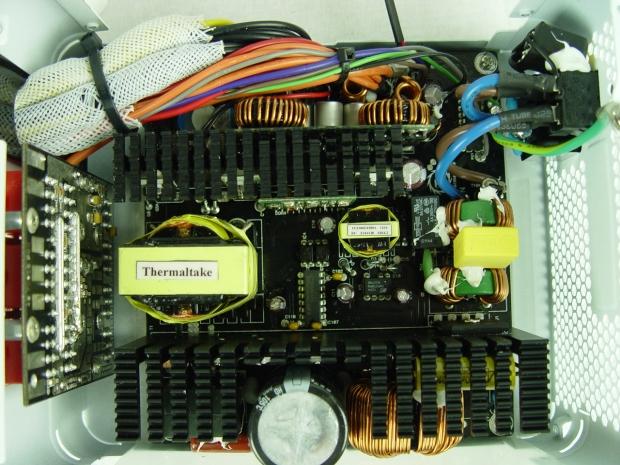 Inside we have a very open unit with two large heat sinks running the length of the power supply. The PCB is also somewhat compact and Thermaltake could have used a shorter enclosure if they had wanted. 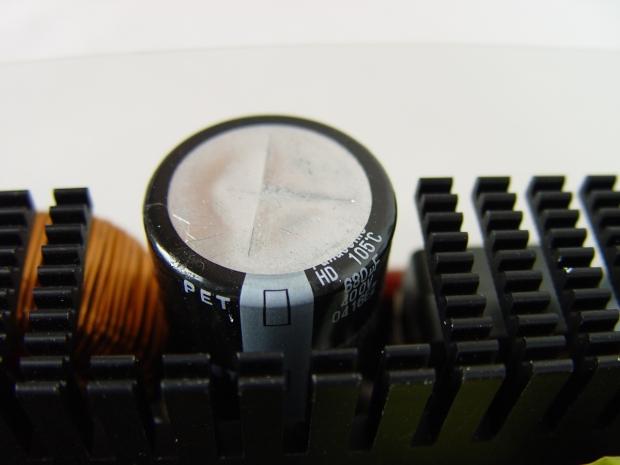 A single Panasonic capacitor sits on the primary side of the Toughpower Grand Platinum 700W power supply. 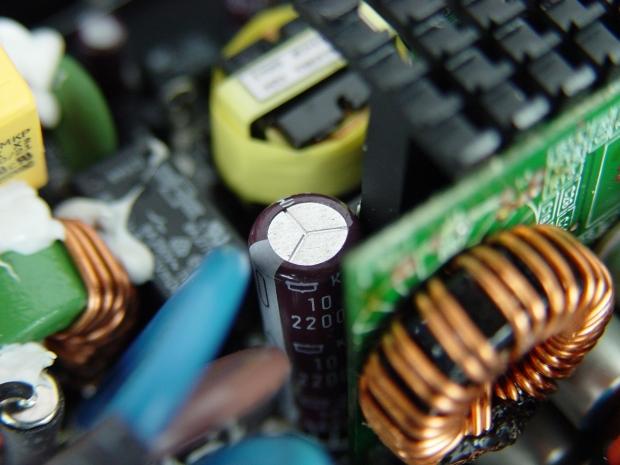 The secondary side is packed full of Nippon Chemi-Con caps. 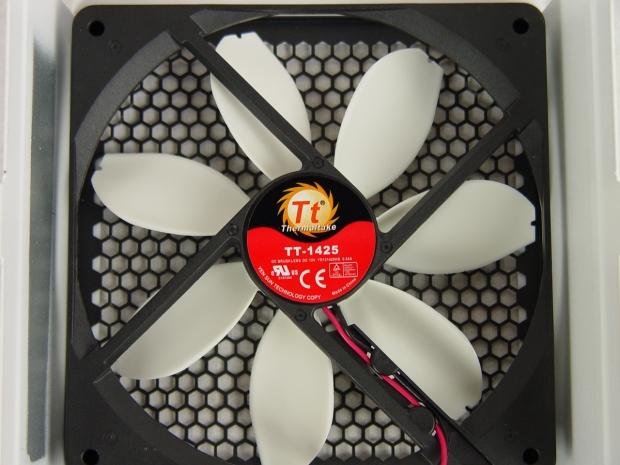 Thermaltake uses their own TT-1425 140mm fan to provide the active cooling for the TPG-700M. This fan is simply a rebrand from Yen Sun Technology.

The tests performed are based around six conceivable setups that are out there and progressively load down the PSU up to the power supply's limits or 1000W, whichever comes first. Since our test equipment's limits are higher than to that of the Thermaltake Toughpower Grand Platinum 700W power supply, we can test it to the maximum.

DC Output quality for the Toughpower Grand Platinum 700W was okay, but well within specification. During Test 1, we saw 22mV of noise on our scope. When we increased the loads in Test 1, the ripple climbed to 33mV at a little under half load. During Test 4 under a load of 700W, the oscilloscope showed a maximum of 52mv on noise on the 12V rail.

As we stated from the start, the Toughpower Grand series is known not only for its performance, but also the aesthetic design. As far as aesthetics go, the TPG-700M does an amazing job. It looks fantastic in white with some high-contrast black to accentuate it and provides yet another option for those seeking something other than a black power supply. It should match very well with white cases such as Thermaltake's own Level 10 white cases.

The performance of the Toughpower Grand Platinum 700W is almost just what we expected, too. Voltage regulation is superb, coming in at 1% on the 12V and 3.3V rails and 2% on the 5V rail. Efficiency is superb as well, giving us just what is advertised. Where we are a little surprised is in the DC output quality department. We expected a bit better noise suppression, especially considering the reputation of the unit and the build quality we saw. Regardless, 52mV of noise on the 12V rail is far from being bad, but there are many units on the market that do it better... including other Thermaltake units.

The sad thing is that all of this comes with a somewhat high price premium that is made worse by a bit of gouging done by Newegg. At least Thermaltake sweetens it up a bit with a solid seven year warranty, ensuring that your investment is going to be around for a while, even if there happens to be an issue with the unit down the track. 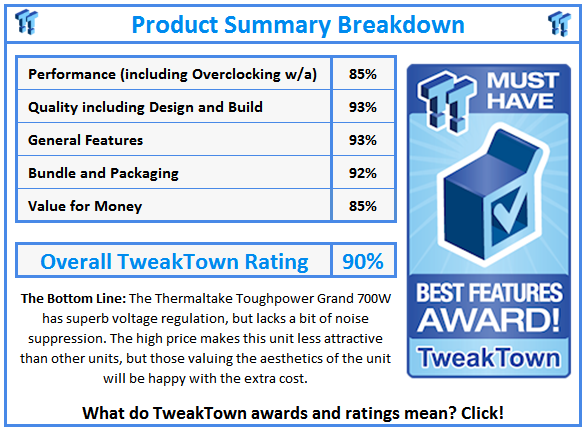