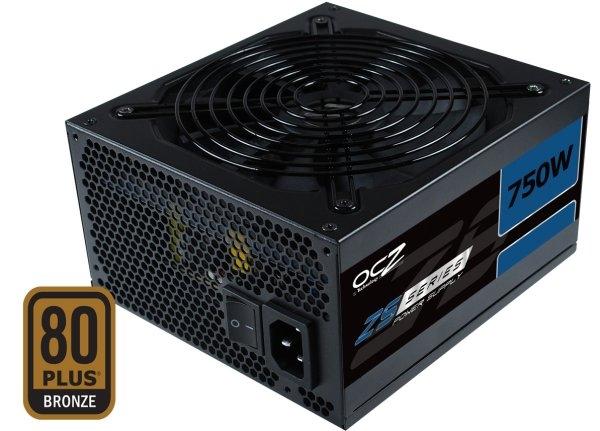 The last time we took a look at a power supply from OCZ, it was their top of the line ZX850 power supply. It featured just about everything you could ask for in a power supply, including superb performance, 100% modular cabling, 80Plus Gold efficiency and more. While the top of the line units are great for those who aren't on a budget, they certainly aren't for everyone. Today we are going to take a look at the opposite end of the spectrum, the ZS750.

OCZ launched the new ZS series of power supplies back in late July and is available in 550W, 650W and 750W varieties. The Senior VP of Power Management at OCZ stated that, "The new ZS line of power supplies provides customers with the ideal blend of quality, performance, and efficiency for power hungry desktops." - We will take an in depth look at the ZS750 and see just how well OCZ has blended the three and if it is worthy of your money.

Each of the minor rails is capable of outputting 22A and together they have a combined output of 130W. This is a tad bit less than we would like to see in a 750W unit, but since this isn't an enthusiast unit, we won't complain too much. 12V power is handled via a single rail that is capable of 54A of power for a total of 648W of power. While this isn't the most spectacular output we have seen from a 750W unit, it should be more than sufficient. 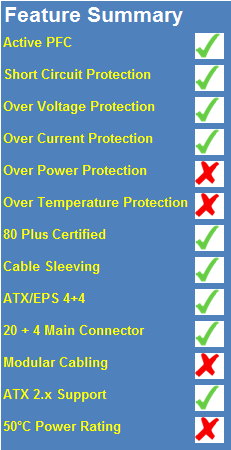 The ZS750 certainly lacks a few of the features we have become accustomed to seeing in our power supplies. OCZ doesn't rate the ZS series at 100% continuous output at 50C, but rather at a more modest 40C. The ZS750 also lacks Over Power Protection and Over Temperature Protection.

Getting your hands on the OCZ ZS series of power supplies shouldn't prove to be any trouble. The company has excellent market penetration and product availability. Newegg had the best price for the ZS750 at the time of writing this article, as the unit was listed for $99.99 with a 10% off code and free shipping. That means $90 for the unit shipped to your door. OCZ backs the ZS series of power supplies with a (somewhat short) 3-year warranty. 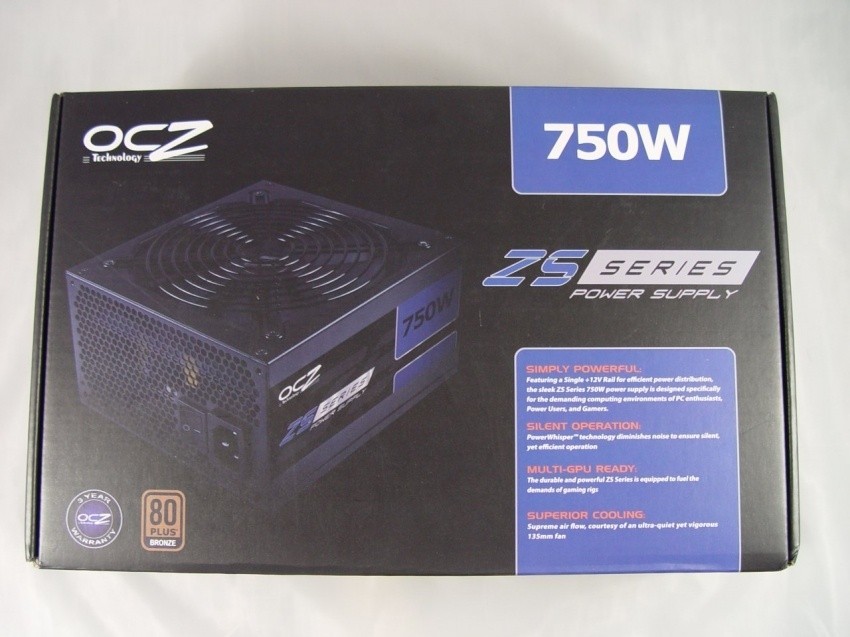 The ZS750 comes in some rather simplistic black and blue packaging. There is a good shot of the power supply on the front, a few marketing items are listed and the 80Plus Bronze logo is displayed as well. 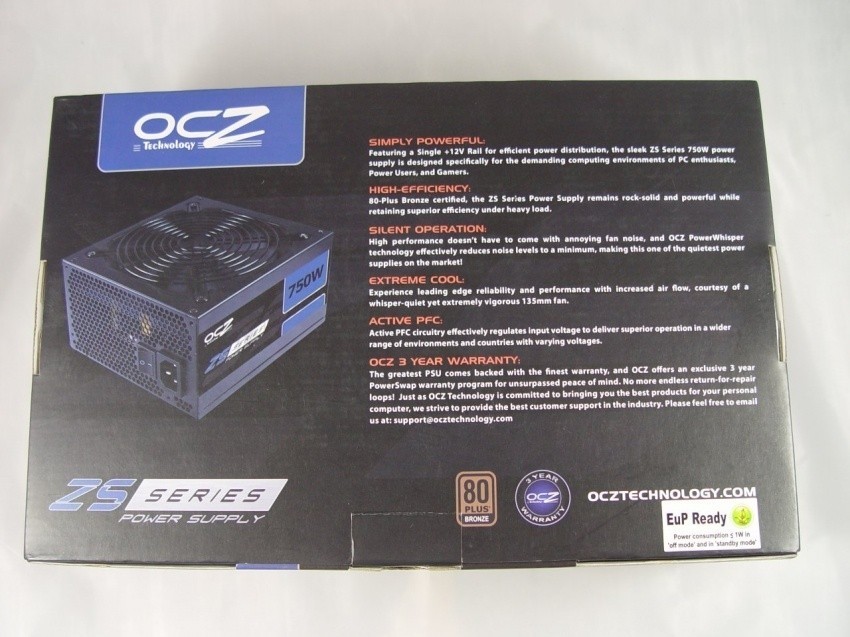 The back of the box repeats the information on the front with a little bit more added. 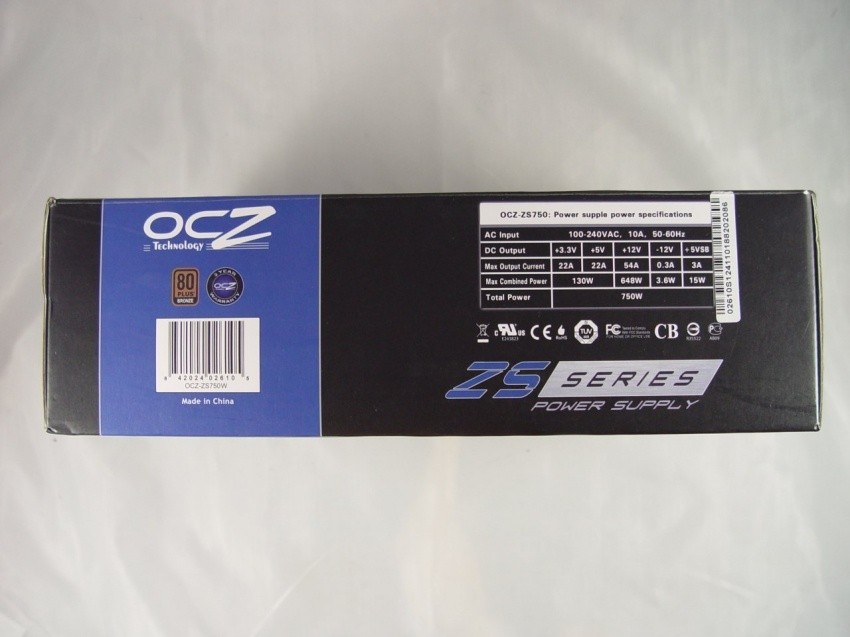 Flipping to the bottom, we find the I/O specifications of the ZS750. 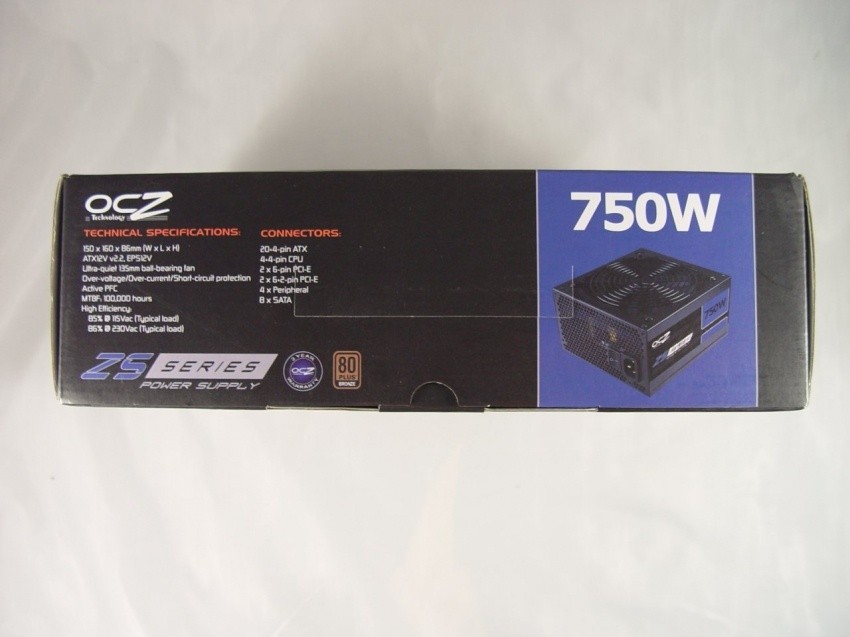 The top has a very paltry list of tech specs to put it nicely and also features a list of connectors available on the ZS750. 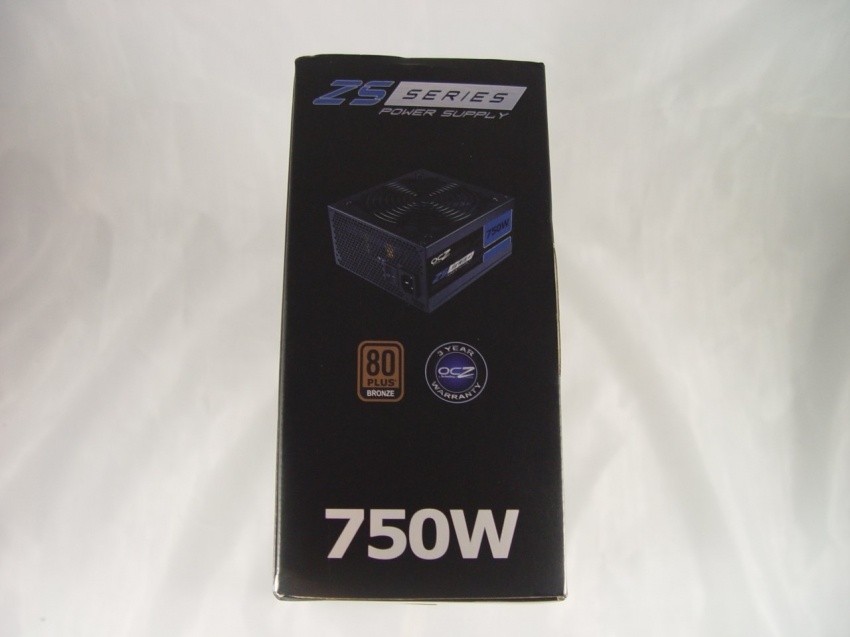 Both sides are void of any information that isn't covered elsewhere. 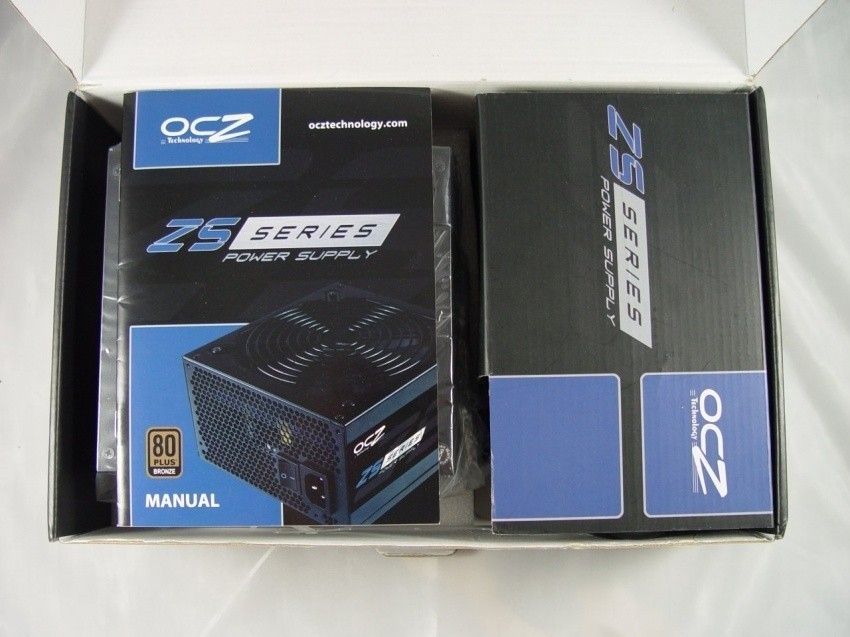 OCZ seems to have skimped a bit on the packaging for the ZS750. It only has foam protecting it on the bottom, although it does sit inside the cutout and is held in place. There is dead space surrounding the unit. Our unit arrived safely so we don't have any real complaints. 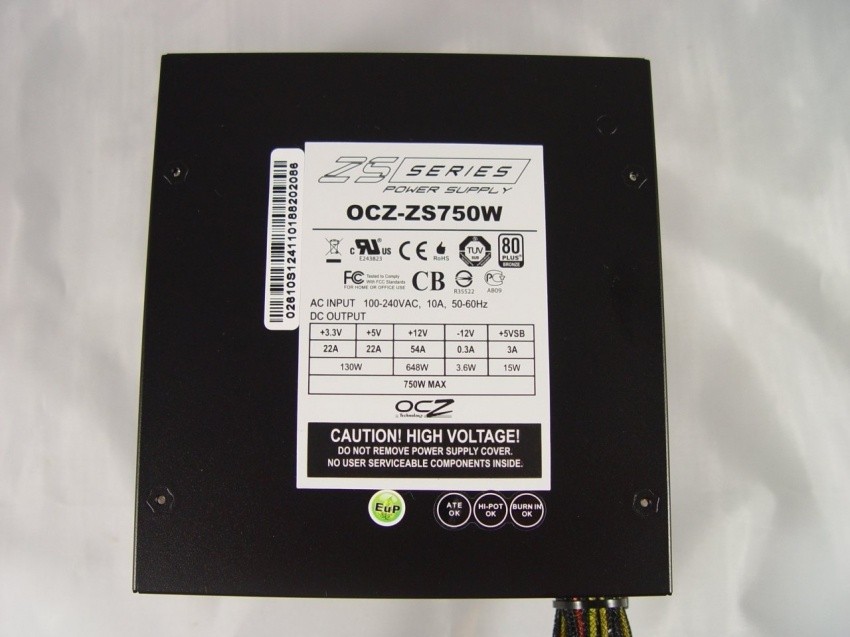 As has been the trend for the last 10 power supplies or so that we have reviewed, the I/O specification label for the ZS750 can be found on the top of the power supply. 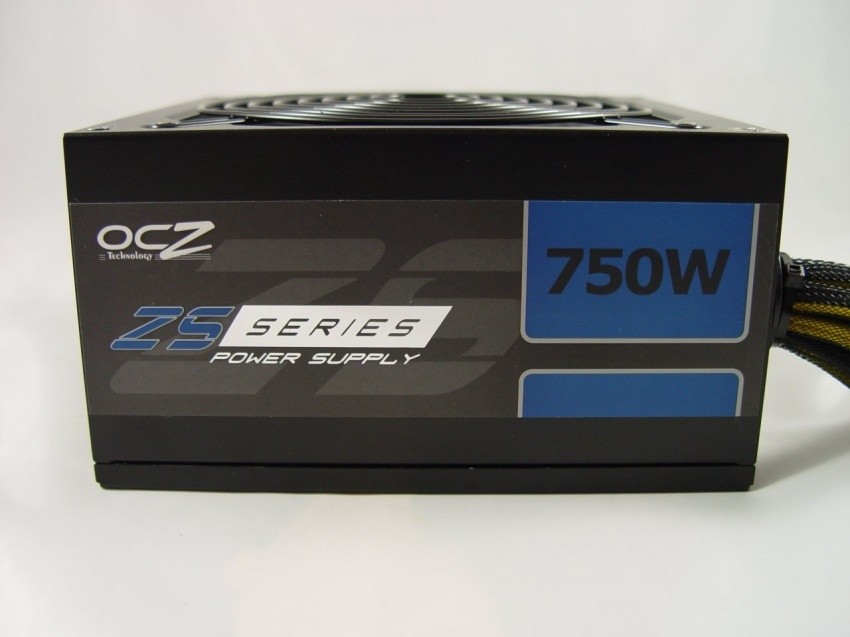 On both sides are the ZS series logos. 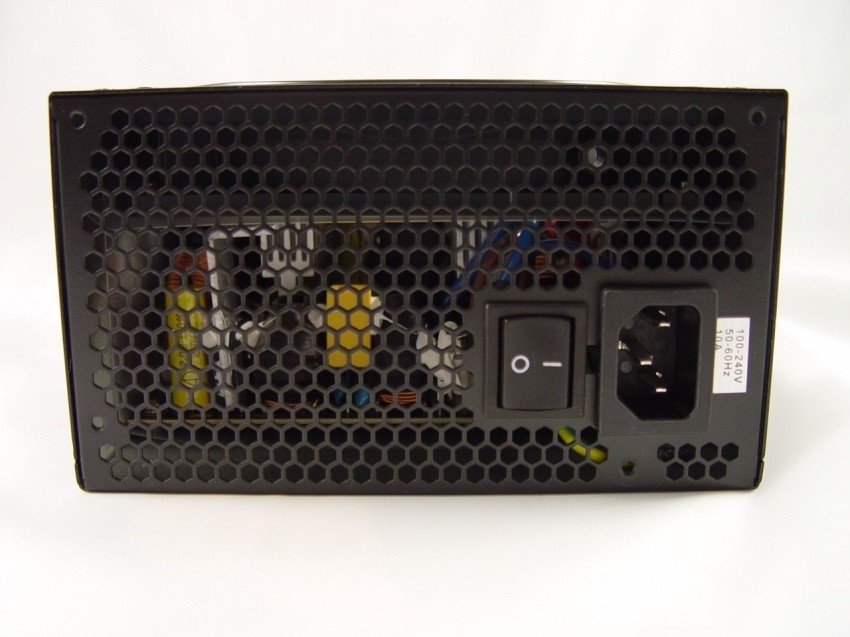 Taking a look at the back, we find the standard honeycomb mesh grill with both the AC input and on/off rocker switch present. 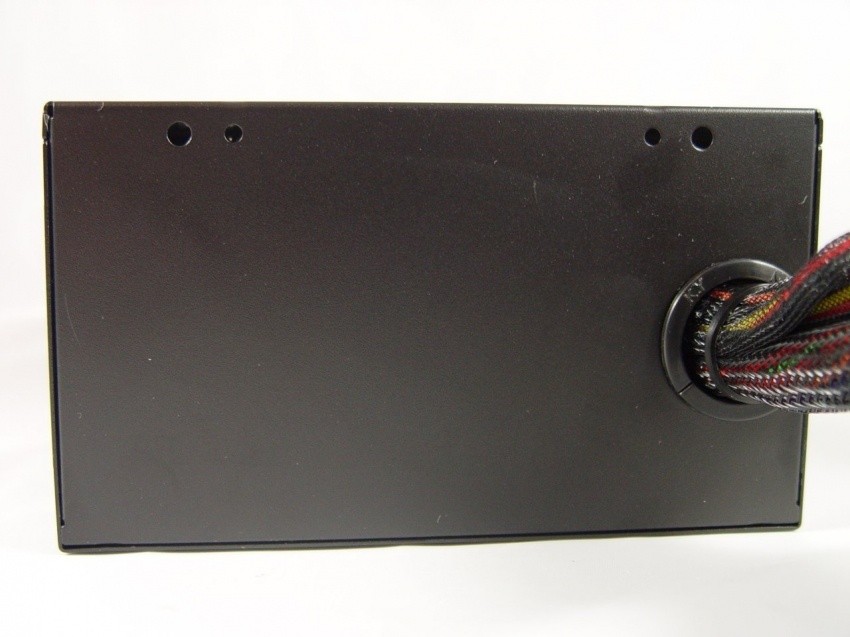 With the complete lack of modular cables, the front of the ZS series power supply has nothing going on. 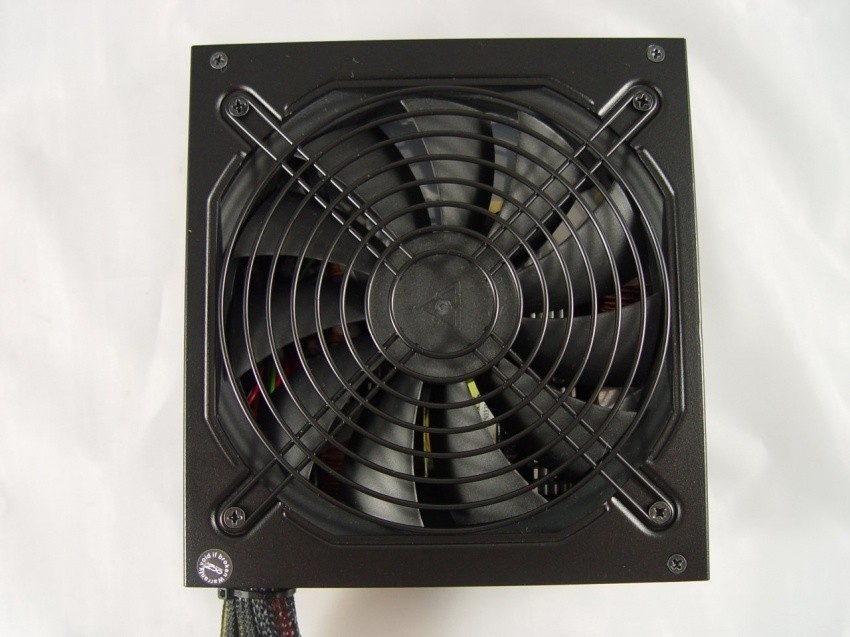 Rounding out our shots of the ZS750 is a glimpse of the 135mm fan that draws air into the power supply through the bottom. 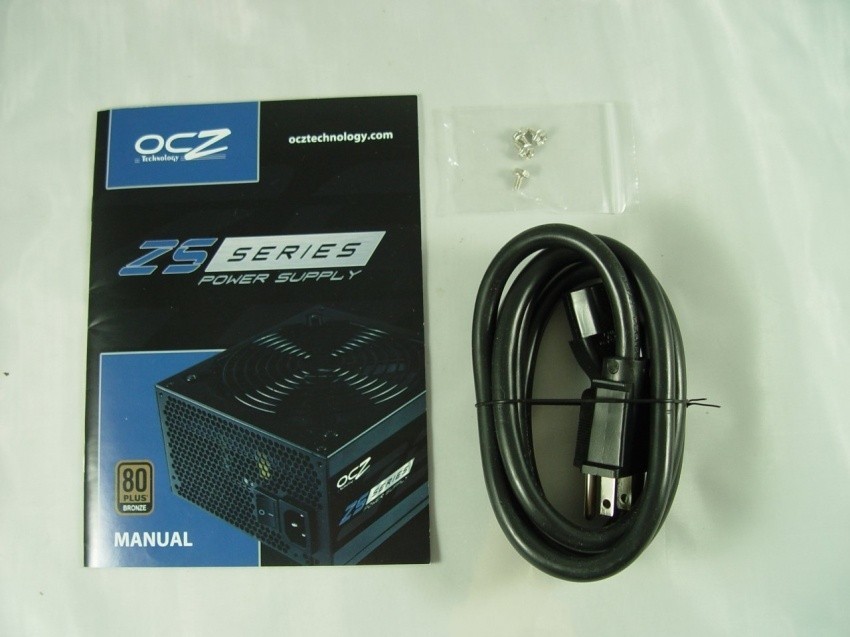 Also included in the box are the user manual, AC input cord and mounting screws.

OCZ has done an excellent job with cable selection and connector availability on the ZS750. Aside from the short 20+4 pin Main connector, the only missing thing here is a second ATX/EPS12V connector and that isn't really an issue since this isn't an enthusiast unit. 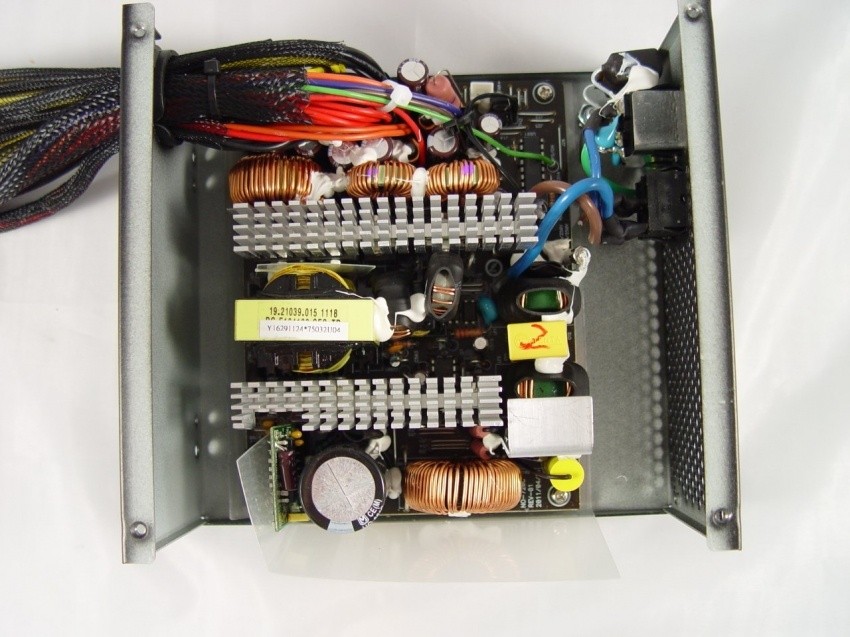 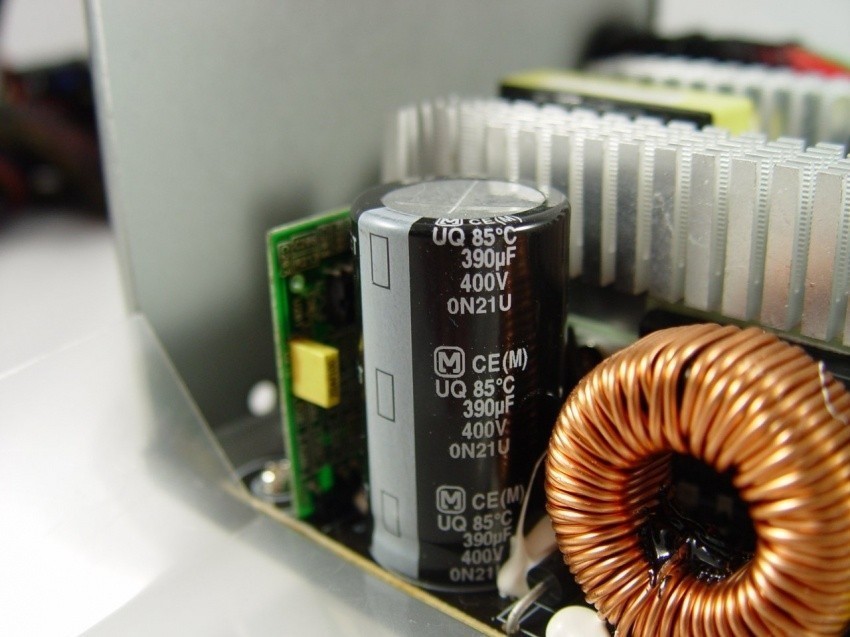 There is a single capacitor on the primary side manufactured my Matsushita, better known as Panasonic. 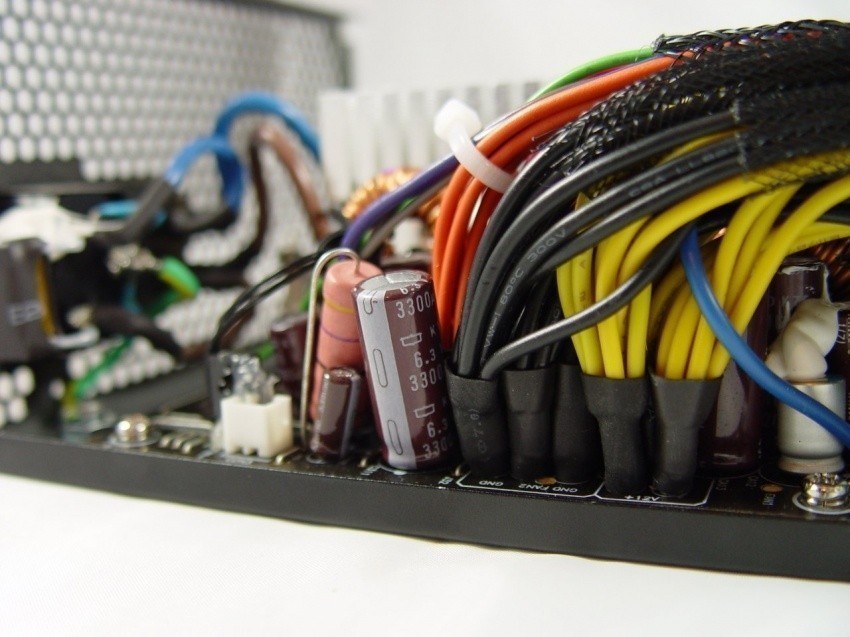 Over on the secondary side, OCZ utilizes Japanese made Nippon Chemi-con capacitors. 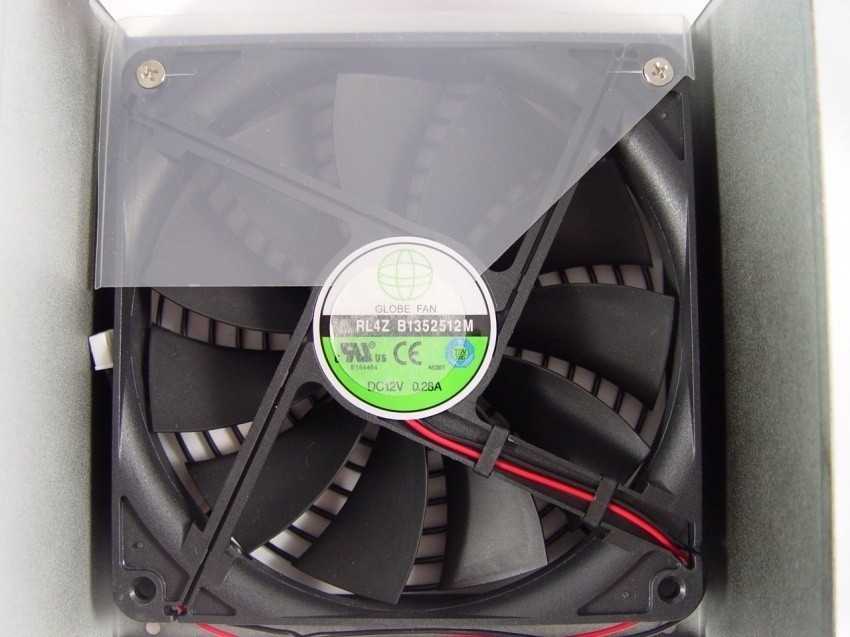 The tests performed are based around six conceivable setups that are out there and progressively load down the PSU up to the power supply's limits or 1000W, whichever comes first. Since our test equipment's limits are higher than that of the OCZ ZS750, we can test it to the maximum. 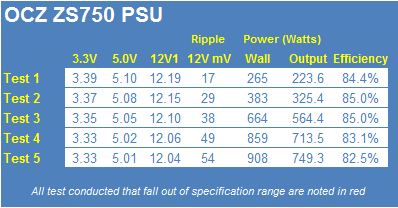 The OCZ ZS750 does a decent job at voltage regulation for a budget power supply. The unit was able to stay within 2% of specification on both the 5V and 12V rails. This went up a little bit higher on the 3.3V rail as the unit started out in Test 1 showing a maximum of 3.39V. All of the voltages were well within ATX specifications and nothing to be worried about.

DC output quality certainly isn't one of the strongest areas for the ZS750, but it did pass the ATX specifications. The unit started out showing a 17mV ripple on the oscilloscope during Test One and it steadily increased as the loads were ramped up. By Test 3 we were seeing nearly 40mV of noise on the 12V rail and this continued to climb up to 54mV during the full loads of Test 5. We'd like to see better, but you can only get so much out of a sub $100 power supply.

The OCZ ZS750 comes with an 80Plus Bronze efficiency rating, meaning that it must be 82%/85%/82% efficient at 25%/50%/100% loads respectively. Our test unit started off strong with an efficiency of over 84% during Test 1, but seemed to flirt with falling out of specification the rest of the way. In the end, all that matters is that the unit passed our tests and showed that it was worthy of the rating.

As we have seen with several of our recent power supplies, there are certainly some sacrifices that must be made when you are powering a PC on a budget. There is a constant struggle between efficiency, output quality and regulation. Finding the balance between them is the real challenge for making sure the money is well spent.

With the results shown by our tests today, we have to say that OCZ has done a great job with the ZS750. They really have found the "ideal blend of quality, performance and efficiency for power hungry desktops." 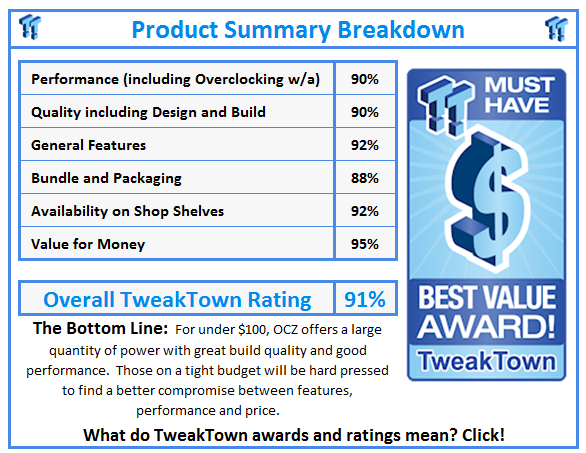