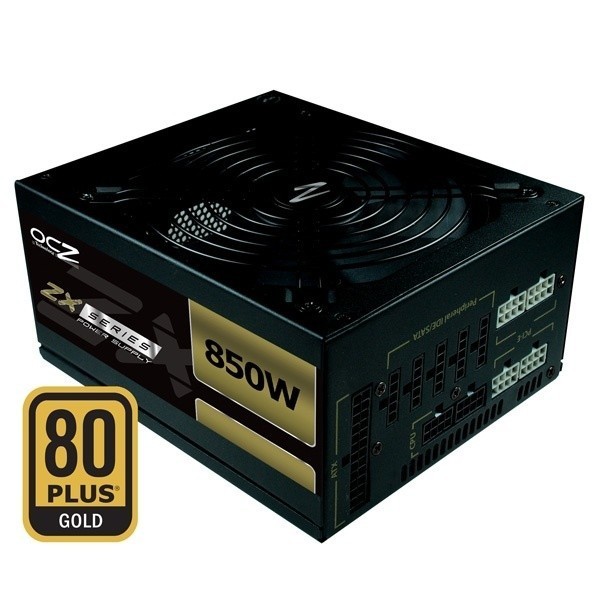 OCZ Technology has expanded rapidly over the last decade. No longer do they simply provide memory products for your computer, but have a vast selection of products to fulfill your computing needs. OCZ has acquired many differing companies in the last several years and have raised the bar in quality computer products. OCZ's purchase of PC Power & Cooling marked the company's dedication in the power supply sector. Most recently, OCZ has released the ZX series of power supplies.

As you can see from above, the OCZ ZX 850 comes with a strong rail setup. The single 12V rail is capable of pushing 70A, which is plenty of power for even a pair of high end graphics cards these days. The 3.3V and 5V rails are equally as beefy for an 850W power supply, with the 3.3V rail rated for 24A and the 5V rail rated for 30A. 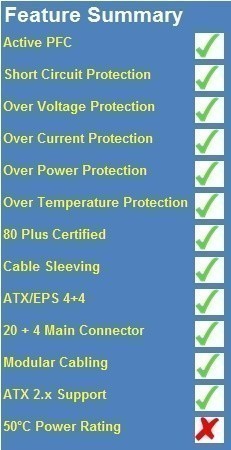 OCZ packs quite a few features into the ZX series of PSU's. As you would expect, OCP/OVP/OTP are present as well as SCP and OPP. All of the cables are modular and sleeved and the 850W version even comes with dual ATX 4+4 connectors should you need it. The ZX 850 is 80Plus Gold certified, providing great efficiency even at full load. The only thing we can find lacking is that the ZX 850 is not rated for 100% continuous output at 50C.

OCZ's ZX 850 is widely available and can be found easily. The ZX 850 PSU comes with an MSRP of $199.99. Newegg is currently selling it $10 cheaper thanks to a mail-in rebate offer. Fortunately it can be had even cheaper than that. At the time of writing this article, the ZX 850 could be found for $179.99 with free shipping and a $10 mail-in rebate dropping down the price to $169.99. That makes the ZX 850 extremely competitively priced in the 850W segment of power supplies. Those purchasing a ZX series power supply from OCZ will also be pleased to know that it is backed by a 5-year warranty. 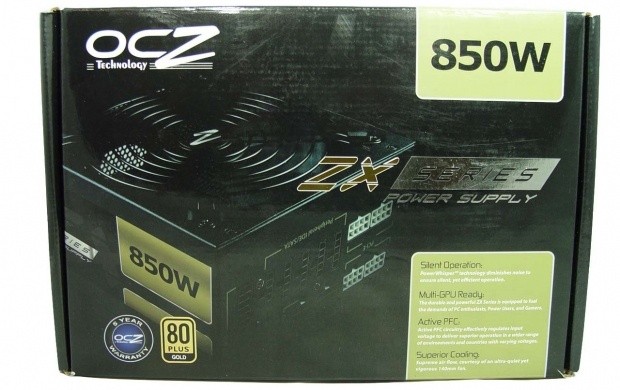 The OCZ ZX 850 comes in black and gold packaging with some great information listed on the front of the box. Wattage, warranty, a picture, and multi-GPU readiness are stated. Those that pay attention to the picture will also notice that the ZX 850 is fully modular. 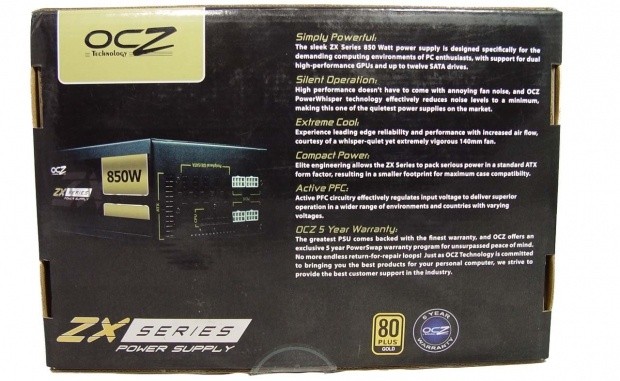 The back shows an even clearer picture of the modular setup than the front does. Unfortunately, there is little differing information on the back than the front and it doesn't really give you much more insight into the PSU and whether or not it fits your needs. 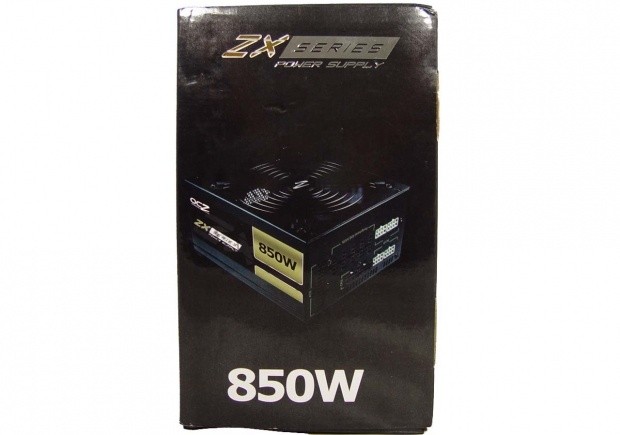 The sides of the box don't help much either as there isn't anything else here.

The bottom gives us a little bit more information about the ZX 850 PSU as it contains the I/O specification label of the unit.

The top of the box grants us even more as it has some technical specifications as well as a connector availability list. Unfortunately the numbers of cables aren't listed and as you will find out later, not all of the connectors can be utilized at the same time. 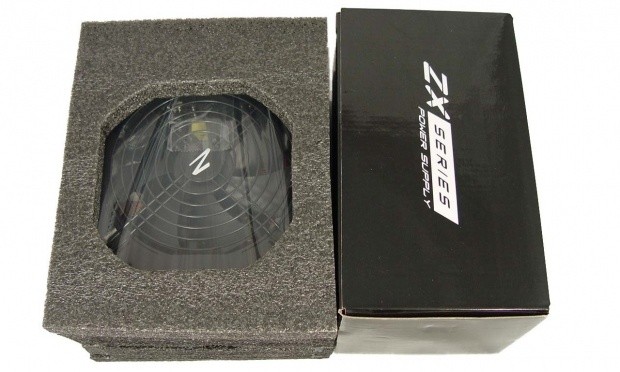 OCZ does a great job packing and protecting the ZX 850 PSU. On the left is the ZX 850 itself, surrounded by at least a 1/2 inch of foam. Over to the right is a box that contains the modular cables, AC power cord, and everything else. 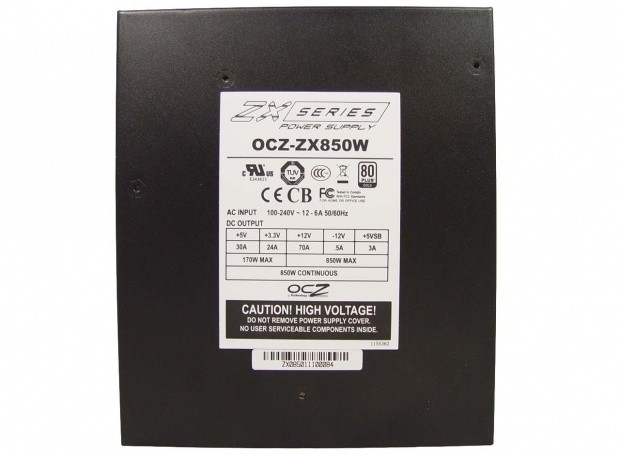 OCZ chose to locate the I/O specification label on the top of the ZX 850. 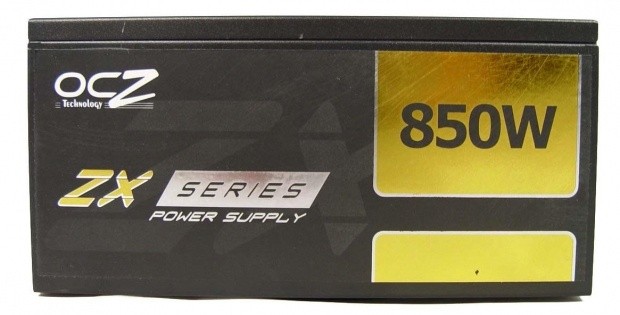 Both sides feature the same ZX series power supply logo and states that it is an 850W unit. 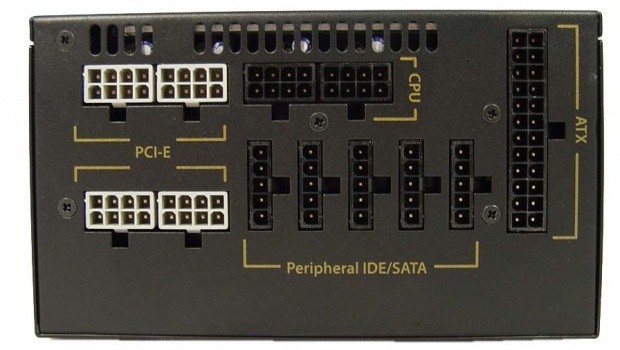 Moving to the front of the ZX 850, we find the modular connections for the cables. Everything is clearly labeled and the PCI-E connectors are color coded so that you don't plug them in where the ATX 4+4 cables connect. 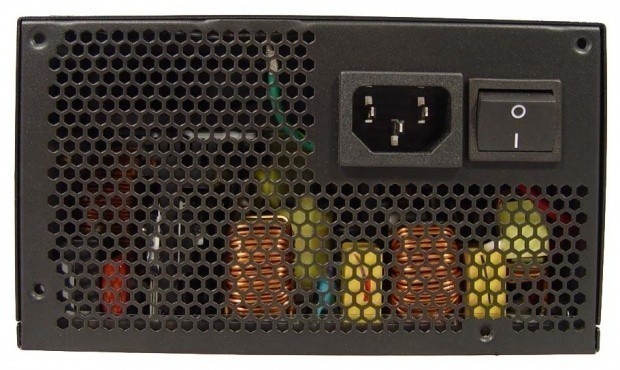 On the back of the power supply, we find the AC input and rocker switch. OCZ uses a honeycomb grill here to vent the hot air out of the back. 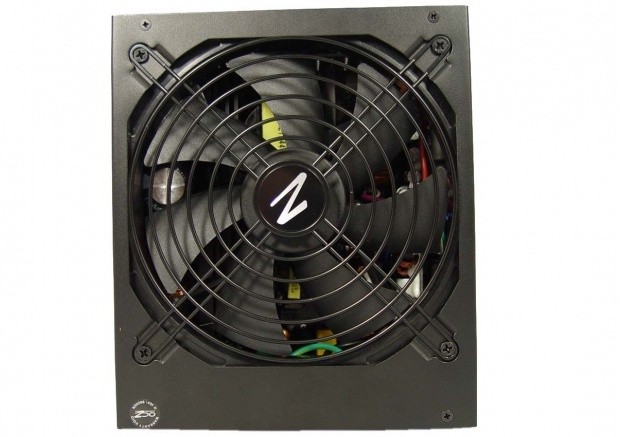 Taking a peek at the bottom, we can see the large 140mm fan with wire grill that keeps the OCZ ZX 850 nice and cool. 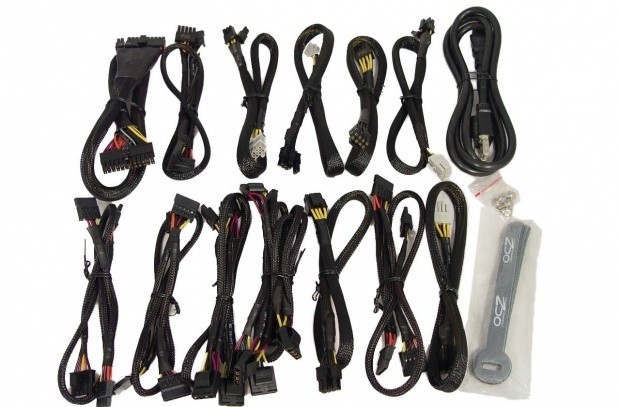 All of the accessories included with the ZX 850 are shown above. Aside from the modular cables and AC power cord, there are four thumbscrews for installing the power supply and some reusable Velcro cable ties.

Also include are the user manual and 80Plus Gold certificate.

At first glance, the ZX 850 offers up quite the connector availability. Motherboard connectors include a 20+4 pin Main connector and a pair of 4+4 ATX connectors. The ZX 850 will power a pair of GPU's with the included four PCI-E 6+2 pin cables. Everything else is powered by a total of 12 SATA connectors, nine Molex connectors, and a single FDD connector. The tricky part here is that there are a total of seven peripheral cables, but only five can be used at any one time. These extra cables offer excellent flexibility in connector availability.

OCZ chose to keep rail distribution and load balancing easy with the ZX series power supplies. Since there is only a single 12V rail, there is little to talk about here. 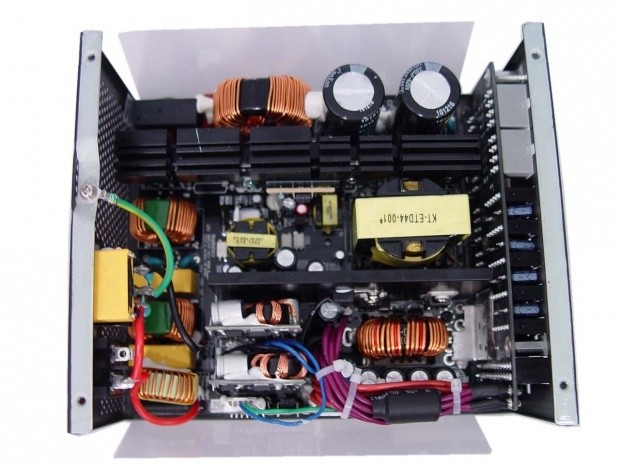 Opening up the ZX 850 may reveal a familiar picture to some of our readers. Inside, you'll notice that the ZX 850 looks almost identical to that of the Sparkle Computer Corp. SCC-850AF. This is because the power supply is manufactured by Great Wall and is based off the same design. Of course, there are a few changes such as the fully modular cable setup. 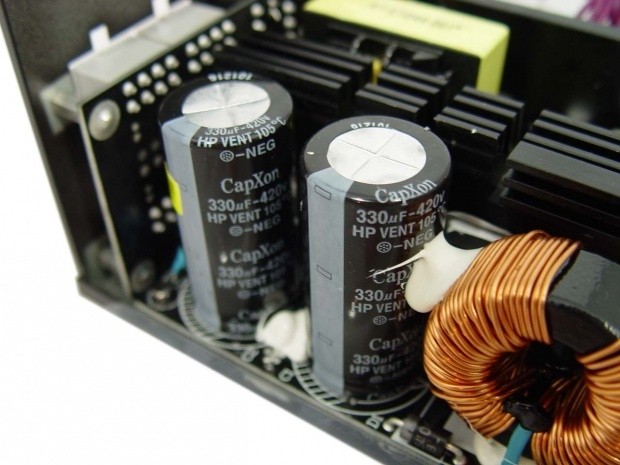 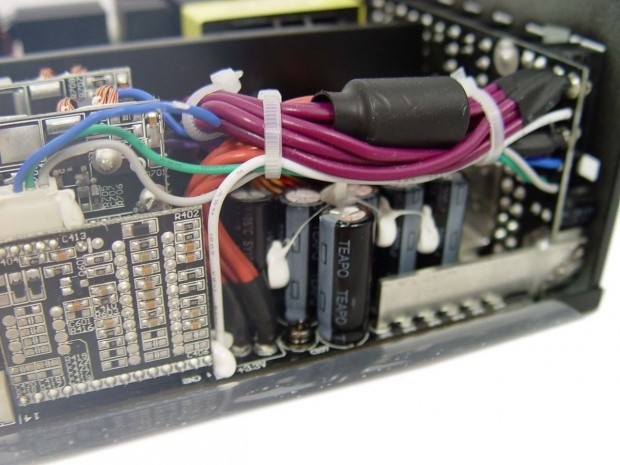 The secondary capacitors are manufactured by Teapo. Teapo is a Taiwanese based company. 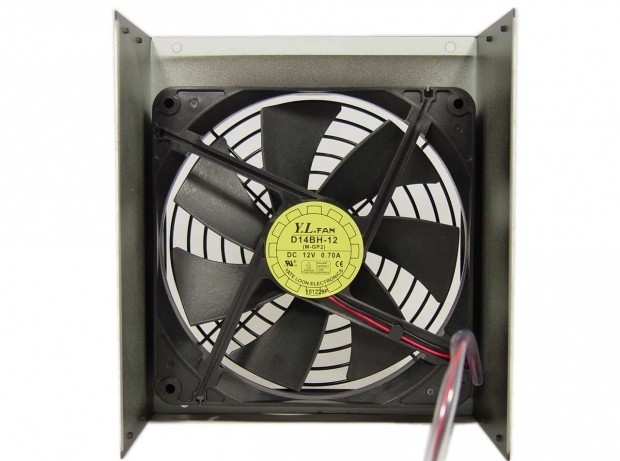 Finalizing our shots of the inside of the ZX 850 is a shot of the 140mm Yate Loon D14BH-12 fan that has been quite popular in many of the power supplies we have recently reviewed.

The tests performed are based around six conceivable setups that are out there and progressively load down the PSU up to the power supply's limits or 1000W, whichever comes first. Since our test equipment's great than that of the OCZ ZX 850, we can test it to the maximum.

After throwing the OCZ ZX 850 power supply through our gauntlet of tests, we were left with a solid set of numbers out of the PSU. Most impressive were the 3.3V and 5V rails. They proved to be rock solid throughout all of the load tests we threw at the OCZ ZX 850. The 3.3V rail didn't budge the entire time and the 5V rail stayed within 1% regulation the entire time. Voltage readings from the 12V rail were excellent as well which stayed within 1% throughout all of the tests. The 12V rail did show the largest delta of our voltage readings, but it is still well within ATX specifications.

As far as efficiency is concerned, the OCZ ZX 850 achieves its 80Plus Gold rating that it is certified for. In order to receive an 80Plus Gold rating, a power supply must be 87%, 90%, and 87% efficient at 20%, 50%, and 100% loads respectively. The ZX 850 starts out well above the mark, but at the end it is cutting it close. It would be nice to see efficiency a little higher under full loads, especially since OCZ markets this power supply towards gamers and enthusiasts alike of which are constantly pushing their systems to the limit.

OCZ has brought an excellent power supply to the market with the ZX 850. That said, we have a few minor discrepancies with the ZX 850. First is the lack of being rated for 100% continuous output at 50C. This should be considered a staple of any power supply that is meant for gamers and/or enthusiasts as they are often the ones putting the power supply under these conditions. Short of the cheaper capacitors used in the build of the ZX 850, the power supply has great build quality. Lastly, it would be nice to see a little more efficiency out of the unit under full loads.

These are of course minor issues with the ZX 850. Throughout all of our tests, the ZX 850 performed quite well and exactly as advertised. Voltage readings were excellent all the way through and the ripple we saw on the 12V rail was equally impressive. Perhaps what sweetens the deal even more is the price. At $169.99, it is one of the cheapest 850W Gold rated power supplies on the market and arguably is more feature rich than the competition with the inclusion of fully modular cables. 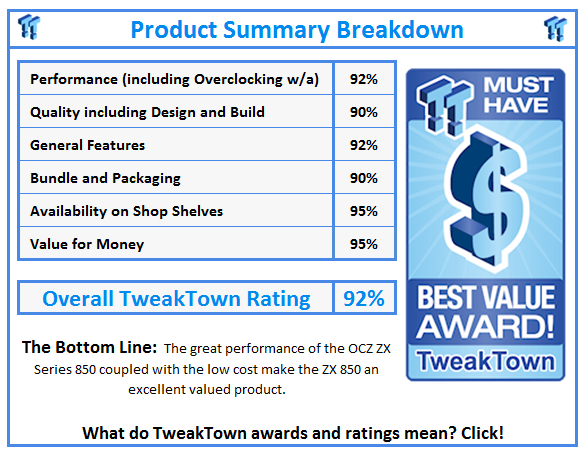