Most of the emails inquired simply because they felt that 1200W was overkill for their needs, but the 850W wasn't enough. We know all about trying to make sure that you put your money in the right places when building a computer so that is why we are here today and taking a look at the SilverStone Strider Gold Evolution 1000W.

It features their Air Penetrator fan that we know operates very quietly, offers 80Plus Gold efficiency and is fully modular. As it is built on the same platform of the other Strider Gold Evolution power supplies, it should produce similar results. If so, the real question today will be not if it is a good power supply, but how much of value the unit is compared to its brethren and if you should gravity towards purchasing the 1000W model over the other two.

Let's dig in and see what we can find out about the Strider Gold Evolution 1000W.

DC output is again very similar to that of the 1200W model. The unit is capable of 83A on the single 12V rail. Both the 3.3V and 5V rails are rated for 25A each. These have a combined total wattage of 150W. Interestingly enough, the 850W model has a combined wattage of 150W on the minor rails as well, but only rates the 3.3V rail for 22A. The same -12V rails and 5Vsb rails are seen throughout the entire series, rated at .3A and 3.5A respectively. That is a bit weak on the -12V rail, but solid on the 5Vsb side. 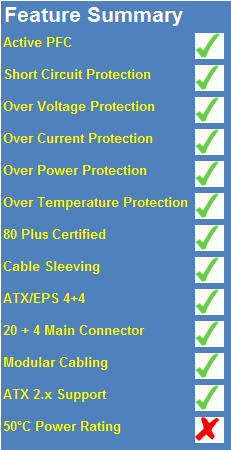 The 1000W Evolution shares the same feature summary as the rest of the Evolution series. It's full of protection features including over temperature protection, but the unit is not rated for 100% continuous output at 50C. It is instead rated for 100% continuous output at 40C. The power supply is fully modular and fully sleeved. The full modular design also allows for the use of SilverStone's PP05 short cable kit. 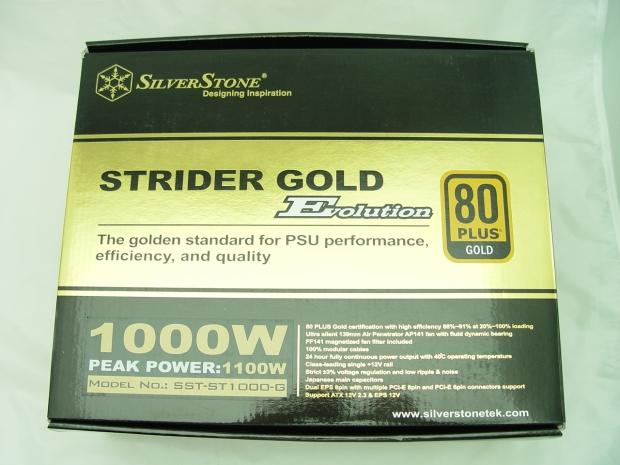 The same black and gold packaging is used for the SilverStone Gold Evolution series. There is a short list of features on the front. 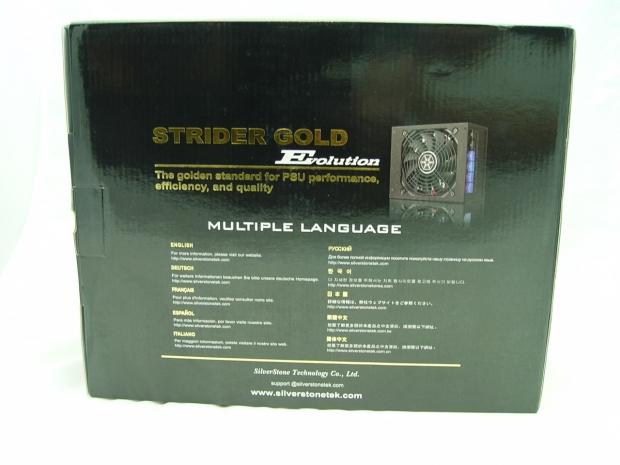 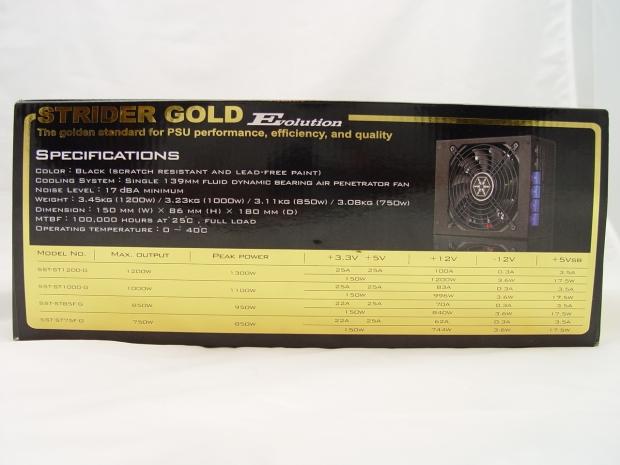 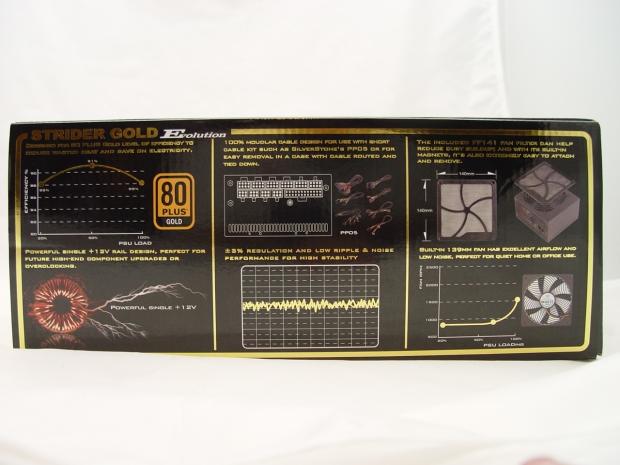 The bottom has some more information about the unit including compatibility with the PP05 short cable kit and the included fan filter. Also pictured is their Air Penetrator fan with results in quieter fan operation. 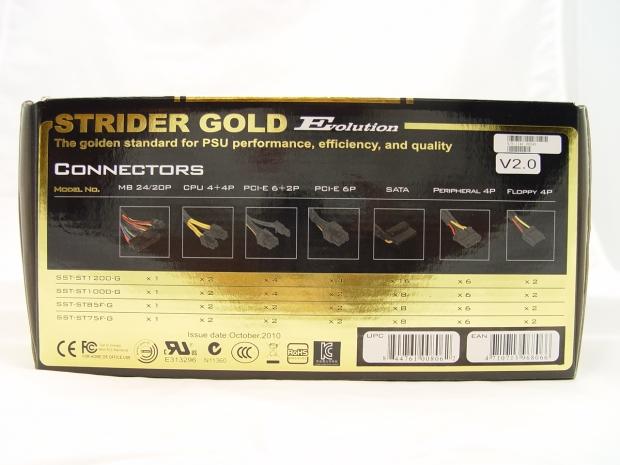 One side has a good list of connector availability for the unit. The big difference between the 850W, 1000W and 1200W models is the number of PCI-E connectors. The 1200W model also has double the SATA connectors. 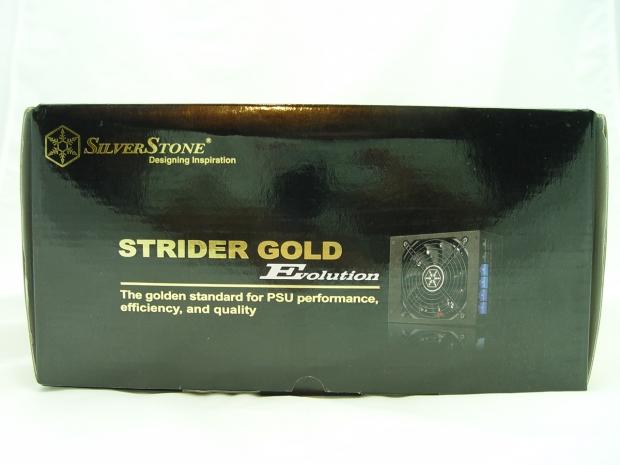 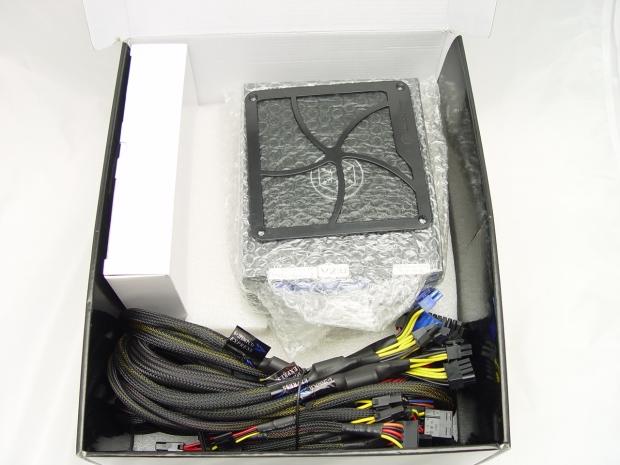 The unit is packed well inside the box with an inch of foam above and below the unit. Modular cables and accessories take up the rest of the space and make for a snug fit. 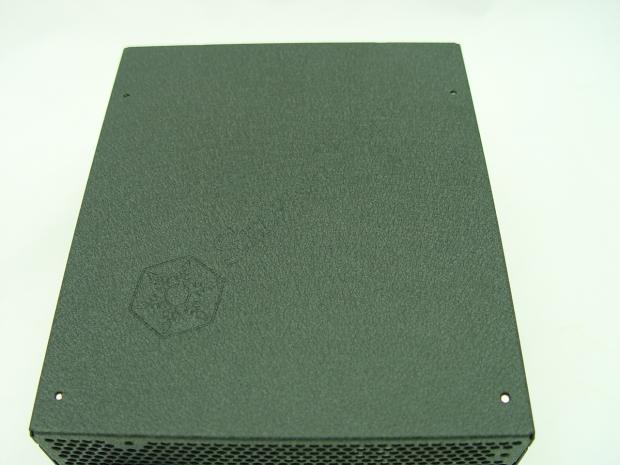 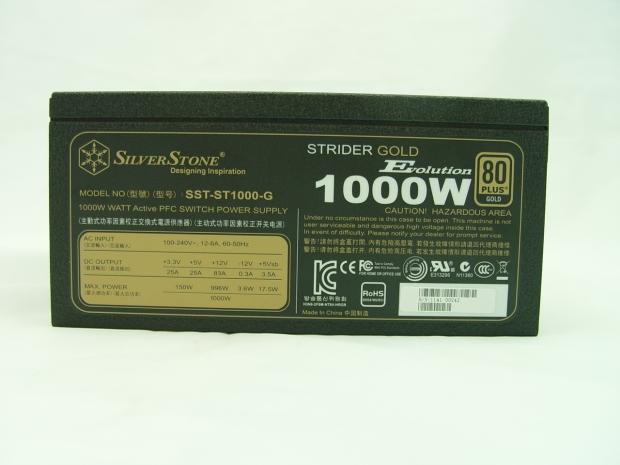 One side of the power supply displays the I/O specification label and serial number. 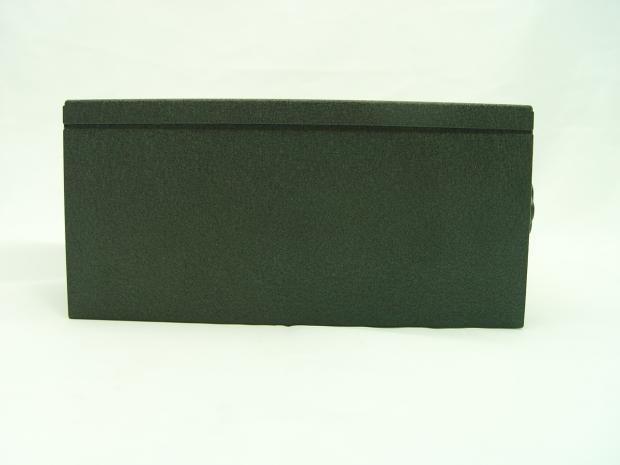 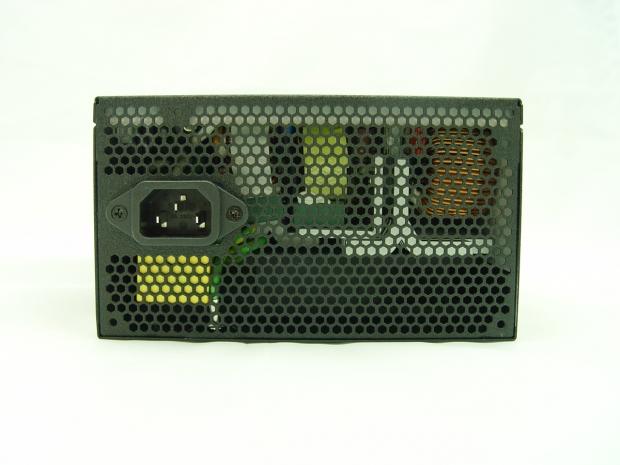 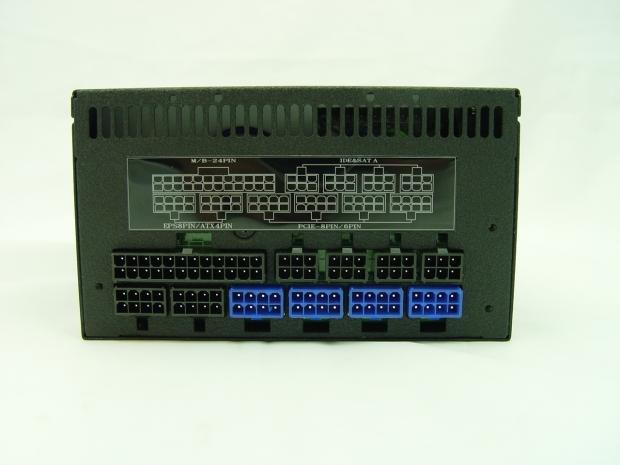 The back houses the standard honeycomb mesh grill. There is no on/off rocker switch for the unit. If you want to kill the power to the PSU, you must unplug the power cable. 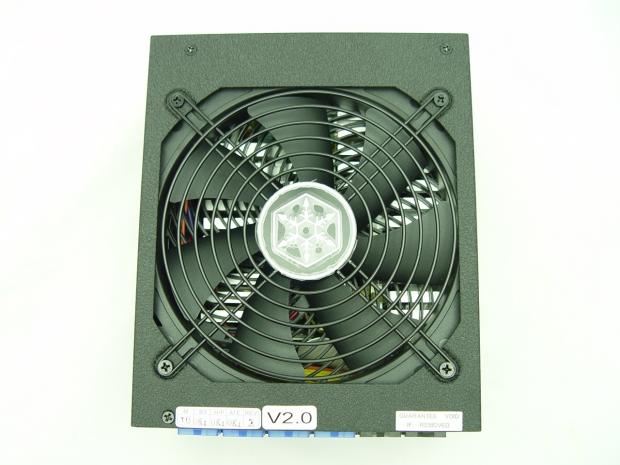 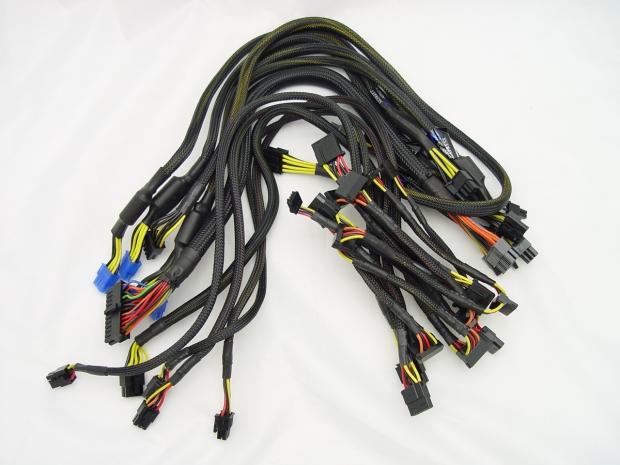 The 1000W is the middle of the road when it comes to cables. There are quite a few more with the 1200W, but just one less with the 850W. The PCI-E cables have additional capacitors soldered inline to help reduce GPU whine. 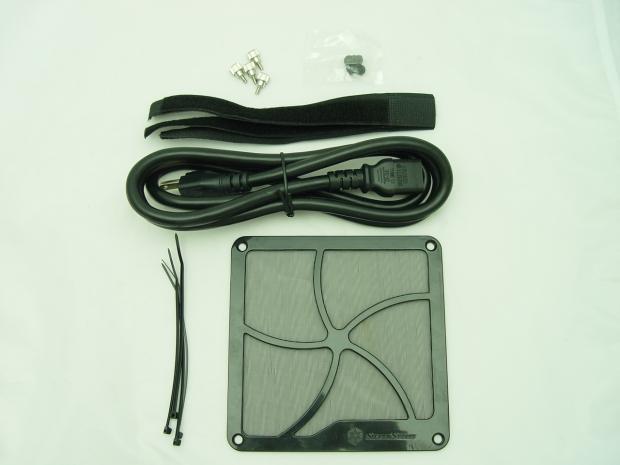 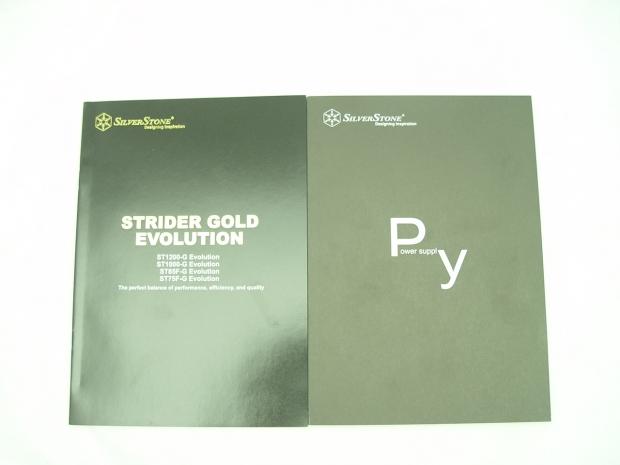 Also included with the unit are two user manuals. The one on the left is a generic manual in multiple languages while the manual on the right is contains specifications just for the Strider Gold Evolution series of power supplies.

The ST1000-G Evolution remains 100% modular. It has the standard 20+4 pin Main connector as well as dual ATX4+4 connectors. PCI-E Connectors come in the form of two 6+2 pin cables and two cables with one 6+2 pin and one 6 pin connectors. Peripherals connections are handled by a total of 8 SATA, 6 Molex and 2 FDD connectors over four cables. Those seeking shorter cables will be interested in the PP05 short cable kit. 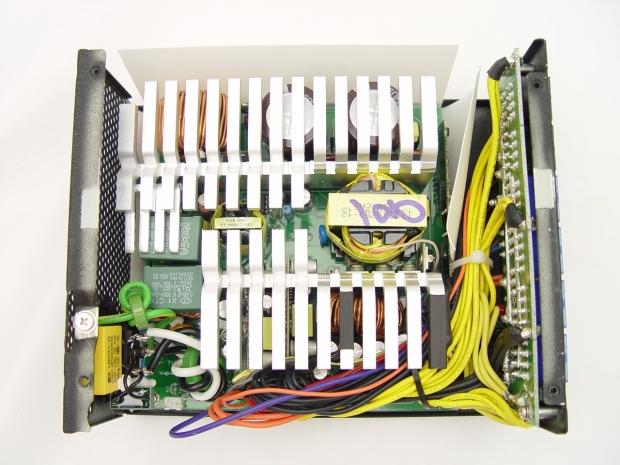 SilverStone uses the same heatsinks that are used on all models in the series and provide more than sufficient cooling for this unit. 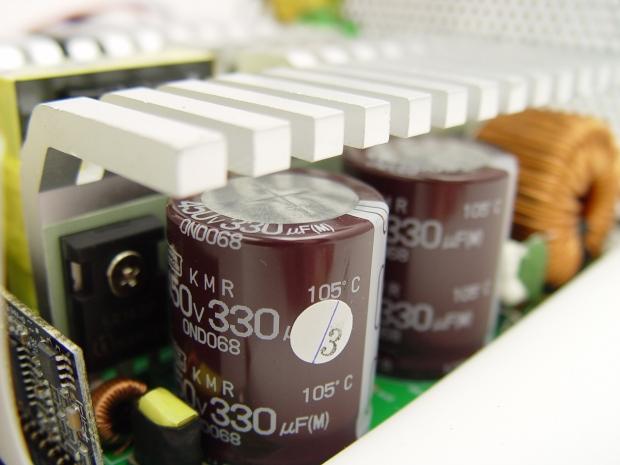 A pair of Nippon Chemi-Con caps covers the primary side of the SilverStone Strider Gold Evolution 1000W. 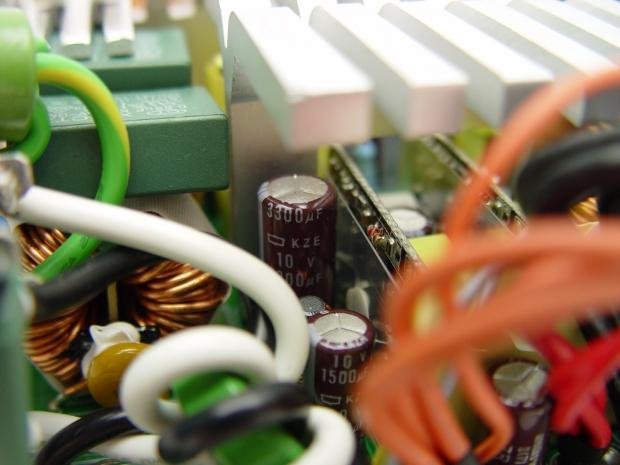 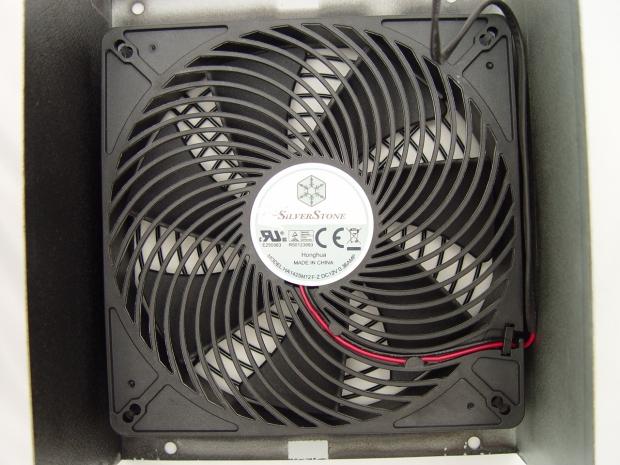 Cooling for the unit is provided by the same SilverStone's HA1425L12F-Z fan. SilverStone claims the grill increases airflow and reduces fan noise. We could not discern the power supply above the noise of our test equipment and never had any problems with temperatures during testing.

The tests performed are based around six conceivable setups that are out there and progressively load down the PSU up to the power supply's limits or 1000W, whichever comes first. Since our test equipment's limits are the same as the SilverStone Strider Gold 1000W, we can test it to the maximum. 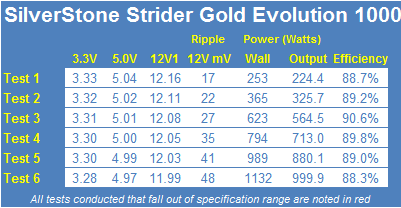 DC output quality was close to what we expected and better than what we saw with the 1200W model. We started off seeing 17mV of ripple on the 12V rail during Test 1. As we increased the loads, the ripple had increased to 27mV at a little over half load. By the time we had the maximum load of 1000W we were seeing 48mV of noise.

Once again, we see great performance with the SilverStone Strider Gold Evolution 1000W. While the results that are shown are a tad bit better in the voltage regulation department than we've seen in the past, the DC output quality is a tad bit worse.

Overall, we feel it is safe to say that differences are due to the differing tolerances in the individual components that make up the entire PSU just the way that some CPU's overclock better than others of the same part number. The SilverStone Strider Gold Evolution series is filled with a fantastic line of power supplies no matter which one you choose.

The great thing about it is that SilverStone does a great job of making sure that you don't have to overspend to get what you need. The 1000W unit sits perfectly between the 850W and 1200W models in both wattage and price. It is the final nail in the coffin that proves you will receive a quality, enthusiast grade, power supply no matter what one you choose.

Rest assured that the 1000W SilverStone Strider Gold Evolution power supply is just as good of a bargain as the rest of them and if you're torn between the three, all you need to do is calculate your wattage needs to make the choice. 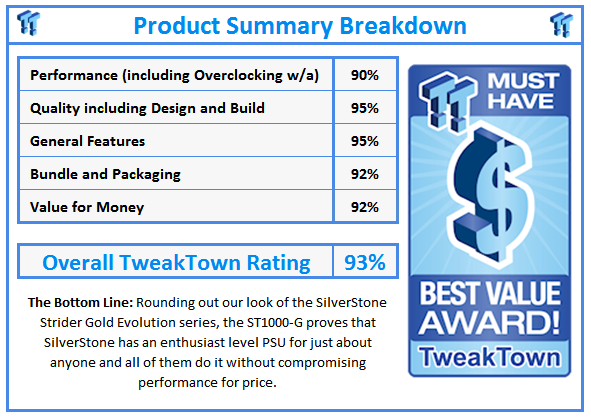