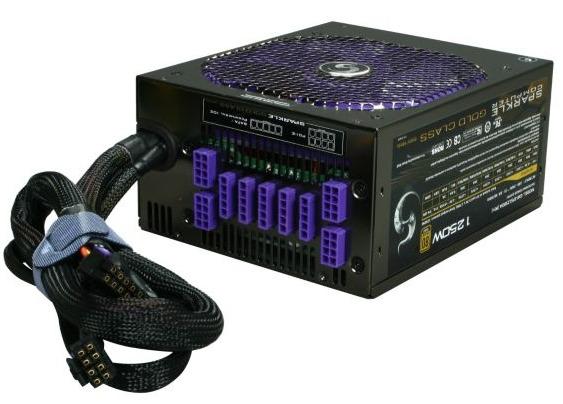 Now that we have taken a look at a power supply on the lower end of the Wattage spectrum with the Kingwin LZP-550, we are going to take a look at something capable of more than doubling that out. The unit that we have sitting on the bench today is from Sparkle Computer Corp. We have taken a look at several of their power supplies in the past with the SCC-750AF and SCC-850AF. Both units scored really well and we are expecting the very same out of what we are testing today.

The unit that we are testing today is the GW-EPS1250DA power supply. It is the third model in their Gold Class line of power supplies that we have managed to test to date and is manufactured by Great Wall, just as the others have been. This unit offers enough power for up to three graphics cards and still has plenty of power to spare for additional peripherals. The unit looks quite impressive on paper featuring six 12V rails, 100% continuous output at 50C and more.

Let's look a little deeper and see what the unit has to offer.

The sextuple 12V rails dominate the I/O specifications table for the Sparkle Gold Class 1250W power supply. While each of the rails is rated for 20A each, they have a combined maximum output of 104.2A or 1250W. The Gold Class 1250W power supply also features two rather beefy power minor rails. Both the 3.3V and 5V rails are rated for 30A of power each with a combined maximum output of 170W. 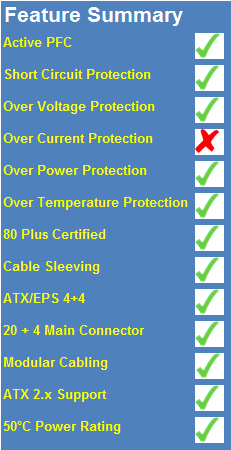 Sparkle's Gold Class 1250W power supply has almost a complete list of features. It has native and modular cables, full sleeving and 80Plus Gold certification. The power supply also has a nearly complete list of protections, with over power, over voltage, under voltage, short circuit and over temperature protections. Oddly enough, it doesn't have over current protection and we'll get into that a little bit later.

Sparkle still doesn't have very deep market penetration as we have seen from the likes of Antec or Thermaltake. Nevertheless, the unit can still be found at Newegg and Amazon. Both places list the unit for $279.99 with free shipping. Those concerned about the warranty will be glad to know that the Sparkle Gold Class 1250W power supply comes with a 5-year warranty, one of the highest in the industry. 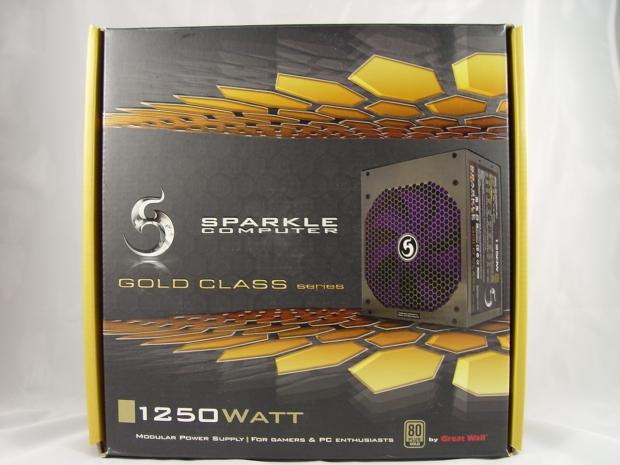 The 1250W power supply uses the same box and packaging that we saw with the previous two Sparkle units. Things are kept rather simple on the front of the box. 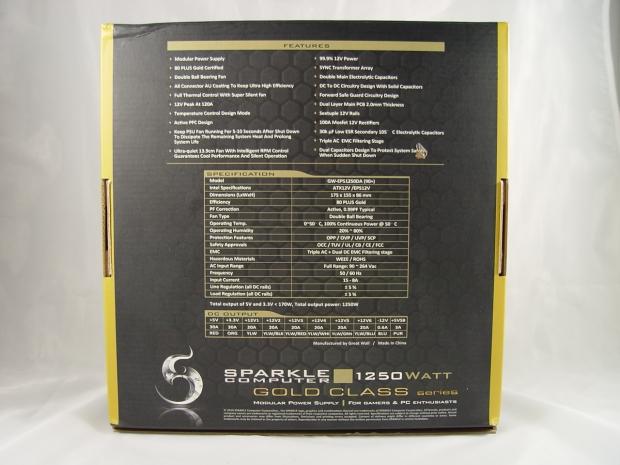 Turning things over to the back, we find a very clean and clear list of features and specifications for the unit. The DC Output table even identifies the color of the wires for the individual rails on the unit. 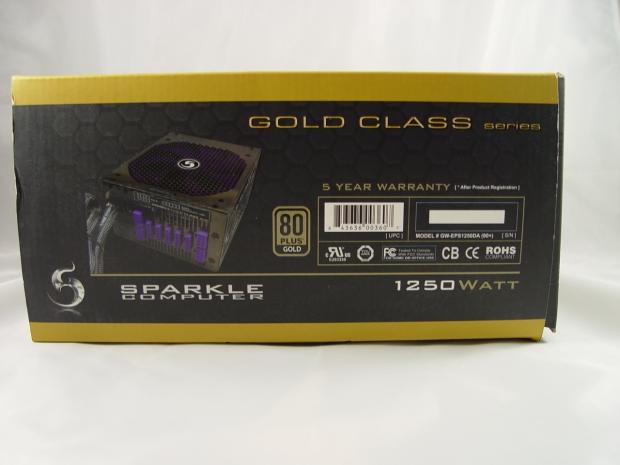 One side of the box gives us the warranty information and another shot of the power supply. 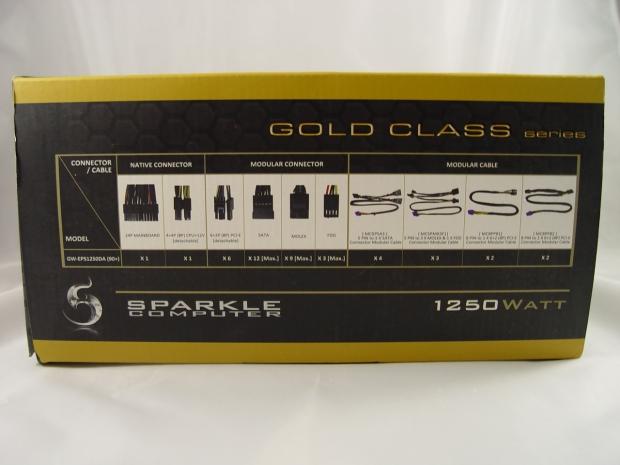 The other side gives us a great list of connector and cable availability. Unfortunately it doesn't give us lengths for the cables here. 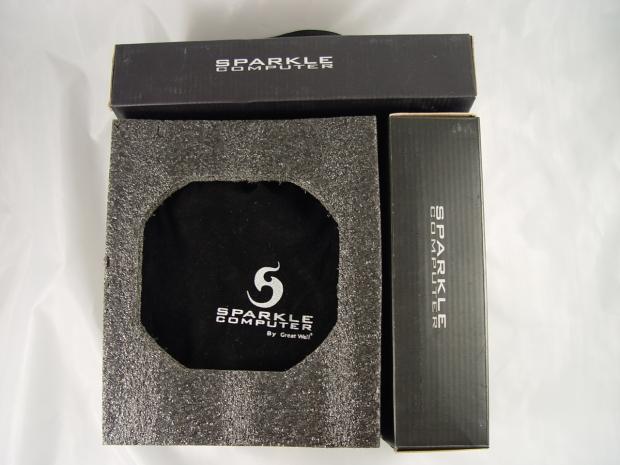 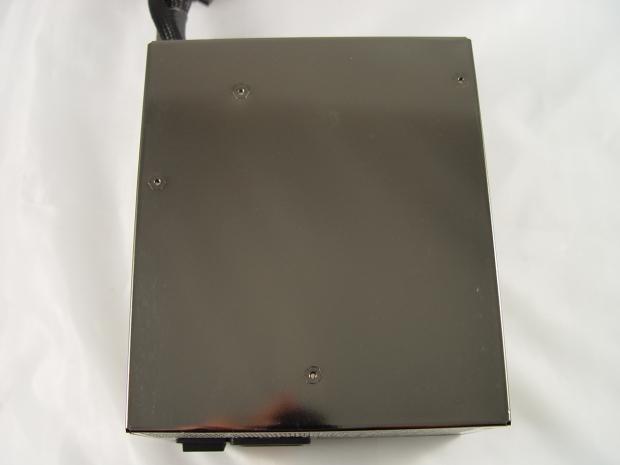 The top of the unit is a blank slate, but does give you a great idea of the dark bronze highly reflective finish that the power supply has. 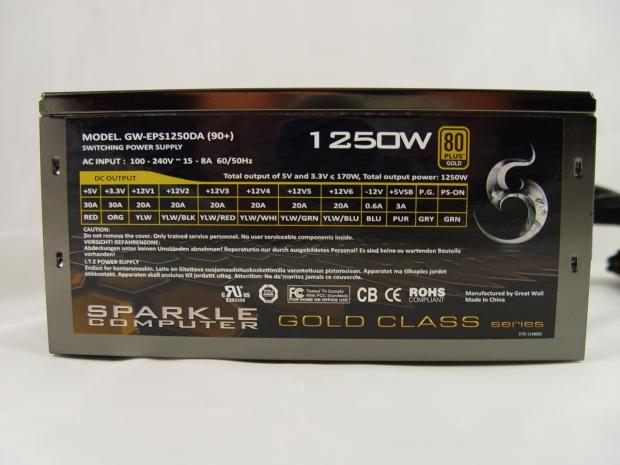 One side of the power supply displays the I/O specifications. The color coding for the individual rails are listed here as well which will make it nice to reference when installing the PSU. 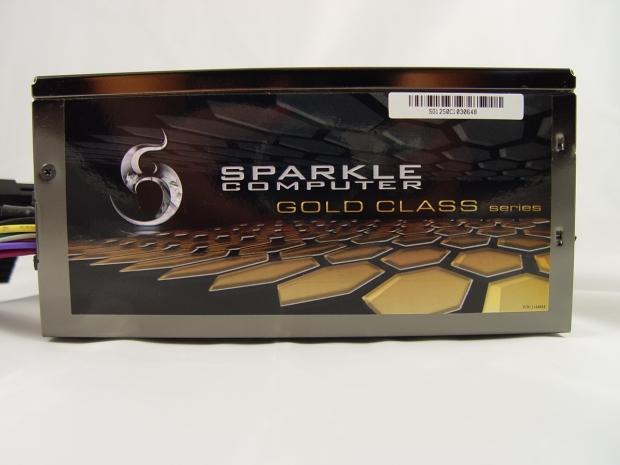 The other side simply features the Sparkle Gold Class logo and serial number. 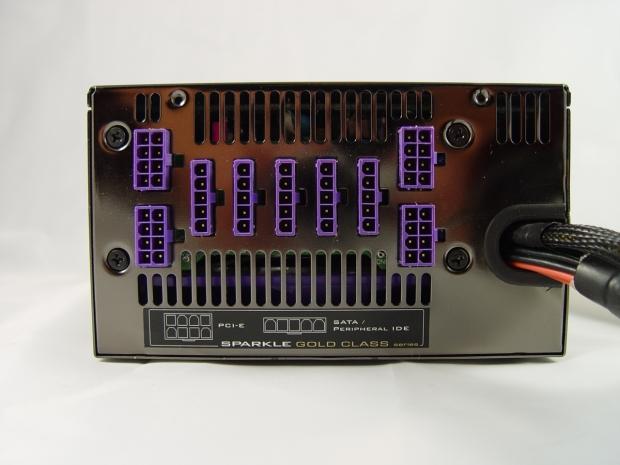 Here we can see the modular connections and additional venting that the front of the power supply has to offer. 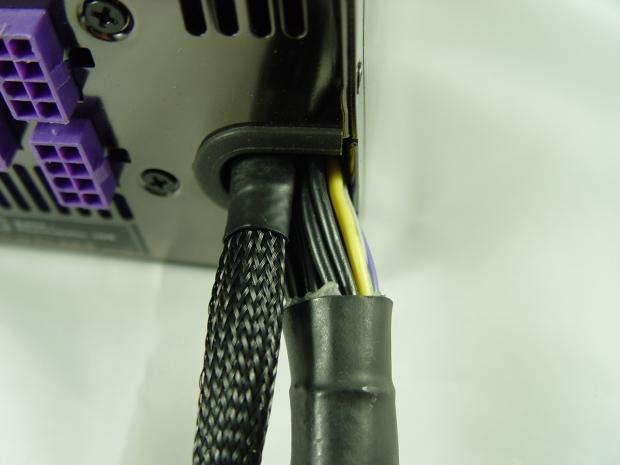 Oddly enough, the sleeving for the Main connecter ends just prior to entering the power supply, but goes all the way in for the ATX 4+4 connector. 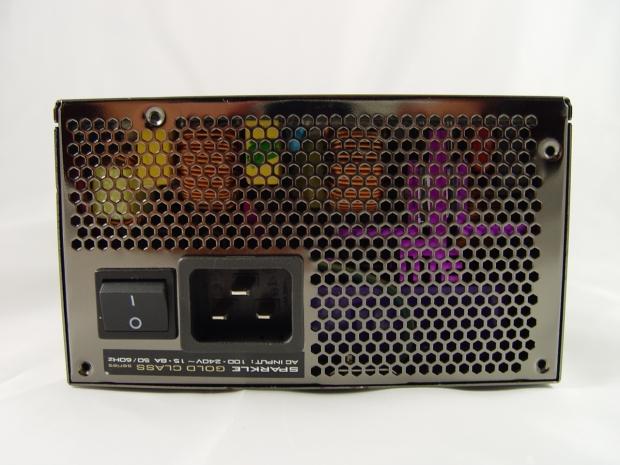 The back of the power supply features the standard honeycomb mesh grill and on/off rocker switch. The power plug looks a bit different, though, and isn't your standard connector. 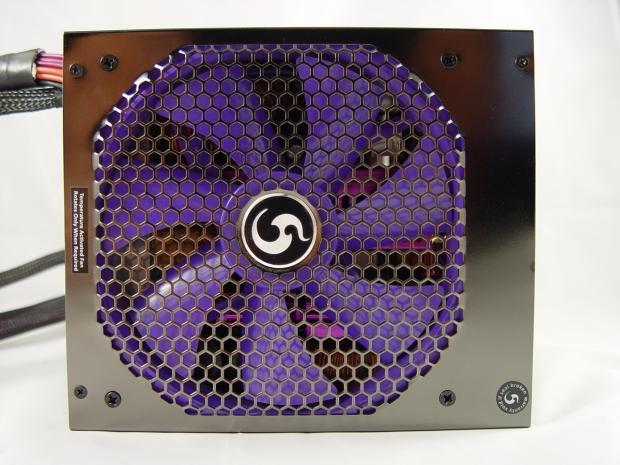 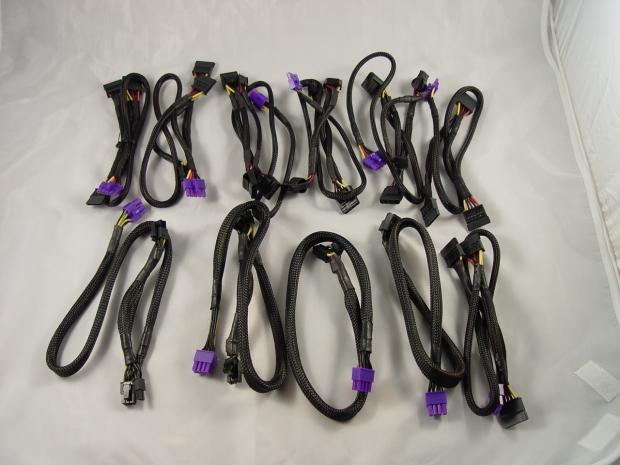 The Gold Class 1250W power supply comes with plenty of modular cables to fill all of the open slots on the front of the unit. 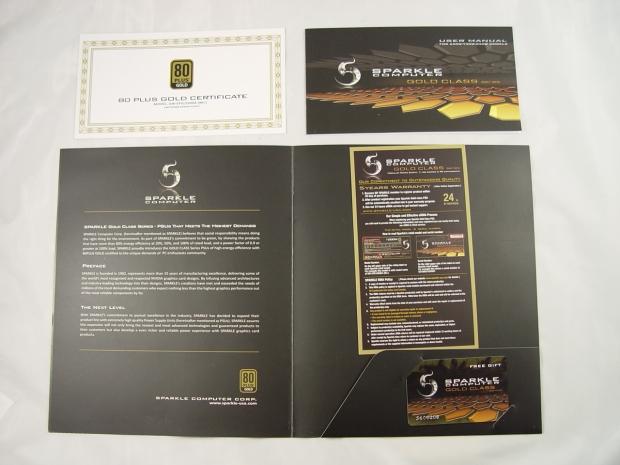 Sparkle also includes a folder of paperwork with their power supplies. Here we can see the 80Plus certificate, user manual, warranty card, free gift card and folder that it all comes in. 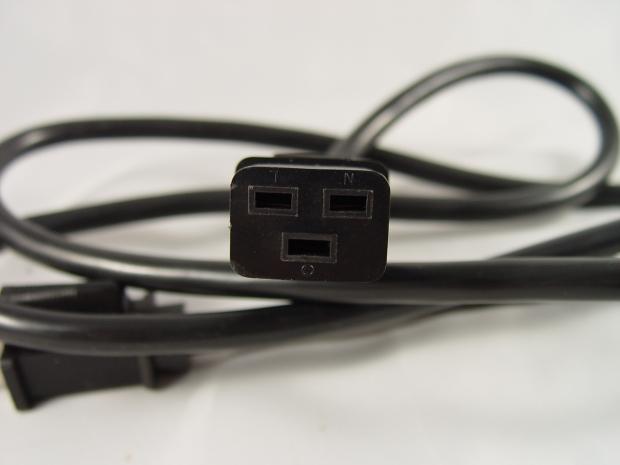 We snagged a close up of the power cable for this unit. Instead of the typical C13 style connector that most users are used to seeing, we find the C19 style. It is meant to be used in higher current situations than the C13 style, which is very probable when you are outputting 1250W.

Sparkle does a great job including plenty of cables to make sure you can mix and match cables to meet your specific needs. Unfortunately there are a few issues here that they should have addressed with a 1250W unit over the rest of the Gold Class line.

Being a 1250W unit, you would expect two things in particular, and a third that is a personal preference. The first would be the inclusion of dual ATX 4+4/ EPS12V connectors/cables and there is only one. The second issue with the cables that should be addressed would be to provide enough connectors to power quad GPUs. All it would have taken were a few extra cables to solve this issue.

The third is that you can only have five peripheral cables connected at any one time. With this much power, it would be nice to plug in a few extra cables. Some may think that the rails aren't strong enough to handle that much power across all of them and that's why we need to look at things below.

Yes, this is the rail distribution for their six 12V rails on the Gold Class 1250W power supply. There is actually only a single rail for the unit. The lack of over current protection made us curious and there are no over current shunts on the unit. On top of this, even though there are clearly six different spots for the 12V wires to terminate and they are all color coded accordingly, they still all terminate to the same location.

This brings up two more things that relate to the rail distribution and cabling. It is really pointless to label the color of wire for individual rails on a modular power supply when the color coded wires terminate on the inside of the unit. It makes more sense to label the actual modular connectors. It also doesn't make much sense to use multi-colored 12V wires when there is only a single 12V rail anyway. 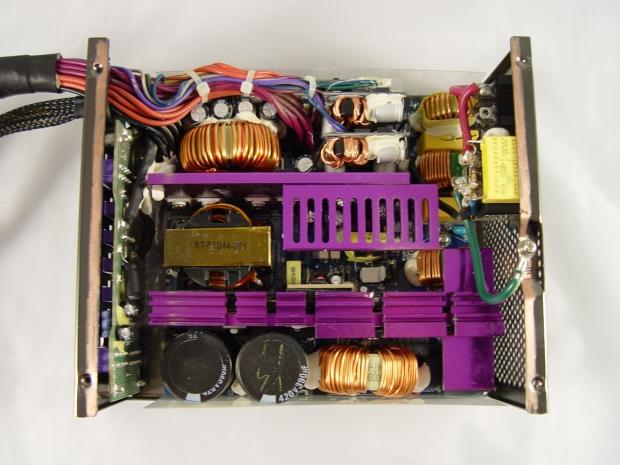 One thing that we noticed right when we opened the unit up was that things were a little bit dusty. Pay attention to the next few pictures and you'll notice that Sparkle actually sent us a used unit to test with. We generally frown upon this as it is easy to get a sample that an engineer has tweaked in some sort of manner, however our unit didn't appear to be tampered with in any way that we could discern. It simply appeared to have been used on a bench for many weeks. 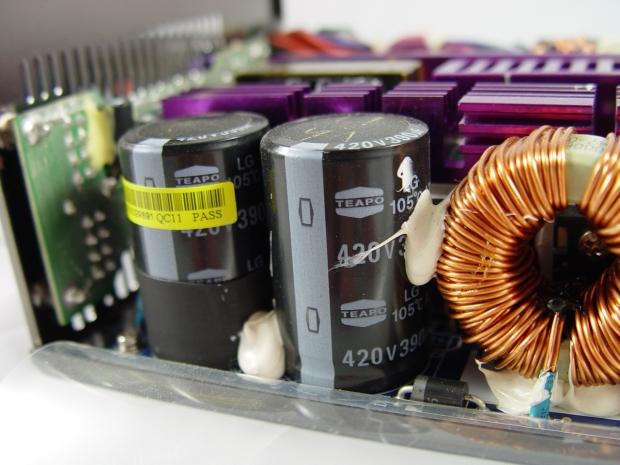 The primary side features a pair of 105C rated Teapo capacitors. While it is always nice to see 100% Japanese capacitor construction, we haven't ever had any problems from Teapo caps. In fact, they have always done really well. 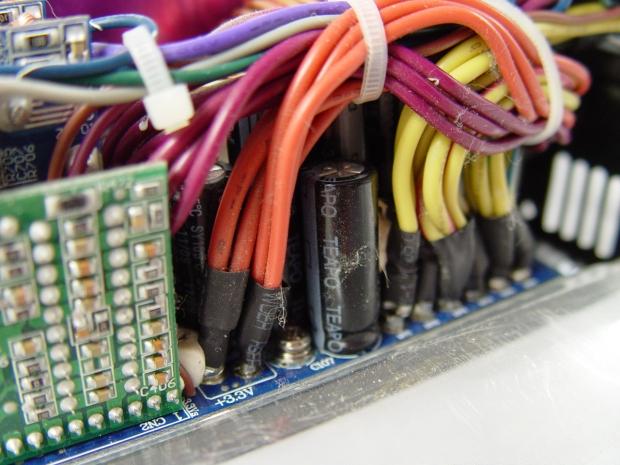 There is quite a bit more dust present here as well. It actually looks like there is something growing on the Teapo capacitor, but it's just a rather large dust bunny. You can also see where the six groups of wires terminate and form the single 12V rail. 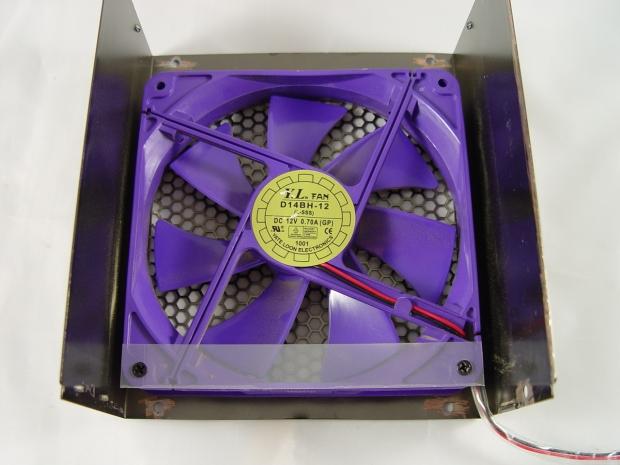 The ever popular Yate Loon D14BH-12 makes a return here to cool the Sparkle Gold Class 1250W power supply. You can clearly see the line of dust on the side of the PSU enclosure and the dust that is built up on the fan after more than a few hours of use.

The tests performed are based around six conceivable setups that are out there and progressively load down the PSU up to the power supply's limits or 1000W, whichever comes first. Since our test equipment's limits are lower than that of the Sparkle Gold Class 1250W, we can only test it to 1000W. 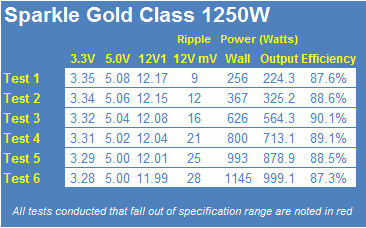 The 1250W unit from Sparkle showed absolutely spectacular DC Output quality that was better than we could have imagined. Test 1 started off with a barely discernable 9mV peak to peak ripple on the oscilloscope. This ripple less than doubled when we more than doubled the loads through Test 3. At this point we saw a 16mV ripple and were quite impressed. Moving all the way to our test at 1000W, the noise on the 12V rail had only climbed to 28mV. This is less noise than what our last Xigmatek unit STARTED at.

The efficiency that we saw out of the unit was probably the weakest point of the unit. In order to achieve the 80Plus Gold certification, a power supply must show 87%/89%/87% efficiency at 20%/50%/100% loads respectively. The unit did rather well up until the last test and was nearing the lower limit as we approached 100% load.

While we don't have the equipment to test the Sparkle Gold Class 1250W power supply to its limits, there are several conclusions that it is safe to say about the unit. Given the results that are shown above, there is no reason that the power supply would have failed either the voltage regulation or DC output quality tests. The unit was however nearing the lower limits in order to pass the efficiency test, but it is uncertain as to whether or not it would have failed.

The Sparkle Gold Class 1250W power supply is a unit that very few enthusiasts will ever even have a true need for. It is capable of delivering a ton of power and is something that you will probably find on more wish lists for dream computers than you will actually see in use. For those that do find a need for such a power supply, they will most likely find that the Sparkle Gold Class 1250W power supply will fit the bill provided that they don't run into the issues with the lack of cable/connector availability that we discussed earlier in the review.

Performance of the power supply was spot on for the most part. You really can't ask for more out of the voltage regulation and the DC output quality was off the charts, especially for a unit with such high output. The efficiency could have been better and you can certainly tell that the unit's design for high efficiency is being stretched to the limit as it neared full load. 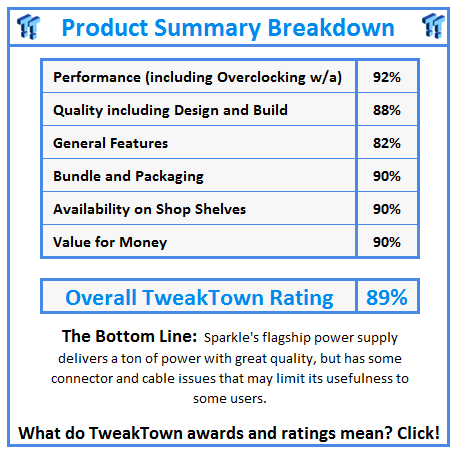