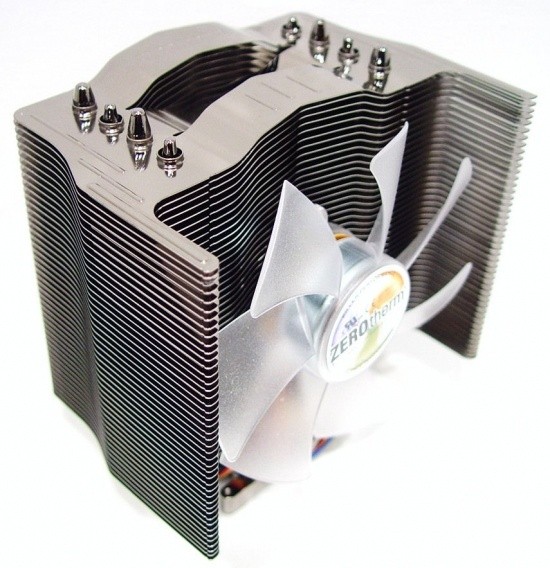 
When I hear the name ZEROtherm it immediately takes me back to seeing the images of the "butterfly cooler" all over the net. This copper and red CPU cooler was quite the step away from the "norm" of cooler manufacturing and has put ZEROtherm on the map. The BTF series of coolers were brought up as that cooler shows how the company took a basic idea and kept improving upon it until they had an effective all copper version with a 92mm fan, eventually replacing the 80mm they started with.

Onward into building bigger and better things, they went with the ZEN series, moving up to a 120mm fan to cool things off and using an all copper base and heat pipes to draw heat into aluminum fins. This was a uniquely designed, tower style cooler that utilized a clip on fan to do the work. These are all great ideas that we have seen most manufacturers using up to this point. So why not keep with the trend?

As the evolution continued, it brings us to today's sampling, the NV120 PWM from ZEROtherm's Nirvana series. While taking its basic design from its older brother, the ZEN, the Nirvana offers a couple of things that the ZEN was lacking. Time to get down to business and see how well this 120mm cooler can handle the T.E.C.C. with the changes of a coating, built in fan and more surface area. 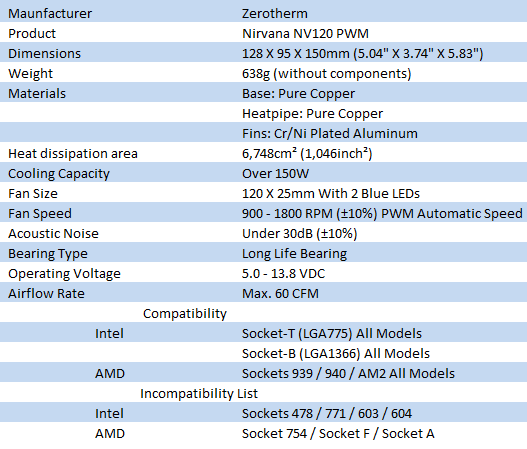 The NV120 PWM follows form with its copper base and four 6mm heat pipes all the way down to the aluminum fins. Where the Nirvana stands out from the rest of the ZEROtherm lineup is in the complete coating of chrome and nickel. Weighing in at 638 grams brings its overall weight down from the ZEN series. I account to the lack of all the excess plastic of the fan and just a touch less fin area to most of the weight loss. While the fins do resemble the ZEN, the Nirvana is coated as well as "wings" on the edges to help add fin area and protect one from the fan.

Speaking of the fan, this open air design does leave two ends open, so watch those fingers. Otherwise the fan is pretty nice. The hub houses two blue LED's that light up when in use and offers up to 60 CFM of cooling power. While this cooler is rated for over 150W, the lower CFM may make this not the premium answer for that solution.

Finding this cooler in the U.S. is pretty tough currently. I was able to locate one shop that, while on Google showed stock of it for $77, when I clicked the link, the site was temporarily down. Continuing on my search I did find that the NV120 PWM is widely available in the Australian market anywhere in the realm of 80-120 AUD. Even further investigations showed the EU market also has this in stock and about at the same price point as the AU market. Converting that over dollar for dollar scares me a bit! Even the $77 USD price I found was a bit excessive in my opinion. 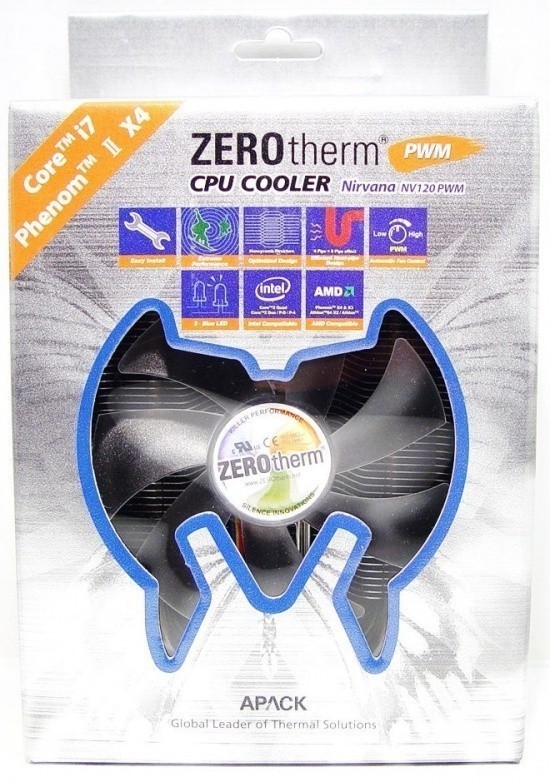 The front of the NV120 PWM shows its heritage with a window to see the cooler that is shaped like a butterfly. Around this window is a white and silver package with bright orange splashes to highlight the features. 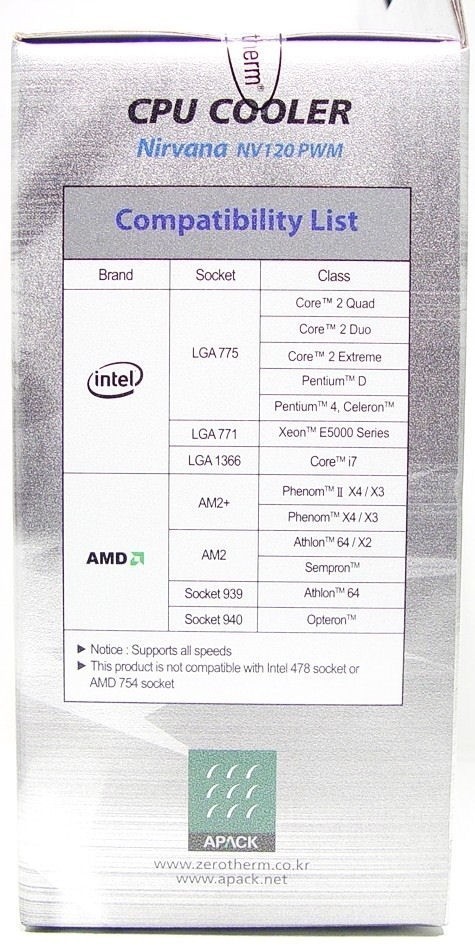 The right side has the compatibility list and as you can see I missed the AM2+ on the chart I made. This cooler will handle any LGA775 or LAG1366 from Intel and socket 939 and up on the AMD side. 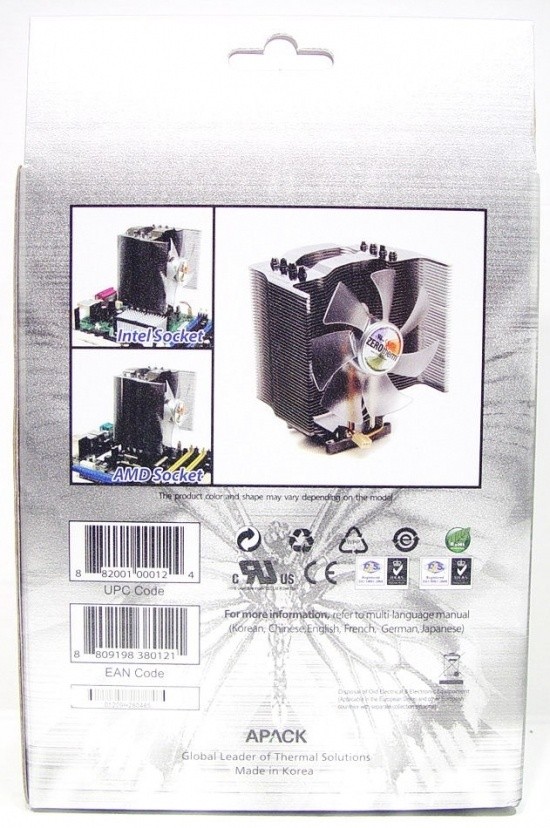 The rear houses images of the NV120 in 3 poses, one on an Intel board, one on an AMD board, and one all by itself, so you can see what you are getting inside. 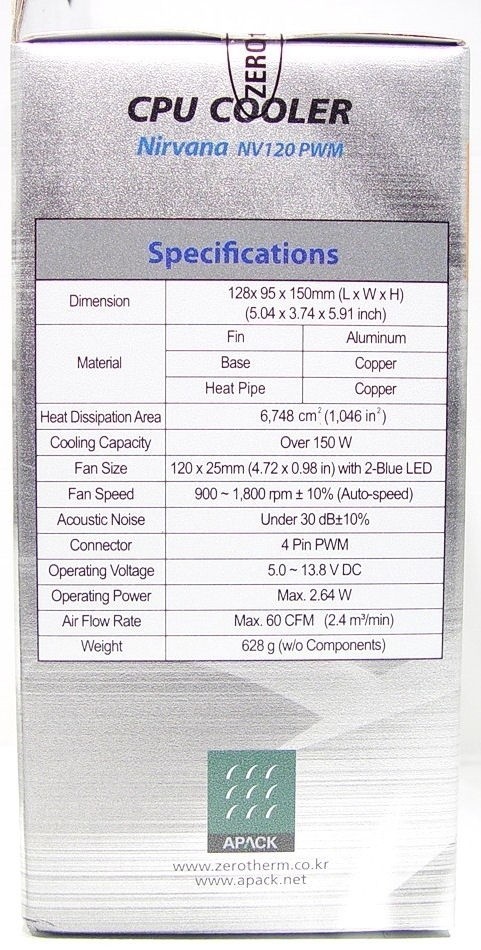 That leaves us with the specifications on the left side of the packaging. 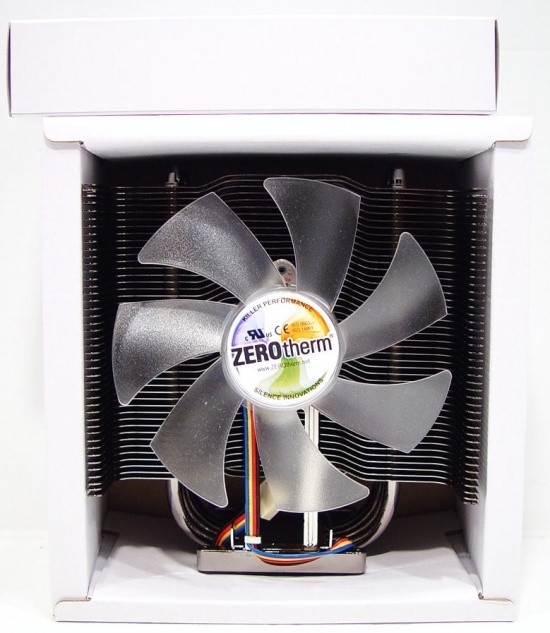 Removing the outer box, you will find the cooler is packed in an inner liner of cardboard. This adds protection during shipping, while also separating the cooler for the hardware in the small box at the top. 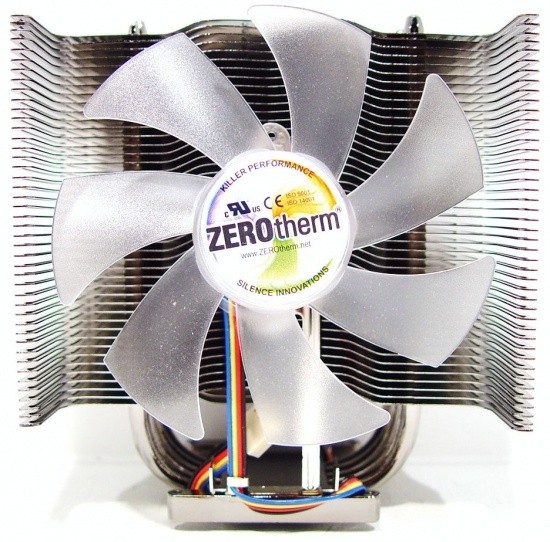 Taking a close look at the workhorse of the NV120, we have this clear seven bladed fan that houses two LEDs in the hub. The fan, while sunk into the fins, still gets pretty good coverage of the main body of forty-four fins. 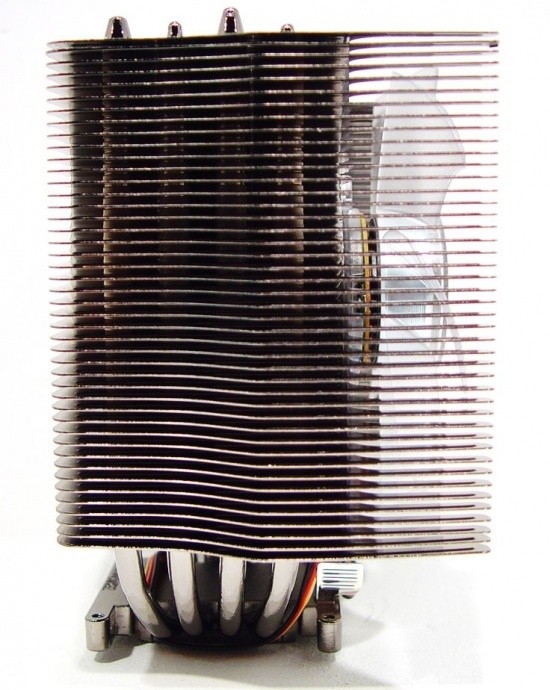 From the side you can get a real look at how well the fan is in-set. This will guard from any slip ups on the sides as well. It's a bit hard to see due to the black look of the coating, but the fins are pressed on to the 6mm, copper heat pipes. 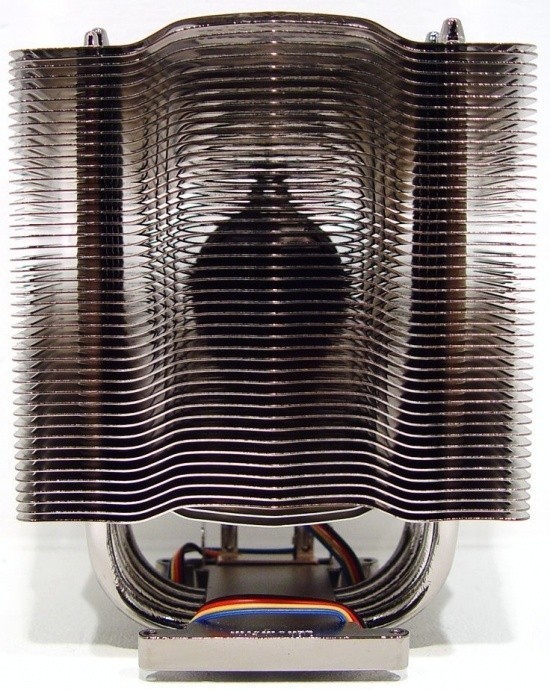 This isn't an optical illusion, the fins are bent up in the main design and there is a bit that is bent down in every fin creating this elliptical effect. This will interact with the airflow and should help direct it to more efficiently use that flow across the fin area. 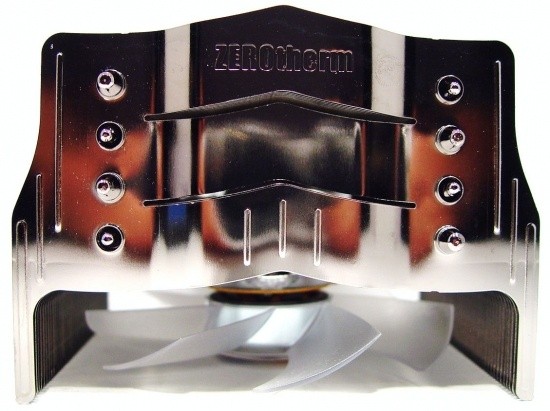 Looking at the top, you can see that bit that is bent down on the fins now. The ZEROtherm logo is formed into the fins, as well as little lines on the outer edges. While these lines are in fact small, they will also react with the flow to aid against flow being lost out the sides. Not as good as an enclosed edge, but better than with them not being there. 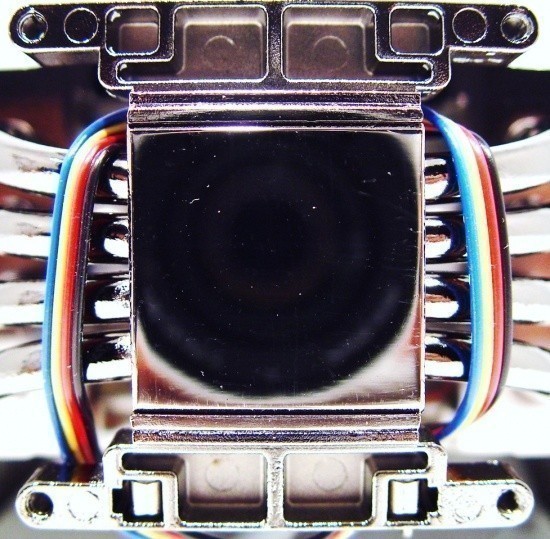 The business end is a copper base with heat pipes coming out of the sides, while a cast piece of aluminium is used for the mounting of the appropriate parts for either AMD or Intel installations. The copper base is coated with the nickel as well and testing against a razor blade was good. The edges were a bit round, but the majority of the middle was flat and level. 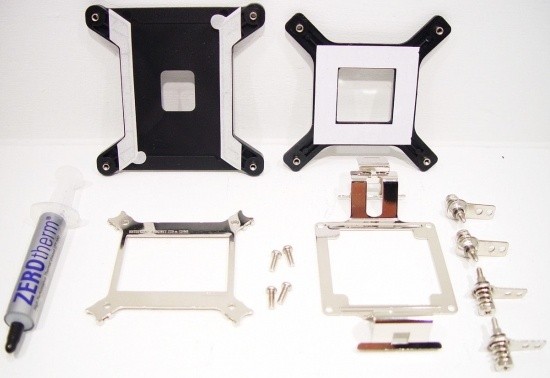 Now we get a look at all the hardware packed into the other little box sent with the NV 120 PWM. In the back are the Intel back plates for LGA1366 on the left and LGA775 on the right side. In the middle, at the left is the supplied syringe of ZEROtherm's own TIM, followed by the top half of the Intel mounting. The screws with the two holed brackets slide under the corners of the bracket and by using the inner or outer holes you are set for 775 or 1366 mounting. In the very centre are the four screws used to mount either the Intel top bracket, or the AMD top bracket to their right. 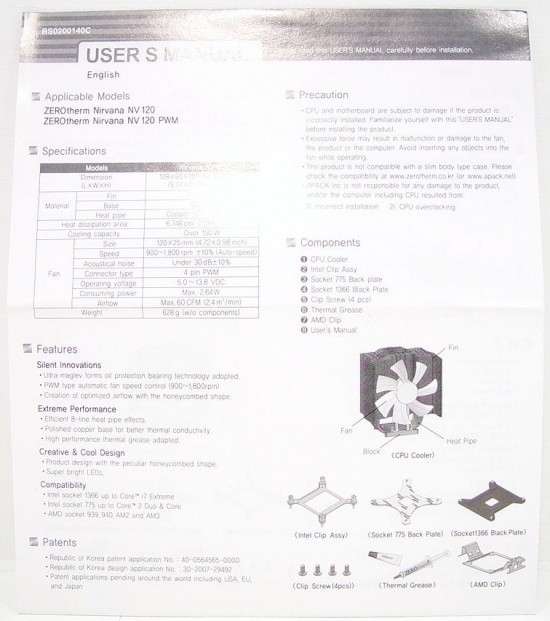 The user's manual is pretty straight forward and simple. ZEROtherm gives you the information about the cooler as well as a parts list to make sure you are good to go with installation. The reverse shows the installation steps, but as you can see, it's pretty simple. Screw in the appropriate plate, add a back plate if required and mount it. 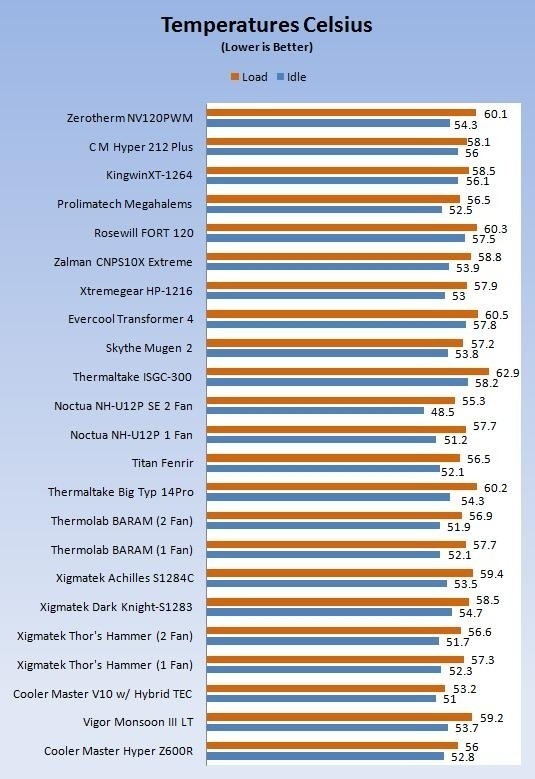 While this isn't the best scoring cooler in the temperature chart, it still performs better than stock and will allow for a bit of an overclock as you can see. I don't think that this would tame a Q9650 or an i7 920 with 4.0GHz plus in mind. The fan just won't keep up with the heat. 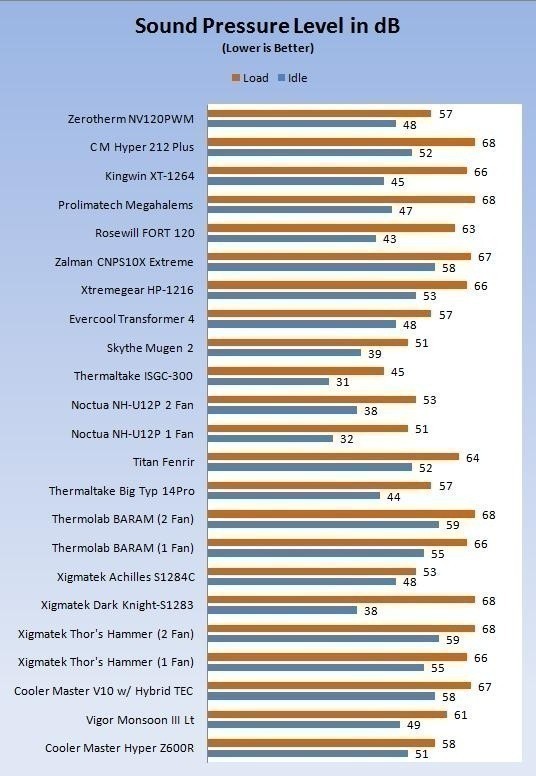 On the quiet end of things the NV120 PWM does come out as one of the better performers. Noctua quiet, this cooler isn't, but not too far from it. Almost inaudible at idle and while at full load it's barely discernable over my graphics cards fan 3 feet away.

Overall I like the looks and style of the NV120 PWM CPU cooler. The nickel coating and unique fin design make this an attractive addition to any chassis. The cooler doesn't do all that bad in testing, but I say it's the low CFM production of the fan. This is the coolers limiting factor. While it is a silent solution, with some coolers you have to give up performance for noise levels and this just happens to be one of those coolers.

While the ZEN series allowed for the ability to swap the fans, with the Nirvana it is going to be a challenging mod for those less mechanically inclined. So if performance is a must over silence, this may not be the cooler for you. If you have a stock build or a slightly overclocked rig that can do it on lower voltage, I say go for it. The NV120 PWM can handle its business, just not as well on the extreme end of things. ZEROtherm does state that this cooler can handle over 150W loads and I don't doubt that one bit, I just think it will be out of most buyers "comfort zone".

Availability seems to be prevalent everywhere else except in the USA where this cooler is virtually unavailable at this time. All I can say is that you need to Google shop this cooler for your best deal, as I was seeing prices varying greatly from store to store in both the EU and AU markets. I guess we just have to wait in the U.S. and see where the pricing ends up at more respected E-tailers. The $77 dollar price I feel is way overpriced in my opinion for the results I got with this cooler.