Augmented reality is not a new concept, it has actually has been around for many years in one form or another. To the best of my knowledge it all started with the stereo spectroscope. This allowed people to view flat 2-demensional images with a semblance of depth and made the pictures more vivid and life like (well, as vivid and life like as a black and white photo can be).

Today augmented reality comes in many, many forms, but they're still not much more than methods for tricking the eyes. One of the most popular has been the introduction of AR (Augmented Reality) eyewear for gaming. These follow normal lines and allow for either enhanced viewing, 3D viewing or some combination of the two.

Vuzix is a company that has put a lot of time and research into this technology for the military and for the consumer. We have had the chance to play around with a pair of their AV310 iWear for about 30 days so that we can tell you not only how they work, but if they are really worth it. Read on to find out!

The Vuzix AV310 iWear comes in a decent looking box. I can say that my first thought on seeing it was that they'd gotten Zachary Quinto (who plays Sylar on Heroes) to model the glasses. But this quickly passed and I started looking at what the box was actually trying to tell me.

Looking at the box, it would appear to claim that the AV310 simulates the experience of viewing your video content on a 52-inch 16:9 monitor. That is quite a claim to be honest and one that I fully intended to verify.

Moving around to the back of the box, we find a decent amount of "hard sell" and actually useful information. There is also a nice image of the "loot" contained inside.

Upon opening the box, we find the Vuzix AV310 lying exposed right under the lid. Now, normally I would not cover the position of where the hardware is, but this seems a little dangerous to me. The card board of the box is not the most secure and I could see these being easily damaged in shipping. Vuzix should consider a more secure form of packaging.

Once we got over the shock of having the AV310s exposed to potential damage, we were pleasantly surprised with the amount of accessories that Vuzix has put in.

Besides the AV310 glasses there are two adapters, one for an iPod/iPhone and one for RCA input. This allows for a wide variety of input choices and the only one missing was for a standard PC, a VGA + 1/8-inch audio plug would have been nice.

Other items include one neck strap, one soft cloth bag, an instruction manual and an AA battery. There is also a note explaining that Vuzix is no longer providing an optional nose piece.

The actual AV310 Widescreen Headset is not a pretty thing. It is not ugly per se, but more along the lines of awkward and kind of goofy. My wife's first comment was "you look like a real geek now". This was followed by a few amusing comments from my kids that are not suitable for publication.

When you first look at them you get the impression that they will feel heavy on your face and you would be right. They also feel very clumsy. This is mostly due to the way the arms are designed. Vuzix meant them to be able to tilt the display head so that it can sit in the best viewing position on different users faces. However, what ended up happening is that the arms tend to bend slightly at random and all of the stability control ends up being on the sides of your nose.

Taking a look at the display head, you can see the nose piece is very small and made of thin metal. There are pads on the side but they are not much help during extended use. There are two lenses on either side of the nose piece. Each of these can be individually adjusted to suit your eyesight. It is unfortunate that they cannot be adjusted for width, but I think that would overcomplicate the display head and add more weight.

The arms are not much better here and simply extend straight back with only a slight curve to them for comfort. There are also a pair of removable ear-bud style head phones to allow for a private experience.

Under the left hand arm is a cable that extends out of the battery compartment/control unit. This is a small cylindrical piece that holds the single AA battery needed to power the AV310. There are buttons for power, stop and volume up and down. This is also where you would plug in the connectivity adapter for your device.

For Apple devices you use the standard iPod connector. On the back of this is a mini-USB port. This allows you to charge your iPod/Phone while using the Vuzix AV310.

One problem we ran into right away was our inability to use this with our Otterbox Defender for iPhone case. The connector for the iPhone/iPod is simply too bulky to fit. In the end we had to remove the iPhone from the case to use the AV310.

For most other devices a standard Video + stereo component connector is used.

The features that the Vuzix AV310 has are nice, but there is really only one that is noteworthy.

This feature is the ability to handle 3D Gaming and Video playback. The rest; 16:9 and 4:2 viewing, color and contrast control are all what you should have in display goggles.

Measuring the performance of a display device that sits on an individual's head is not an easy task. We were not completely sure how to approach this one. In the end we decided that taking a more subjective approach would be best.

For testing the Vuzix AV310 we used four test subjects, two adults and two teens (including myself). Each subject would view two videos; one, a TV pod-cast (Dirty Jobs), while the other is a movie from iTunes (Push). This would be done from an iPhone 3G S. Each subject would then describe what they thought of the AV310. For starters, let's see what the kids think about the AV310.

We also decided to hook the Vuzix AV310s up to our Wii for a little gaming action (Super Mario Galaxy).

Our first teen subject felt that the Vuzix AV310 headset was awkward to wear. They felt like the headset was always going to fall off. Although they liked the video and thought it was really cool, the amount of light that comes in around the side was annoying. Teen - 1 also stated that the earbuds were not very comfortable. Teen 1 did not like gaming on the Wii with the Vuzix, saying it was very hard to figure out where you were pointing without a visual reference.

Our second teen subject did not find the AV310's as uncomfortable, but did think there was too much light to make viewing easy. Teen - 2 felt that it was difficult to get the image focused properly, but thought otherwise the viewing experience was good. Teen - 2 loved gaming on the Wii and said it was one of the coolest things they had done. It took me a while to get the AV310s back from Teen - 2 during the Wii gaming tests.

Our first adult subject liked the AV310s and thought they would be great for long trips (such as in a car or on a plane). Adult - 1 also was disappointed by the amount of light allowed in by the AV310 and that the audio experience was not as good as it could have been. Adult - 1 found gaming on the Wii fun, but said it was not something they would see themselves doing on a regular basis.

Personally, I feel that the advertising is a little misleading. The box states that you get the experience of a 52-inch 16:9 widescreen TV as viewed from 9-Feet. This is simply not the case. I own a 52-inch TV and sit a little over 10 feet from the screen. The two experiences are nothing alike. After about 30 minutes I also began to get a headache from the need to focus on the tiny display. I tried adjusting the focus individually for each eye in case this was the problem, but that had no effect. The nose piece was a source of discomfort, as was the need to constantly adjust the headset due to slight slippage. Gaming was fun, but I just can't see it working for many games like Wii Sports, Wii Fit, or EA Active. If you are stationary (i.e. sitting) it is great, but for any game that requires movement they just do not work.

The Vuzix AV310 Widescreen is an interesting idea. It brings back the idea of stereoscopic viewing and does a fairly good job of implementing this in a small and light device. Where things fall apart is in the seemingly rickety construction, awkward styling and uncomfortable fit of this device. The misleading marketing will also lead to many disappointments, as wearing these is nothing like watching a 52-inch 16:9 wide screen from nine feet.

Some users may also end up with slight headaches due to the need to focus on the display at such a short throw range. The need to remove your iPhone from certain cases to use the Vuzix AV310 Widescreen was also a big annoyance, as was the amount of light that gets in around the sides. Vuzix does have an optional accessory for this, but at an MSRP of 249.99 U.S. Dollars for the headset, paying another $15 for something that should be included is a little much.

In all, the Vuzix AV310 is not really worth the $249.99 you would have to pay to get this. It cannot replace a computer monitor for gaming and it does not do a great job for console gaming either (although it is kind of fun). This leaves the single use of video from a PMP. If that is its sole function then we cannot justify the high price tag. When you add in the extra hassles of intruding light, awkward feel when wearing and a rickety feel to the product, it only serves to make this more apparent. 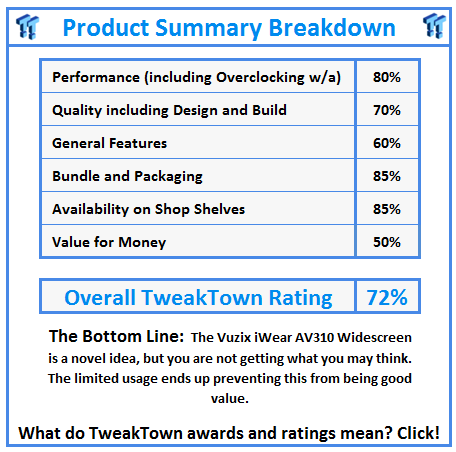